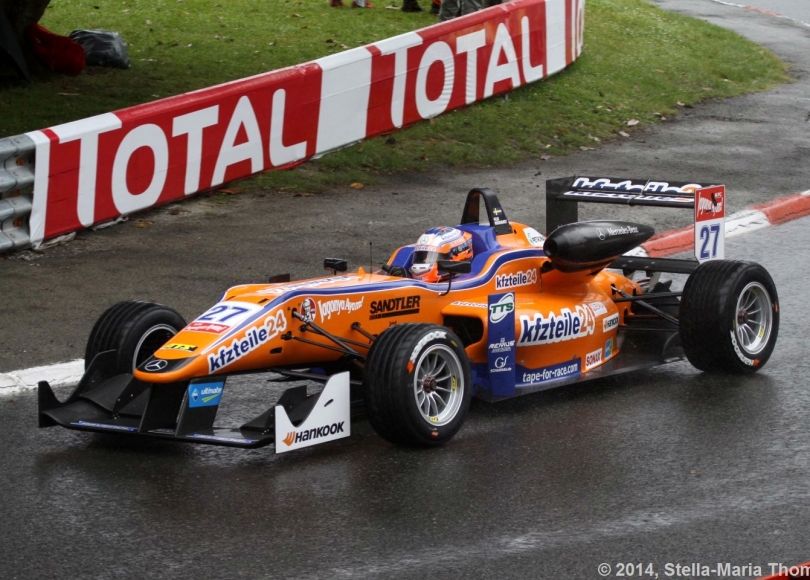 Race Report – Round 9 (Race 3):
At Pau this afternoon Felix Rosenqvist’s fortunes finally took a turn for the better after what has been a dreadful start to the season for the kfzteile24 Mücke Motorsport driver. Winning the 73rd Grand Prix de Pau must have gone some way towards compensating him for the way the fates have messed him about this year. Second place went to Esteban Ocon (Prema Powerteam), the rookie hanging on to the leader but never quite able to find a way past. 3rd place went to the winner of this morning’s wet race, Tom Blomqvist (Jagonya Ayam with Carlin) after yet another tussle with fellow Carlin runner Jake Dennis.

Right from the start Rosenqvist was taking no prisoners as he streaked off the line into the lead, getting the drop on pole-man Ocon who made a poor start and then almost took Max Verstappen (Van Amersfoort Racing) out of contention. What followed was a race with a lot of position changes, but mostly through accidents rather than overtaking. Back in the pack it was chaos even before the first corner, Gare, when Richard “Spike” Goddard (ThreeBond with T-Sport) got pushed wide and ended up in the wall on the outside of the track.

A corner later and Alexander Toril (ThreeBond with T-Sport) also came a cropper in the same place he had crashed out of the first race when he appeared to tangle with Tatiana Calderon (Jo Zeller Racing) and came close to being launched again. In the third corner, Michele Beretta (Eurointernational) went off but was able to get going again, as did Hector Hurst (Team West-TecF3), while Gustavo Menezes (Van Amersfoort Racing) got nudged into the barriers and limped round to the pits to retire.

When the dust settled it was still Rosenqvist leading, from Ocon, and Blomqvist who had taken advantage of the Ocon/Verstappen incident to nab 3rd, just ahead of his new best friend, Dennis who would not be shaken off. Verstappen dropped to 6th behind Mitch Gilbert (Fortec Motorsport) as a result and shortly thereafter crashed into the wall and out of the race. Two laps in and there were only 20 cars left in contention but at least we didn’t have a Safety Car.

As Rosenqvist began to try and open out a gap over Ocon, the French youngster was shown the black and white flag for what was deemed a dangerous move on Verstappen, no matter that it was inadvertent. Meanwhile, Lucas Auer (kfzteile24 Mücke Motorsport) was glued to the rear end of Gilbert, now that Verstappen was out of his way. Back in the pack Jules Szymkowiak (Van Amersfoort Racing) passed Calderon for 18th and Felix Serralles (Team West-TecF3) dropped a parcel of places just as Sean Gelael (Jagonya Ayam with Carlin) pulled into the pits and out of the race.

It became rather processional after that with Rosenqvist setting the fastest lap of the race as he finally started to pull away from Ocon, a feat made far easier when he realized his pit limiter was on and he was thus losing ground in the Lycee Hairpin! Blomqvist in 3rd was also able to begin to put some distance between himself and Dennis, the latter just about clear of Gilbert, who really had his hands full with Auer.

Meanwhile, early-season front runner Antonio Fuoco (Prema Powerteam) was up to 14th having passed Riccardo Agostini (Eurointernational), the latter going off at Gare not long after this. The next raft of changes came when Nicholas Latifi (Prema Powerteam) found he might have been better off staying in bed this morning. The Canadian pulled into the pits, abandoned ship and went to slump on a pile of tyres, a picture of abject misery. Presumably the electrical gremlins that caused his non start in Race 1 had struck again. He appeared inconsolable. Another man off was Hurst, but at least he wasn’t out.

At the restart there were 10 laps left and just over 10 minutes, which suggested we still wouldn’t get a full distance race but at least we might get close. Rosenqvist had to work really hard to hold Ocon off at the restart, but hold him off he did, and for the remaining nine laps he continued to do so, coming home as only the second Swedish driver to win this event, the previous one being Reine Wissell in 1971! Ocon could only trail him to the finish line, while Blomqvist did his best to keep up, finding he couldn’t quite match the pace of the lead duo. Dennis was still 4th, helped by Auer again attacking Gilbert for 5th. Gilbert’s resistance was determined and effective. It was his place. He was keeping it, thank you very much. The situation from Gilbert’s point of view was much improved when Auer suddenly found that everyone behind him was much closer than he liked and he had to concentrate on his own defence.

Everyone now seemed to have settled down though, and Rosenqvist was able to run to the finish relatively untroubled, where he was rewards with Grand Prix winner’s trophy, a €5,000 watch and 25 points for the win.

Afterwards Rosenqvist, suffering from some nasty blisters to his right hand, was very pleased to be back on winning form. “I noticed it wasn’t too smooth but we had the speed all the time. We had a little problem with the engine in qualifying and a little incident in race 2 but now we are back on track and happy to win this race. I was under a lot of pressure from Esteban into the hairpin and was hoping I had no problem. I was pushing every lap. It was a really long hard race but thanks to the team for everything. I’d been having start problems due to the new clutch and engine but when we needed to, it was there. Usually after a safety car you can pick up some dirt or something and the restart was not the best but Esteban was not so good as well. It’s been a long uphill climb but we have to start somewhere.”

Ocon knew he’d lost out at the start: “I missed the start so Felix passed me. I was a bit quicker in the beginning and he was on the limit so I tried to put the pressure on. I almost got past but he took it back again. After the safety car I got a good restart but he also did really well and it’s difficult to pass here.” As for the accident with Verstappen: “After I hit Max I didn’t realise I had any damage so it’s good to be in the points.”

Blomqvist too was happy to be second in the title chase, 56 points behind Ocon: “I made a very good start, and Esteban went wide a bit at Gare on the first lap. I was good too but not as quick early on but then we stayed constant. After the Safety Car my restart was not great but I think we were low on pressure so we struggled a bit more. But I’m glad we are back to where we should be and there’s no reason why we can’t take some more points now.”

4th went to Dennis, ahead of Gilbert, Auer, van de Laar, Bryant-Meisner, King and Giovinazzi. Fuoco finished outside the points in 11th, beating Guimaraes to the flag. 13th was Serralles, from Szymkowiak, Calderon, Nissany, Jones and Hurst who finally finished 18th, a lap down.

Rosenqvist also claimed the fastest lap of the race.