Friday was the usual routine once we made it to the airport – we headed straight to the seafood place for a meal, then walked to the gate just in time for our flight to Düsseldorf. At the other end it was a quick drive to hotel from the airport, though it would probably have been quicker if we could’ve read the street signs better. Anyway, we found the Holiday Inn eventually – the large illuminated green signs really help! After that we checked in to one of the biggest rooms imaginable, and unpacked, before going to the bar to get a nightcap. After that it was midnight so bed and sleep were all we wanted.

On Saturday morning we breakfasted late – at ten – then dressed and got made up ready to go out of the door. We pointed the A-Class Avis had given us out into the streets of Essen and set off in search of the wedding, which was going to happen about 5 miles from the hotel in the Essen-Kray Rathaus, a remarkably fine building (built in 1908) in an otherwise non-descript sort of neighbourhood, just off the motorway.

We sat on the benches outside in the sun while we waited for the rest of the party to show up (in between taking photos of some of the detail of the buildings and of the flowerbeds, which were still full of dahlias in rich colours). Eventually the car arrived with Mark and Simone in it, a small dark vehicle, nothing too fancy, but with red and orange ribbons festooned all over it. The ceremony itself was held in a very nice, sun-filled wood-panelled room, decorated in autumn colours by the indefatigable Andrea, who was apparently in charge of everything, and was doing an amazing job. She certainly seemed to have organised unseasonably gorgeous weather, with the sun shining in a clear blue sky, and temperatures at an unexpected 25◦C, a whole lot more (by about ten or more degrees at least) than you would expect in Northern Europe at the end of October. Most people were looking slightly hot-and-bothered, having dressed for an autumn/winter wedding. I’d seen the weather forecast well in advance, is all I’ll say. The wedding service was quite quiet, with the registrar saying some very moving words, but being pretty inaudible if you weren’t near the front (I was near the front because they left space on either side of the table for the photographers). Afterwards, we drank champagne in a side-chamber, and then we all loitered around on the steps being photographed.

Tony Schmidt, one of Mark’s drivers when he worked for GM Motorsport, turned up with his girlfriend Sarah, and spent a lot of time muttering about how weddings made him depressed, in between teasing Sarah by saying he was never going to get married. She didn’t seem too impressed, but she obviously wasn’t too surprised either. In addition, Michael Ruehs (who runs Formula3.info, among other things) was one of the witnesses, despite the fact that he was supposed to be flying to Sydney on Sunday morning, since he’s somehow got himself involved in the Czech A1GP team. Of course that meant his partner Reike was also there, as of course was Mark’s Dad, Ted, who we know from racing too. It was a very relaxed affair, and we all eventually drifted away around 2 in the afternoon. Lynne and I went back to the hotel to relax a little, intending to get some lunch. We wandered off in the wrong direction to begin with, and then couldn’t figure out the underground system, but we made a reasonable guess and ended up on the edge of the town’s shopping area. It was deeply uninspiring, and seemed to be full of little apart from discount stores and Turkish kebab cafes, none of which really appealed. We eventually blundered across a square, with some pavement cafes, and did the very German thing of drinking coffee and eating apple cake, before we staggered back to the hotel by way of Karstadt, where we bought a new road atlas of Germany, and some cheese for my Dad. Then it was time for a shower, a change of clothing and the hunt for the evening party. As it turned out, it wasn’t too difficult.

We made it in good time, and got introduced to one of Mark’s other drivers, Chris van der Drift and his parents, Janet and Tony. Technically they’re New Zealanders, but they now live in the Netherlands. Now I have to say that most drivers are very wimpish when it comes to drinking, and they’ll fall over after a couple of beers. Chris most definitely doesn’t fit in that category. His capacity for drink was positively terrifying… So was the stuff that he and the others were drinking. Lynne and I started on champagne, and shifted to rose wine with dinner; and stayed with rose wine for the rest of the night. The others were drinking beer but alongside it glasses of some gruesome Italian Martini-type stuff (Ramazzotti), dark brown in colour, and that smelled awful and tasted like cough medicine. Despite the fact that the waiter kept bringing enough of them for everyone on the table, we just ignored them and they eventually went away (someone drank ’em; it may well have been Chris!). Anyway, it was a good evening, with lots of gossip, lots of dancing and lots of drinking. At about two thirty only the motor racing people were left, which should probably not come as too great a surprise to anyone. Anyway, I was starting to find breathing rather difficult with so much cigarette smoke around, so I gave up and we went back to the hotel, grateful for the fact that the clocks were to go back an hour that night.

On Sunday we slept late, and took our time getting up and out the door. The hotel staff had reprogrammed the clocks in the rooms remotely during the night, so we were a bit later than we intended to be. However, it was still not quite noon when we finally checked out, and headed off to see if we could find somewhere nice to have lunch. After a certain amount of driving round in circles we found the Villa Hügel, originally the property of the Krupp family, and after a drive through the amazing parkland that surrounds the place, we blundered across the Hotel Parkhaus Hügel, formerly a casino for the Villa, but now a charming hotel and restaurant, with a terrace overlooking Lake Baldeney. We got a table outside (yes, it was still that warm), and had a lunch that will stay in the memory for a very long time.

A glass of white wine served as an aperitif, followed by a plate of freshly-baked bread (walnut, white with a wonderfully crisp crust), and olive oil and butter. For starters, Lynne had a wild mushroom “tiramisu”, which was wonderful, while I had a mini-trio of three of the four starters. I too had the mushroom tiramisu, as well as a quail’s breast wrapped in a potato crust, and a chicken liver mousse in the thinnest of pastry cases. They were all three of them utterly wonderful, and they arrive looking very pretty on a three-tiered plate, rather like a very small cake stand!

For our main courses we both opted for the venison ragout. It was tender and melted in the mouth, and was served with yet more wild mushrooms (you can never have too many mushrooms), and rösti made with grated potato and pumpkin. The wine was a red from the Ahr valley, and went very well with the meal. 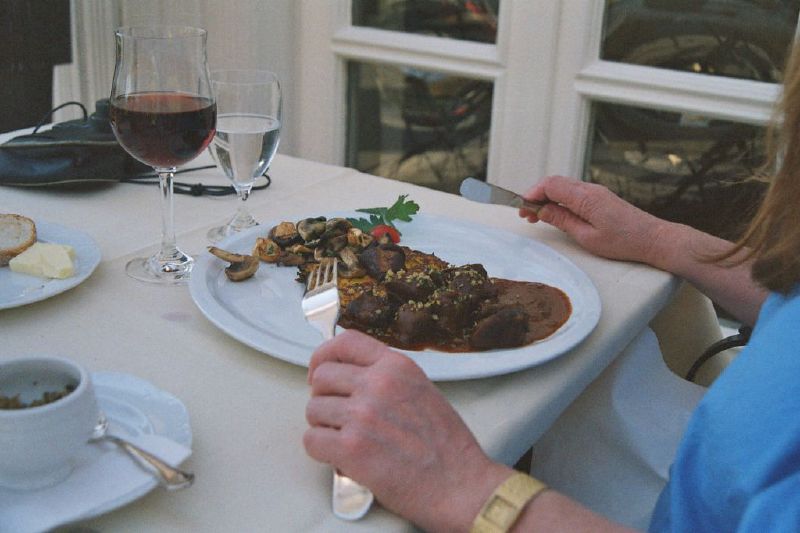 Our waitress was charming and funny, and no one rushed us. We finished off with a pineapple and ginger risotto, made with Thai sticky rice, and plums gratinated with a creme Anglaise sauce and walnut ice cream. It was all amazingly good, and nowhere near as expensive as it would have been in the UK. Afterwards, we took a walk by the lake to aid digestion, then headed for the airport and flew home. 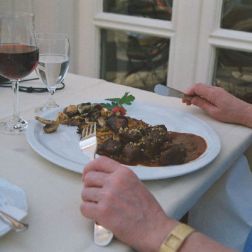 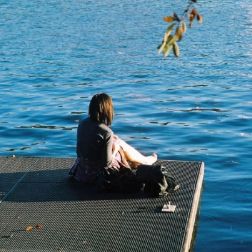 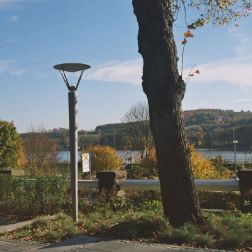 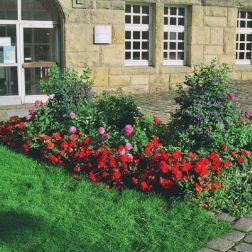 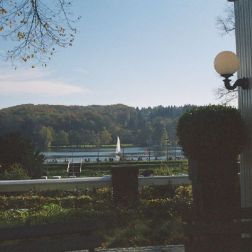 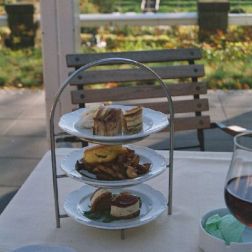 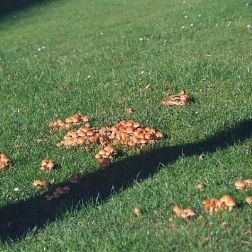 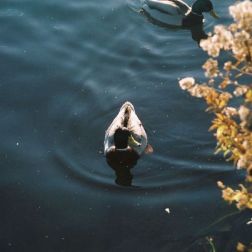