The heat continued somewhat abated into Saturday and we all ran round like headless chickens despite the fact that in theory there wasn’t that much left to do. Mind you we hadn’t been helped in the morning’s race by a series of short but annoying power cuts that left us all confused when it took out the TV coverage, the timing screens and the commentary – there was a brief discussion as to whether we were going up to the roof again to opt for the string and tin cans (or at least the “Jeff’s mobile and a dustbin”) method of working but then things came back. Of course later it also plunged the press conference into darkness for a minute or so leading to some consternation on the part of the assembled drivers – remarkably, when the light came back up none of them had wandered off! After some photography on the roof – and a conversation about how I never got paid for a piece I did for the Bahrain Circuit management about three years ago which caused Bahraini driver Salman Al Khalifa to be outraged on my behalf, I thought I’d nearly finished. I was wrong. I was halfway through typing up my race report when I got mugged by the guy who was supposed to be photographing the GTs when he discovered he hadn’t actually got the correct pass to get onto the grid – so could I please get down there and do the job instead? I did – though not without having to go back to the press office when the idiot goon on the gate to the grid told me I couldn’t come through despite having full track access (as stated on my pass) and a photographer’s bib. He wanted an SRO pass… He wasn’t about to get one (I’d left it at the hotel – so there wasn’t exactly time to go back and get it). A phone call from Jacquie to someone somewhere sorted it out and I wandered into the mayhem that was the grid. I swear every man – and woman – and his/her dog was down there. I had no idea who or what I was looking for specifically, so I just randomly shot stuff, figuring I’d try and identify the drivers I didn’t recognise later where possible. It did result in what I think is a rather good shot of someone who turned out on closer inspection to be Markus Palttala…

Of course there was then no trace of the bloke I was doing the job for so after an annoying half hour waiting around to see if he was going to magically re-appear, and after discovering that no one who might know who he was or how to get in touch with him was around, we FTPed the stuff directly to the photo editor and decided we’d had enough. Besides, it was getting odd out there – we’d just been alarmed by a jazz musician and I wasn’t keen to find out if there were more of them! 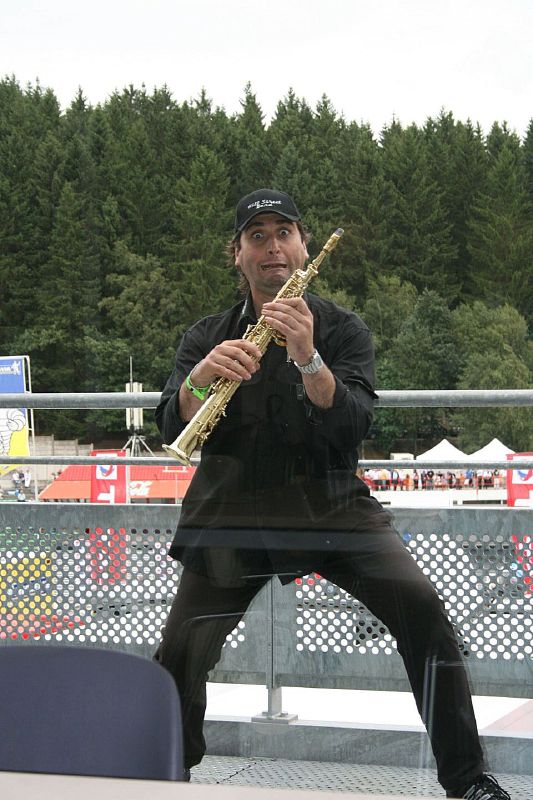 Anyway we were hungry, it was late and the weather had broken spectacularly. The GTs were slithering off here, there and everywhere, and we wanted to go back to the hotel. More importantly, we also wanted frites, and we wanted them now. The cafe on the inside of the circuit was heaving, so we made our way towards the car park, stopping off at the outside cafe – where we once memorably got hideously drunk with a bunch of insane middle-aged Finns (the worst sort usually) – and stopped there for one last portion of Woopy Snacks frites with sauce Andalouse, before we staggered back to the hotel. By the time we’d showered/changed for dinner it had stopped raining, so I wandered outside to take a few photographs of the spectacular flower displays that abound in Ligneuville (the self-styled “Capitale de la Truite”):

All that was before we sat down to a splendid dinner featuring the aforementioned trout: 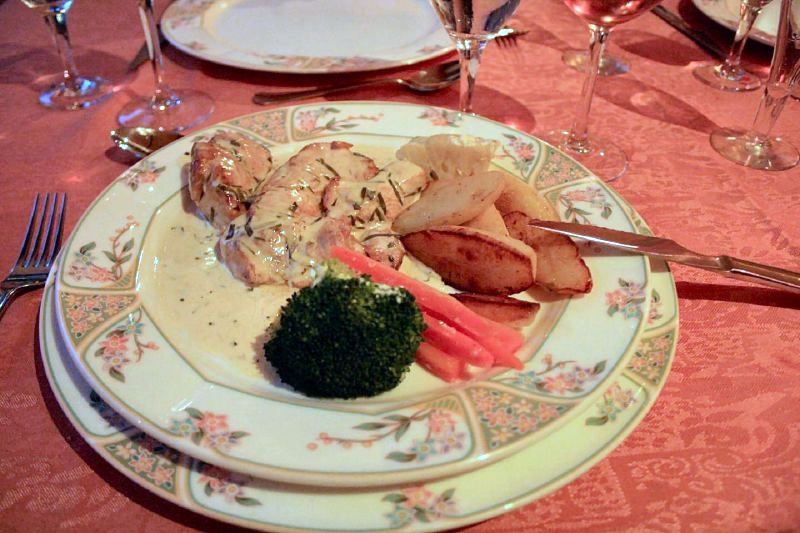 And a creme brulee.

Edgard tends to keep it simple, but the ingredients are good and his cooking can’t be faulted. We staggered off to bed stuffed full of food and slept well.

On Sunday we had to head for home, but not without stopping off for lunch in Brussels. I’d booked a table at les Trois Couleurs in Auderghem and despite the best efforts of our SatNav system to lose us in Liege we got there in good time for an excellent lunch. After a moment or two of contemplation – and a kir royale each – we opted for the menu celebrating 30 years of the restaurant being in the hands of the same chef, the splendid José Tourneur. We started with an amuse bouche of scampi, fish pate, and some duck “ham”, which simply set the tone for what happened during the rest of service.

The bread rolls were sublime, served with some creamy, unsalted butter and it was hard to resist eating too many of them, but we tried, not wanting to fill up too soon!

The actual lunch started with small but perfectly formed baby lobster, a salad of young shoots, and cream of parsley dressing.

This was pretty wonderful and I could quite happily have eaten it all lunchtime, but they had more with which to amaze our taste buds. Next was a cream soup of petites grises (small shrimps), which was also wonderful, rich and dense like a very, very reduced bisque. 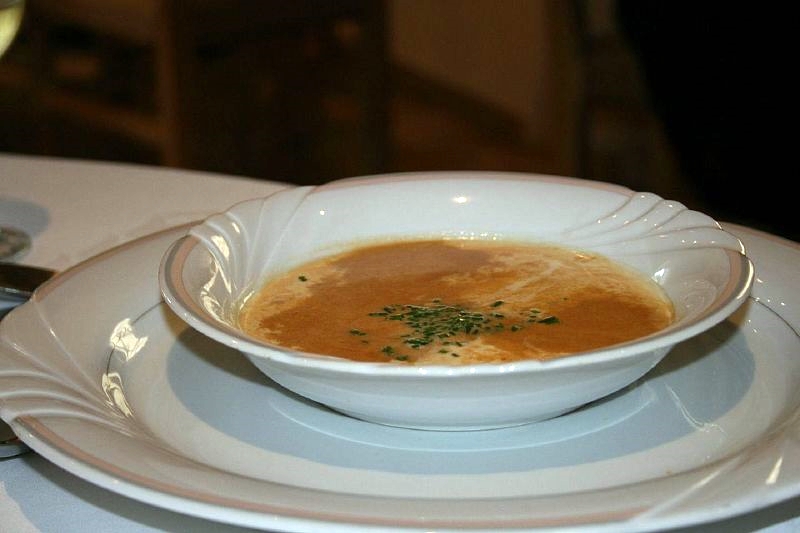 The piece de resistance was pigeon, a speciality of the house anyway, that was absolutely perfect in every way. The legs had been roasted but remained tender and easy to deal with, wrapped in a tiny piece of foil so you could easily pick them up to gnaw the last shreds of meat off the bone, and the boned breasts were just right, pink and tender and tasting wonderfully of the marinade with just a scattering of sea-salt to crisp up the skin.

The tomato sorbet served prior to the pigeon was an interesting juxtaposition of sweet and intensely tomatoey, with little pieces of sun-dried tomato studded through it – it was odd but wonderful and I must see if I can create something similar – though I seriously doubt I could make it as good. 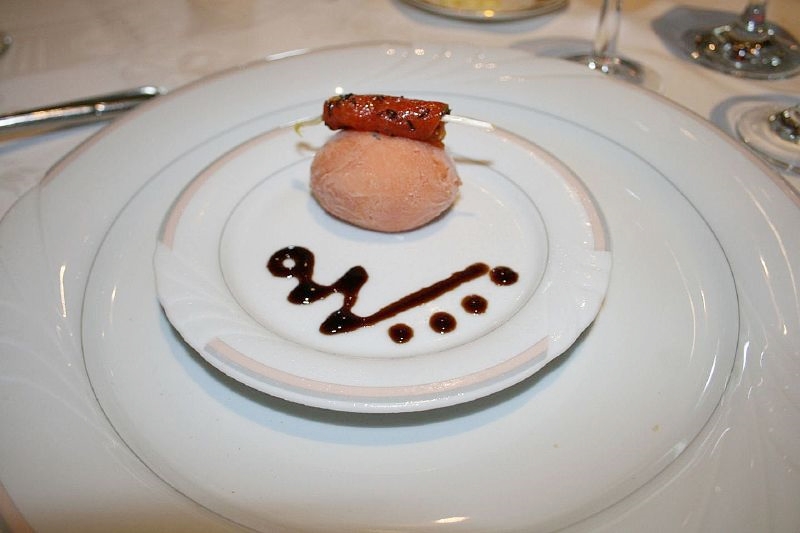 We finished with a dessert of melon “snow”, red fruits and sorbets, fresh, refreshing and sharply flavoured, the perfect way to end a stunning meal. 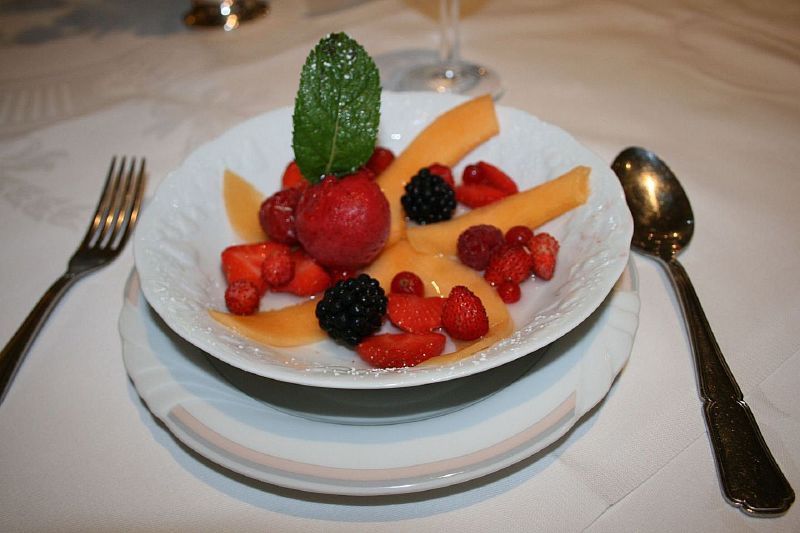 Except of course they then inflicted a plate full of petits fours on us, and it would have been rude to refuse (actually, it would probably have been impossible to refuse!) which went down well with the mint tea I went for instead of coffee. 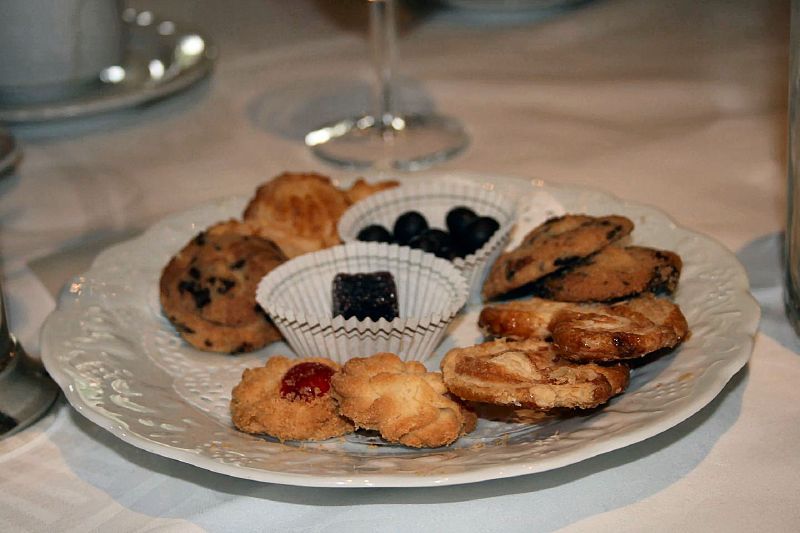 We rolled out of the restaurant almost four hours after we’d arrived in need of nothing more than a smooth flight home and a long sleep. We dozed in the business lounge, and dozed on the way home, getting a good run back to London and a reasonably early night after all the travelling. And also on the plus side, I accepted the chicken salad sandwich bmi insisted on serving, took it home and used it for Monday’s lunch. One less thing to do on reaching home.