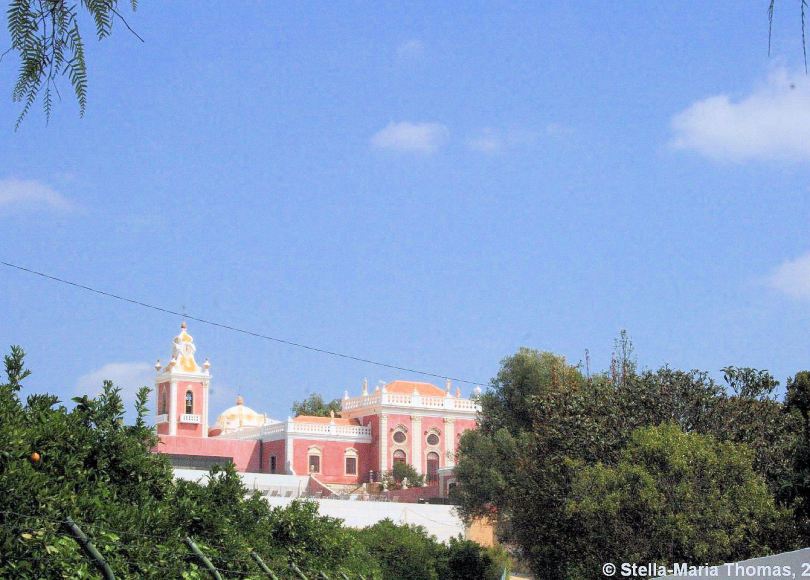 Monday morning we were in no hurry at all to do anything or go anywhere, apart from needing to check out of the Globo by noon. We had a leisurely breakfast, packed slowly and were ready to go by 11. Bills paid and car packed we took a drive inland to the old town of Silves, to have a leisurely nose around, and maybe visit both the cathedral and the castle. A short drive into the hinterland and we were there, parking up in the old town, just at the bottom of a short slope to the castle entrance, and behind the cathedral. We clambered out, grabbed cameras and guidebooks and set out to investigate, only to find that no matter which side of the cathedral we were on, none of the doors were open, despite what the Michelin Green Guide to Portugal would have us believe. This – we would discover – is something of a problem in Portugal, or at least in the Algarve. No matter how famous the church, or how supposedly worth a visit it is, and no matter what the published opening times are, you’ll find the building mysteriously closed… So, no luck with the cathedral, a pity as we’ll never know if it really is the main Gothic monument in the Algarve or not. We did at least get to look at the church opposite, with its door set high off the ground so that coffins could be unloaded easily from carts when necessary.

Anyway, having been defeated on the ecclesiastical front, we decided to move on, stopping at the touristy shop at the top of the hill, where Bogusia bought some really sweet silver earrings, and then checking out the castle. This is a vast complex, of Moorish construction originally, situated as all good castles should be, on a hill affording a clear view of the surrounding countryside. The walls are perhaps not as high as some northern castles, but are still mightily solid and clearly survived the 1755 earthquake without too much damage. The interior complex is intriguing, especially as excavations are still going on all down one side of the castle. 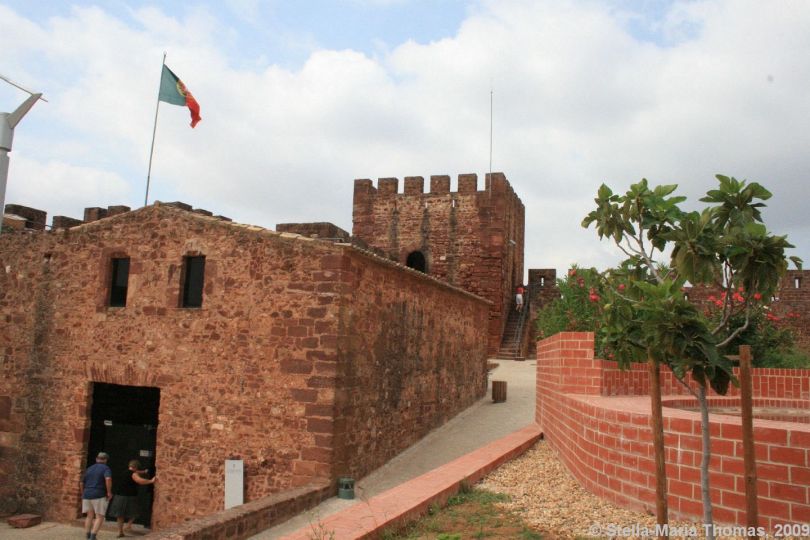 Additionally, recent work has seen a reconstruction of the gardens along Moorish lines, with lots of watercourses, pools and fountains. 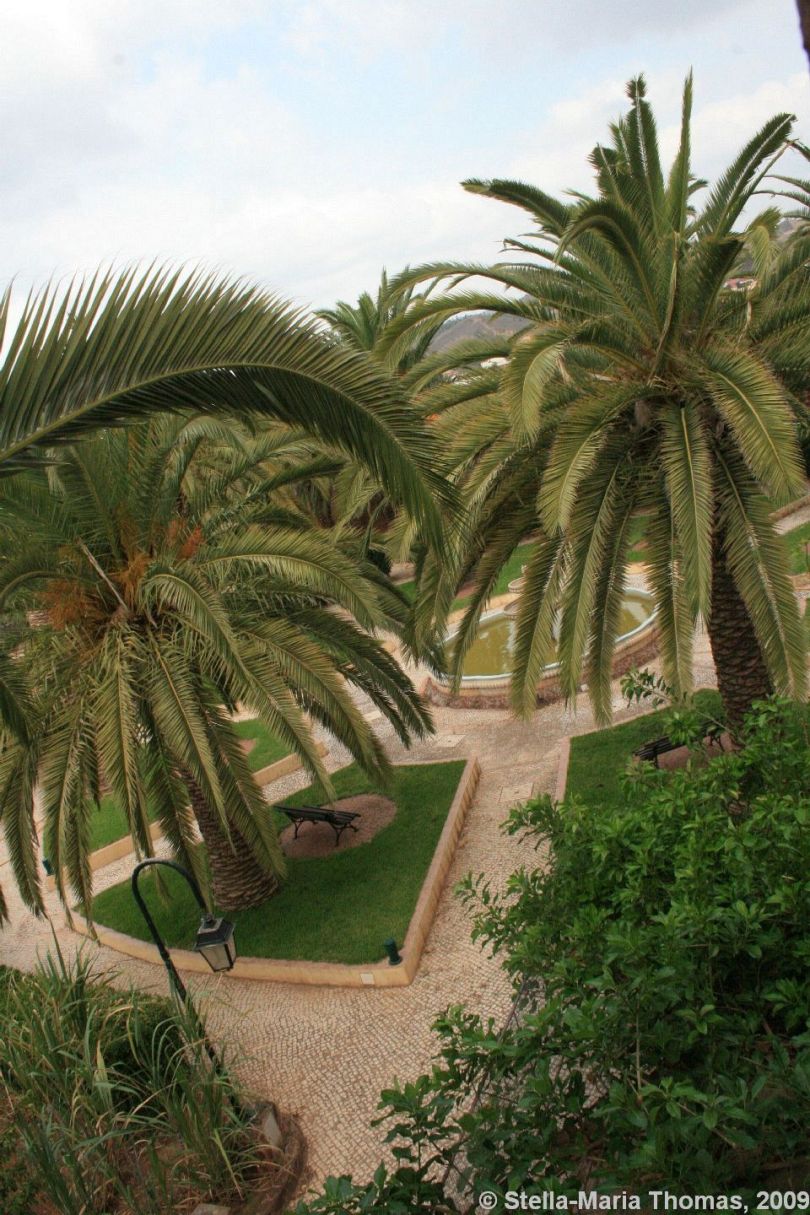 In the middle is an oddly attractive new café/restaurant of wood and glass, the glass providing some stunning reflections of the fortified outer wall. 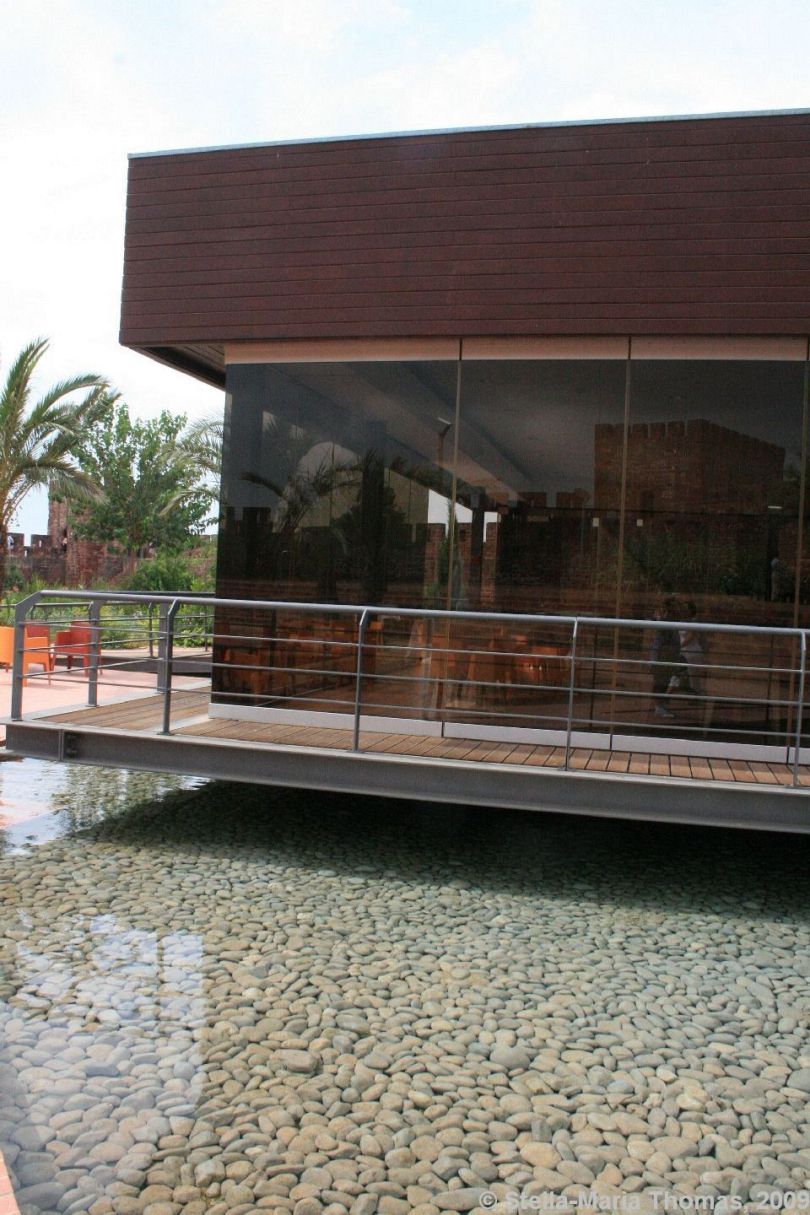 There’s also a small but interesting display of finds from the ongoing archaeological dig, though some context would have been interesting, as would a guide in anything but Portuguese. To be fair, the very pleasant woman manning the cash desk on the way in said if we wanted to know anything we should just go back and ask her, but that’s not quite the same. Anyway, we struggled through the text figuring out what we could, and interpreting the rest based on a lifetime’s wandering round historical sites in the rest of Europe. After a thoroughly satisfying nose around, we decided we needed a lunch break so walked down the steps towards the car, stopping off at the Café Ingles, which – after a round of very large beers (a lovely cool litre of Sagres) – provided two splendid pizzas (lovely thin, crispy base, Portuguese chourico and plenty of cheese) between four of us, and then an enormous ice cream each.

As we sat outside enjoying our desserts, the weather started to shift slightly, with a clap of thunder and a brief shower that was enough to drive us indoors. Eventually it stopped, so we paid our bill and then strolled on, heading for the Roman bridge and the market area, just to see what else there was to see in the town. We passed along some lovely old streets…

…and then stopped at the beautiful little square by the remaining old town gate. 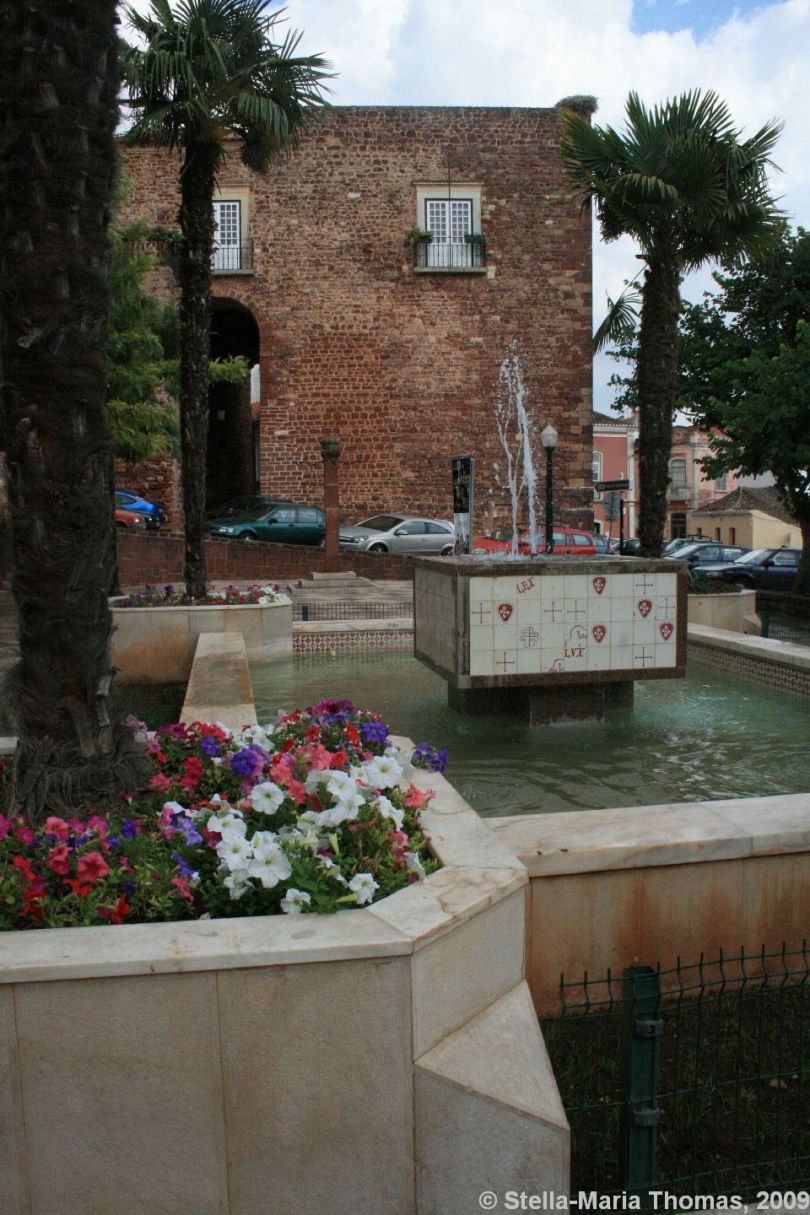 A fight with the Portuguese post office (and its stamp dispensing machine) later and we were ready to head for our new hotel via another lovely square (albeit with some very odd statues in it).

And that was when the weather got spectacularly nasty. The sky darkened, it started to drizzle, lightning flashed around the hill, and the castle, and then the heavens opened, drenching us all to the skin in seconds.

Bogusia and I found a doorway to wait it out in, while Glyn and Lynne bolted into the shop at the top of the hill. As abruptly as it had started it was over, and we squelched to the car, clambered in, and battled through frequent squally showers to find Estoi and the hotel where Lynne and I planned on staying for the next three nights.

To our amazement, the hotel was surrounded by pomegranate orchards, which I suppose is a perfectly reasonable thing to find, it’s just that I’d never thought of pomegranates growing on trees before. I guess it was more a case of being surprised to see them than anything else. They seemed somewhat neglected, masses of the fruit lying rotten on the ground, others still on the trees, but beginning to split open and rot where they were. I wonder why they were so neglected… It could be that they were part of the hotel’s gardens, which are in the process of being restored. The hotel itself opened this year in what used to be a private palace, but which is now a pousada. These are historic buildings owned by the Portuguese government, and are run as high class hotels, and the Pousada de Faro, the Palacio de Estoi is a stunning example of the breed. The old house itself provides the public rooms, while the hotel rooms are in a new annexe, very modern and spacious, all with south-facing balconies. Checked in, we changed into dry clothes, ran Glyn and Bogusia to the airport and then went back to the hotel to change for dinner. 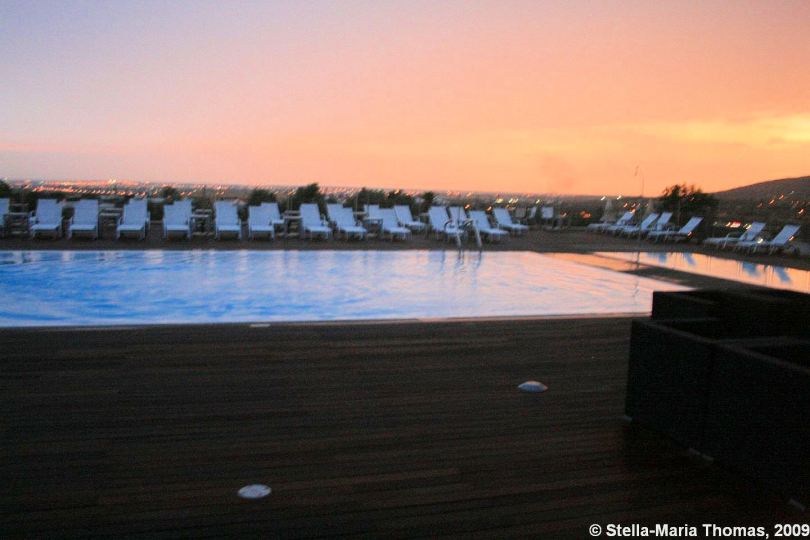 The weather remained vile, so eating indoors seemed like a sensible plan for the night. On the way we took a look at the swimming pool and the bar, both of which looked pretty impressive to us:

The dining room was very pleasant, and the food – while not spectacular – was very good. Lynne started with goats’ cheese and honey, this time wrapped in a pastry case… 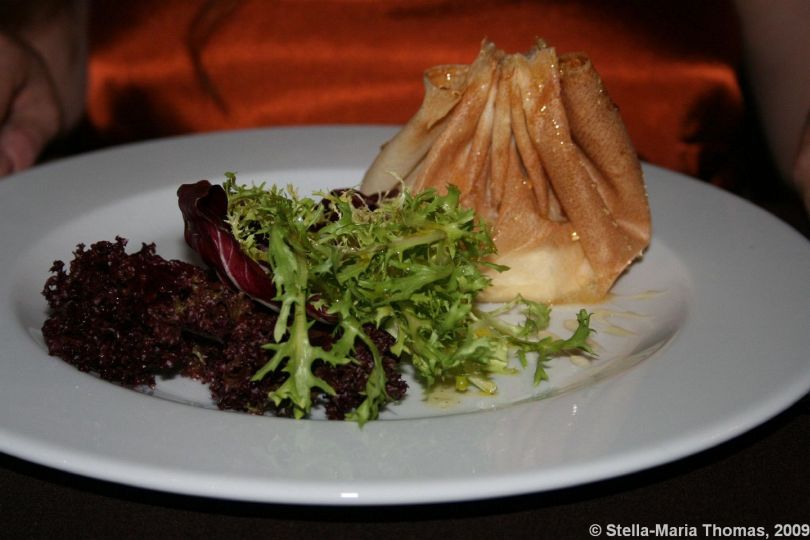 I had the clams with Portuguese black sausage.

We followed that up with a dish of roast kid… 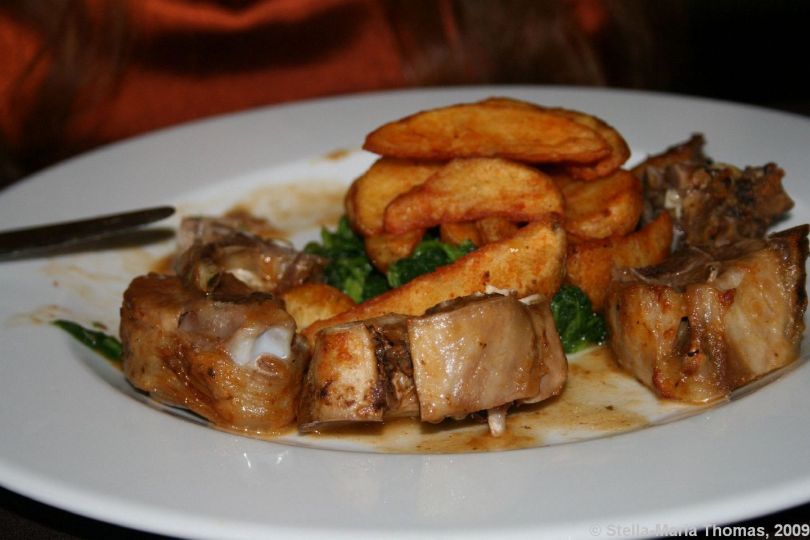 And another of rabbit served with a bread dumpling and spinach. 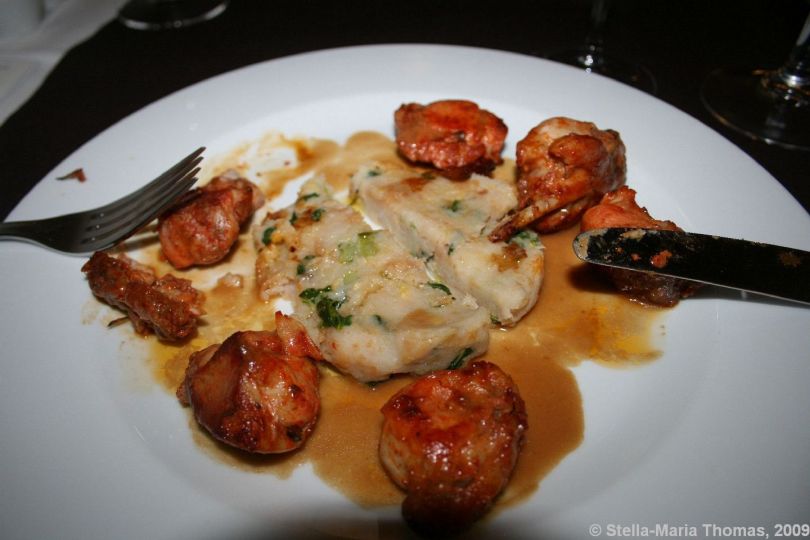 Cabaret was provided by the local cat, which clearly thinks it’s the hotel cat, or at least would like to be… it wandered through the dining room before being shooed out, but as soon as the waiters turned their backs he was back again… Given how vile the weather was – we could hear the thunder crashing outside and the rain lashing down – no one could have blamed him.

On the way back to our room, we looked at the pool again, and yep, it still looked good…