Thursday wasn’t too early a start for anybody – unless theoretically the 45th Macau Motorcycle Grand Prix was any concern of yours. I say theoretically because it was very quickly obvious that whatever practice and qualifying sessions were going to happen, the bikes would not be among them. The sheer amount of rain hurling itself out of the sky made it impossible, even if they had brought wet weather tyres with them. The consequence of this would be repeated reshuffling of the timetable while the weather gods played silly buggers and kept on moving the goalposts. The F3 cars were able to go out, and so Lynne and I made our way to the nearest corner to the hotel, Melco, which just happens to be one of my favourite corners anyway, especially as the Macau police have now decided that Hospital Bend is too dangerous and no one is to be allowed in there. Trussed up in a series of hopefully waterproof layers, Lynne and I took up station at the Hairpin, which was far more relaxed this year with a chef de poste who seemed to think the photographers could look after themselves; he had quite enough on his plate with a bunch of wannabe F1 drivers who couldn’t keep it out of the barriers, thank you very much!

And so it proved, the worst offender being Hironobu Yasuda, who seemed strangely attracted to the Armco on the outside of Melco, bringing everyone to a grinding halt three times over the course of three laps before the marshals had him craned away, presumably on the grounds that if he couldn’t get it right on three attempts, he was probably never going to. 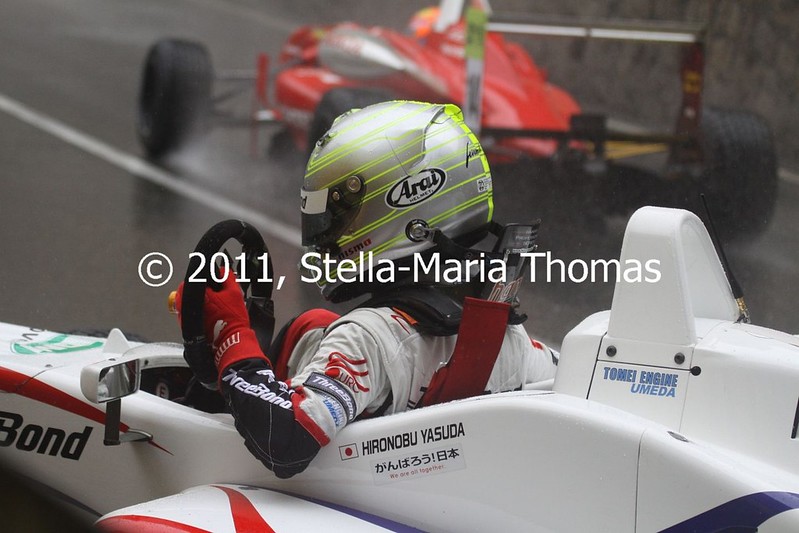 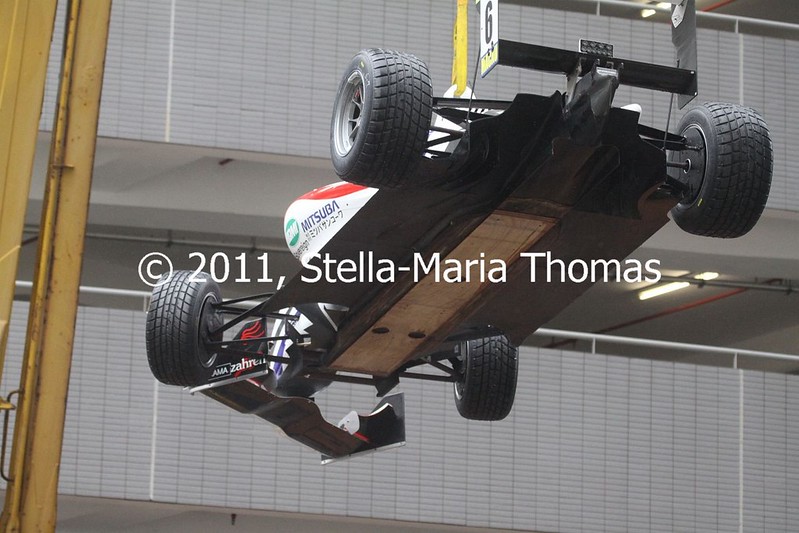 OK so it was wet (oh boy was it wet), but that’s not much of an excuse frankly. There were 28 other guys out there and they were all managing OK. 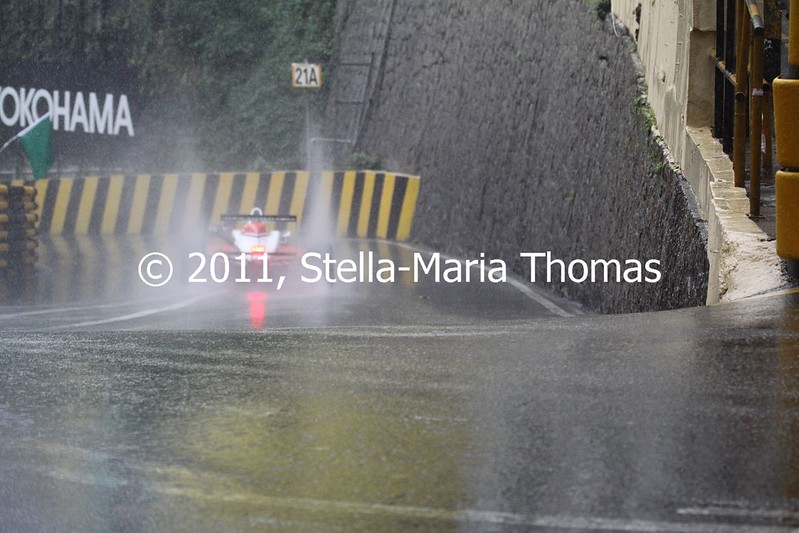 Anyway, the session ended messily with another crash (a much bigger one) involving Kevin Magnussen, Felix Rosenqvist and Marko Asmer.  suggesting it might not be a good weekend to be from Scandinavia or the Baltic. 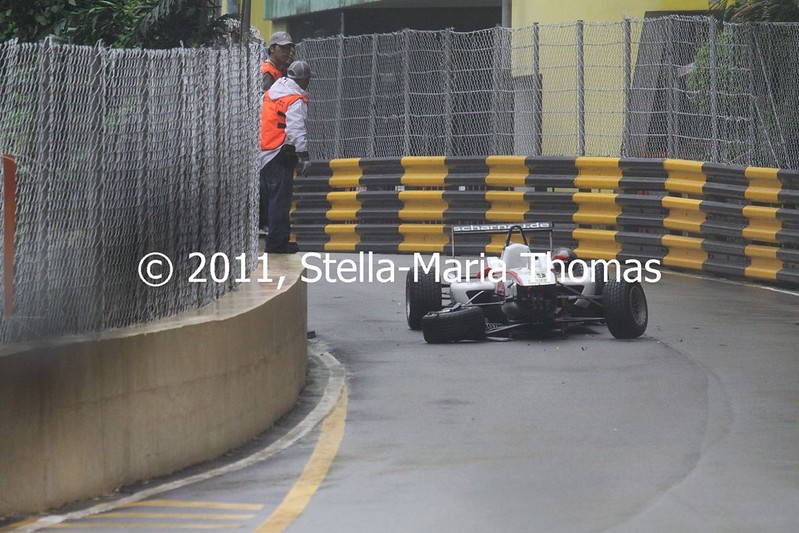 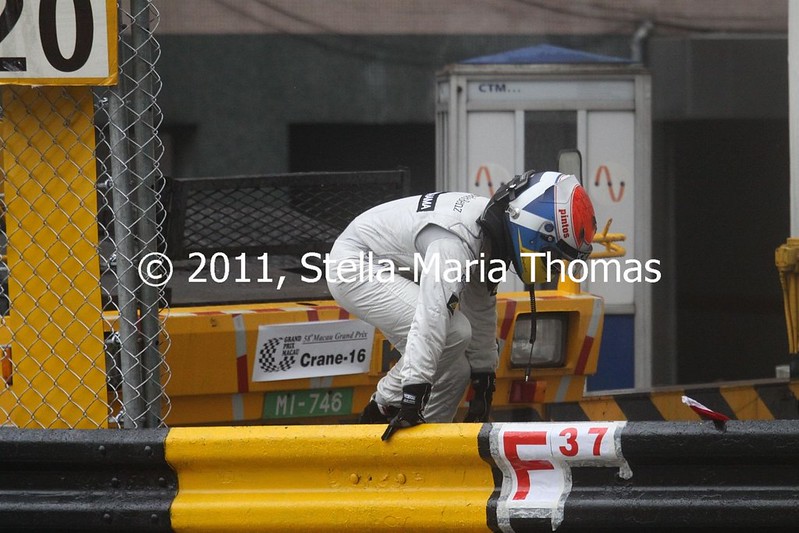 We went back to the hotel afterwards, dried out and then got the shuttle bus to the paddock, snatching a quick weird-arse lunch in the media lounge, before watching first qualifying for the F3 Grand Prix. 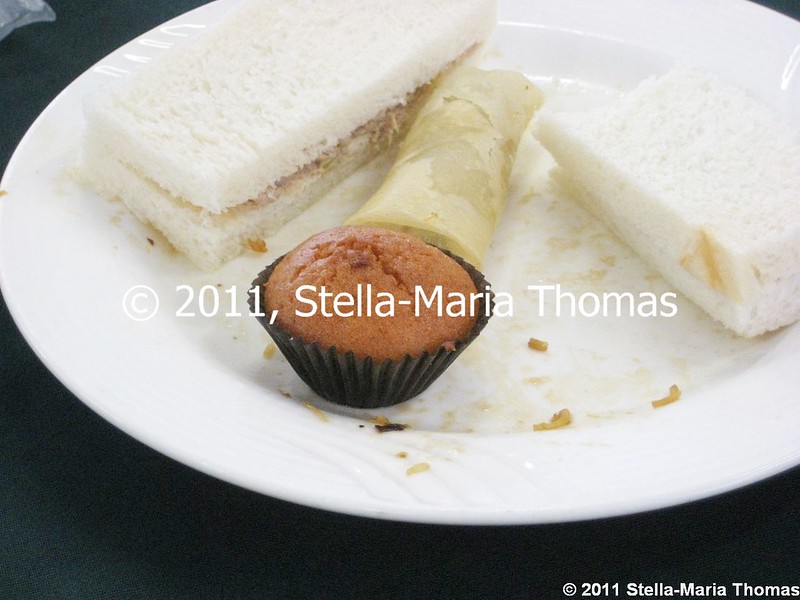 We then got the report and results written up, sent Eric the photo editor a batch of shots from the morning, and before we knew it it was time to go back to the hotel and get cleaned up ready for dinner.

This time la Bonne Heure was actually open, so we booked a table and managed to corrall a cab to get us there – which was just as well given the weather. The rain was still pelting down and we’d had to borrow an umbrella from the hotel, something we were very much in need of! Oh, and it was on our way to the cab from the hotel entrance that we encountered the world’s biggest snail(TM). Inside the restaurant proved to be quite simple, very much a bistro-style establishment, with what seemed to be very French classics, some with more of a twist than others. Over kir royales we studied the choices before making our decisions. 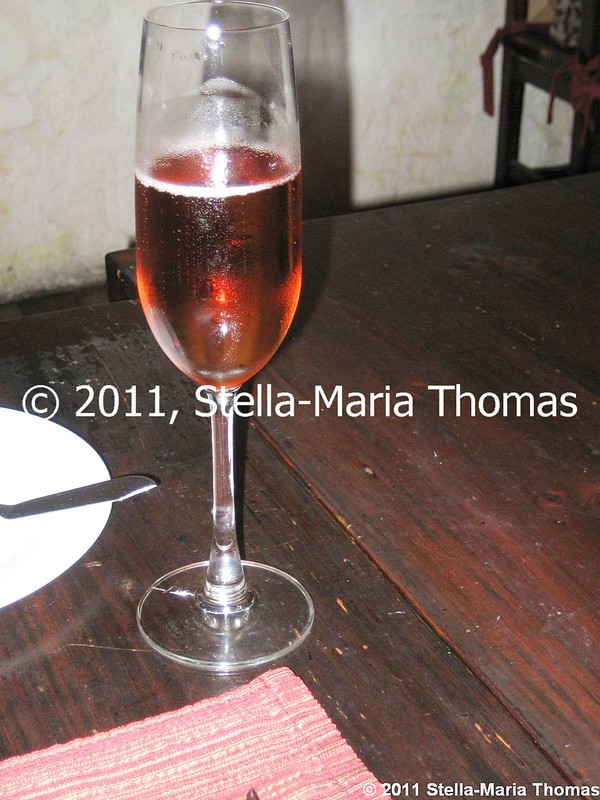 I decided that the pan-fried foie gras with orange jam and balsamic reduction was the only sensible choice, and Lynne went for the same. 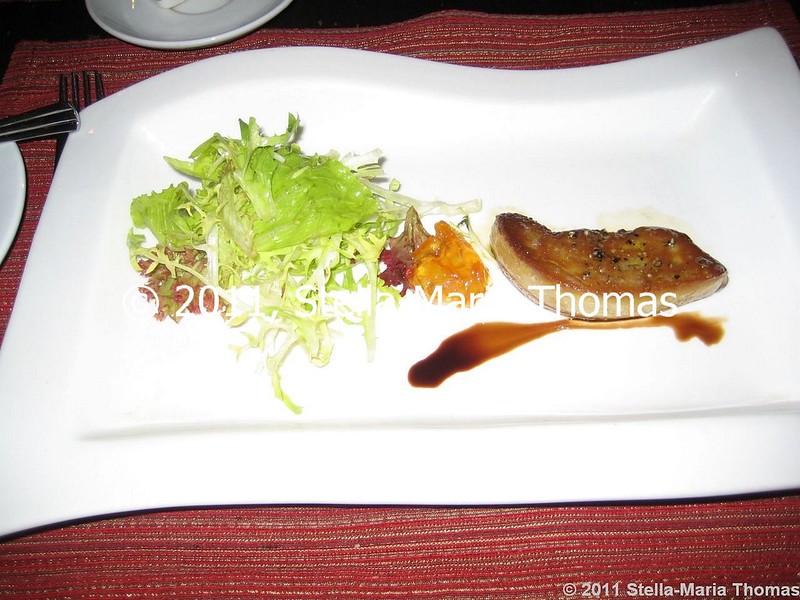 For mains we both opted for the roasted French duck breast with blueberry sauce, which was brilliantly well done – the blueberry sauce just the right mix of sharp and sweet to cut through the fattiness of the duck meat. 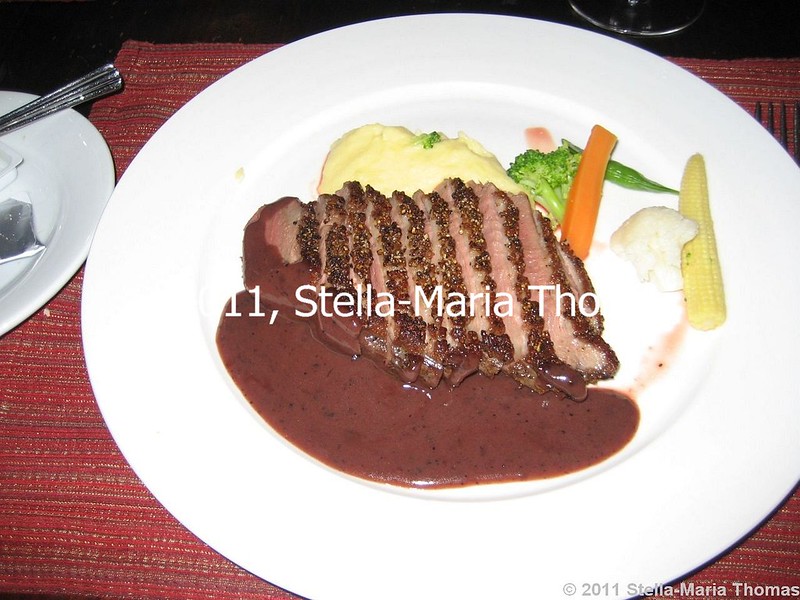 Other members of the party went for that absolute bistro classic, onion soup… 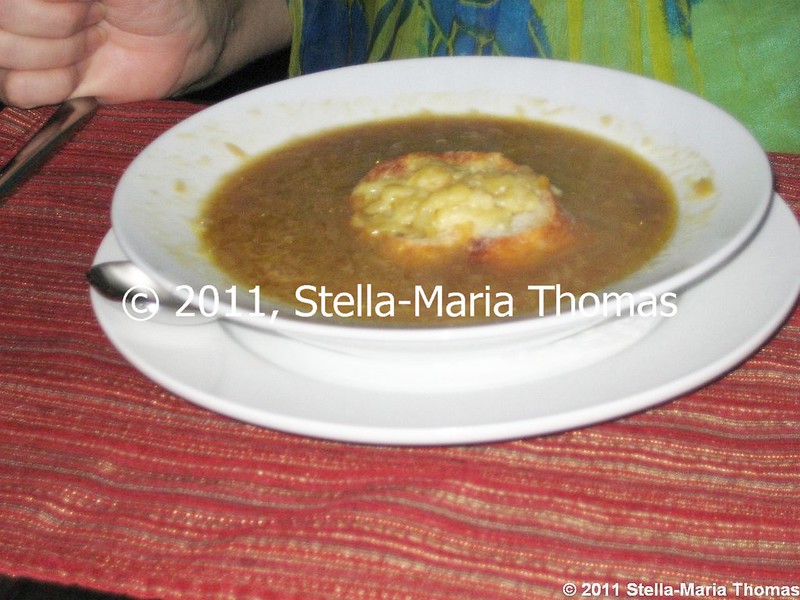 A crispy baked goat cheese salad with bacon and ratatouille was also classically French but with a twist in the shape of the ratatouille. 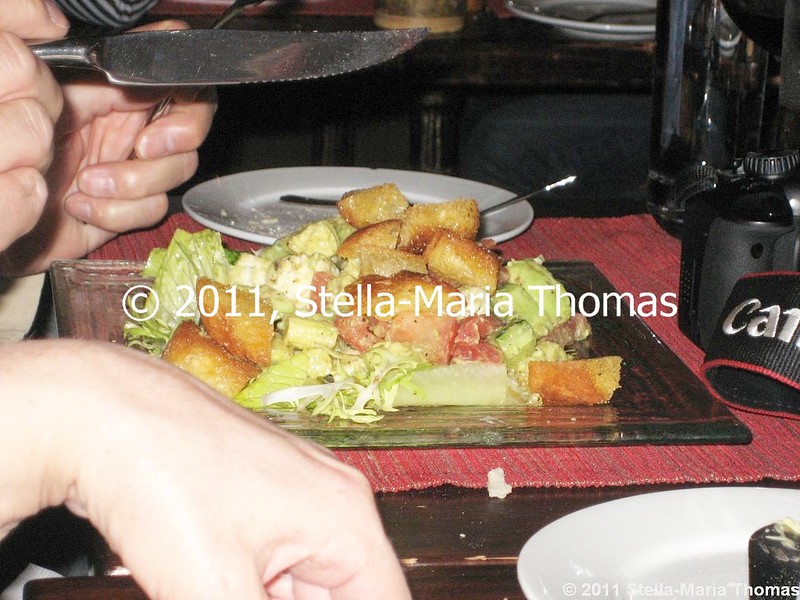 A main of a warm smoked fillet of salmon was perched on a base of watercress purée and the roasted fresh skate wing with almond lemon butter sauce looked wonderful. 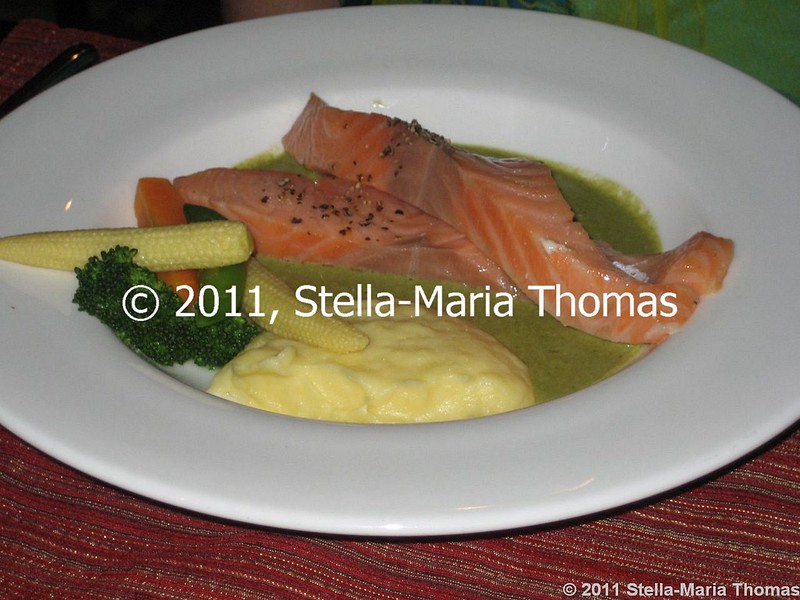 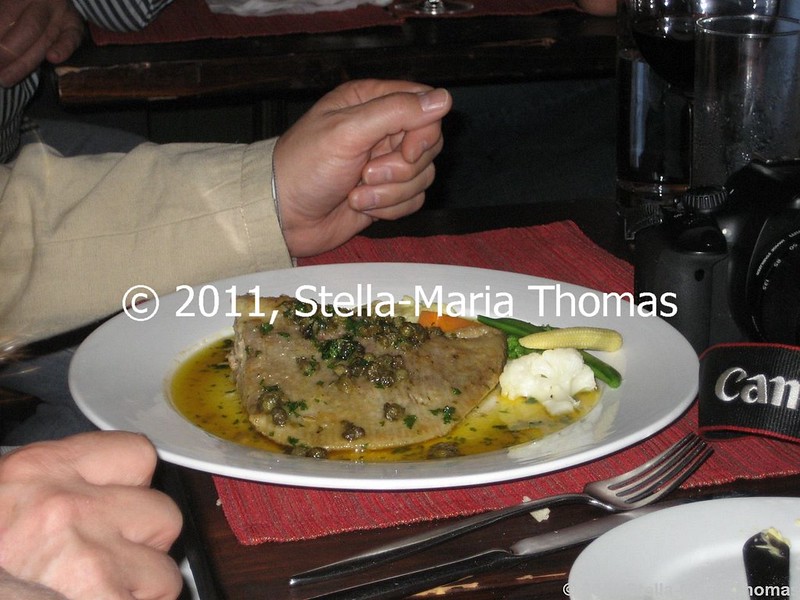 Again desserts proved impossible and, after a chat with the chef, Koji Sonehara, who was friendly and informative. I was happy to tell him we’d had a wonderful meal, and then we simply wandered out to the end of the road to nab a pair of taxis back to the hotel.