Again the day was mostly taken up with the motor racing, which won’t of course come as the slightest surprise to anyone who knows me. This time we were out at Sao Francisco at the”green house”2, a house that was bought by the government to stop development there. In its time it’s been a very beautiful property but it’s slowly falling into disrepair now, which is a shame. The garden may need some work but there are still plants there. 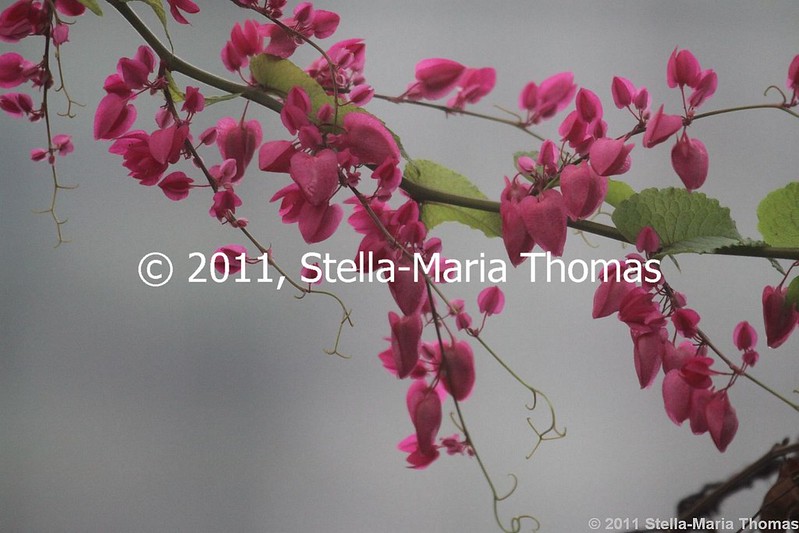 I’d buy it! After all it overlooks the track and it’s a lovely building, right next door to the Clube Militar, which is a brilliant place to go for dinner and is also housed in a gorgeous old colonial building.

The downside is that it’s not the easiest place to take photos from, though it is easy to get to by shuttle bus (and the driver enjoyed demonstrating his excellent command of the English language to us as we waited to set off) and has marshals eating giant sandwiches for lunch and good views when it all goes wrong exiting Lisboa (cf.  Roberto Merhi – mad as a box of frogs, that boy! Quick, pretty, but barking mad once he gets behind the wheel – personally I reckon his helmet may be too tight!). 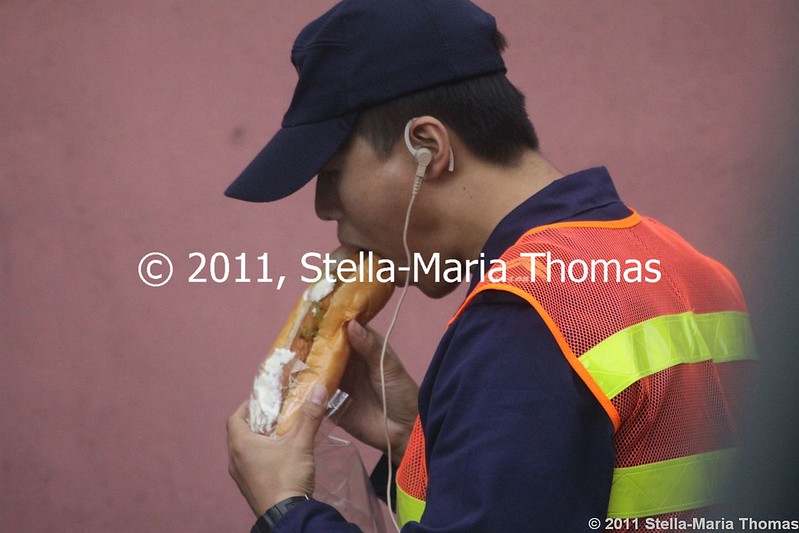 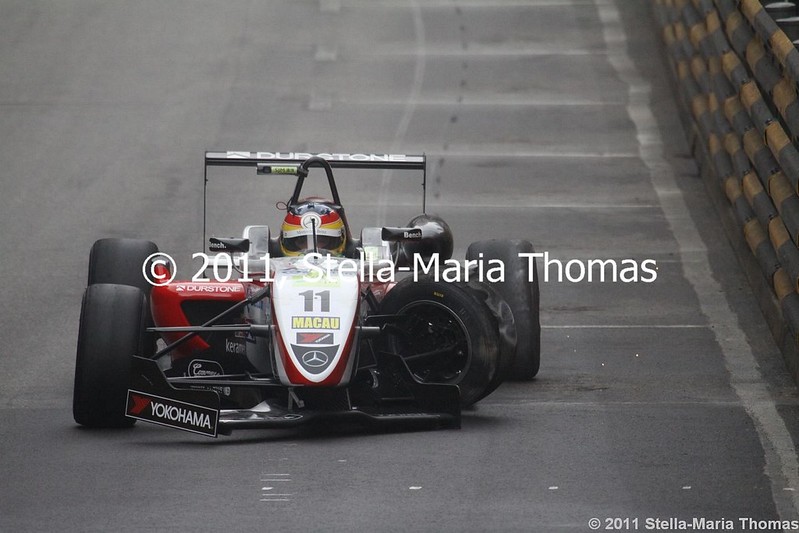 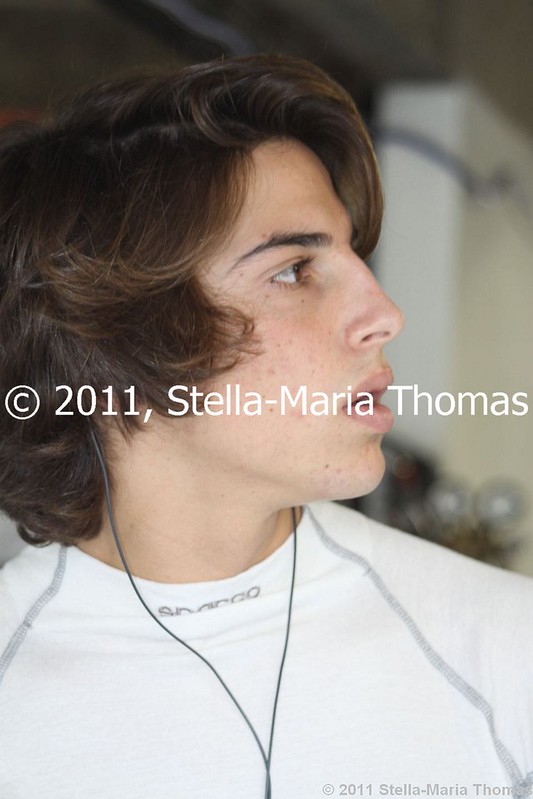 Anyway as can be seen here it was incredibly gloomy so yet again the motorcycles didn’t get out at all and were now scheduled for Saturday (having lost the rescheduled Friday session to fog!) – it was beginning to look as if two dozen nutters with motorbikes had shipped themselves halfway across the world for nothing, as the forecast for Saturday wasn’t what you’d call promising… 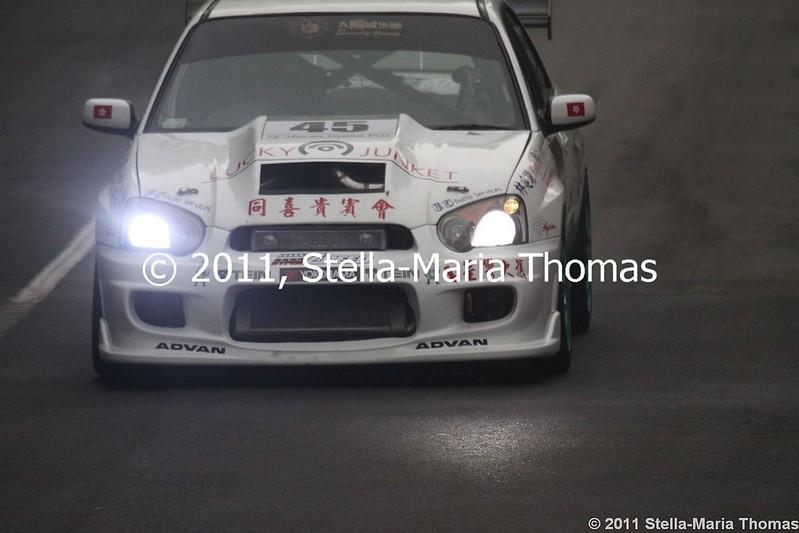 Later in the day – after qualifying ended and Marco Wittmann was on pole which surprised a number of people including Merhi – it proved almost impossible to get a taxi. The queue from the jetfoil was all the way from the rank almost to the doors of the terminal building so we grudgingly shouldered our kit and dragged back to the Pousada where we made a call to see if we could get a table at the Clube Militar – no chance. Booked solid until Monday and only taking bookings from members. Must bear that in mind next year and make sure we go earlier in the week. So we fell back on our old faithful favourite, the Pizzeria Toscana. This is another establishment that’s not as easy to get to as it used to be, given it’s now in the old town on Calçada da Barra, when it used to be in the Grand Prix building (and was a favourite with almost everyone – getting a table at lunchtime could be tricky to say the least – now they deliver instead). One last caipirinha in the Pousada bar while getting the report done – as they don’t open over the weekend – while we stared at what I can only describe as an angry looking sky. 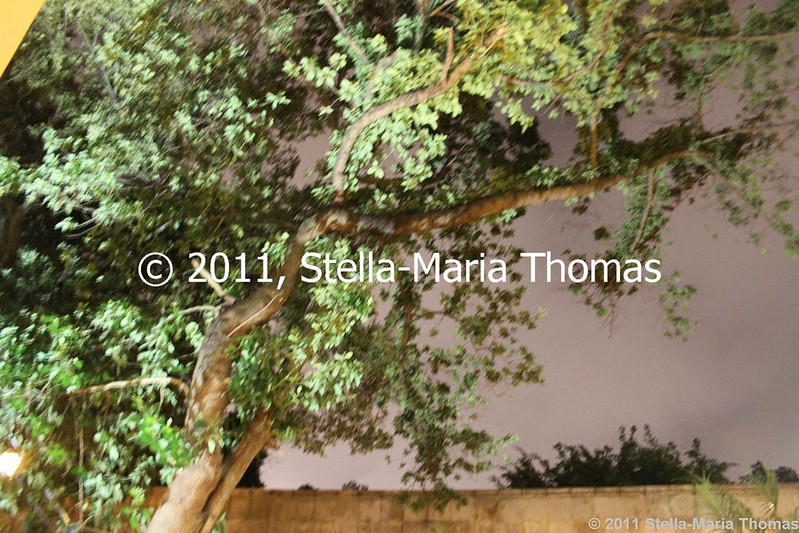 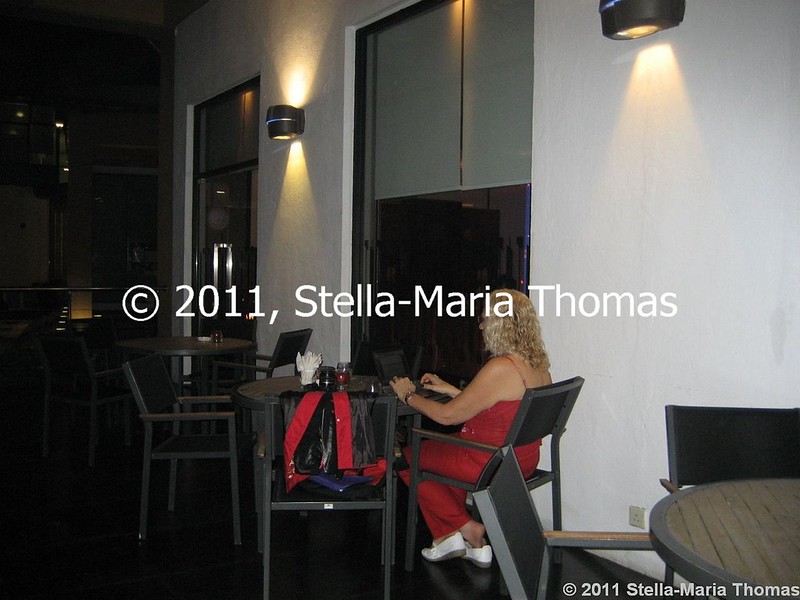 We enjoyed our drinks, settled up at the bar and then managed to nab a taxi that was dropping off a party of diners. We were doing remarkably well on the evening taxis, which was not something that could be said for our companions, who seemed to struggle with the taxi-fu for some reason.

Anyway, at the Pizzeria they remembered us – as well they might as we’ve become regulars since 2001, though obviously only once a year. we settled in to wait for William, Elaine and Lorna… and wait… and wait… They’d struggled to find a cab, a text message informed us, and now they were stuck in a massive traffic jam somewhere near the Nam Van Lakes. They’d be with us as soon as they could. We cracked and ordered a plate of antipasti – mostly Parma ham and various salamis – and munched our way through that to the accompaniment of a Niepoort white port initially, and then the first bottle of Vinho Verde. Eventually the rest of the party turned up and orders were placed. I wasn’t going to have a starter but the mussels and clams in a tomato sauce were too much to resist so I buckled and went for it… and was glad I did. 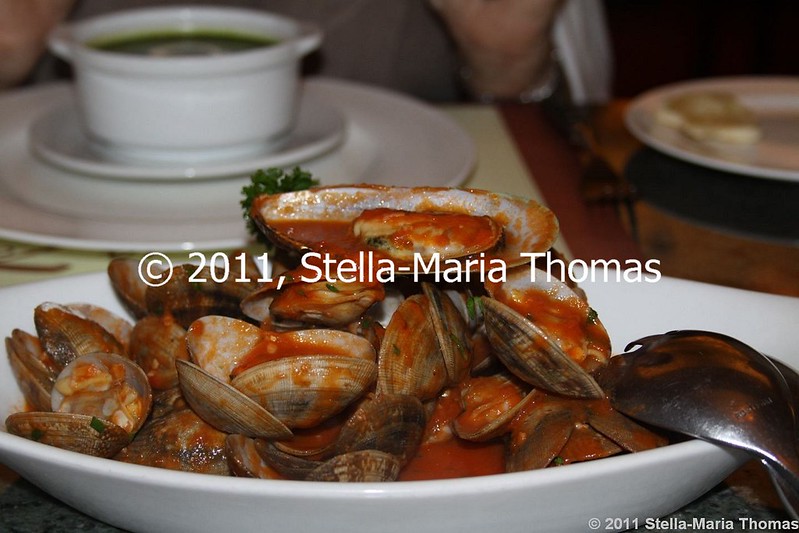 Other starters were a cream of spinach soup or Elaine, and Parma ham and melon for William and Lorna. 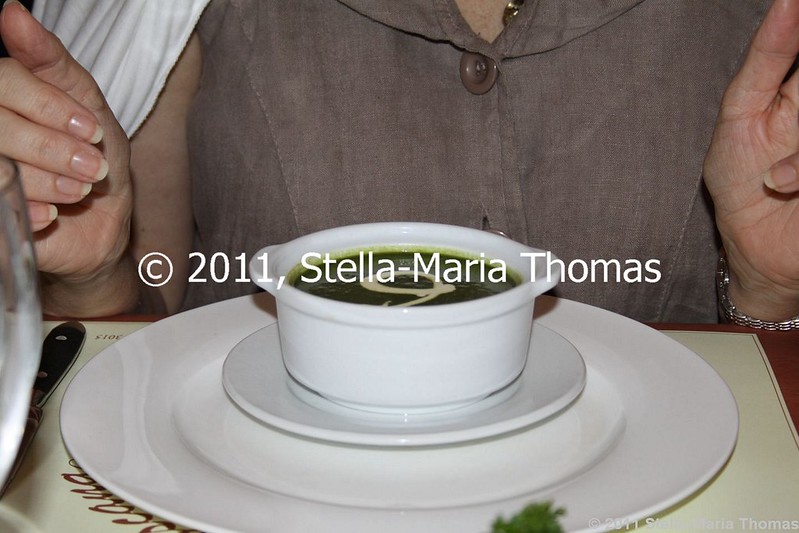 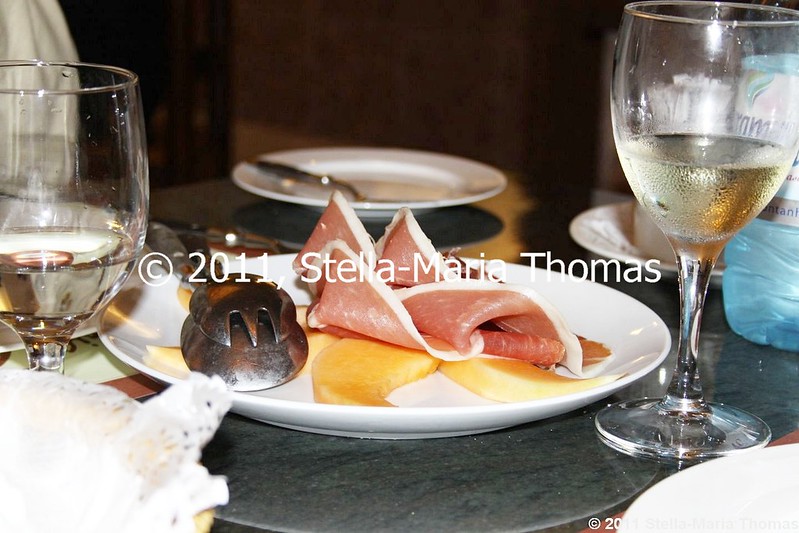 After that there was what looked like a very impressive osso bucco for William. 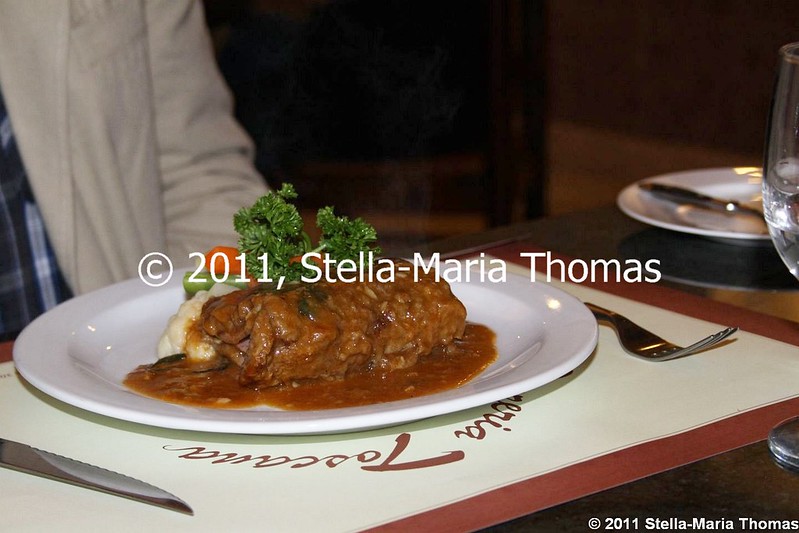 Lorna went for the spaghetti with smoked salmon. 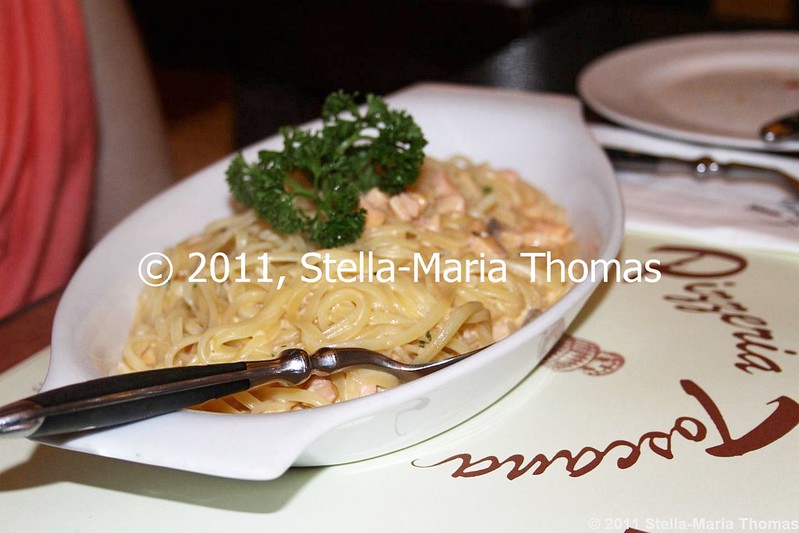 Lynne had a four cheese pizza (a small pizza) and Elaine made the tactictal error of ordering a large pizza, which she had no hope at all of finishing. 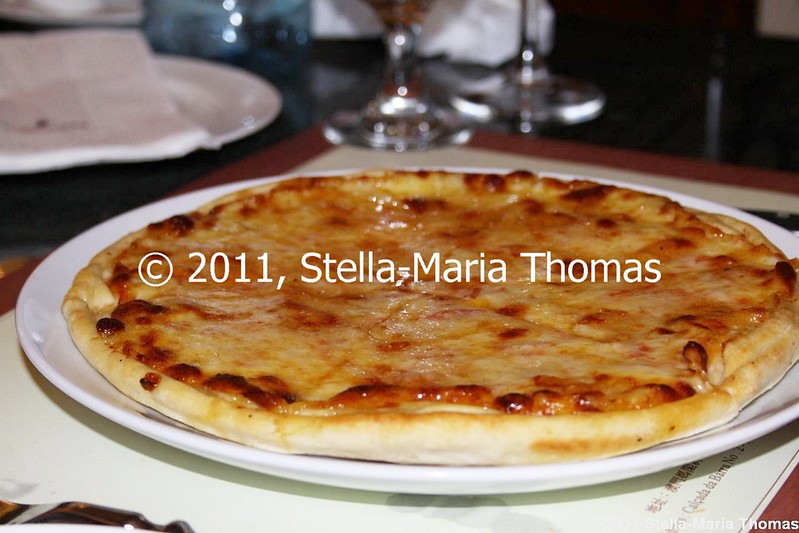 I on the other hand went for something I’ve only ever had there – a seafood spaghetti where the seafood is finished in a lightly curried sauce, thus taking an Italian classic and giving it a distinctly Macanese twist. Brilliant! 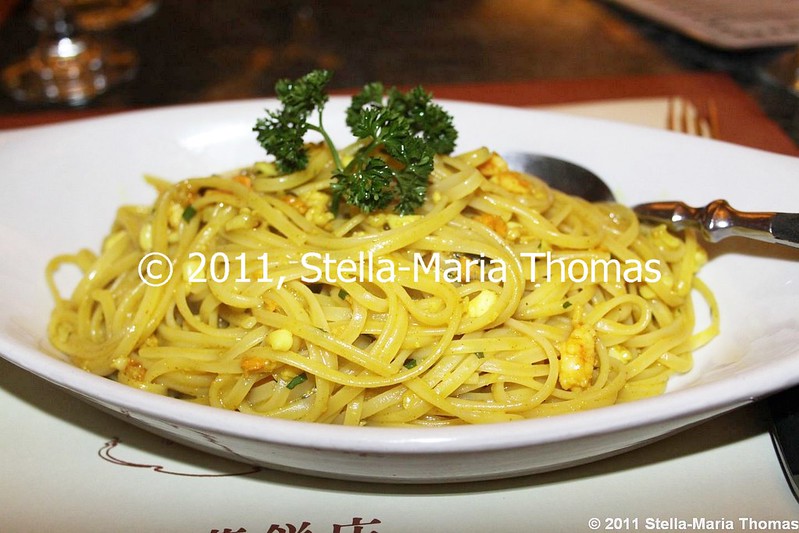 We finished off with capuccinos in odd shaped cups and some delicious little almond flavoured biscuits. Good stuff. 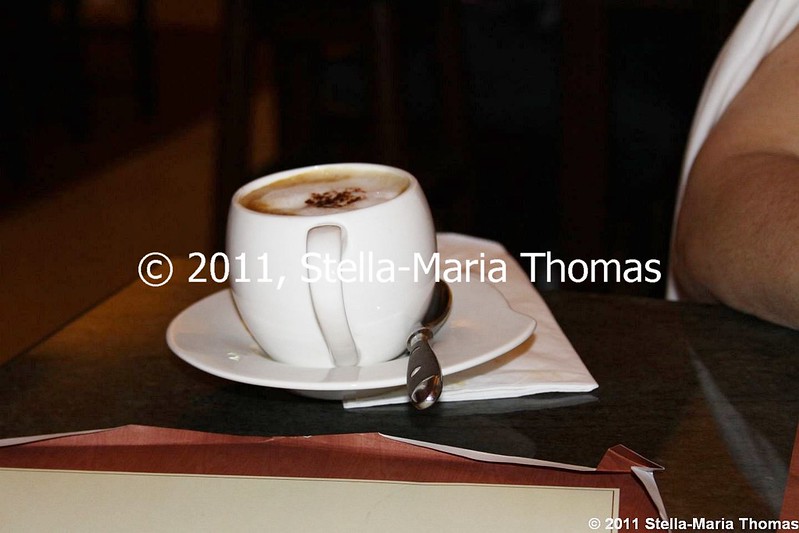 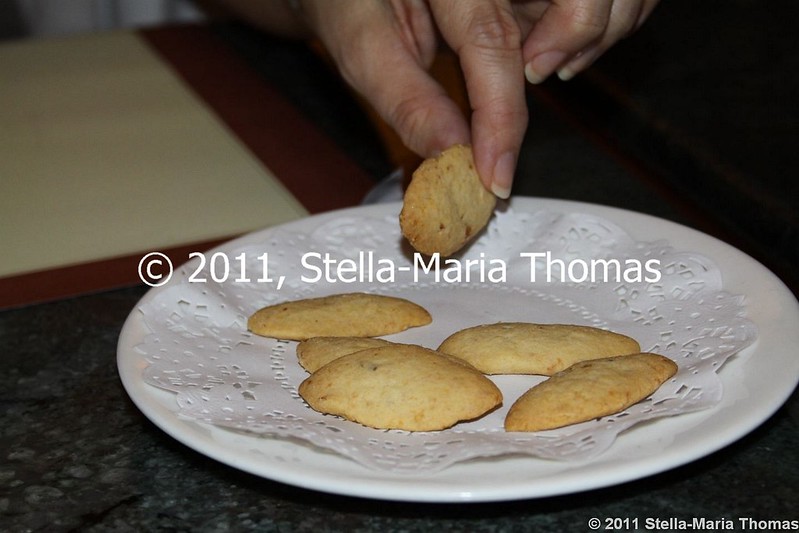 Unfortunately when we got out it was hissing down with rain again and needless to say there wasn’t a cab in sight. Luckily it’s just a short walk to the corner of Calçada da Barra and the Rua do Almirante Sergio, just the right side of A Lorca, and we lurked there to ambush the first “for hire” car to appear. It didn’t take long and we were once again soon tucked up safe and sound back at the hotel.