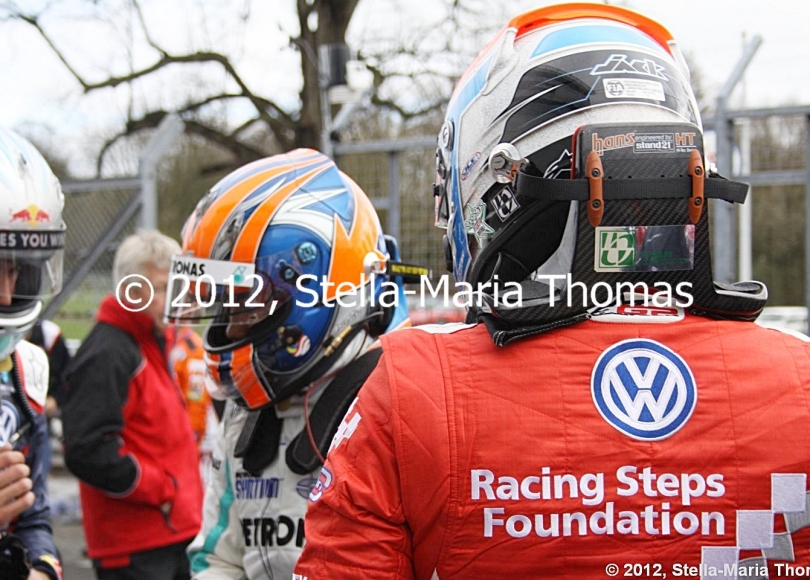 At Oulton Park this Good Friday afternoon Jack Harvey (Carlin) started as he means to go on with a pair of pole positions for Race 1 and Race 3. For Race 3 he was followed home by Felix Serralles (Fortec Motorsport) who might never have raced here before but who wasn’t letting that stop him. Behind the Puerto Rican rookie in 3rd was Harry Tincknell (Carlin), like Harvey, back for a second season in the category. Tincknell nabbed 2nd for Race 1, just ahead of Jazeman Jaafar (Carlin).

The session started in freezing cold conditions, with a brief shower as they lined up in the pit lane ready to go out. It has been very warm in the UK recently but clearly as it’s Oulton Park at Easter Arctic conditions must be the order of the day. With the recession biting hard the series is proving relatively bullet proof though inevitably numbers are slightly down. However, 14 cars lined up to start the 2012 series at 14:15 this afternoon.

With the weather looking questionable everyone was pretty keen to get out and set a banker lap or two. This had the potential to be interesting, more so for the likes of Geoff Uhrhane (Double R Racing), the Australian’s deal only coming together earlier this week, leaving him short on testing and actually driving an F3 car for the first time ever in the morning’s free practice session. The fact that he binned it probably wasn’t that big a surprise as he tried to come to terms with the sheer speed of the thing, especially in the corners. Another one on a steep learning curve this year is going to be Duvasheen Padayachee (Double Racing), another of four Australians, who has never seen any of the circuits he will be racing on this season.

Someone who now has experience is Harvey and it showed. The man from Lincoln went for it immediately and was soon at the top of the times, ahead of Pipo Derani (Fortec Motorsport), Jaafar and Carlos Sainz Jr (Carlin), the Spaniard in the latest of the RedBull backed cars. A quick reshuffle saw Uhrhane going fastest temporarily from Serralles who was proving usefully fast after a season of Formula Renault. Meanwhile Richard “Spike” Goddard (T-Sport) was leading the National Class from Padayachee, and would do so for most of the session, having the advantage of actually having seen Oulton Park before. At one point he was as high up the overall order as 3rd but that was in the early stages and he soon settled down to a more normal position. Meanwhile Harvey claimed pole back, but Jaafar and Tincknell both went faster but not as fast as Sainz Jr. He was soon joined on the front row by Jaafar, while Derani briefly occupied pole. Harvey wasn’t about to put up with that though and was soon back at the top, which spurred Sainz on to an even faster time.

It was all change though, with Alex Lynn (Fortec Motorsport) the next to show his hand, going fastest overall, just ahead of team mate Hannes van Asseldonk. A brief shower now played its part with Sainz again going ahead from Serralles, Lynn, van Asseldonk, Derani, Harvey, Jaafar, Fantin, Fahmi Ilyas (Double R Racing), Tincknell, Nick McBride (ThreeBond with T-Sport) and Uhrhane. The Carlin boys were still speeding up though, with Harvey back to 2nd, and Jaafar in 3rd from Lynn. Harvey kept pushing on, going quicker yet though he stayed 2nd. An improvement from Tincknell saw him in 8th, but just as McBride had his knuckles rapped for not respecting track limits, there was a flurry of yellows at Old Hall where Ilyas had stuffed in into the barriers. Shortly after that the red flags where hauled out and the rescue crew were dispatched to rescue the Malaysian and rebuild the tyre wall. The remaining 13 cars filed back into the pits. The order at this point was Sainz Jr, from Harvey, Jaafar, Lynn, Derani, Serralles, van Asseldonk, Tincknell, Fantin and Ilyas. McBride was 11th ahead of Uhrhane, Goddard and Padayachee, the Australians all clustering together.

When they did finally get back out it was quite some time before they got back up to speed, which wasn’t that surprising given how cold the tyres would have got as they loitered in the pits. Again it was Harvey who proved to be the main pace setter, getting the power down very effectively, as were Fantin and Jaafar. Jaafar moved to 3rd while Lynn improved to 4th from Derani. It wasn’t over yet though and another lap was all it took for Harvey to snatch his first pole position of the meeting. Tincknell was the next improver going 3rd, with Jaafar pushing him down a place when he grabbed 2nd. Sainz Jr was the loser in all of this, starting a slide down the order and then being reported for not respecting track limits. He would slip even further before he was done though would manage to salvage something in the closing stages of the session.

However, elsewhere there was activity as Fantin slotted in to 4th but Tincknell then shuffled things further with a time that was enough for 2nd, at least until Jaafar came round again. Through it all Harvey stayed solidly on pole, the Englishman not to be moved. In fact he was still looking for that second pole, while Lynn had done enough for 4th now. The order with 10 minutes left was Harvey, from Tincknell, Jaafar, Lynn, Sainz Jr, Fantin, Serralles, van Asseldonk, Derani and Ilyas (who would not get out again). McBride was still 11th from Uhrhane, Goddard and Padayachee.

Harvey finally got his second pole, while van Asseldonk improved for 5th and – to the surprise of some – Serralles went 2nd with Tincknell 0.001 seconds behind in 3rd overall. With very little time left on the clock most of the drivers, including Harvey, seemed to think there was nothing to be gained from staying out any longer and they began to trickle back into the pits. The only two who were still trying were Sainz Jr and Lynn. They both set their fastest first sectors of the session, but then Lynn got caught up behind slow traffic, which scuppered his chances of an improvement. Sainz Jr was luckier and crossed the line to go 4th. And that was pretty much it for the session.

For Round 1 the grid order will be Harvey, from Tincknell, Jaafar, Sainz Jr, Lynn, Fantin, van Asseldonk, Serralles, Derani and Ilyas. 11th will be McBride, from Goddard, Uhrhane and Padayachee.

For Round 3 the order will be Harvey from Serralles, then Tincknell, Sainz Jr, Jaafar, van Asseldonk, Lynn, Fantin, Derani and Ilyas. 11th is again McBride, Uhrhane, Goddard and Padayachee.