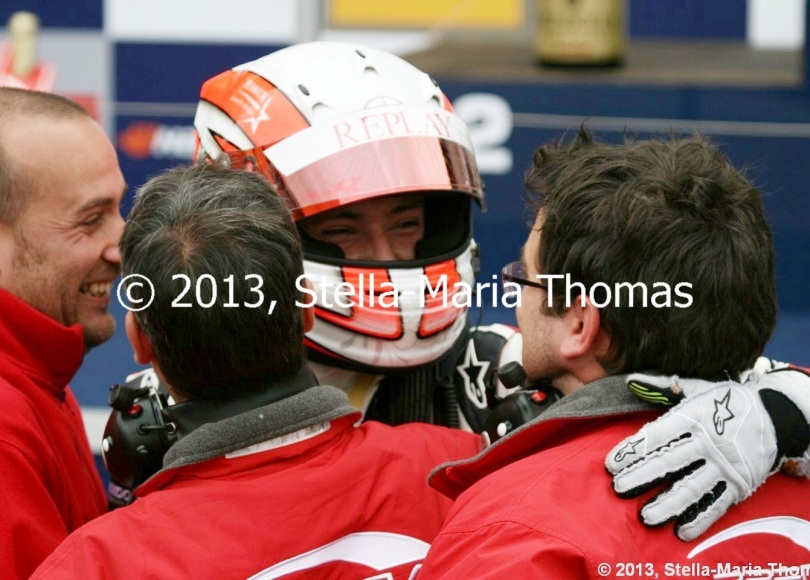 At Brands Hatch this morning Alex Lynn (Prema Powerteam) took his first win of the FIA European F3 Championship with a lights-to-flag run ahead of team-mates Raffaele Marciello and Lucas Auer. In the way of things at Brands Hatch it was pretty processional, with the Indy circuit proving as resistant to overtaking moves as ever. There was the odd flash of interest if you knew where to look, but otherwise it was pretty pedestrian.

Before the start the field had already been reduced from 29 to 28 with Michael Lewis (kfzteile24 Mücke Motorsport) effectively ruled out of any further participation in the meeting, He had a massive off in second qualifying, spearing into the gravel at Paddock Hill Bend and bringing out the red flags. He was extracted and taken to hospital for a check-up, where the medics decided that he would be OK, but would not be fit to race this weekend. It was pretty academic really, as the impact reduced the car to component parts anyway.

At the start Lynn made a smooth getaway and held Marciello off as they tore into Paddock Hill Bend, forcing the Italian to stay on the outside, even though he was theoretically better placed starting from second on the grid. Behind them, Auer dropped back slightly having failed to match the others for start pace. As a result he ended up clashing wheels with Sven Müller (kfzteile24 Mücke Motorsport) and losing ground to a fast starting Felix Rosenqvist (kfzteile24 Mücke Motorsport).

Given there were 28 starters it was something of a miracle that they all made it through Paddock and then Druids without anyone taking to the gravel or grass, but make it they did. Shortly afterwards though Eddie Cheever (Prema Powerteam) took to the Paddock Bend gravel and dropped himself all the way down the order to dead last. He would spend the rest of the race trying to recover, along with Andre Rudersdorf (ma-con) who was given a 10 grid slot penalty and thus started from the back.

In the middle of the pack there was some jostling for position going on involving Felix Serralles (Fortec Motorsport), William Buller (ThreeBond with T-Sport) and Dennis van der Laar (Van Amersfoort Racing). Serralles and Buller should both have been much higher up the grid really, so it was no surprise that they were both pushing very hard.

For the next 50 laps the race remained pretty static, with Lynn pulling out a gap only for Marciello to close up again, but rarely managing to get close enough to consider overtaking. Cheever, meanwhile, had moved from last by passing Michela Cerruti (Romeo Ferraris), and was now on the tail of Tatiana Calderon (Double R Racing). It wasn’t exactly thrilling, but it was at least overtaking.

The other area of interest was Serralles, who had managed to lose ground in the pack and was now locked in battle with Mans Grenhagen (van Amersfoort Racing) – at least until the Puerto Rican ran so wide at Paddock Hill Bend that it seemed unlikely he would ever find a way back. He’d dropped from 12th originally to 19th and was not looking at all happy.

The inexorable progress of the Prema pair, meanwhile, continued unhampered by anything much, as they steadily closed on the back of the pack. At that end Cheever was now in pursuit of Sean Gelael (Double R Racing) which at least gave some prospect of change.

Elsewhere Jordan King (Carlin) and Josh Hill (Carlin) were locked into a bit of an internecine tussle for 9th but thankfully seemed to have taken the advice about not hitting your team-mate to heart, a restriction that also applied to Lynn and Marciello. An offline moment from Jann Mardenborough (Carlin) saw him lose ground, but otherwise things remained calm and, from a spectator’s point of view, about as exciting as watching paint dry.

By the mid-point things started to get a little more interesting at the front, but this was because the leaders were now with the squabbling mob at the back and hoping against hope that the blue “there’s a faster car behind you and it needs to come past” flags would have the desired effect. It worked reasonably well for most people, though Marciello closed alarmingly on Lynn and made a move as they headed into Paddock. Lynn was having none of it and forced his team-mate to go to the outside once again, thus retaining his lead. He could probably have done without that.

In the pack, Daniil Kvyat (Carlin) was having problems getting to grips with Brands and with team-mate Mardenborough and was trying all sorts of interesting lines to get past. None of his attempts worked, but they did provide some much needed entertainment. Meanwhile, Sandro Zeller (Jo Zeller Racing) was proving to be something of a roadblock for the leaders, and Rosenqvist was up to 3rd after Muller exited the race, slowing dramatically and eventually parking up on the exit from Druids. Van der Laar also dropped out on lap 35, but his absence was not that noticeable.

And if you were looking for action, that was pretty much it. Rosenqvist made a mistake that let Auer up into 3rd, while Lynn and Marciello continued on to the flag. Afterwards, Lynn explained that things had perhaps been somewhat more exciting that he had hoped for. “It was fairly eventful – too eventful for my liking really. At the start I tried to get a gap from Lello but when we caught up with some cars he caught up again. Then he got too close for my liking but it’s difficult to overtake on the outside of Turn 1 so I just stayed calm and defended when I needed to.”

Marciello took a very different view. “It was boring. I was close to Alex every lap and I stayed close to him and waited for a mistake but he did a very good job and the car was good… It is not very good to overtake here, so you have to win the race on the first corner. Our only team orders were not to crash.”

Auer admitted that he had made “not the best start. I touched with Sven Muller then I overtook him, then I was close to Felix and when he slowed I overtook him.”

Fastest lap of the race was set by Lynn.