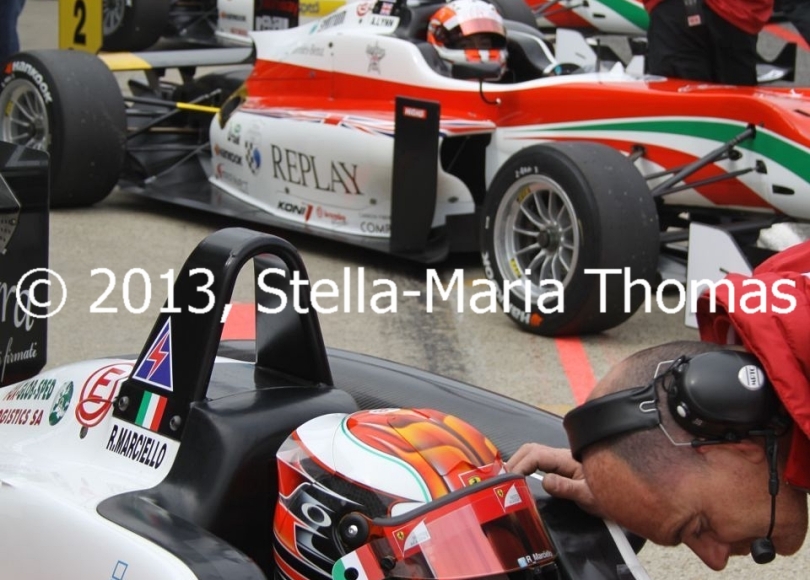 At Brands Hatch this morning Raffaele Marciello (Prema Powerteam) once again made it perfectly clear that as far as he is concerned, the 2013 FIA European F3 Championship belongs to him and no one else. Once again starting from second, he made the most of the advantageous starting position to come home well ahead of team-mate Lucas Auer, and Carlin’s Harry Tincknell in 3rd. However, the scrutineers thought otherwise, and some time later announced that Marciello had been disqualified for “a technical irregularity”. That promoted Auer to victory and meant that Felix Rosenqvist (kfzteile24 Mücke Motorsport) inherited 3rd.

After two very tame races, the boredom seemed to provoke all and sundry into some very silly behavior which at least made this 35 minute run more interesting. There were also some unfortunate accidents, which ultimately meant that at least Prema didn’t snatch all of the podium places this time. At the start Alex Lynn (Prema Powerteam), starting from pole, got away much better than on Saturday afternoon, and for a while it looked as if he might be able to resist Marciello’s attack. It was not to be, however, the Italian claiming the lead on lap one and keeping it for the rest of the race.

At the start, Antonio Giovinazzi (Double R Racing) failed to get off the line on time and was very lucky to escape being clobbered by anyone behind him. Meanwhile, everyone else got away well but then there was a bit of a kerfuffle in the pack that saw Jann Mardenborough (Carlin) get tagged by someone else. He had a wild moment or two sorting it out, and then retired to the pits with suspension damage. A massive move by Hill for positions looked as if the youngster might gain place, but despite a committed dive, it did him no good and he stayed 9th.

At the front Marciello quickly began to open up a gap, and there was some speculation that perhaps fitting some sprinklers at Druids might liven things up a bit, but otherwise it seemed we were now done and faced a dull procession to the flag. The lads out there thought differently though.

Mitchell Gilbert (kfzteile24 Mücke Motorsport) made a lunge at Nicholas Latifi (Carlin), Latifi defended himself and Gilbert whacked the back end of the Canadian’s car, destroying his own nose in the process. A piece of bodywork went flying through the air, only to be reduced to pieces by the following pack. Elsewhere Måns Grenhagen (van Amersfoort Racing) promptly offed it big time at Druids, removing himself from the equation.

And then it got really dramatic. Felix Serralles (Fortec Motorsport) and Michela Cerutti (Romeo Ferraris) both came in to serve drive through penalties (of which there were many this morning), but that wasn’t the real shock. That came when Lynn, running in second, spun all on his own and ended up stuck in the middle of the track. There wasn’t much room to get by, but most of the following cars avoided him until we got to Eddie Cheever (Prema Powerteam). The Italian clipped his team-mate, ripped a wheel off, and powered straight on into the barriers.

At the restart all seemed well, especially at the front, but then the officials looked at the timing screens and realized that a whole raft of times were faster than they should have been with full course yellows and a Safety Car in operation. Suddenly the penalty notifications started to chase across the screens, and the pit lane got very busy indeed with drive through penalties “improving sector times under yellow flags” for Kvyat, Goddard, Hill, Serralles (again), Buller, Derani, King and Gelael. That scrambled the order no end and put a whole bunch of faster drivers at the back with a point to prove.

Marciello continued to lead, from Auer, while Tincknell survived an attack from Rosenqvist at the restart and was settled in 3rd when the dust finally settled. Behind Rosenqvist was Müller, from Blomqvist, Wolf, Latifi, Nissany and Rudersdorf.  Giovinazzi was now 11th from Zeller, King, Buller, Hill, Kvyat, Derani, Gelael, Serralles and Goddard. Cerutti was 21st with Calderon and Gilbert bringing up the rear.

With Nissany and Rudersdorf both in the top ten this was looking more than a bit unlikely now. It has the potential to get messy, as did a cluster further back where Derani had passed Gelael for 17th but Serralles was stuck in a sandwich behind the Israeli and ahead of Goddard. Just ahead of them, Zeller was blocking Buller, Hill and Kvyat for 13th.

As Serralles gained a place back by getting the drop on Gelael, Giovinazzi moved into 10th, passing Rudersdorf, while Zeller finally found he could no longer hold off King, Buller or Hill. They were all through now, and Kvyat was next to come up, demoting Zeller further to claim 15th. Meanwhile, Gilbert was finally out of the race, having been black-flagged, the perfect end to a decidedly less than perfect weekend for the Australian.

And thus the race wound to its conclusion, with Marciello the winner. As he said, “Just like yesterday it’s important at the start to stick to your trajectory. Alex was next to me at the first corner but I was a bit in front… Now I have a big gap in the championship points but it’s a long season and I must aim to take as many points as possible.”

Auer was pleased to have avoided Lynn and inherited 2nd, saying “It was quite easy to overtake (Lynn) when he spun. I had enough space. At the restart I was quite close to Marciello but I was pushing to catch him, and it was a great job from Prema.” He was also looking forward to the next meeting at the RedBull Ring in Austria. “In the points Marciello is quite far away but the rest of us are quite tight so I’ll try to get a podium at home of course. It’ll be great to race at home and I’ll try to get as many points as possible.”

In 3rd Tincknell was pleased that the car was improved from Saturday.  “I made a good start in the opening laps catching Alex, then the safety car restart was good but I didn’t have enough space to spoil the Prema party. After the suspension problem yesterday the car was much stronger on the corners with team working well and so we should be on the podium in Austria.”

4th was Rosenqvist, from Müller, Blomqvist, Wolf, Latifi, Nissany, Giovinazzi and Rudersdorf. 11th went to King, leading home Buller, Hill, Kvyat, Zeller, Serralles, Derani, Goddard, Cerruti and Calderon. There were no other finishers, and of course once Marciello was disqualified, everyone moved up one place in the order, making the top ten Auer, Tincknell, Rosenqvist, Müller, Blomqvist, Wolf, Latifi, Nissany, Giovinazzi, Rudersdorf and King.

The fastest lap of the race was set by Auer.