Race Report – Round 27 (Race 3):
At Vallelunga this afternoon Raffaele Marciello’s luck stayed with him despite Safety Car’s and other incidents, as he came home to victory in front of Luis Felipe “Pipo” Derani (Fortec Motorsport) and Alexander Sims (ThreeBond with T-Sport). Felix Rosenqvist (kfz-teile24 Mücke Motorsport) kept his championship hopes alive with another fighting drive from 13th to 6th despite being hampered by other cars that should not have been there, the Swede in no way ready to concede defeat to his Italian rival any time soon.

There was drama even before the start, when Lucas Auer (Prema Powerteam) stalled at the start, eventually getting going after the pack had left the grid. In practice, he should not then have reclaimed his grid slot, but should have started last. As it was he slotted in ahead of Rosenqvist, thus hampering the Swede’s efforts to catch Marciello in the points chase.

Off the grid, Derani stormed away to claim the lead from Marciello. Also at the start, Eddie Cheever (Prema Powerteam) stalled on the grid, and was then collected by Nicholas Latifi (Carlin), putting both of them out of the race there and then. Just for good measure, a corner later Sean Gelael (Double R Racing) and Lucas Wolf (URD Rennsport) clashed, the Indonesian in particular getting a mighty long way off piste before coming to rest. And that was the Safety Car out again… which seems to have been when Marciello passed Derain, a point that would lead to much discussion later.

On Lap 3 the Safety Car finally left them all to get on in with it. Marciello controlled the restart, but in the pack behind him all sorts of mayhem was kicking off.

Tincknell and Jordan were fighting an inter-team battle for 9th, which was joined shortly afterwards by Kvyat, while Lynn had nicked 4th place from Sims. Sims came back at Lynn but got on the kerbs and had a bit of a moment that cost him all the ground he’d just made up. None of this was helped by the fact that the whole gaggle of them were all bottled up behind Serralles, who was hanging on to 3rd for dear life.

And then it got messy. Lynn forced his way past Serralles for 3rd, but Serralles fought back and regained the place. Lynn was in trouble with Sims looking for a way past as well, and needed to pass the Puerto Rican, who was basically preventing anyone getting on terms with Derani in 2nd, especially as Marciello was pulling away but Derani was giving enthusiastic chase, setting a new fastest lap as he did so.

That seemed to spur Lynn on, and the next thing was that they made contact, locking wheels into the corner. Serralles’ car took off, and landed on its wheels on the grass, letting Lynn though. While the Prema and Fortec cars tangled, Sims saw his opportunity and was through for 3rd before Lynn could recover his equilibrium.

In the mayhem behind them, King was able to charge through on Tincknell and was 6th, towing Kvyat with him, Tincknell ending up the loser in that battle as he couldn’t manage to hold them off and he ended up 8th. Rosenqvist, meanwhile, took advantage of Auer running into trouble and nipped through to claim 7th just behind King. With the race around halfway done Marciello continued to lead Derani and Sims, while Müller got the drop on Lynn for 4th, King holding off Rosenqvist for 7th and Auer now sliding down the order and about to be passed by Kvyat and Tincknell.

Kvyat began pushing again once it all calmed down, and then Müller obligingly went missing to no one’s great surprise. That widened the gaps even further at the front though, and it now became very processional at the front of the field. Sims set a new fastest lap as he tried to chase down Derani, but it wasn’t looking likely to happen and he would apparently have to settle for 3rd.

However, in the pack there was still drama, with Auer losing places to Giovinazzi and Blomqvist, and Goddard getting into a full blown scrap with Nissany for 17th. All of this was further complicated by Auer dropping down the order like a stone, before finally pitting.

By now there were just 20 of the original 27 cars left on the track rather than littering the scenery or loitering in the pits. It’s as well there were plenty to start with, the way things were going. It looked like there might be even less cars left when Lewis and Gilbert began disputing 11th place with single-minded ferocity, and then Giovinazzi started trying to mix it with them too. This was getting a bit desperate frankly. It ended when Lewis finally got ahead and was able to put some clear air between himself and his Antipodean team-mate, which was as well for everyone’s nerves.

At the front though, Marciello was still a comfortable leader, with Derani, Sims and Lynn all leading pretty lonely races behind him. The same could not be said for King who now had a train containing Rosenqvist, Kvyat, Tincknell, van de Laar and Mardenborough all in line astern waiting for someone – anyone – to make the first mistake.

That man turned out to be Mardenborough, who made a move on van de Laar only to end up bouncing over the kerbs in a very disconcerting manner, a mistake that cost him two places as both Lewis and Gilbert slipped past him. Meanwhile, Rosenqvist had finally found a way past King, with around 6 minutes of the race left to run. King immediately fought back though, and retook the place. They were both lucky to survive the encounter though, and Rosenqvist ran into the rear of King’s car, making contact that saw the front wing of the Mücke car flex alarmingly.

And that was it despite a very smoky moment from Sims as he locked up all four wheels in his efforts to catch the lead pair. Marciello was home and dry, despite Derani’s contention that the Italian had definitely passed him under Safety Car conditions.

Marciello had kept his championship hopes alive: “It means the championship is still on so I still need to keep focused on it. It was really important to win today to get a gap between Felix and me.”

Derani was quietly angry at what he felt had happened; “We had a much better 2nd qualifying and kept the best tyres for this race but could not use them. It is good to be in the points but the Safety Car marker was out and I was in front so I don’t know what happened there. We need to see.”

Sims felt he’d had a mixed run to 3rd: “It was a little bit dreadful in the first couple of laps when I was fighting with Alex Lynn. I got a bit out of control but I picked it up and carried on. The pace was good but credit to ThreeBond and T-Sport to show we can win races. It was qualifying that scuppered my chances of winning this weekend.”

Fastest lap of the race was set by Sims. 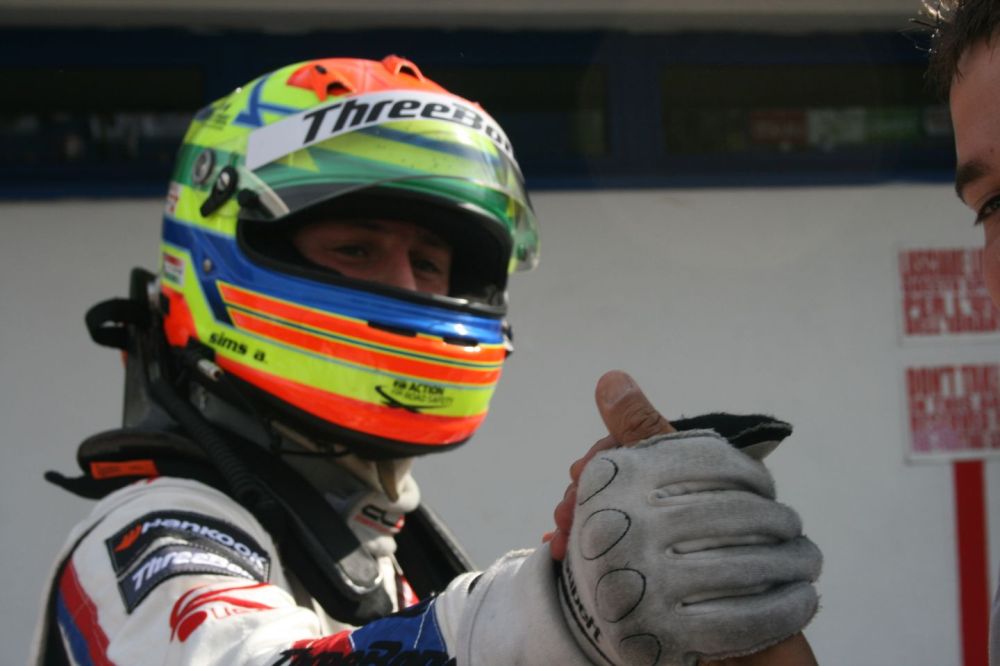