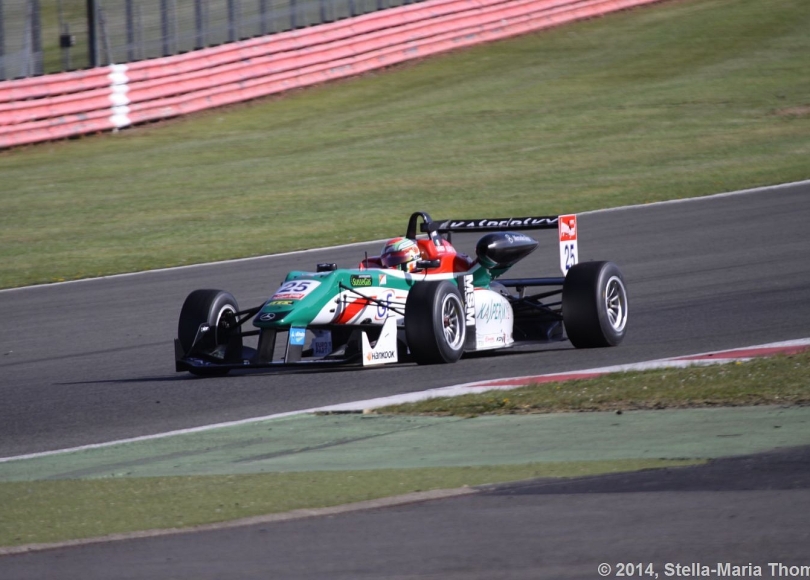 Race Report – Round 3 (Race 3)
Silverstone this morning saw the third winner from three races in the European F3 Championship and the first all-rookie podium in a very long time as Antonio Fuoco (Prema Powerteam) waltzed away from the rest of the pack, leaving yesterday’s Round 2 winner Esteban Ocon (Prema Powerteam) to lose 2nd to a hard-charging Max Verstappen (Van Amersfoort Racing) after a very committed move from the young Dutchman.

At the start Verstappen was more than a little slow off the mark on the formation lap, while Jordan King (Carlin) was indulging in a spot of wheelspin to try and warm his tyres up. Given how cold the air was (grid girls wearing four pairs of tights under their yellow Lycra suits was the norm) this seemed like intelligent behavior. As the field lined up on the grid for the third and final time this weekend there was a great deal of locking up going on.

When the lights went out Ocon was very slow off the line, handing the advantage to Fuoco, who was not slow to take what was offered, tearing off into the distance while Ocon had to hold off Tom Blomqvist (Jagonya Ayam with Carlin) who had a very serious look up the inside of the French teenager’s car before thinking better of it and slotting back into 3rd. Verstappen was up to 4th with King up to 8th. Towards the front of the grid also, Antonio Giovinazzi (Jagonya Ayam with Carlin) made a dreadful start and lost several places before he’d even managed to get off the line.

Someone who didn’t make a bad start was Felix Rosenqvist (kfzteile24 Mucke Motorsport) who started 14th but was 9th and in the points by the end of lap 1 after a superb getaway. After a difficult qualifying session for the Swede, where the team struggled to find any kind of grip, Felix was having another character building weekend – given how many of these he has had, one can’t help but think his character is about the size of a small country by now.

As the first laps developed, Ocon tried to fight back for the lead but Fuoco resisted for all he was worth, and Blomqvist kept on coming, which left Ocon with severely divided focus as he couldn’t afford to lose another place. Meanwhile there were yellows at Aintree where Jake Dennis (Carlin) had gone off, and right at the back Richard “Spike” Goddard (ThreeBond with T-Sport) was pretty much last having tangled with a bogged down Mitch Gilbert (Fortec Motorsport) at the start. The upshot saw both of them pit and Goddard rejoin.

A couple of laps later and Rosenqvist muscled his way through to 8th while just behind him Felix Serralles (Team West-TecF3) and Gustavo Menezes (Van Amersfoort Racing) were fighting for 12th. With tyres perhaps more worn than was wise, some drivers seemed to be having problems with grip – or more precisely lack thereof. Fuoco seemed to have no such issues and was now steadily building up a gap over Ocon. The order behind him had now changed though, as Verstappen dived through to claim 3rd from Blomqvist.

The Carlin driver tried to come back at the Dutchman but was badly boxed in behind the Prema pair and couldn’t make it stick despite having pulled alongside the Van Amersfoort car. He backed off and settled back in to 4th, believing that the move had been made under yellow flags. Later the officials would think otherwise and would take no action against Verstappen. Elsewhere people were running wide all over the shop, with Felipe Guimaraes (Double R Racing), in particular, going a long way off onto the grass before he could recover.

Taking the Brazilian as an example, shortly thereafter, Blomqvist did much the same on increasingly degraded tyres as he came under pressure from Nicholas Latifi (Prema Powerteam), the Canadian much more confident this year than he was last year it seems. Meanwhile Verstappen was closing in on Ocon and looking very interested in 2nd. We now had three rookies in the top three, which made a bit of a nonsense of the accepted wisdom that F3 is always a two-year plan if you want to win. Fuoco was now pulling out an ever larger gap as Ocon started to be worried at, terrier fashion, by Verstappen.

The top three were now also well clear of 4th place, Blomqvist acting like a stopper in a bottle. It looked a lot like the Carlin driver was really holding the rest of the pack up. Latifi in particular really wanted to pass and was trying really hard to get the better of the more experienced man up ahead. In the same pack Lucas Auer (kfzteile24 Mücke Motorsport) managed to pass Ed Jones (Carlin), while Rosenqvist ran very wide as he fought his Dallara to a draw, losing places to both Giovinazzi and King.

Just to add to the fun, Roy Nissany (kfzteile24 Mücke Motorsport) and Alexander Toril (ThreeBond with T-Sport) were having a bit of a scrap which eventually went the Spanish driver’s way, and ended with Nissany spinning out of 14th place. The move of the race, though, came when Verstappen caught Ocon as they ran into the Loop. Verstappen jinked to the outside, then shot through on the inside, having sold the Frenchman a dummy. Ocon tried to get the place back but Verstappen was having absolutely none of it. It was excellent driving from both of them, but 2nd was now Verstappen’s without a doubt as he started to pull away from the Prema driver.

With over half distance gone, Fuoco’s lead was starting to look a bit shaky as Verstappen began a pursuit of the tiny Italian. Fuoco wasn’t hanging about though and was quick to respond to the threat, setting a new fastest lap of the race as he did so. Shortly after there was a bit of a reshuffle in the pack, when Jones spun and dropped himself to 16th. That let Serralles into the top ten, and helped Rosenqvist no end as well, improving the Swede’s mood no end. If only Blomqvist could have been so fortunate. His tyre induced misery wasn’t over yet as Giovinazzi got the drop on him at Stowe, demoting him to 6th.

Interestingly, as other people went off the boil for whatever reason, Rosenqvist continued to make progress, fighting Auer for 8th and finally finding a way through in the closing stages of the race. He benefitted further from the tribulations of King as the Carlin driver came past with a broken front wing, flapping ineffectually and presumably depriving the driver of any grip whatsoever. It was enough to let Rosenqvist and Auer through for 7th and 8th respectively. The black and orange flag was frantically waved at King, but he was determined to hang onto something in the way of points if he could and was not about to come in to get the wing fixed with so little of the race left. He stayed out and would be summoned to the Clerk of the Course afterwards to explain himself.

Meanwhile, another driver in receipt of a warning – this time for driving standards – was Beretta, who had caught up with Nissany, and seemed to think that the best way to overtake was to keep hitting his opponent. The stewards were unimpressed! In addition to all of that, Riccardo Agostini (Eurointernational) made a rapid pit stop, while John Bryant-Meisner (Fortec Motorsport) was warned for driving standards, as was Dennis van de Laar (Van Amersfoort Racing).

Just in case that wasn’t enough for you the battle for 10th got a bit hair-raising as Menezes got over-ambitious, before spinning out from 10th place and ending up back down in 18th, thus throwing away the chance of a point.

And so Fuoco, to the joy of his flag waving fan club, claimed his first victory of the season. “The start was fantastic and I overtook Esteban. My race pace was good and I was not having tyre problems like yesterday. With two new tyres today it was better. I got in front and there was no problem for the first five laps, thanks to the Prema team and my engineer. The championship is long, with 33 races and although this weekend was really good, at Hockenheim our testing was really fast.”

Verstappen was happy with his first “full” podium and though the weekend had improved immensely: “The first race was not what I had hoped for and in race 2 the start was not so good so I learnt a lot for race 3. There was a lot of front tyre degradation but the car worked really well and I overtook Tom Blomqvist. I fought Esteban for the second place and he was much better on the straight, but then Esteban had a little moment and I took the chance, otherwise it’s very difficult to pass here. For Hockenheim I like the track and the team was fastest there. My strength is to be fast immediately and on the pace straight away.”

Ocon was ruing the start, but at least leaves here leading the championship. “It’s been a good weekend, but Antonio got a better start and it is difficult to pass here. We got a bit too close and I destroyed the front left tyre and lost pace. We need to work a little bit to improve. At Hockenheim the team was really good there last year and I won my first single-seater race there, so it will be really useful. I think we all have the same strong points; we learnt together in karting, we are all quite aggressive and quick on the pace.”

Fuoco claimed the fastest lap of the race.