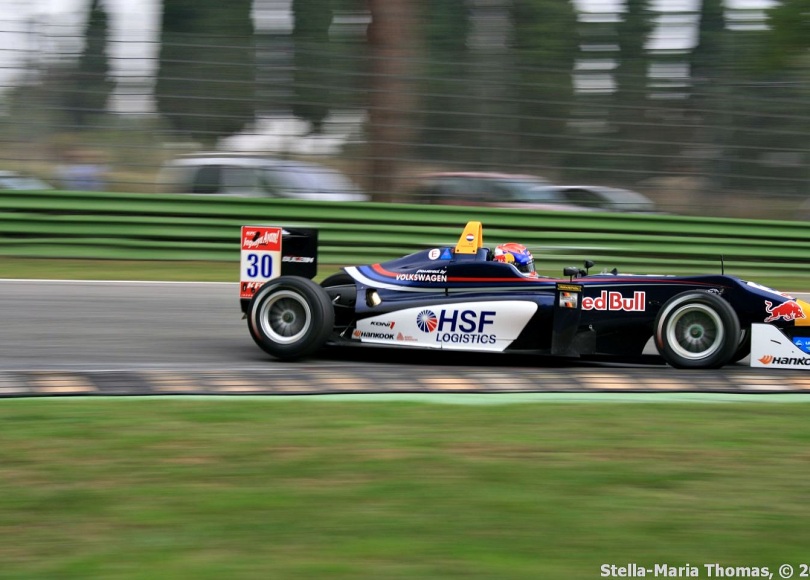 Qualifying Report – Round 25 (Race 1):
At the Nürburgring this afternoon Max Verstappen (Van Amersfoort Racing) proved that RedBull really does appear to give you wings, when the Dutch youngster, who is newly signed to the energy drink’s roster, put in a dominant performance in deeply slippery conditions to claim a convincing pole position, beating out Ed Jones (Carlin) by a hefty half a second, while Santino Ferrucci, the 16-year old American, ended up 3rd ahead of championship leader Esteban Ocon (Prema Powerteam).

With the field reduced to 24 cars, Fortec Motorsport having seemingly run out of drivers with enough budget to compete, and Hector Hurst replaced at Team West-TecF3 by Andy Chang, who has been running in the British F3 series this year, it was always going to be a slightly strange session, and so it proved. Ocon was the initial pace setter, presumably taking one look at the leaden skies and deciding that he’d better get a marker lap in in case the weather got even worse.

As what can approximate to a summer day in the Eifel mountains threw everything bar snow at the field the session was quick to come alive. Ocon kept on pushing to be quickest, coming round 1.4 seconds ahead of his Prema team-mate Nicholas Latifi while it all kicked off behind them. Lucas Auer was showing well in the early stages too, the kfzteiel24 Mücke Motorsport driver in 3rd just ahead of his team-mate Felix Rosenqvist. In 5th at this point was Tatiana Calderon (Jo Zeller Racing), just as she had been in free practice.

Another lap and Verstappen and Ferrucci both edged ahead of Ocon, Verstappen claiming pole with a time in the 1:41s. Seconds later Ocon joined him, but was unable to get the better of the Dutch youngster. And then came a stoppage when Tom Blomqvist (Jagonya Ayam with Carlin) managed to fall off on his out lap, thus suggesting that his luck has reverted to bad again. Having said that, he did manage to recover and make it back to the pit lane.

The top ten at this stage was Verstappen, from Ocon, Ferrucci, Antonio Giovinazzi (Jagonya Ayam with Carlin), Jones, Jake Dennis (Carlin), Latifi, Auer, Rosenqvist and Calderon. As soon as the errant Blomqvist was clear of trouble there was a mass rush for the track, which was now slightly less damp (though not what you might describe as dry). Only Blomqvist, Jordan King (Carlin) and Chang hadn’t actually set a time, but a lot of the field were quite a way off the pace with less than a handful of flying laps to their names.

Ocon was still not hanging about and his first flying lap after the restart was enough to put him back on provisional pole, but he didn’t get to hang onto it for long. Jones deposed him, only to be pushed back in his turn by Verstappen who was now 0,8 seconds clear of the pack. Ocon fought back to edge into 2nd, ahead of Auer, while further down Calderon was back up to 8th, and King’s first lap in anger was enough to move him to 5th.

Meanwhile Blomqvist had now joined the session properly, but as he was currently 24th and there was not much time left, it seemed unlikely that he would provide a serious challenge to the leading contenders. It was left to other Carlin drivers to impact on the top ten, as King and Dennis scuffled over 5th, while Ferrucci was busy proving that Eurointernational need a good driver to make their car look good, the youngster edging back into the top 10 again (in 7th). Elsewhere Rosenqvist was busy trying to salvage something from what has not exactly been the season he might have hoped for, climbing the order to 6th, at least temporarily.

As a vaguely dry line started to appear, Blomqvist went 12th, but all eyes were now on Verstappen as sector after sector went purple and he came round to move the pole time even further out of everyone else’s reach. There was a blink and you miss it moment when Auer went quickest of all, but he was immediately displaced again by Verstappen who could seemingly do no wrong this afternoon. Behind them, King set a time that put him 3rd, while Verstappen went even faster to open the gap to 1.4 seconds. Could anyone catch RedBull’s newest recruit?

As it turned out, no they could not. Ocon could only manage 3rd, taking the place from Ferrucci, while early season favourite, and Ferrari protégé, Antonio Fuoco was unable to get round in a time that would put him closer to the from than 7th. The challengers were running out of time. Verstappen improved yet again and Auer did too, slotting into 2nd, but Verstappen was a distant 1.029 seconds quicker with the clock ticking down.

Fuoco took advantage of the slightly improved conditions to go 2nd, from Auer and Ocon, but he was still 1 second slower than the pole man. There would be no challenging the Dutch youngster, not this time anyway. An improvement from Ocon reduced the gap to 0.8 seconds, but then Jones went quicker than the championship leader, with Ferrucci also showing a maturity beyond his years to claim 3rd on the final lap of the session.