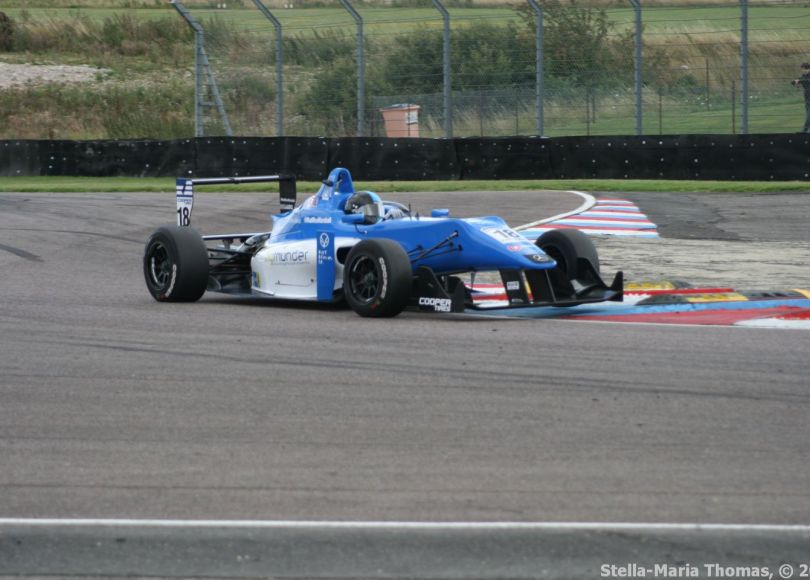 A short sharp shower prior to the race made tyre choices a mite uncertain but eventually, after two green flag laps, the entire field opted for slicks, which made the initial stages of the race rather more interesting than pole man Max Marshall (Double R Racing) might have liked. At the start, he bogged down slightly, which allowed Li to get alongside him for the lead, or at least what was the lead until Cao simply powered past the pair of them into a lead which was never challenged again, despite almost stalling on the grid. That put Cong 2nd, and left Marshall 3rd in his second ever F3 race. Behind him, Rao was on the move, shutting out Camren Kaminsky (Double R Racing), before setting off in pursuit of Marshall.

A further reshuffle saw Rao pass both Marshall and Li for 2nd, the two Fortec cars he almost immediately opening up a gap to the other three blue cars, with Li back behind Marshall, and Kaminsky on the tail of the pair for 3rd. They were glued together for lap after lap, Li trying everything he could think of to get the drop on Marshall, and the newcomer resisting manfully for a number of laps. Li finally saw his opportunity on lap 5, and the pair arrived at the Chicane side by side, Li slipping through and into 3rd.

Meanwhile, Cao continued to press on, with Rao in pursuit, and Li catching them with an impressive series of fastest laps. Marshall, meanwhile, was now under pressure from Kaminsky, who was sitting right in his wheel tracks despite the great gouts of flame the Double R car was spitting out under braking. Two laps later, Kaminsky went for it on the run up to the Chicane, and was through. That was not the end of the battle between the Double R boys though. Marshall was not about to concede the position cheaply, and he stayed with the American for several laps, hoping to force a mistake from him.

At the front Cao continued on his way to the flag, though Rao seemed to be catching him. Li was certainly closing on Rao, which meant the Fortec driver had to worry about what he could see in his mirrors as well as what was happening up ahead, which meant his challenge for the lead evaporated in the later stages of the race.

With the track becoming ever drier the times were improving lap on lap and Marshall stopped biding his time, making a move on Kaminsky into the Chicane on Lap 13. Kaminsky tried to hold his position, but Marshall was well and truly through and almost immediately started to put some distance between himself and the 5th placed car.

As the race wore towards its end there were some ragged moments from both Cao, and Marshall, and Li edged ever closer to Rao, but ultimately it was all over bar the shouting, Cao coming home almost 4 seconds clear of Rao, even when Rao really speeded up in the final few laps. Li was 3rd, from Marshall and Kaminsky.

The fastest lap of the race was set by Rao on the very last lap.