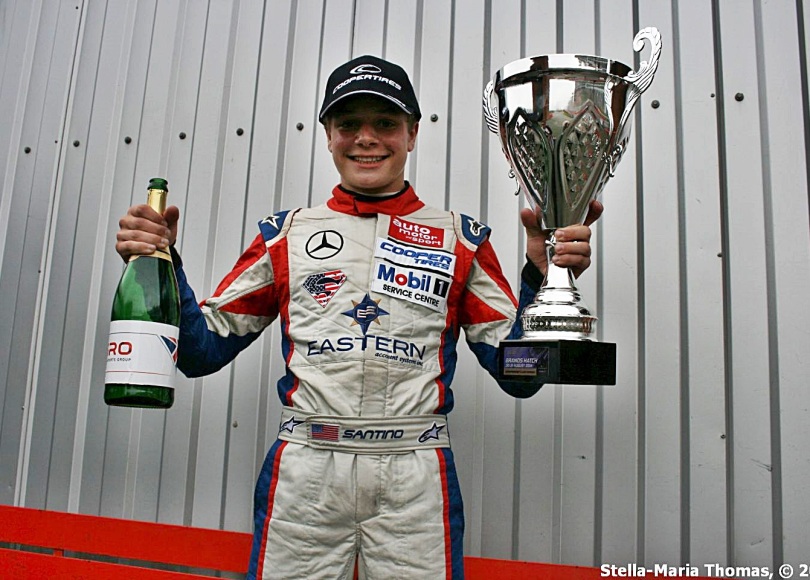 In hot, sunny conditions, Santino Ferrucci (Fortec Motorsport) again put in a copybook drive from start to finish, to claim his second victory of the weekend in the British F3 Championship. Series leader Hongwei Cao (Fortec Motorsport) finished 2nd to give himself a 15 point lead over Matt Rao (Fortec Motorsport) heading into the final meeting of the season in two weeks time, though Rao, who finished 3rd, clawed back a point with a late fastest lap of the race.

As the lights went out, Ferrucci again made the best possible start, out-dragging Cao off the line, to move ahead by the time they reached Paddock Hill Bend, and that was pretty much the last Cao saw of the young American FIA F3 European series driver who was simply here to get accustomed to his new team prior to the next FIA rounds at Imola in October.

Meanwhile Li Zhi Cong (Carlin) was holding onto 3rd, with Rao just behind him in 4th and unable to find a way past to get on terms with Cao. This might prove costly for Rao if he couldn’t find a way round the Chinese driver. While all this was going on Dan Wells (Double R Racing) was catching up with Rao in a race that had to be shortened by 5 minutes to enable the day’s programme to be completed within the noise curfew limits.

However no one could catch Ferrucci it appeared, the youngster setting a new fastest lap of the race as he sought to put victory beyond the reach of Cao. Although it was probably too hot now for really rapid times, and the tyres were certainly now too far gone, it didn’t stop the youngster from trying. It also didn’t take him long to open up a comfortable gap where he could then relax and try to conserve his tyres in case he needed them later – and to prove to the team that he could if he had to!

Cao was now 2.5 seconds adrift and Li was still holding up Rao, with Wells beginning to fall away, then Camren Kaminsky (Double R Racing) and last but not least Max Marshall (Double R Racing), the Formula Ford regular and last minutes fill-in in this series, the latter feeling his lack of race fitness (though at least this time round in possession of a gear lever, which he found helpful).

As Ferrucci continued on his untroubled way to the podium, his team-mate was through on Li an up to 3rd after Li hit trouble on lap 7 and dropped out of the race. That left six cars, which was at least plenty for a podium. Again, this was now becoming a very processional race with cars so spread out that it must have felt to some of the drivers as if they were racing alone out there. Not so Wells, at least for a while, as Kaminsky was initially able to stay with him, but even that challenge evaporated after a while.

Only towards the end did Rao start to make any impression on Cao, but he’d left it too late. It might have netted him the point for fastest lap of the race, but it didn’t dislodge Cao from second place, and the full 25 points for a win, as Ferrucci had opted out of scoring points. That means that two weeks from now, with 65 points maximum up for grabs, Cao is 15 points to the good, which is a workable advantage.

Meanwhile, Ferrucci was delighted with his second win of the weekend, and had enjoyed Brands Hatch enormously. Cao was content with 2nd, and Rao at least felt that 3rd kept his championship hopes alive. Wells finished 4th, earning the Man of the Weekend award, with Kaminsky 5th and Marshall 6th and last.

*opted not to score points