Race Report – Round 2:
This afternoon’s race at Silverstone saw George Russell (Carlin) win the battle of the rookies from Charles Leclerc (Van Amersfoort Racing) to take his first FIA F3 victory. In 3rd place, with minor damage to the front end, was Antonio Giovinazzi (Jagonya Ayam with Carlin), the latter leading the championship after two races. The story of the race, however, was the charge from the rear of Felix Rosenqvist (Prema Powerteam). The Swede was relegated from pole position to dead last for a technical infringement, a loose screw meaning that the bodywork on his Dallara proved to be wider than the maximum permitted width when it was checked after second qualifying. It was a harsh penalty but for technical issues there is no alternative. 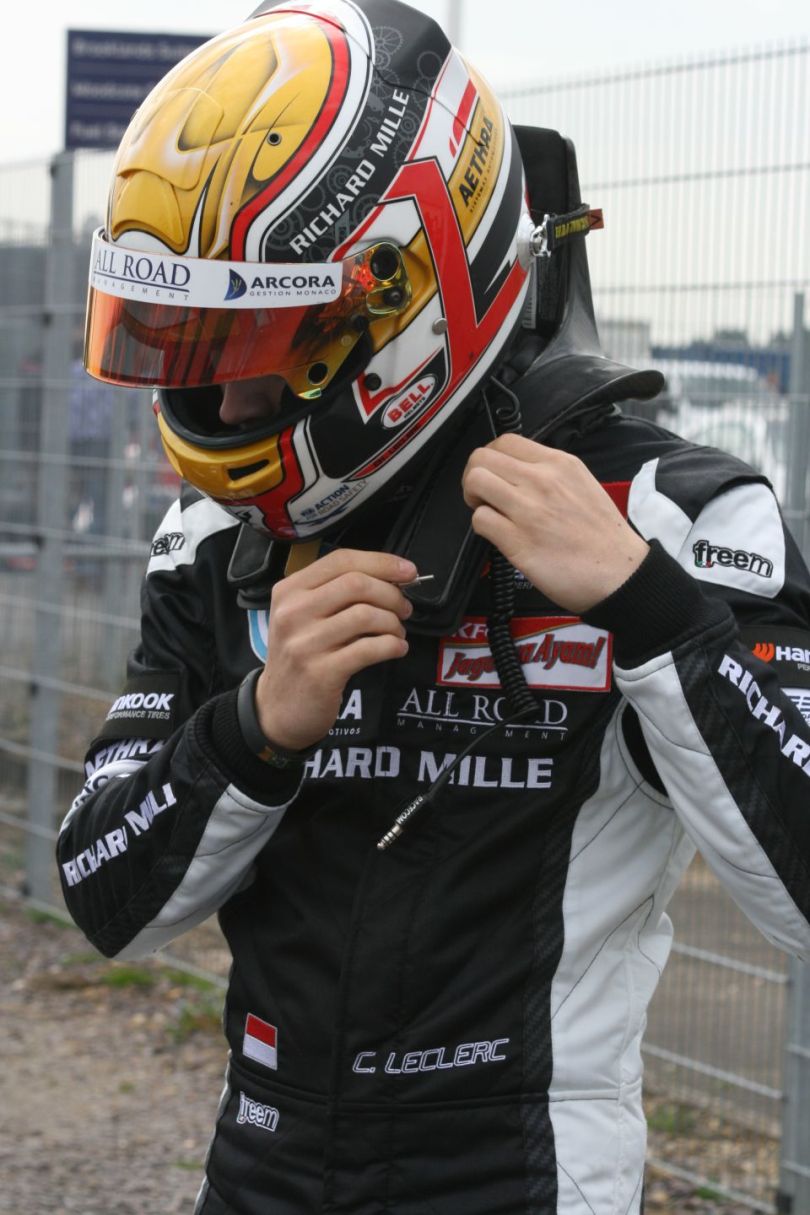 With an all rookie front row (Leclerc inherited pole when Rosenqvist was penalised and Russell started alongside him) there was a moment of worry before the start, though some of it was down to a frantically waved yellow at the back, and some by the fact that rows 10 and 11 seemed to have got themselves out of position on the grid. There was a massive wait as Rosenqvist took his own sweet time lining up in 35th and then finally the lights went out and the race started. At the front, Russell made by far the better start despite slightly damp track under his left hand wheels, while Leclerc seemed to bog down on the line. That let the Englishman into the lead though to be fair to Leclerc he did attempt to get back in front. At the same time Giovinazzi thought he’d seen a gap and he tried to get between the two of them. They responded by closing the door and the Italian backed off with damage to the front wing.

At the back Rosenqvist had decided the best strategy was to bury the gas pedal and go for it and he was five places up before he even crossed the finish line. It then became a question of hoping for the best on lap one, and trying to avoid any trouble in the pack. Some drivers in that sort of situation would give up and would trundle gently round taking no risks. Rosenqvist is not that driver, and may well not know the meaning of the words “taking it easy”. He certainly never quits, no matter the odds.

Just ahead of the charging Swede, the expected trouble did happen when Michele Beretta (kfzteile24 Mücke Motorsport) tangled with Tatiana Calderon (Carlin), leaving her distinctly short of wheels and stranded on the track at Village. Also involved were Sam Macleod (Motopark) and Sergio Sette Camara (Motopark). Their little fracas prompted Rosenqvist to 18th, but also meant we needed the Safety Car yet again. Russell, having opened something of a gap, was forced to see it vanish as they settled in behind the Audi for several laps.

At the restart Russell held his nerve, and his lead, while Rosenqvist was instantly on the offensive again. In the pack Tveter was forced onto the defensive as he tried to hold off Schiller, but the German proved too much of a handful and Tveter lost that place and another to Albon, and then started to drop down the order into the clutches of Rosenqvist. Rosenqvist meanwhile was looking hard at Boccolacci for 15th, after which he would be in pursuit of the Ferrucci/Ilot battle for 11th.

Boccolacci in fact passed Tveter, towing Rosenqvist with him, while ahead of the pack Russell was happily holding Leclerc off, well ahead of the battles behind. Ferrucci meanwhile was now 9th having dealt with Ilot, a mistake from the youngster seeing him lose out to Boccolacci as well. That meant Rosenqvist was looming large in his mirrors, and all he could now do was wait for the inevitable. It wasn’t long in coming, which let the Swede up to 13th, an amazing effort considering he’d started 35th.

While Albon took Schiller round the outside of Vale for 6th, while Rosenqvist was busy setting a new fastest lap, as he set about Boccolacci and Dennis in pursuit of a top ten place. What followed was a tense fight between team-mates as Dennis resisted for all he was worth and eventually Rosenqvist found his way past at Stowe. Boccolacci tried to capitalise on the move and also went through as Dennis ran wide and clattered over the kerbs. That unsettled Boccolacci and he ended up losing places to Ilot and Günther as a result.

Ahead of Rosenqvist now was the three way fight for 7th between Jensen, Fittipaldi and Schiller. With 15 minutes of the race left to run it had suddenly become a four way fight. Almost overlooked at the front, meanwhile Russell continued to lead in a calm and unhurried way, far enough ahead of Leclerc to be able to stay calm. Giovinazzi was running with Stroll on his tail but was hanging on to his podium position, as the clock steadily ticked round towards 35 minutes and the chequered flag.

Boccolacci and Dennis were now having a bit of a set to and it eventually ended with Boccolacci spinning away at Luffield after the pair made contact. That caught out Pommer and the whole thing became very messy with Dennis ending up stranded track side on the final lap of the race after he went on the attack trying to pass Ferrucci. Just ahead of all that, Fittipaldi’s attempts to delay Rosenqvist let Schiller through, and did little to stop the Swede either, as he swept through at Copse to claim 8th. That left Schiller who detained him only momentarily and he was 7th which he would have to settle for. Albon was too far down the road and so the recovery drive was at an end.

Afterwards Russell was pleased with his win: “Conditions were a lot better this time. I got a good start and was in the lead after the first lap but the safety car made it easier for those behind to catch up. I got a good restart and then I managed to maintain the pace .It was a good win for the team. Testing went well but I didn’t know what to expect in the race so it’s great to be here.”

Leclerc admitted his start wasn’t what it should have been: “I didn’t have a very good start then tried to catch up in the middle but it was not possible to overtake. My tyre was graining on the front left but it was a good race in general. I was 7/10ths off George but it was hard in the high speed corners.”

Giovinazzi felt he was lucky to hang on to 3rd: “I got a really good start but then I touched George’s car and damaged my car a little. My wing was not really straight so the high speed corners were difficult. But I’m happy with another podium today and hope tomorrow I can do better. I was fast the first 5 to 6 laps and happy with car – so we’ll see tomorrow morning…”

The fastest lap was set by Leclerc.