We like a post-theatre meal and with a visit to the Almeida Theatre in the afternoon, this was the perfect opportunity to try out the Gilbert Scott restaurant, especially as I had an offer for the three course set menu plus a house cocktail for £29 per person stashed away.

With a couple of hours to kil between the performance ending and the table booking we decided that the Champagne Bar at St. Pancras Station was the ideal place to start out. However, once we got there we decided that rather than sit “outside” in the station, we’d go into the St. Pancras Grand, which is the restaurant section across the walkway from the Champagne bar. It’s rather splendid inside with a lovely old-fashioned interior, all 1920s art deco, and would put us in the mood for what was to come. In something of a holiday mood, we opted for the Champagne flight and were duly presented with three glasses of Louis Roederer Champagne, a non-vintage (the Brut Premier), a vintage (the Blanc de Blancs Vintage) and a rosé (the Rosé Vintage). Of the three we found the Brut Premier to be the best, and would recommend it for its drier nature set against the other two. 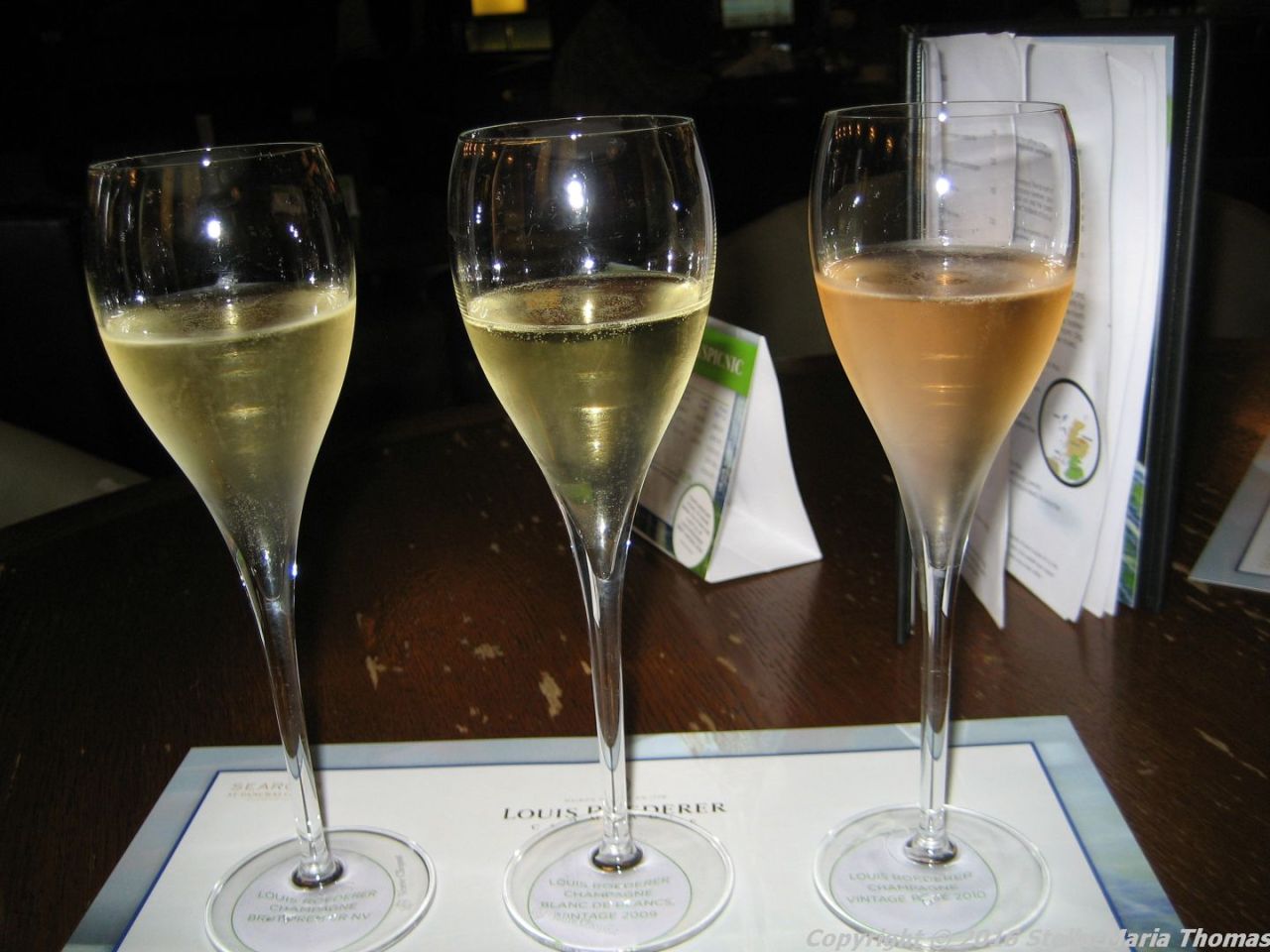 We walked the short distance from Searcys to the demented mock-Gothic pile, from the pen of Sir George Gilbert Scott, that is the St. Pancras Hotel! Why it was ever allowed to fall into near-terminal disrepair the way it was was completely beyond me to explain. Five years after it reopened after an extensive refurbishment we would finally get to see inside. We were met at reception and shepherded through to the bar of The Gilbert Scott by a charming member of staff who took us via the grand staircase, explaining some of the history en route, and then settled in to try out the cocktails.

It turned out that our deal included only the 1873, a pretty concoction of Bombay Sapphire gin, apple, cranberry, and rhubarb, “charged with CO2”, which was a bit unfortunate as Lynne doesn’t like rhubarb.

We ordered one with rhubarb for me and one without for Lynne. The obvious thing to do would have been to suggest that perhaps we could have an alternative and pay the difference but sadly that seemed to be beyond any of the staff to fathom, so a rhubarbless version it had to be. It may have been down to the English-language skills as it also proved difficult to source the menu to study in advance (essential as this is one of those restaurants that wants your table back in two hours, something I detest as a diner – in fact I knew this was the case but for once decided to let it go as more than once this has been communicated to me but we’ve still been there over two hours later with no need to leave – and is in fact a rant for another day). A second round of cocktails followed as we enjoyed the ambience and the opulent decor. 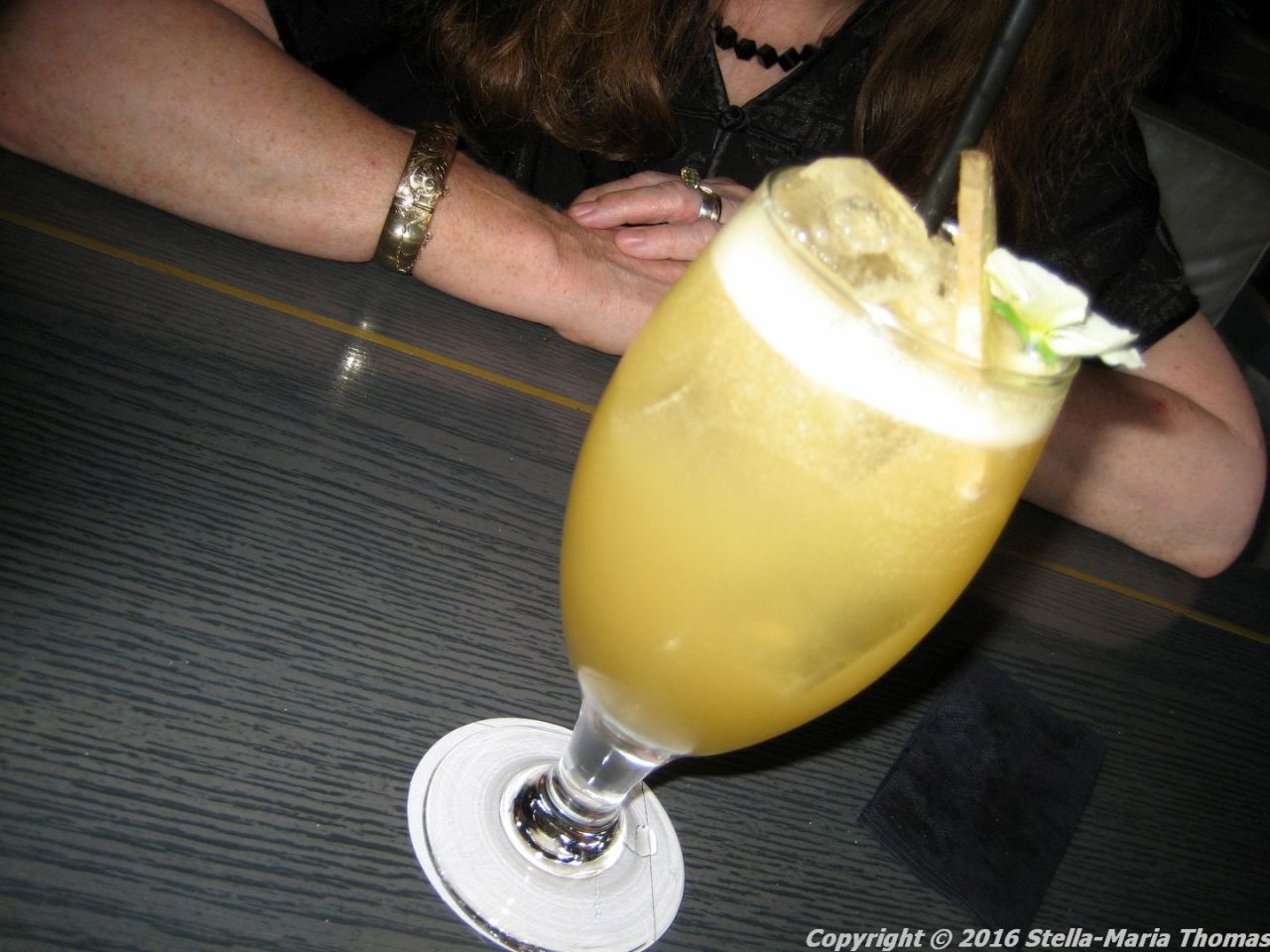 Thereafter we were led in to dinner and seated nicely in the middle of the restaurant. We started with Dorset crab, pickled carrots, cashew nuts and coriander for Lynne (at a supplement of £4.00).

And chicken liver parfait, cherries, granola and brioche for me. 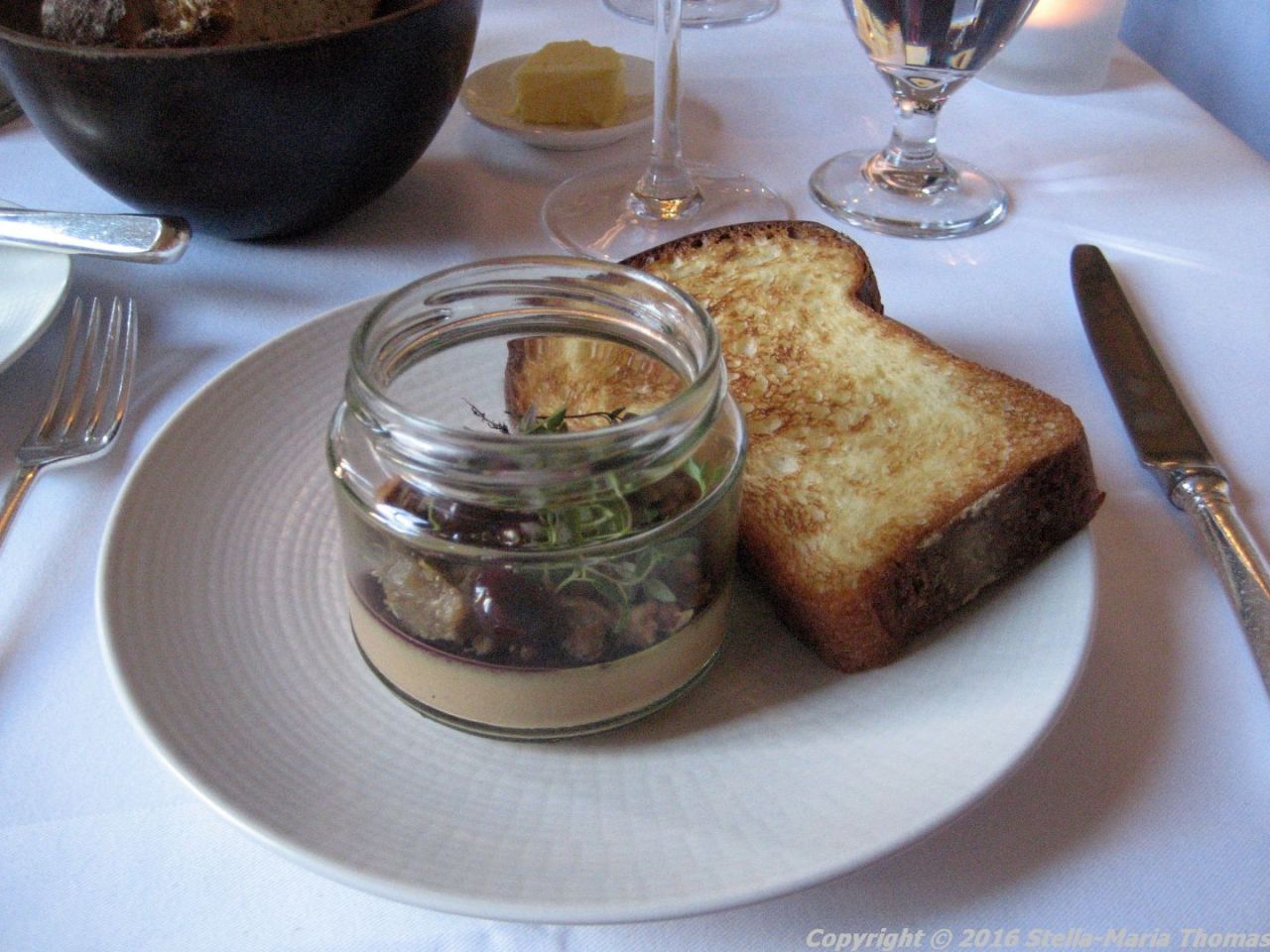 Both were very good, and well executed. The flavours were spot on and we were off to a good start! Next up I’d opted for the superb South Coast roasted plaice, spinach, crushed new potatoes, and Isle of Barra cockles, a lovely, fishy combination, fresh, perfectly cooked and quite a lot larger than I had expected.

Lynne had the grilled Lake District sirloin, Tropea onion and béarnaise sauce (which attracted a supplementary charge of £8.00 – what can I say? She’s not a cheap date).

There was some excellent bread included as well. 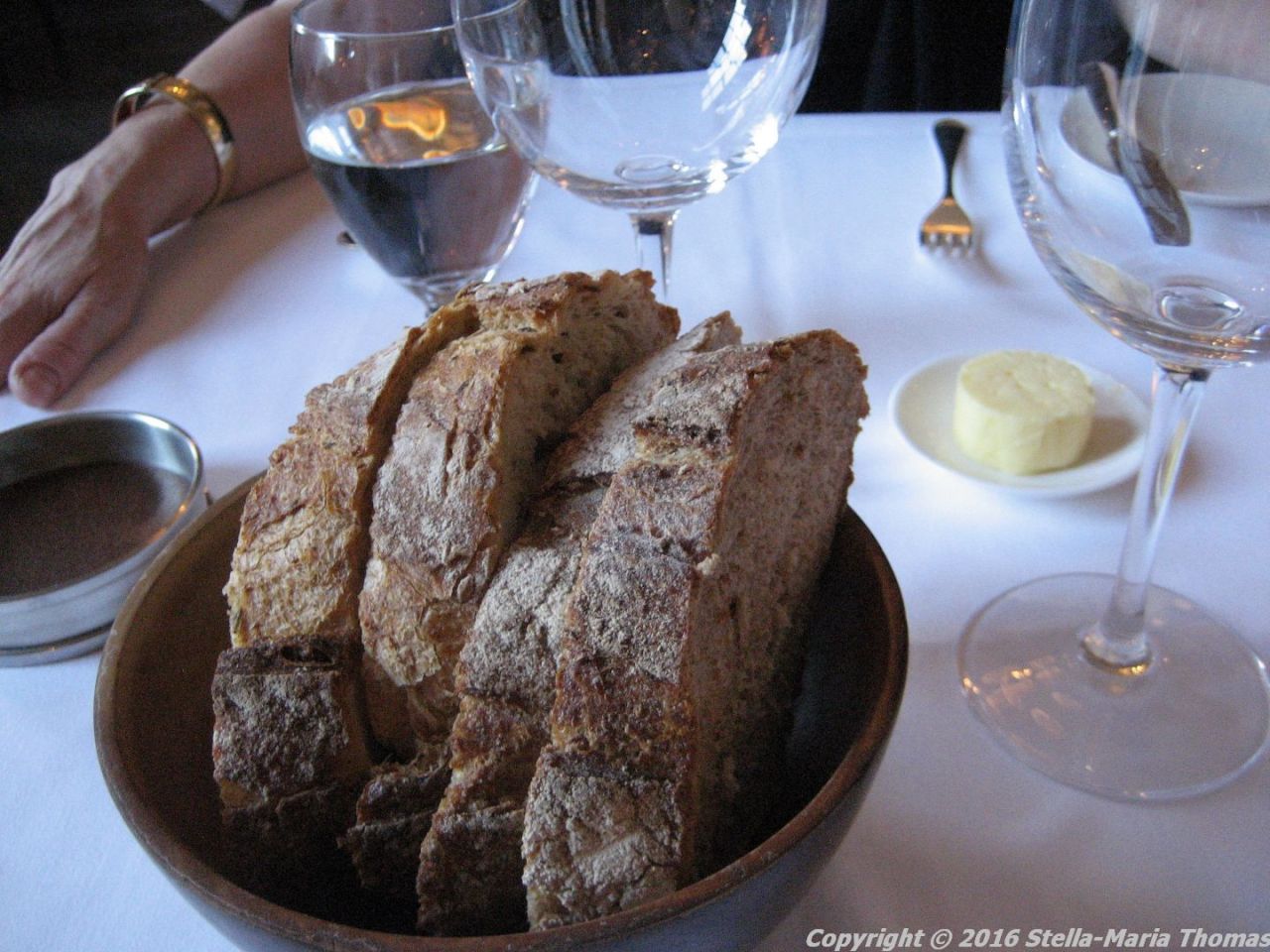 Desserts were almost too much for us to manage, but we struggled manfully on!

Raspberry, lemon, and poppy seed was complex, fruity and called to mind cakes in Viennese coffee houses in my past.

Carrot cake, yoghurt sorbet and pecans was far lighter than it looked and very, very tasty.

The bill was rather more painful than you might expect given the menu deal was £29.00 each for the three courses and the first round of cocktails, mainly due to the wine list which started at what I’ll call optimistic and headed rapidly upwards into nosebleed territory! The house wines start at £29.00 a bottle and at that level there is little choice. You could take you own wines, but “If you are to supply your own wines Corkage is at £45 per bottle based on a maximum of 3 bottles.” I must admit I didn’t know that the ability to wield a corkscrew, even a “waiter’s friend”, was quite such a skilled job, but there you go. So in conclusion, excellent food, a very good wine list, but even by London standards I’d call it over-priced. We drank a Tannat from Bodega Garzón, Garzón, Uruguay at £37.00 for the bottle and while it was a lovely wine it’s hard to feel you’re not being fleeced at that sort of price.

We finished up, paid the bill and left via the staircase again.

Once outside we wandered off to get the train home and while I enjoyed our visit to the Gilbert Scott I suspect we’ll not go back, simply because we like to have a good bottle with dinner but we can’t afford to regularly if it’s going to come out that expensive. 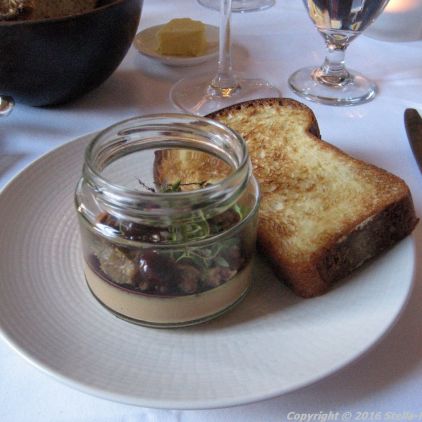 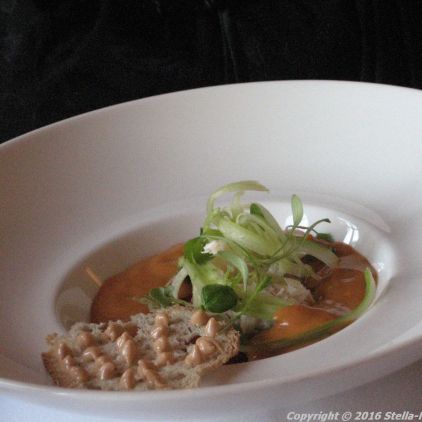 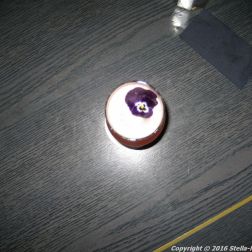 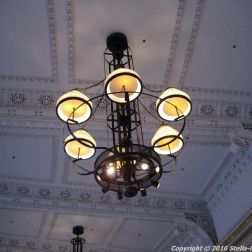 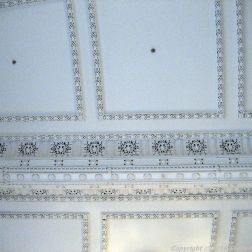 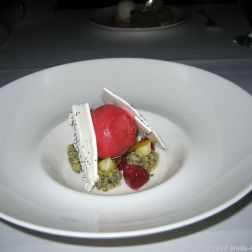 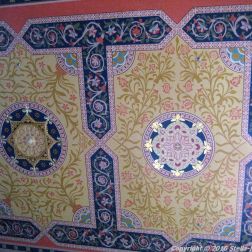