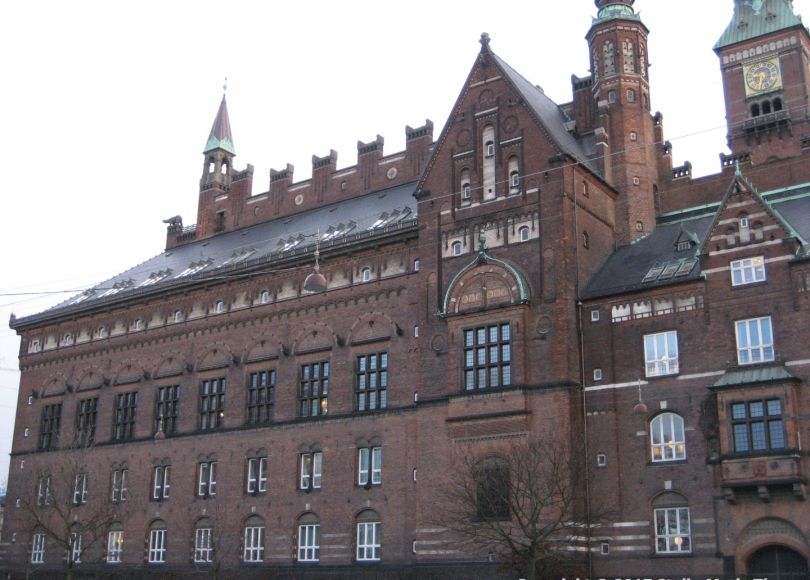 Here are a few more reflections on my first visit to Copenhagen. It’s work not pleasure so there’s not much sightseeing apart from walking about  after a day in the office.

So a second walk in Copenhagen after work took me down past the Tivoli Gardens (closed until April) and to the main square with the town hall, and a lot of interesting buildings. Sadly at that time in the evening pretty much everything was closed apart from the shops but there were still things to be seen, starting with the somewhat bizarre funeral director’s shop near the office, which had a beautifully made wooden coffin centre front in their window. In comparison to the very discreet premises most UK funeral directors have this seemed oddly in-your-face, but perhaps the Danes see things differently. I do know from one of my new colleagues that graves are rented (not that unusual) for 10 years at a time (rather more unusual – the timescales are usually much longer), so maybe they do take a more pragmatic view.

On the subject once again of bicycles, I was amused to see a cycle route sign on the waterfront which pointed to several relatively local routes to destinations in single figure distances, but also Berlin, at 679km. That’s quite a cycle ride is all I can say!

Also on the waterfront I was surprised to see two canoes being paddled along in the dark, lights clipped onto the paddles. If you tried that in London anywhere on the  Thames I’m pretty sure you’d have the River Police on your case before you got thirty seconds into your trip. I realise there wasn’t much in the way of traffic apart from the river bus, but there were a lot of things you could run into moored along the banks, and I can’t imagine the lights (which looked a lot like runners’ headlamps to me) would provide much illumination outside the immediate vicinity. I watched in fascination for several minutes before moving on as I was getting stupidly cold standing still.

Clearly not everywhere was cold, as was apparent from the manhole coevers in the middle of some roads which emitted warm steam (and were pleasant to stand near even if they steamed up my spectacles something rotten)! I assume it’s from drains but may also be some sort of heating system. I need to know more… I also assume that the many basement level rooms are pretty warm. There’s a profusion of buildings where there is a slightly below street level series of rooms, and you step down from the street down short staircases, often with a rail or ramp for your bicycle to be wheeled down. You’re not safe from bikes anywhere it seems!

I was more than slightly taken with the number of pleasant – if empty – squares dotted around the city, which I presume will be full of people in the sunnier summer months, and in addition many of the buildings appear to incorporate pleasant courtyards in the very northern/Germanic style of building. It gives you a green space if you’re lucky, or somewhere to pile up your dead Christmas trees (wrapped in massive plastic bags) if you’re not quite so lucky. I should add that this morning it’s become clear that the trees are then piled up outside on the roadside ready for collection.

There are masses of elegant, lacy, twisting spires. I need to find the buildings underneath them! They’re all over the skyline and they are glorious, each one decorated differently. There’s going to be some sightseeing to do when I’m back here in February for three weeks including the weekends. It’ll give me time to research in advance.

Two other things that struck me. Where do people buy food?! A total of three hours walking around and I saw cafes, and restaurants, and clothes and toy stores, but not a single supermarket. I know now that many employees are provided with lunch free-ish of charge everyday at work (in return for a small tax contribution apparently) but that doesn’t cover everyone. Eventually one of my new colleagues pointed the nearest supermarket out. I would not have realised. All the windows were covered over and there was little to suggest it was any sort of retail outlet. Odd. Almost as if they’re ashamed to exist.