February may not be the best time to visit Copenhagen, especially in a snowstorm, but I didn’t have much choice as my new employers sent me out here for three weeks to complete a gruelling, brain-frying training course. I opted not to fly home each weekend (it would have meant getting in late on Friday and having to turn round and come back on Sunday afternoon, which seemed like a lot of effort) and as the company agreed to fly Lynne out for one of the two weekends (and a good friend asked if she could pay her own way and join me for the second weekend) it seemed like a good opportunity to see more of what appears to be a very attractive and civilised city.

Of course that was bargaining without the snow that started to come down on Tuesday night and didn’t stop for over 48 hours. It made getting out and about in the evenings a bit slippery to say the least – though the training group as a whole managed to slide our way out to a group dinner that night. I’d had a feeling that I probably needed walking boots, but trying to cram three weeks worth of sweaters into my case made adding any footwear a bit of a challenge. I did at least have my wool coat, my nice thick wool scarf and a pair of ski gloves but even so it was unpleasant out there on Wednesday night.

I was determined to get some exercise if only by walking about for an hour or so after class ended, and on the Monday night I did just that, walking for miles around the town and ending up slightly unfortunately side-tracked by a bookshop where I snagged a copy of “Murder in Malmo” to provide a lighter read alongside “Music and Silence”, by Rose Tremain, a novel set mostly in Copenhagen during the reign of King Christian IV and thus a wholly relevant read. I also managed to finally lay hands on a copy of The White Guide, a restaurant guide I’ve been hankering after since last summer. It made what came next much worse in many ways as I returned to the hotel for a somewhat indifferent dinner in the Italian restaurant (which I didn’t try last time I was here – and won’t be trying again). I like cheese as much as the next woman, but I don’t like it when it’s so densely packed into a risotto that you can feel it sticking to your teeth when you take a mouthful and can barely chew for it. It’s fair to say that the only food the Radisson Blu Scandinavia has produced that has managed to impress me so far is the breakfast offering, at least when you can get it anyway, but more of that later!

Sunday night I was so late arriving that I wasn’t interested in dinner anyway. I’d managed to eat in the business lounge at Heathrow so I settled for a tub of honey-roasted cashew nuts and a small bottle of red wine from the mini bar that night. Monday we’ll just gloss over.

On Tuesday night, as mentioned, we were taken to Scarpetta, a small Italian place on the waterfront that is now becoming a trendy place to live. It was a 20 minute walk in what was just light snow at this point, and it’s fair to say that the resulting 5-course menu we were served was very nice, and very good value for money for Copenhagen, by which I mean we got 5 small plates for around £30 per person. They kept the wine coming too, which was not to be sneezed at. The menu was an interesting mix of modern Nordic influences and old-fashioned Italian ingredients, and none the worse for it. We started with a veal tartar, with a scattering of watercress and pecorino, then moved on to a delicate mussel soup, that included scallops, that great Danish favourite kohlrabi and, to complete the Scandi-inflection, some dill. The middle course seemed neatly divided between the two countries, with a risotto of parsley and salt cod, a startling shade of green, with the cod sitting white and striking on top. As a main were were brought a grilled ribeye, done just right, and served with oyster mushrooms (which they translated literally – and rather sweetly – as oyster hats), gremolata and some tiny croutons of butter-fried bread. The only let-down for me was the dessert, a solid, distinctly non-wobbly panna cotta, with vanilla, cantucini and a blood orange sorbet. It only managed OK, as opposed to very good. 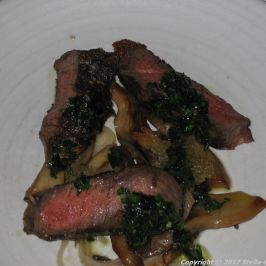 Wednesday night I’d decided I’d test the Paper Island street food market provided I could figure out how to get there. However, the wind was blowing so much snow into my face that I lost the will, turned round, and set off to see if I could find something nearer to the hotel. I was interrupted by a phone call from one of the estate agents our lives are currently infested with, but eventually stumbled upon Adendum, a very pleasant wine bar with a limited menu but a terrific wine list including some mighty fine stuff by the glass. The service was friendly, helpful and welcoming, and I indulged in a plate of cold meats, with some delicious bread, and, after a while decided that I’d go for the cheese plate to finish off with. I might have stayed longer than the three hours I was in there, especially as I was watching the snow pile up outside. The wine was first a cava and then an excellent Austrian Zweigelt, and the ambience was lovely (at least until the couple on a nearby table got into an argument about who would be paying what for their flat when they split up – it was getting rather intense when I left). 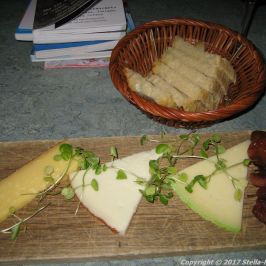 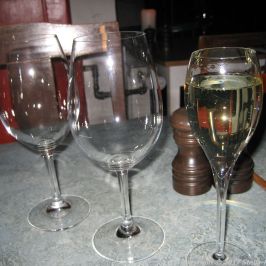 On Thursday I made another attempt to find my way to Paper Island, and once again ended up elsewhere, this time with a trip to No. 2, but not before I’d found another way into town, and enjoyed watching some very small children sledging down a very small hill that makes up one end of the old fortifications. Denmark really doesn’t do hills but at least it seems to do improvisation! No. 2 is again in the renovated riverside area in Indre By and is a very modern space with massive windows overlooking the new Royal Library (the Black Diamond) on the other side of the water. I looked at their menu of the ubiquitous small plates and decided it was too difficult to decide. They’d gone to the trouble of designing a set menu version of the list, and even produced a wine pairing so it seemed churlish not to avail myself of their expertise.

To start there were “snacks”, in the shape of a small piece of fried fish, a deep fried ball of shredded duck meat, and an unctuous bowl of mushroom mayonnaise to dip them in.

There was of course also excellent bread – which seems to be a given in Copenhagen. It does mean you have to be careful not to load up on bread and end up unable to eat the rest of your meal!

The wine pairing began with a glass of Champagne Deutz, Brut Classic which got the evening off to a very pleasant start.

The main event began with salted sea scallops in a bouillon of cured ham and salicornia with a glass of 2016 Sauvignon Blanc, Southern Right Vineyards, Hemel en Aarde Valley, South Africa to match it. This was a very delicate dish, the salt of the ham almost too much for the fine flesh of the scallops. It started to come together in the mouth though, and went very well with the Sauvignon Blanc.

We stayed with fish for the next dish too, that very Nordic favourite of cod. This time it was pan fried with savoy cabbage, turnip and sour kale sauce, the cod a strong contrast to the bitterness of the vegetables and all under a frothy confection of a sauce. Again the wine proved well chosen, this time a 2015 Saumur Blanc, Chateau de Villeneuve, from the Loire.

As a main there came a fine piece of entrecote with beetroot, parsley and smoked marrow, the meat concealed under thin slices of beetroot. Marrow doesn’t taste of much but does offer some fantastic texture and smoking it lifted it even further. The wine needed to have a lot of oomph to cut through the fat of the marrow and again the choice was a good one, this time from South America, a 2014 A Lisa Bodega Noemia, Patagonien out of Argentina was the answer to the question of marrow and meat!

Finally I was presented with a lemon mousse, coated in caramel stripes and accompanied by crumbs of frozen yogurt.This was accompanied by a classic of a wine, a glass of 2014 Sauternes Carmes de Rieussec and by the time I’d finished I was more than happy to stagger gently back to the hotel in the snow, which was finally showing signs of stopping. 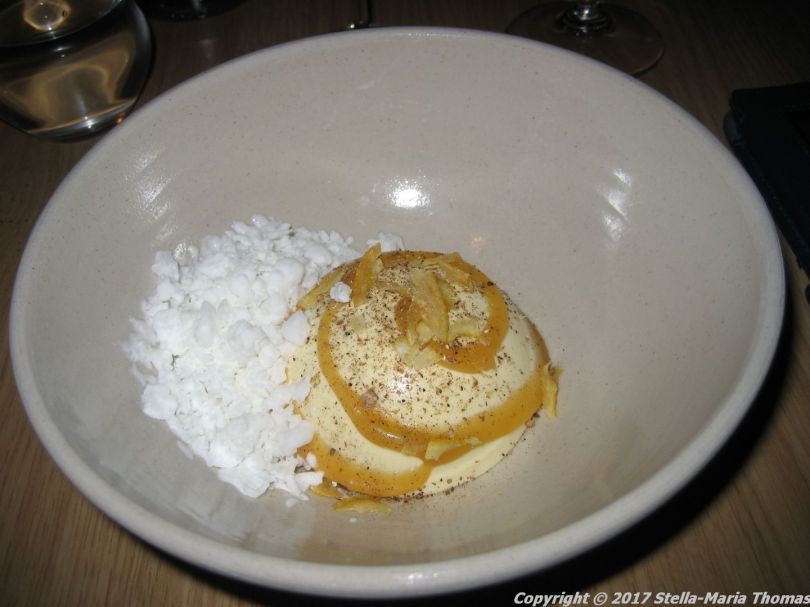 I will happily return to any of the three restaurants from Tuesday, Wednesday or Thursday!