Working now in the City I have access to a lot more choice for lunch than the ghastly chains of Canary Wharf with the once a week street food provided by Kerb. Instead I am now withing walking distance of another Kerb, this one at the Gherkin, the ever-splendid Borough Market (where the traders are much in need of support after losing over a week’s worth of trade due to idiot terrorists), Leather Lane market’s collection of food stalls every weekday, and – as I discovered accidentally the other day – a monthly Lunch Market in front of the Guildhall.

First however was Kerb at the Gherkin (or more officially St. Mary Axe) where a series of visits have netted some excellent food from the revolving roster of stall holders. A recent visit saw me drag a colleague along, because he really needs to get out of the office more often. Hanoi Kitchen provides a fine selection of Vietnamese staples, including the inevitable banh mi, but I opted for their signature dish, the Hanoi Kitchen bun, a pot full of vermicelli rice noodles served on a mound of lettuce, with a hefty dollop of pickled carrots, peanuts and crispy shallots, a scattering of coriander, mint, and thai basil, and a full seized serving of beef brisket, the whole liberally  sprinkled with nuoc cham (a Vietnamese dipping sauce). You could also chose from pulled pork, spicy tofu, or garlic chicken, which also looked good. The resulting dish was very tasty, if very messy to eat, with a sharp kick from the sauce, and a massive perfumed hit of herbs. They’re on my list to go back and try some of their other offerings now.

A further visit to Kerb and this time lunch was from Jamon Jamon, who produce two paellas each lunch time, the massive pans being stirred as you queue to order and scenting the air with saffron and tomato and garlic, and the smells of fresh fish. They’ve been doing this a long time, so it was no surprise to find how good the food looked. It was very hard to decide what I wanted, and so the stall-holder very agreeably provided a half portion of the seafood paella and a half of the paella Valenciana, with apparently chorizo and definitely chicken. The beans were a trifle unexpected but added a welcome touch of bite to the paella. It was very tasty, very comforting on what was quite a cold day. The only problem with eating it outside was that it didn’t retain its heat very well. I could have taken it back to the office and reheated it in the microwave though, so I’ve only myself to blame for eating it cold!

A recent wander out from the office saw me headed for Kerb again, but I was sidetracked by the sight of around two dozen stalls on the open area in front of the Guildhall. On stepping that way I discovered that what was happening was the (almost) monthly Lunch Market, which is apparently around the second or third week each month on a somewhat haphazard basis – the next ones are on Thursday 14 September, Thursday 12 October and Thursday 7 December 2017 so it’s hard to figure out the schedule apart from that it’s on a Thursday!

After a couple of circuits of the stalls trying to decide what I wanted between Japanese noodle dishes, confit duck burgers and almost everything in between, I finally decided that the African specialities from Urban Okra looked like a good choice. They were offering a selection of their excellent jollof, plantains, okra, and a goat curry. I snagged the goodies and scooted back to the office to enjoy my prize. Another delicious lunch was soon being demolished. The jollof packed a punch, and the goat curry was much better than the last one I had, the meat meltingly soft from long slow cooking, and with added mushrooms. The okra was fine – it’s not my favourite vegetable, given that it tends to the bland at best and slimy mush at worst. 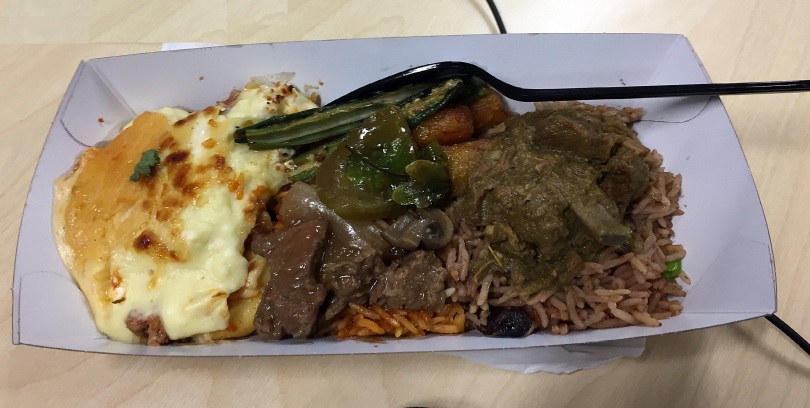 One final trip to talk about was a recent walk over to Borough Market. After the terrorist attack in the area the market was closed while the police operation went on. They re-opened on a Wednesday while I was working from home so I had to wiat till Thursday to head over there. I wanted to go as soon as possible because nothing sticks two fingers up to those who want to destroy your way of life than to go right back to doing whatever it was they tried to stop you doing, in this case enjoying Borough Market both as a lunch venue and as a shopping option. I went round the stalls, stopping off to buy some Comte cheese, and then stopped off at the German Deli, where I was able to buy two bundles of white asparagus, probably the last we’ll see this year. I also picked up my lunch from their stall on the street food row, a massive (and steaming hot) bratwurst, in a roll, with curry ketchup and a spoon or two of sauerkraut. Now there’s no way you can eat one of those in a dignified manner and sure enough I ended up coated in ketchup. It was worth it, though next time I’m avoiding the really hot curry ketchup, because it made my mouth burn in a rather alarming fashion. However, the sauerkraut cut through it, and it was a really good bratwurst!

It also gave me the excuse to go and have a goat’s milk ice cream, salted caramel in fact, from Greedy Goat. I’d tried a sample of the strawberry on the way into the market (anything but the licquorice!) and I had promised I’d come back. I even went to one of the cooking demonstrations, and then ended up with a small sample of brill in beurre blanc at the end of it. I left feeling that I’d made my own protest about what had happened, no matter how insignificant it might be in the overall scheme of things. 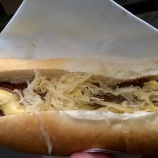 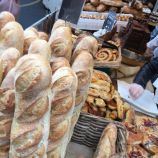 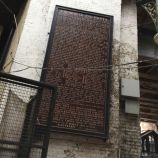 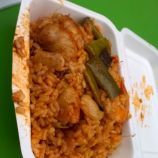