We’d been looking for somewhere good to eat that wasn’t going to be stupidly expensive (which ruled out almost everywhere up by Casino Square) and I’d settled instead on the Blue Bay, just along the coast road towards Menton, at the point almost of the border back to France. We decided a taxi would be a good idea and the hotel sorted one for us. We were soon at the entrance to the Monte-Carlo Bay Hotel and Resort (and 20 Euro lighter for the taxi fare – for 2 kilometres; it it had been better weather we’d likely have walked) and eventually found our way to the restaurant, tucked away at one end of the building, overlooking the bay.

The space is large, with an open kitchen at one end, and we appeared to be the first diners in. The staff were very attentive and soon established that while speaking French to me would be fine, it wasn’t going to help Lynne. From then on it was English all the way. We chose to start with a glass of Champagne while we navigated the menus, which were on iPads, which was again fine for me but not Lynne who is not just technologically averse, she seems to somehow make things stop working once they get in proximity to her. Anyway, we decided that we would opt for the six course Menu Escapades.

The chef, Marcel Ravin, is from Martinique originally, and is blending flavours from his home land with those of France, to great effect. Certainly Michelin think so (he has a Michelin star to prove it and they say “The modern and elegant setting of the Monte Carlo Bay Hotel and Resort also boasts a terrace with superb views over the sea. A superb and fitting backdrop for the food prepared by chef Marcel Ravin, whose intricate and flavourful dishes show signs of his Martinican heritage. An ode to culinary fusion!”) as do GaultMillau (14 points and “Located in one of the most prestigious hotels in the Principality, Marcel Ravin’s table combines the essentials of an experience that matches the surroundings and the clientele. Accompanied by a splendid view of the bay, the menu at €92 perfectly fulfills its mission, focussing as much on the produce, as on the invention and the technique: profiterole of foie gras and beetroot, souskaï de saint-jacques and giromonade (a Martinican pumpkin), mandarin wolf, vegetable arancini, supreme of guinea fowl, licorice coffee sauce, iodized celery, chestnut and mushrooms, shizo meringue, lemongrass/ginger. Very professional service.”).

Anyway, we sipped our Champagne and waited to see for ourselves. An intriguing amuses bouche soon arrived, looking like chocolates, but containing savoury ingredients. There was a celeriac mousse, a mushroom and truffle “chocolate”, and a Jerusalem artichoke mousse which proved yet again that in very capable hands there actually is a point to Jerusalem artichokes apart from for use as compost (or as a means of creating flatulence in humans)!

Next up was a lovely bread roll, all spiky, salted brioche, looking either very architectural or like a cute, golden brown hedgehog, as you prefer. You can think of it in any way you like. It was lovely, with that proper crisp brioche crust and a lovely, spongy interior. It came with a small portion of olive oil that was streets away from the stuff you often get in the UK, where there’s a nasty, bitter aftertaste that stays with you all night and overrides whatever else you eat.

We also encountered the “sensorial experience” which was pretty impressive. It was based on potato with a potato yogurt, a foam and a potato puff crisp on top. It was intriguing while not being overpowering, and the yogurt was thick and rich and dense and not at all what you might expect from a potato yogurt. 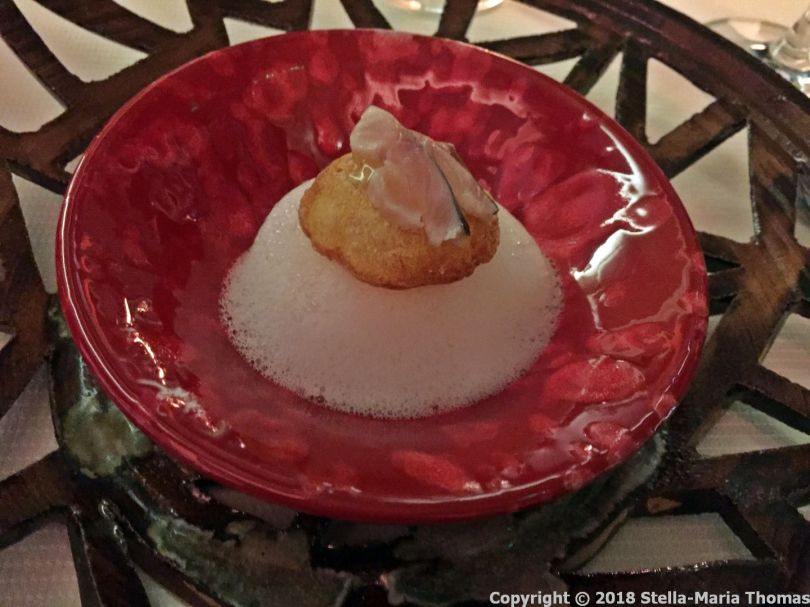 From then we were off and running into the main listed dishes, starting with the duck foie gras royale, laquered with sugar cane syrup. This was in some ways a less than complete description and the dish that landed in front of us was rich, sticky, unctuous and you felt the duck had met its end in a good cause. I know there are issues around the production of foie gras, but I also know that in France there are farmers who would not be able to make living without its production, so the jury in some ways is out. Regardless, it was delicious.

The next dish was clever in the extreme. It appears to be something of a signature dish and is green papaya spaghetti, flavoured with black truffle and a carbonara sauce. It was unexpectedly creamy, with a dense texture more like a noodle than most pastas, and with lots of rich flavours going on. The bacon/creamy/Parmesan of the carbonara was a thing of wonder.

From here we moved on to the two meat options. We’d gone for one each in our usual way so we could share and thus get to taste more than one spectacular dish. I ordered the saddle of lamb with a spicy lamb sausage (seemingly the chef’s take on a merguez and very goof indeed) and green vegetables. 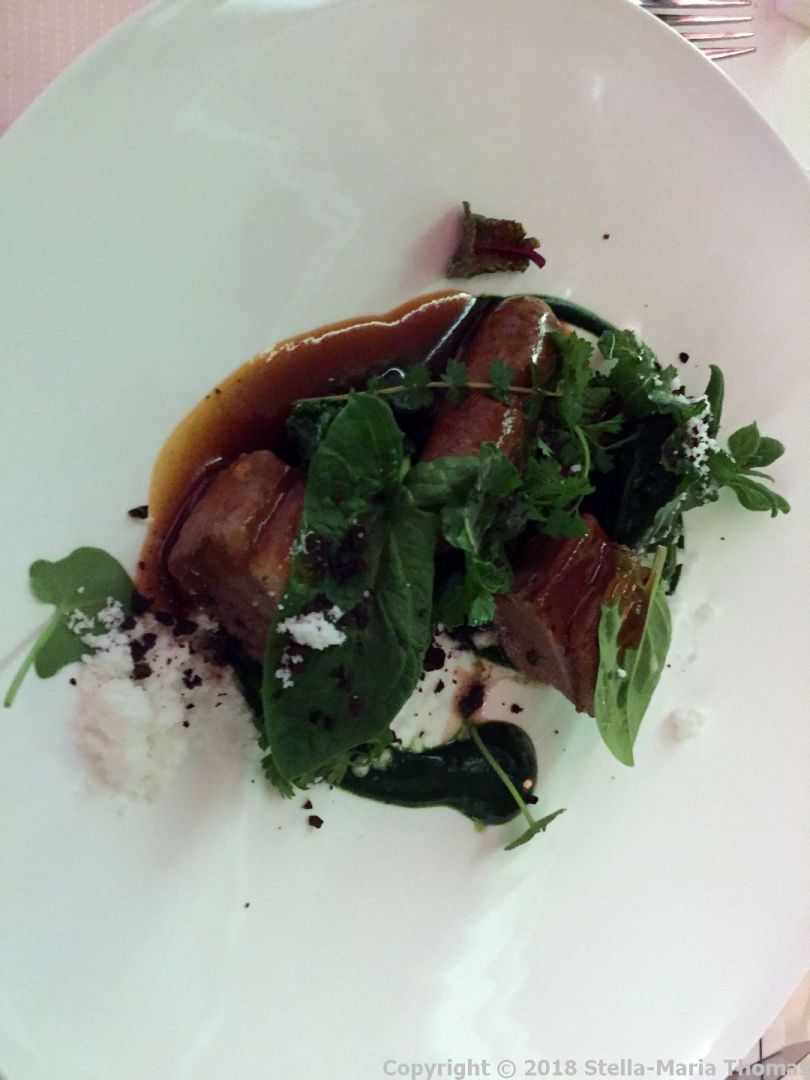 It was accompanied by a lovely soft concoction of polenta made very soft and creamy by the addition of huge amounts of sheep’s cheese and a lovely gravy filled with chunks of lamb that would have stood up on its own without the main dish. In fact on a cold Winter day I would have happily scarfed a bowlful of that. 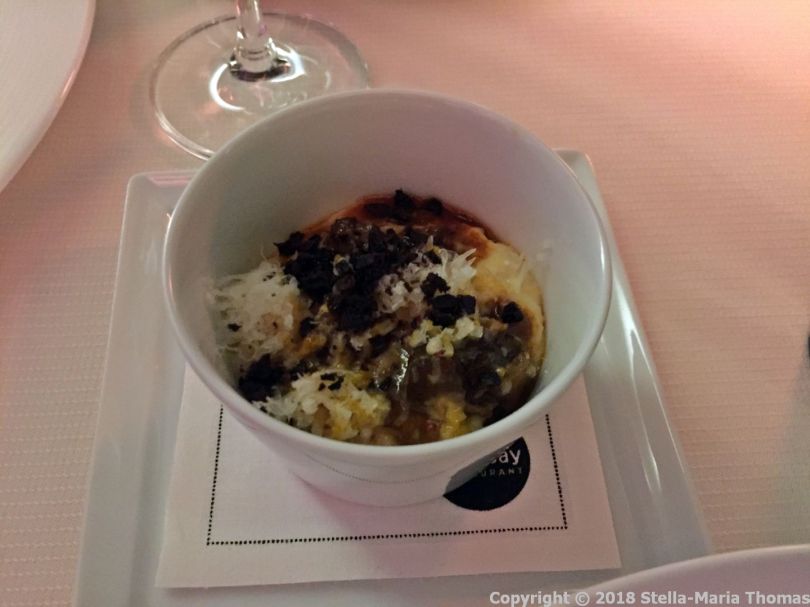 Lynne had gone for the duckling in a sweet and sour sauce shot through with honey for more sweetness and a lively dash of Timut pepper, all served with sweet potatoes, mangoes and charred leeks. Both dishes were lovely, the meat cooked to perfection, and with some lovely warm notes that would not normally be found in straightforward French cooking. I’m assuming these were some of the Martinican flavours working their way in and lifting the food to a higher level.

We did the same with the desserts, ordering one each so we could share. First, however, there was the pre-dessert of coconut and lemongrass, which was flavoured with oxalis flowers. It was light and refreshing and just what we needed by then as we were starting to feel rather full. There was crunch and citrus and you could feel your palate clear as the various elements slid down your throat. 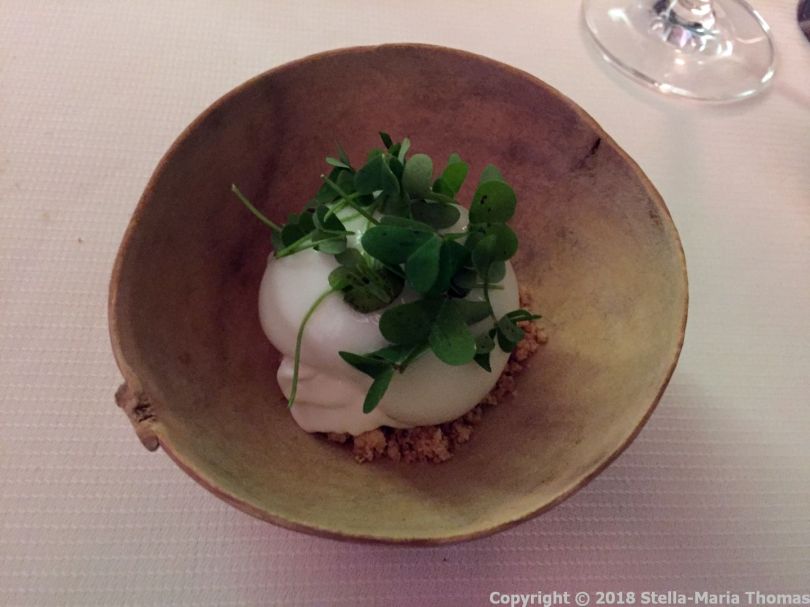 And then the desserts. The descriptions were simple, but the execution was not, having layers of complication that mingled to give the perfect dining experience. The “marvellous citrus and ginger” had lovely hits of warmth from the ginger, but was prevented from being cloying by the citrus that offset the warmer flavours. It was lovely and fresh and pretty without being too much.

The real piece de resistance was the souffle though. A gingerbread souffle was as near to perfect as I can imagine, coming away from the sides of the mould as cleanly as you could want. The Caribbean rum ice cream with it packed a powerful punch and the whole was a brilliant end to a very good meal. 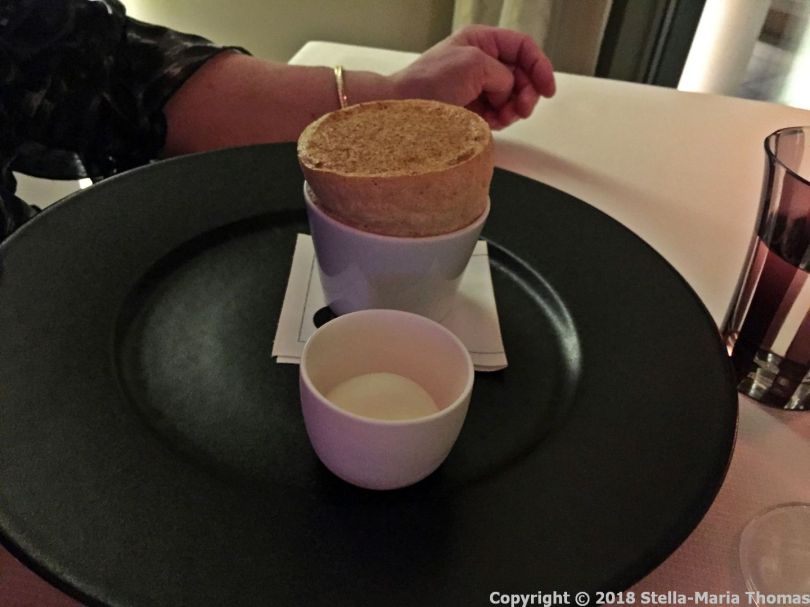 We were now at the coffee and tisanes stage of the evening, and so we eventually paid up, staggered out to the entrance, and got the staff there to find us a taxi (which oddly cost 5 less to go back at almost midnight). We left with a little box each containing an small orange sponge cake that kept very well and still tasted remarkably good three days later, despite having gone a little biscuity by then. 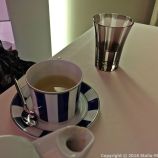 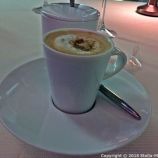 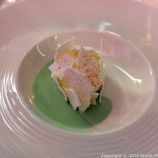 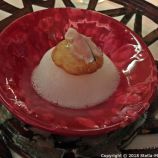 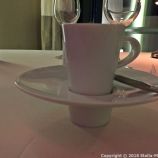