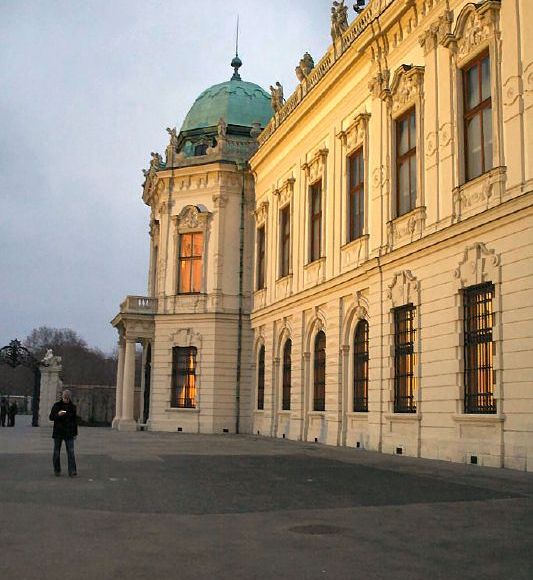 To an extent this was a post for a very specific person back in 2005, but it was also a very useful exercise for me as a planning post – I’ve rechecked all the links and they are fully up to date so when next I visit it will all be handy. And maybe I can persuade other people that Vienna is a truly wonderful city and should be visited. You’ll probably find yourself looking upwards a lot, by the way, because the outsides of many buildings have all sorts of wonderful decorations.Vienna and what you should do if you go there: First off, if you’re going in February or March you will need warm clothes for when you’re out and about. The buses, trams, trains and underground are plenty warm enough, but the time spent outside of them can be painfully cold on occasions, especially if you get a crisp, clear-skied day.

My suggestions for what to do start with going to the nearest underground or tram stop and getting a multi-day ticket for however long you’re staying. If you’re used to London prices, you’ll find these ridiculously cheap. Now go out and get your bearings. To do this, start the day by getting on a number 1 or 2 tram. One of them goes clockwise and the other goes anti-clockwise round and round the Ringstrasse, past many of Vienna’s historic buildings. If you have the Michelin Green Guide to Vienna, it lists the buildings for you. After you’ve done that, you should at least have an idea where the Opera house, the Kunsthistoriches Museum, its counterpart the Naturhistorisches Museum, the Volkstheater, the parliament building, and the Hofburg are.

Now get off the tram and start walking! And I would start with the Karlskirche, which is fabulous. Once you get through in there it will probably be time for lunch. This allows you to visit my favourite market anywhere, the Naschmarkt, a remarkably wonderful food market (with a flea-market at the far end at weekends), with lots of stalls selling produce from all over what used to be the Hapsburg Empire, and with a number of cafes/restaurants, many of which make an ideal lunch stop (or if you fancy creating your own picnic, shop for goodies at the market or go back to the Ringstrasse and pop into Julius Meinl to buy your own ingredients). My favourite stop near the Naschmarkt, however, is Wein & Co, a wine bar on the edge of the market, near the Secession, that will let you try glasses of the many wines they sell separately, and which also does remarkable – and remarkably large – plates of food (the Spanish meat and cheese selection is particularly good both in terms of quantity and – more importantly – quality). Afterwards, drop into the Secession building, known to the locals as the Golden Cabbage, and take a look at Klimt’s Beethoven frieze.

Afterwards, hop back on the underground or the tram (or walk) to the centre of town and nose around the Hofburg. The best part of it is the Kaiserliche Schatzkammer with its glorious Burgundian and Holy Roman Empire treasures, as well as the bizarre reliquaries (don’t miss the dancing skeletons on a reliquary of one of the Emperors). You can also go to the Stephansdom, and then maybe take a horse drawn carriage ride if you’re feeling really touristy.

You should probably try and see the Brueghels in the Kunsthistorisches Museum, or the Durers in the Albertina. Or you might take a tour of the Opera House, and marvel at the enormity of the backstage area. If you want something a bit different, pay a visit to the Imperial Furniture Depository, an eclectic collection of all sorts of furniture that won’t fit in the Hofburg. The only problem is that the woodwork is all very tactile, and they don’t fence it off; however, if you touch the alarms all go off! You should, as Pev mentioned, go and take a look at the Hundertwasser House too, and also – if you’ve time – the heating plant. I’d also recommend the Belvedere, which has some good paintings, but more interestingly a series of beautifully grotesque sculptures, as well as some spectacular medieval altarpieces. If the weather is good, a trip to the Prater is essential, and you can take the twenty minute ride on the Riesenrad and pretend to be Orson Welles in The Third Man! Equally, go to Schonbrunn Palace and after you’ve looked round inside, take a walk in the park.

If you want to go to the opera, tickets are available via the websites of both the Staatsoper and the Volksoper. Sales start one calendar month before each performance date, and the prices are very reasonable. The Volksoper is cheaper, and concentrates more on operetta, and light opera. However, many of the singers start out here and then move on to the Staatsoper. On the other hand, avoid the Spanish Riding School unless you can get seats. The standing tickets don’t give you enough of a view to be worth what you’d pay for them. Go to one of their rehearsal sessions instead.

If you are able to stay longer than a couple of days, and you’re there in April, go out to the Wachau valley for a couple of days, marvel at the flowers on the apricot trees and all the other flowering fruit trees, and make sure you visit Melk Abbey.

For coffee one of my favourite cafes was always the Cafe Landtmann, next to the Burgtheater, though needless to say there are plenty of cafes in Vienna all offering you the chance to fill up on coffee loaded with cream, cakes, hot chocolate, and the like, and the chance to take as long as you want over it. In the evening, a couple of places spring to mind. For traditional Austrian fare, done very well, make your way to the Gasthaus Witwe Bolte and try the food there, without having an unwanted (and unwarrantedly large) schnitzel forced on you. On the other hand, for vegetarian food done well, try Wrenkh.

In closing here are a couple of useful websites: