In London for a couple of exhibitions, we decided that we should stop off for an Easter Sunday lunch somewhere close to the Design Museum where we had tickets for Ferrari: Under the Skin in the afternoon.

The morning saw us at the National Gallery, viewing Reflections: Van Eyck and the Pre-Raphaelites which is now finished, sadly. More elsewhere on that though, as well as on the Ferrari exhibition.

Presented with a list of restaurants in reasonable proximity to the Design Museum, Lynne chose Launceston Place.  It was an excellent choice. The building consists of a series of smallish rooms, curving around the end of the eponymous place, and we were soon seated at a table giving us a good view of the restaurant and the smooth running of the front of house, always a pleasure to watch.

A glass of rose Champagne (Besserat de Bellefon, Rosé, Cuvée des Moines, Brut) was a lovely way to start (and also suggested a markup of around 300% on the wine list, but that’s the way of high end London Restaurants I’m afraid). Anyway, settled in we studied the menus – decorated with very modern icons to represent each course) and decided that the tasting menu which this month concentrates on beef would be the way to go. It was sold to us as “our take on Sunday lunch” and there were elements that did indeed back up the claim. What followed was technically brilliant but also joyfully playful and we thoroughly enjoyed every mouthful of it.

First up were some amuse bouches, including a little cracker with a savoury topping despite involving banana. And you could really taste the banana and sense its texture but it was not at all sweet. 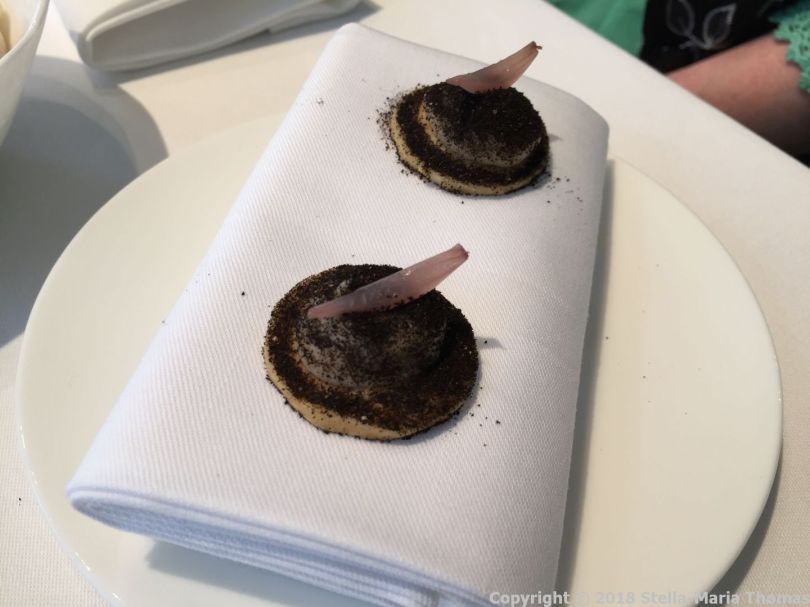 There were also two teeny ravioli filled with smoked haddock. They were crispy on the outside and the filling was a thick soupy liquid, and again perfectly executed.

And then the final amuse, and this just made me smile at both the flavours and the presentation. It was a fennel and sea salted candyfloss, which we tore apart and then discovered it provided a sweet/salty hit and collapsed down into a lovely, chewy sweet almost toffee like substance. Very clever! And also fun. 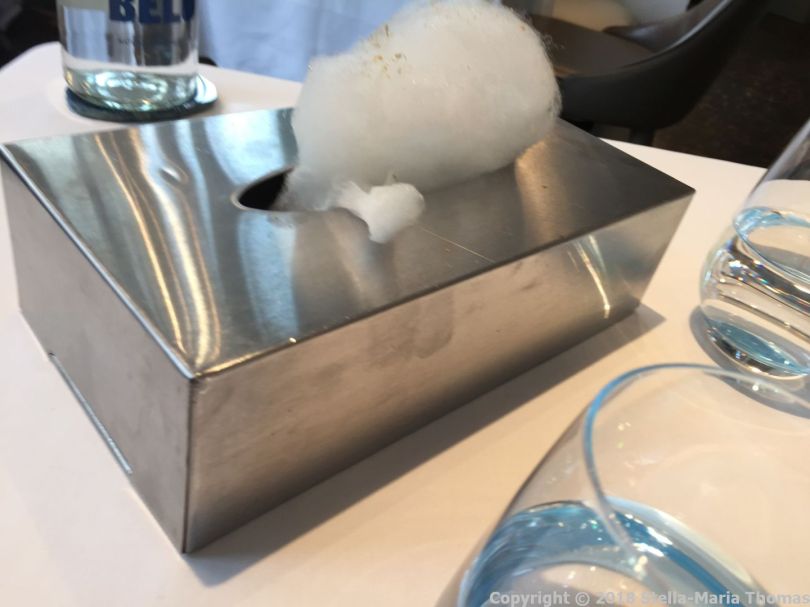 And then there was the “bread course”, a thyme-infused roll of beautiful softness and crumb, served with a seaweed butter and a yogurt butter and a separate tiny bowl of potatoes! There was a gel at the bottom of the bowl, tiny chunks of softly cooked potato, and a creamy top layer with little crunchy crispy bits scattered across the top. That’s the second time this year we’ve encountered someone doing something very different with potatoes, the first being the potato yogurt at Le Mirazur.

Finally, we were at the start of the tasting menu, with beef tartar wrapped in brik pastry, with button mushrooms and a kombucha mayonnaise that was rich but not over-powering. Tiny, pretty, exquisitely presented and with the beef chopped to just the right size and consistency, this was a stunner of an opener. With it we drank (having opted for the matched wines) a Burgundy that, while not particularly sophisticated or complex, went very well with the dish. I would not, of course, have expected anything else. I didn’t make a note at the time but I think it might have been the 2014 Domaine Jean Guiton.

The next dish was a consomme, which is rather too simple a description frankly. It was poured at the table over a couple of tiny nasturtium leaves, a sliver of burnt onion, and a tiny pasta parcel, the pasta almost translucent, filled with slow-cooked oxtail that was so soft and so tender I’d have happily paid a lot of money for a full bowl of it, preferably with some of that bread! It came with a Tuscan red, which again I failed to note the name of.

Next came the main event, a brilliantly executed piece of fillet of beef, pink in the middle with a glorious caramelised crust, a small portion of potato puree, some fabulous squid ink jus, and a small amount of spinach. It was incredibly good, and went well with the latest of the wines, a Spanish red of depth, complexity and an amazingly purple hue. 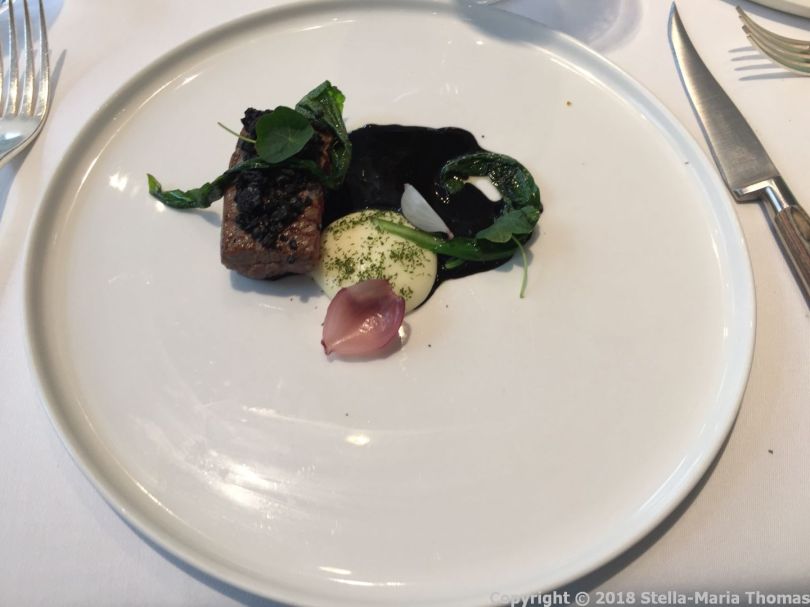 The fillet was served with what can only be the most perfect chip in existence! When asked, I was told that the potato is thinly sliced part of the way down, and then roasted coated in butter. It was crispy, buttery, golden and with a soft fluffy centre, scattered with sea salt crystals and from now on will be the standard by which I will judge ALL roast potatoes/chips. A bucketful please, now! 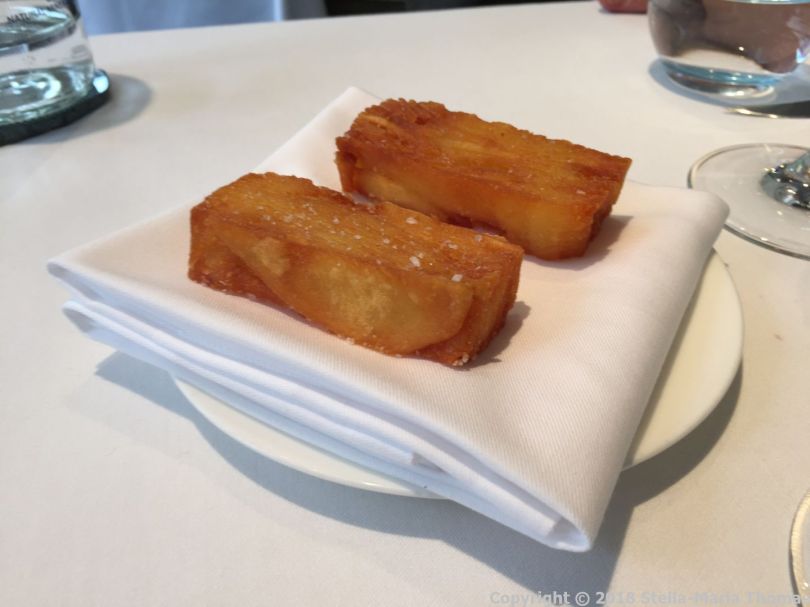 We were then tempted into a second glass of the Spanish wine, and a shared portion of cheese. We left it to the waiter to provide a suitable selection from the cheese trolley (which had a lot to answer for, it having been left in full view of us for a large part of our time in the place – a dirty trick, but an effective one).

And here’s what we got (bar the piece we’d already eaten). An excellent selection, well chosen.

It was now time for the first of two desserts, this one a mango and violet confection, spritzed with violet scent as it arrived at the table. It was just like a Parma violet would like to be but isn’t, without the artificial aftertaste of those not at all loved childhood sweets. This was really lovely, the mango perfectly ripe and full of flavour, the violet subtle on the palate. It was served with something we have not encountered before, a Basque country wine, which I suppose you could claim is Spanish (though I might think twice myself), an Arima, Vendimia Tardia, Gorka Izagirre, Basque Country.

And then all that remained was the dessert “proper”, described quite starkly as white chocolate, rhubarb, coconut and basil. Theoretically Lynne does not like rhubarb, but she loved this, and I don’t love coconut (at least not when it’s dessicated, which this appeared to be, but was presumably prepared in house rather than coming out of a pack) but I also loved it. It was just right, and just the right size.

In conclusion there’s a very capable hand on the tiller here. Sadly at the prices we may have to think twice before going back, but it was well worth the considerable cost of lunch to experience the skill and taste on display.