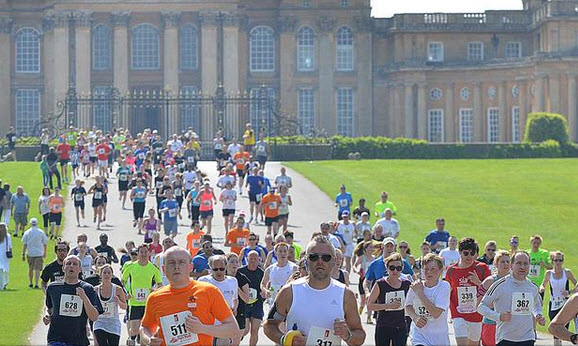 Having not run any sort of race since the Silverstone 10K two years ago, the Blenheim 7K seemed like a conveniently sensible distance in a conveniently close location, it being only 40 minutes or so away by road. So I figured what the hell, I’d go for it. It was relatively inexpensive too so that helped the decision along. Certainly my training has been going smoothly enough that I felt I’d be able to get round without too much of a struggle. I signed up, completed my training plan on schedule, and so set off for Oxfordshire on Sunday morning hoping that I’d done enough and that the hills in those parts would not be too much of a problem.

I go there far too early and as it was freezing cold, wandered down to the cafe in the palace shop area and sat down with a cappuccino to while away some time and to fill in the details on the back of my race number. I returned to the car and ate a banana, and then set off to try and find the start. Given the standard of signage from the main car park, it was just as well the 1 mile under-15s race was underway because I just headed in the opposite direction to the oncoming horde of children and thus located the start. And that’s where the trouble started. Some genius, in the face of around 2000 runners and their supporters/friends/families decide that they only needed 12 portaloos! Now if you’re a runner, or you know runners, you’ll know that before a race they all want to use the toilets. I joined the queue at 10:24 and finally made it through a cubicle door at 11:01, 1 minute after the race was supposed to start. I wasn’t impressed and nor were the other people in the queue.

Apparently, the announcer, who could be heard intermittently from where we were queuing, but not understood, did announce that there were toilets in the gardens behind us, but as we couldn’t make out a single word of the announcement, that really wasn’t helpful. Somewhat relieved, I headed to the end of one of two queues waiting for the start and eventually crossed the start line at 11:08, which was somewhat later than expected.

We followed the same path towards the palace that the youngsters had run, and I spent the greater part of that stretch, and the bridge over the lake, passing people who were considerably slower than me, including women walking three abreast so no one could get past them without a fight. And I was still passing people as we headed off into the countryside on a trail that dipped down towards the water and then climbed again, but not before we’d encountered a bottle neck caused by people not wanting to go through the muddy puddle at the bottom of the dip. It was too steep to get round the people trying to carefully tip toe round it so I’m afraid I charged straight through the middle of them and the puddle with a cry of “It’s just a bit of mud”. Heaven help any of the wussy puddle-avoiders if they ever come to Daventry parkrun is all I can say! I was merrily passing people even at that point mainly because they seemed arrived of getting their shoes dirty.

From there it was slightly plainer sailing, though the “Beware pheasants” sign was slightly worrying. What were they going to do? Peck our ankles? Flap at us? In fact I didn’t see a single one, though I did see a ginger cat perched on a pile of logs that simply sat and stared at us all as we went past. It had a look that said, plain as day, “What the hell are the crazy humans doing now? And why?” He never got an answer from anyone as far as I could see.

As to the run itself, I had hoped for better overall pace but given that until about three weeks ago I was struggling to get under 12 minutes a mile (7.27 a kilometer), and taking into account the hilliness of a couple of sections of the course, I’ll take the average I could get! I will not, however, be taking the average as given in the results as they are insisting it was a 7k when their own paperwork said the course was “slightly over 7k”. According to my Garmin it was 7.59k which seems like a lot more than “slightly” to me even allowing for the usual Garmin margin of error (Strava says 7.5K). Here are the stats.

The uphill bits (especially the all uphill bit) took its toll somewhat, and I did end up walking, though to be fair I am capable of quite a fast walk and was actually passing some people who were trying to run up the 5th split with its elevation gain of 102 metres. The downhill slope was lovely, and as a heavier runner I enjoyed the extra assistance of gravity, though it was still not my fastest split, suggesting I really did go off too fast at the start. The lack of a water station until somewhere in the 5th kilometre was not especially helpful, nor was the shortage of volunteers handing out bottles so I ended up not getting a drink. To be fair I was going to throw most of it over my head to cool myself down a bit, which might have been unwise in temperatures of between 5°C and 6°C (41°F and 42.8°F), but even so I’d have welcomed a mouthful of water at that point. 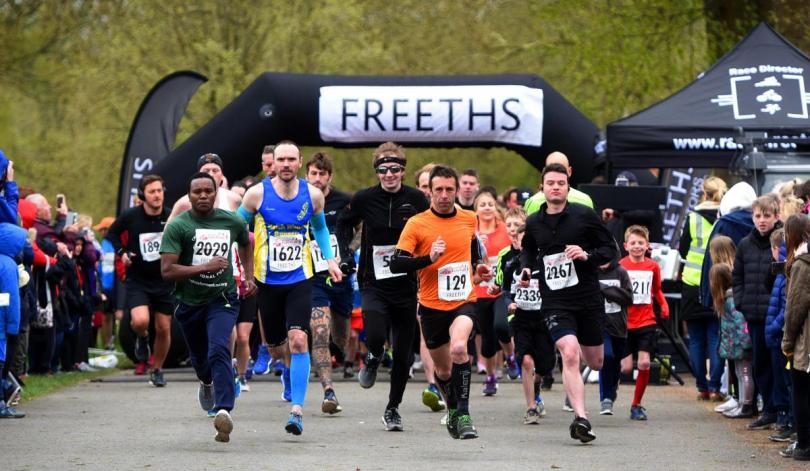 The finish was a nasty slog into the wind, and the realisation that I was still running some time after passing the 7k marker and after the 7k alert from my Garmin was very unwelcome. The cheering supporters on the finish line stretch were very welcome though, and helped me put in a sprint for the line. And then it was another somewhat inefficiently organised water station, and a medal, before I walked back to the car, and promptly spent 50 minutes just trying to get out of the car park, some 25 of those minutes not moving at all, while my muscles tensed up and I tried to get warm again.

The course itself was very attractive, but the disorganisation was seriously off-putting and after talking to a friend who ran the Blenheim 10k last year it seems that that was similarly chaotic. So all in all I wouldn’t recommend it and I certainly won’t be doing it again.