With the sun still baking down and the UK in the middle of a heat wave the likes of which we haven’t experienced since sometime in the 1970s, it really wasn’t running weather (at least not for me – I’m a cold weather runner) but I’d signed up to run, and so didn’t feel I could back down, not with the company picking up our entry fees and providing t-shirts for all. 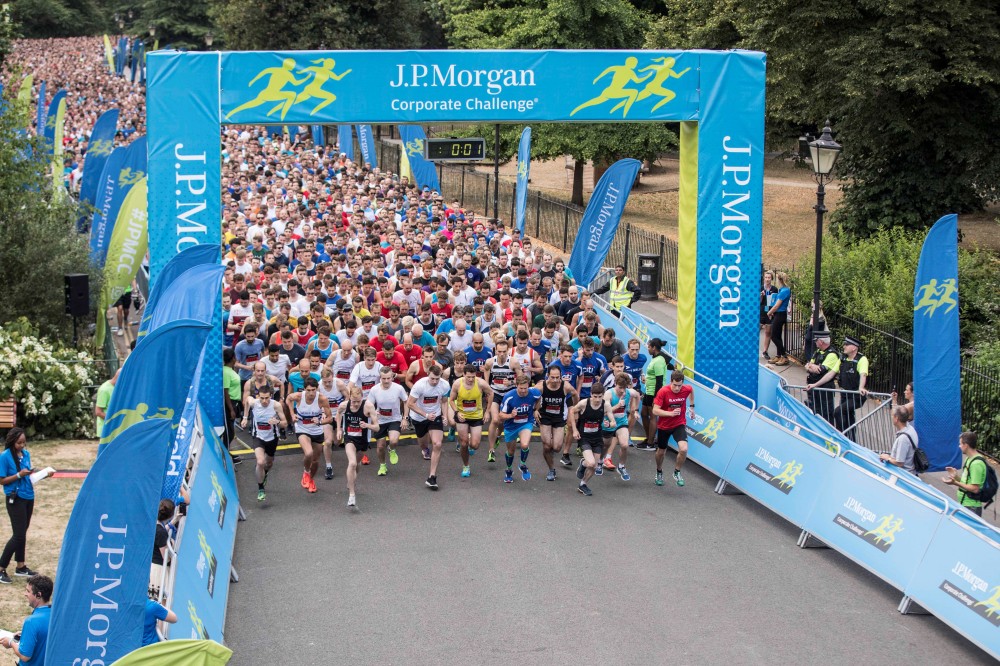 The first race was run on July 13th, 1977 in Central Park, when a total of 200 runners from 50 companies entered an event called the Manufacturers Hanover Corporate Challenge, a predecessor firm of J P Morgan.

The first race was inspired by the company’s sponsorship of the New York City Marathon, and was set up to be an event solely for corporate runners, and over a distance which would mean most people had tome to train for it. And so 15 of my colleagues and I found ourselves signed up for the 2018 London event (it takes place in 12 other cities worldwide). 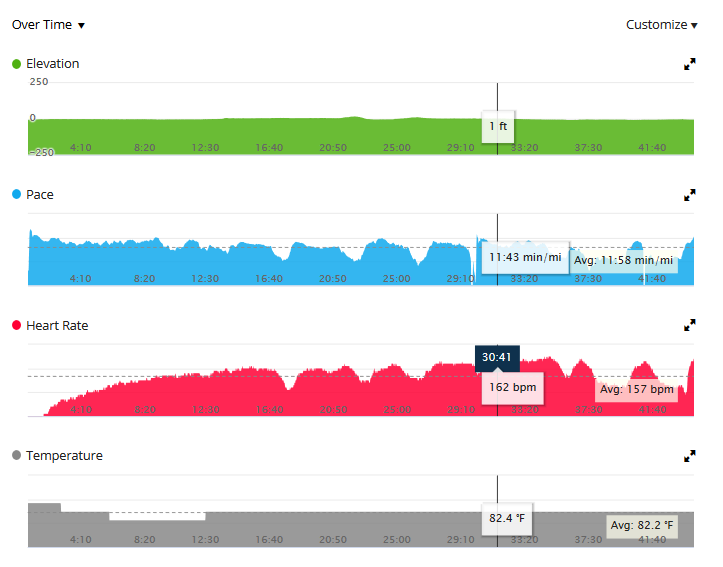 We set off in what should have been plenty of time to catch the river bus from Saint Paul’s to Battersea Park, a distance of around five miles, only to find it was too full and would not be stopping. We considered waiting for the next one but with around 15,000 runners expected, there was a good chance the same thing would happen again. We decided to walk, not fully aware of the distance at that point. We made it to the park with around 15 minutes to spare, slightly less hydrated than I would have preferred, and the had to line up in our start areas. 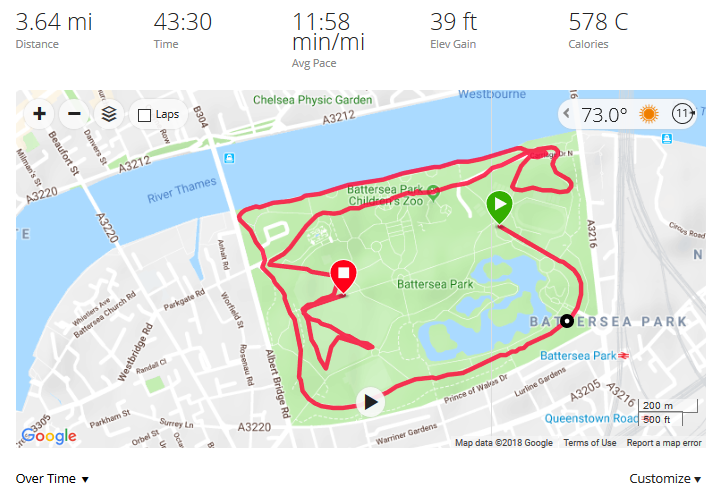 As one of the older, slower runners I was in the white pen at the back, which meant that in effect I couldn’t even see the start line from where I was. It was hot out there, 86°F (30°C) at that stage of the evening, which is not the optimum temperature to attempt anything more strenuous than lying in a heap in a darkened room, and the air felt very humid and close, as if a thunderstorm was lurking somewhere just over the horizon.

The starting klaxon was heard and we all shuffled forward about 6 inches and then stopped. Over the next 28 minutes we would repeat the shuffle, stop, shuffle, stop process repeatedly before finally seeing the start line arch some time after the fastest runners had already finished, and cranking up to get moving. By then I was already feeling pretty knackered, but I started my Garmin and set off, already looking forward to the water station “after the 3k marker”! 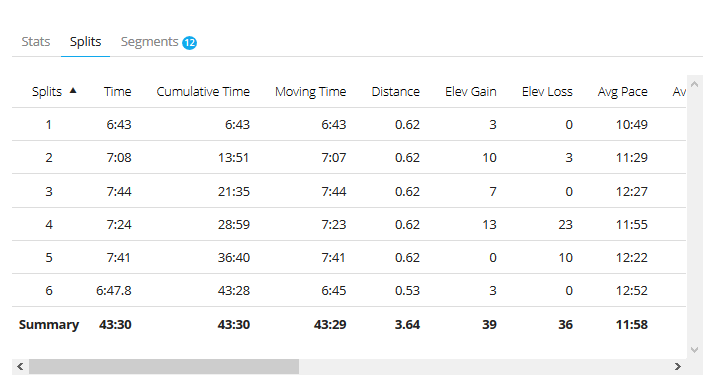 The first couple of kilometres felt OK apart from the heat, largely because we were running under the cover of a lot of the splendidly shady mature trees that grow in the park. However, it got hard after that and I found myself walking a short part where the course went uphill (only slightly but it was enough in that heat). As I passed the 3k mark I was hoping for water and soon. It didn’t come, and so I trudged on, hot and bothered and unhappy, and eventually found the water station just before the 4k marker. I had to persuade them to pour me a second cup after I’d poured the first one over my head. I managed to run the next kilometre at a reasonable pace, and the last full one very slowly. The last 600 metres seemed to go on forever, but I did at least manage a sprint over the finish line, which was back on the tree-lined section.

Utterly spent by now, I collected two bottles of water, a banana, and a t-shirt that’s not quite big enough, before wandering slowly but determinedly towards the park exit. I was just pondering how I was going to get back to the office to collect my bags, when I spotted a taxi in the distance with its “For Hire” sign illuminated. I’d got my work building pass and my bank card in my pocket, along with my Oyster card in case I did need to take to public transport, but this was too timely to pass up. 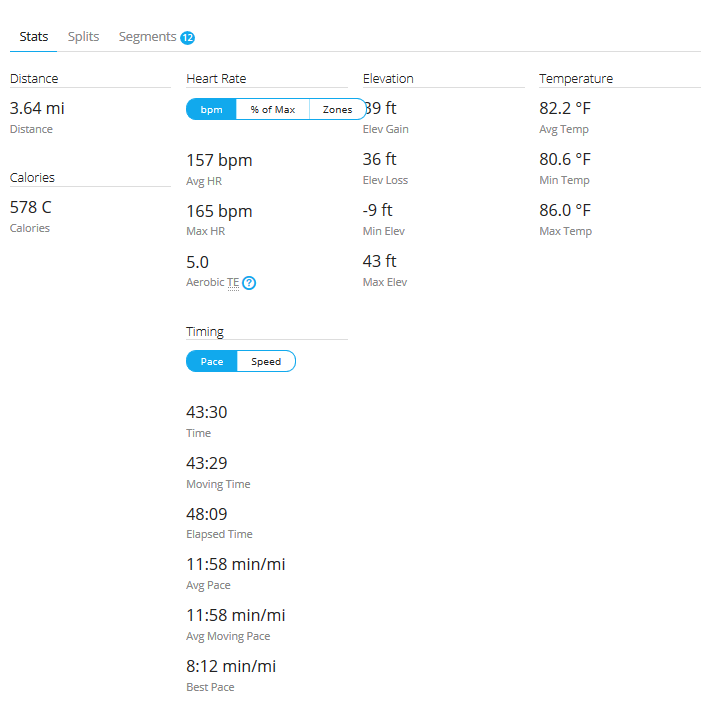 The lovely cab driver cranked the aircon up while I sat in the back and downed both bottles of water, and then scarfed the banana. He drove me to the office and waited while I grabbed my bag, then took me to the station where I was able to catch one of the few trains that seemed to be running on time. It was a fast train, and I upgraded to first class so I could sit in comfort.

After the second part of the race was run, the results show that I finished 22,184th overall, out of 24,191 runners! I was 6,770th woman home, in a time of 43:27, which was just 3 seconds less than I’d clocked it at. I took a certain amount of pleasure in knowing that I’d beaten two of my much younger colleagues to the finish line too! 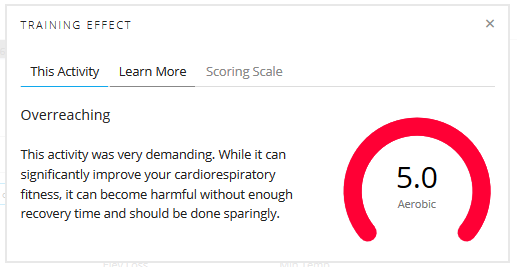 It’s fair to say my Garmin stats were a bit odd because of the heat, and I sense some disapproval for the whole effort. I certainly don’t intend running again for a few days at least.