Word of Europe’s first pop-up Shakespearean theatre, the Rose, had been circulating round last year and when the tickets went on sale, and we realised that one of the plays on offer was Richard III, we knew we had to get tickets. We’ve been to the Globe in London, so we knew we didn’t want to be groundlings. That’s no fun at all, especially if the weather is against you. As it turned out, on the day we didn’t have to worry about getting soaked to the skin, but if we’d gone for the £12.50 tickets, we would likely have roasted alive instead. It wasn’t exactly the best weather to be standing out in, especially with what was originally scheduled to be just shy of 4 hours of performance, with just one interval! 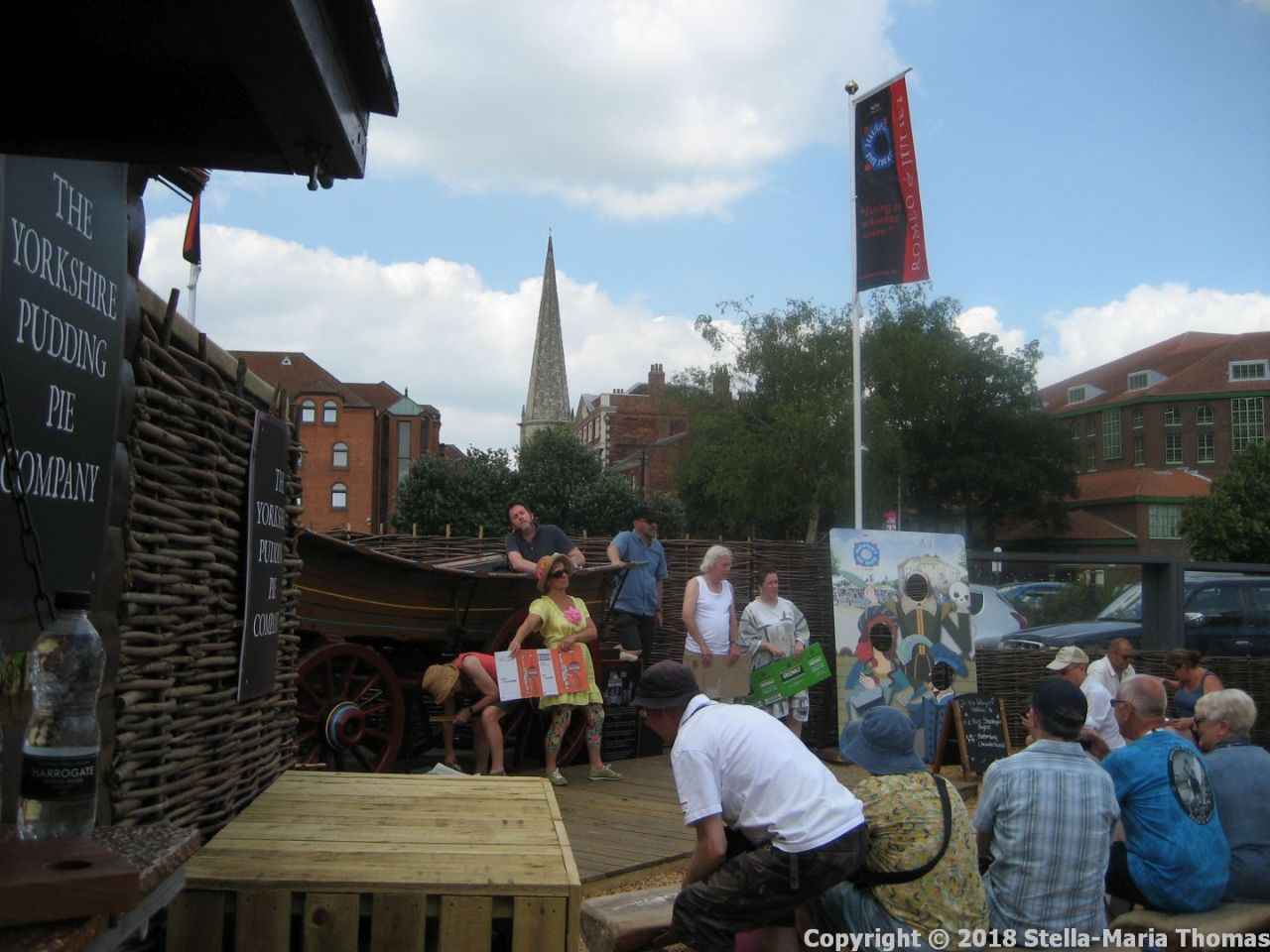 The whole project seems wonderfully insane, with an “Elizabethan village” outside the theatre building, offering food, drink and entertainment, including a bunch of actors performing from the back of a cart, and a carved wooden bear in place of a real one. Once inside the theatre, it’s a very find structure, with excellent sight lines from the various levels. I was pleased, on speaking to one of the volunteers, to hear that there is talk of trying to make this a regular Shakespearean festival, and I do hope that can happen. I’d be happy to head up to York on a regular basis for it.

Anyway, once inside it was all about the performance. We start with the York faction merrily celebrating, in this instance by dancing wildly to “Come on Eileen!” which got a laugh, and then we were straight into our introduction to the heroic villain of the piece, Richard, Duke of Gloucester, brooding furiously on a balcony.

Richard was played with a great deal of energy, and the odd slip into his presumably original Welsh accent that might have been better suited to Richmond (Henry Tudor), by Dyfan Dwyfor, about whom I knew very little. though I must have seen him both in “Hinterland” and “A Very English Scandal”. I was impressed by his performance, and he’s certainly up there among some of the best Richards I’ve seen (though no one gets close to Anthony Sher’s crutch wielding version at the RSC over three decades ago now). He’s definitely up there with Andrew Jarvis for the late and seriously lamented English Shakespeare Company, and Ralph Fiennes at the Almeida a couple of years back for sheer menace and for making even the comedy of the play seem dangerously sharp-edged.

With a fairly small cast, and everyone appearing in two out of the four plays being produced this season (“Macbeth”, “A Midsummer Night’s Dream” and “Romeo and Juliet” being the other three), there was a great deal of doubling up even within the one play. It led to some interesting decisions, including a sex change for the Duke of Buckingham, which did lead to some textual changes, mostly in terms of how the character was addressed by other characters. Shanaya Rafaat was an excellent foil, playing the part as a politician, weighing up each move as to how it would benefit her, and finally baulking as she is asked to take a step that is too much even for her.

The women in particular were very good, with an absolutely superb Margaret from Julie Legrand. It’s a part that can lead to overacting (something you could be fined for in the time of the medieval guilds and the Mystery Plays – I have been known to suggest the reintroduction of some sort of penalty now). Here, it was not a problem. She managed to convey Margaret’s incandescent fury, as well as her grief, without descending into frothing incomprehensiblity, and was especially chilling when teaching the others how to curse.

Emily Raymond as Queen Elizabeth provided sound support, as did Alexandra Dowling as the Lady Anne, managing to make Anne’s volte face when “wooed” by Richard almost believable, not something that is easy to achieve. 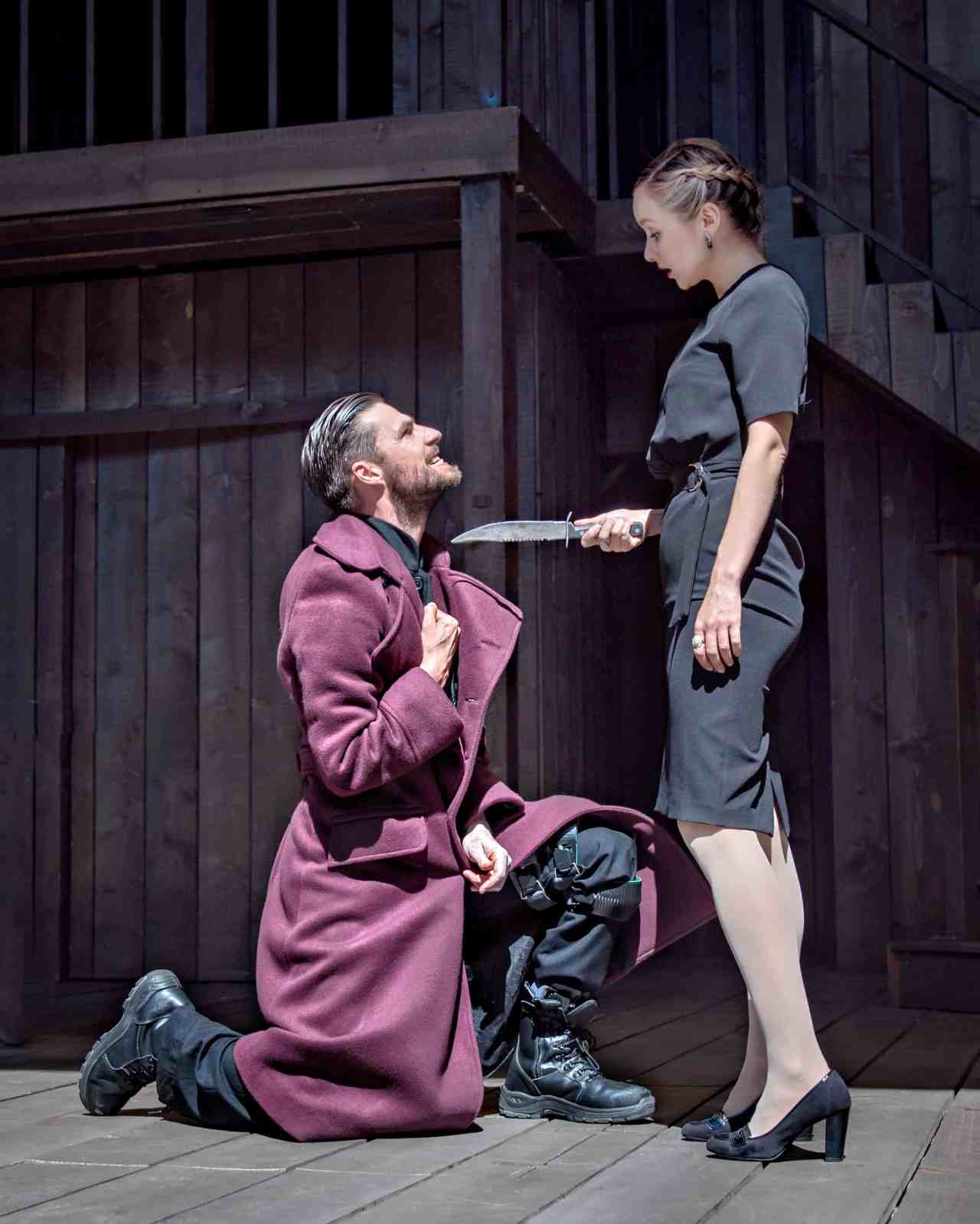 Completing the trio of furious women, we had Julia Swift as Cicely, the Duchess of York, played again with controlled fury initially, but then with increasing despair. The scenes with the three of them together were superbly done.

The Bishop of Ely was also a case of gender blind casting, and was played with aplomb (and understandable confusion over strawberries) by Emma Darlow, who also played Cardinal Bourchier, Dorset, Blunt, a citizen in the scene where Richard is “persuaded” to accept the crown, and a messenger. This gives you some idea of the amount of doubling up that had to go on (even Julie Legrand had to do her bit by playing another of the citizens), and also explained the use of coats, many different coats, to indicate which character someone was at the time. It was very cleverly done, and I’m sure it seemed like a good idea when they designed the production back in the spring. In an unexpected heatwave, as the sun crept over the edge of the oval and illuminated the stage, it must have been sheer torture for the cast. 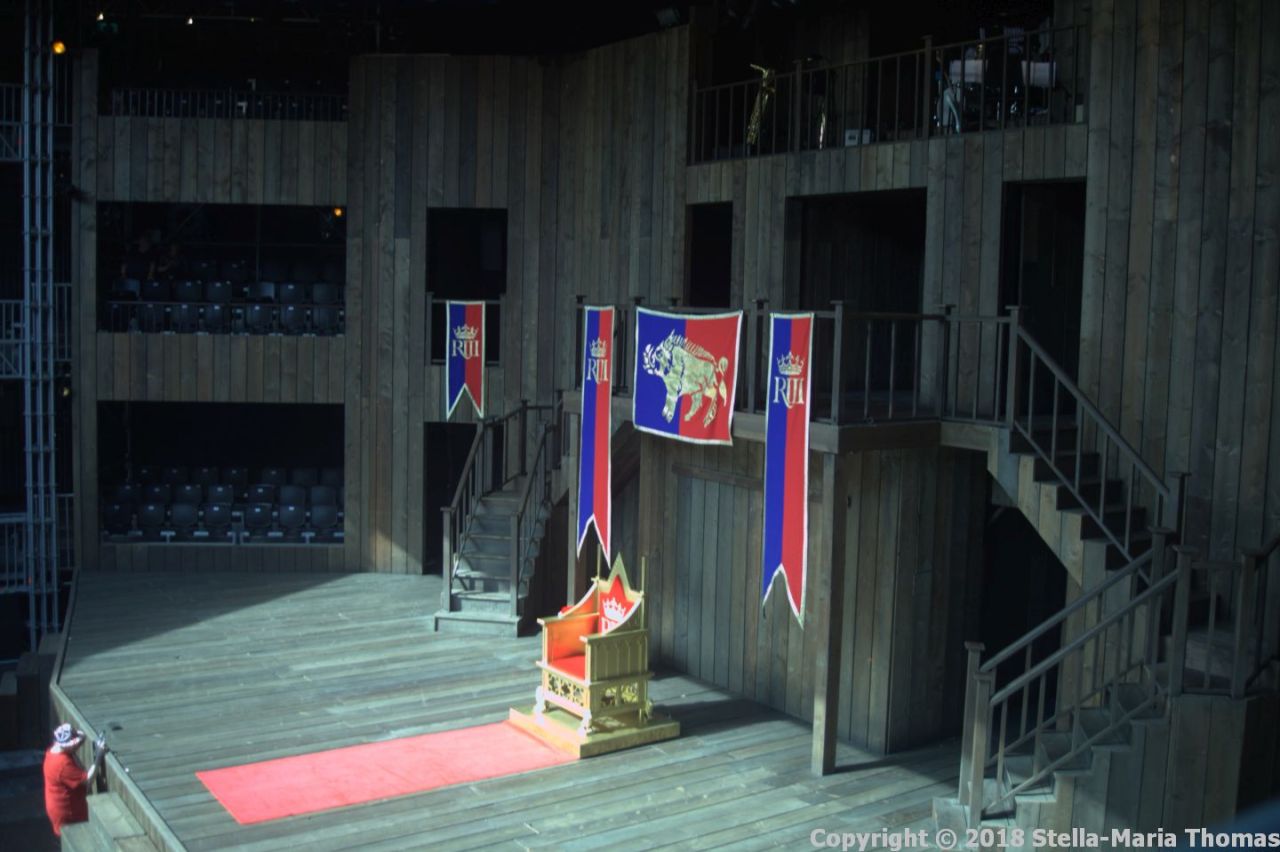 The staging was minimal, and made excellent use of the various entrances and exits, as well as of a trapdoor mid-stage, into which Richard is dumped at the end, and with various executed rivals making their exit that way during the course of the play. The only heavy use of props was the coronation scene, which starts the action again after the interval. The modern dress theme also continued throughout, with uniforms and guns, and in this instance lots of heavy cloaks. The women also wore furs during the scene where Elizabeth flees to sanctuary. It cannot have been comfortable, but they all seemed to bear up reasonably well, though Anne’s faint during the coronation scene may not have been entirely faked.

By now most of the groundlings were plastered against the back of their area, trying to keep out of the sun (all apart from one individual who stood leaning on the edge of the stage throughout), and most of the proscenium was also in full sunlight. If it affected the performances, I couldn’t see it. It also provided an interesting moment near the start, when Richard talks about his shadow, while casting a perfectly clear one as he ranged along the front of the stage.

The children were good this time out, with local actors being chosen. I can’t tell you which of the three possible children played Edward, Prince of Wales, as I only know it was one of James Lewis, Mongomery Grenyer or Oscar Langford, though I do know for sure that Richard, Duke of York was not played by Scarlett Smith on this occasion, though that still leaves Michael Knowlson or George Healy to choose from. I thought this was an oversight, because the very solid programme, which covers all the plays, contained a lot of other useful information, and they would only have needed to hand out a piece of paper with the information on.

In other parts Dale Rapley was a world weary King Edward IV (and also played the Lord Mayor as a baffled bureaucrat, a messenger, and a soldier), while Robert Gwilym played Hastings as a man who was always one step behind the plot to his own eventual downfall (and was also a soldier). David Fleeshman’s Lord Stanley was very much the cunning politician, avoiding committing to any cause until he could figure out which way the wind was blowing.

As the two murderers of the young princes Charlyne Francis and Edward Sayer were an excellent pair, egging each other on to do the deed, and then falling out over it as well. Francis also played Oxford, one of the many messengers, a citizen, and a guard, while Sayer played Tyrell who is of course the man who co-opts the murderers, a guard, and Richmond, in this instance for me playing up the sanctimonious characteristics of the man. Of course as a Ricardian, I am predisposed to dislike Richmond, and so I did! 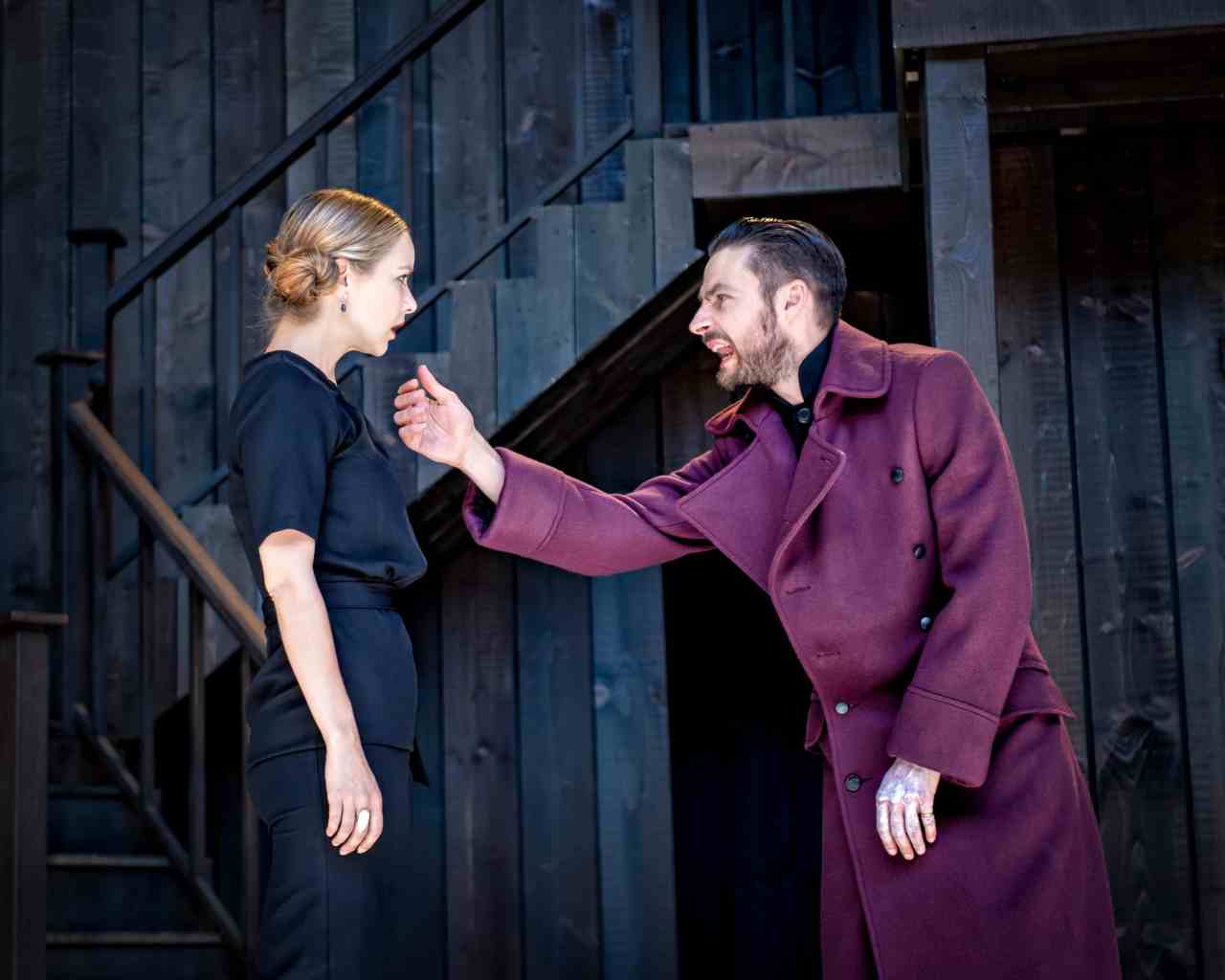 The original running time was listed as 3 hours and 45 minutes including the interval, and somewhere between the programmes being printed and the first performance they’d managed to shave a further 30 minutes off, mostly I think by cutting a chunk out of the battle scenes, meaning that there was very little time between the dream scenes where Richard and Richmond are visited in their sleep by Richard’s victims and the despatch of Richard by Richmond. It did feel a little abrupt but at least it wasn’t as drastic as some cut down versions I’ve seen over the years.

Oh, and as final though, and I’ve no idea why this has never struck me before, when the various factions go to collect the princes, why, en route to London, would anyone go from Stony Stratford to Northampton? It’s completely the wrong direction! 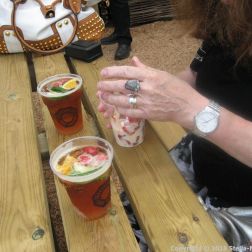 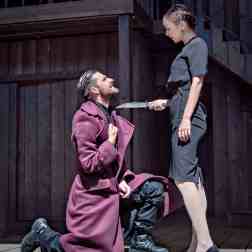 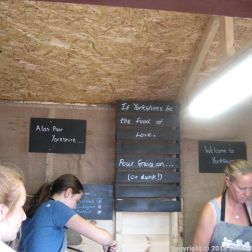 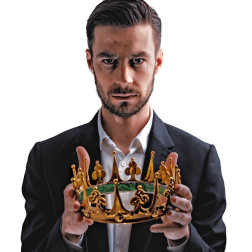 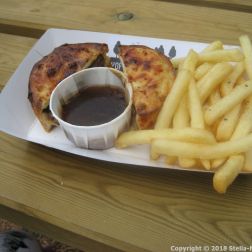 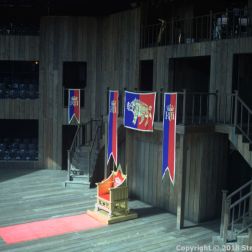 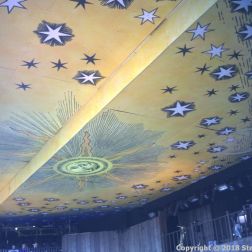