For what I think is their first ever wine and food evening, we found ourselves at the Oxford Kitchen on a school night, having finally managed to find a parking space (always problematic in Oxford) that was at least within sight of the restaurant.

The downstairs area was fully booked for the event, which represented very good value at £50.00 for four courses and matching wines. The noise levels were high as a result, but we were able to chat with our neighbours without too much effort. We all thought they’d dropped the ball a bit by not serving anything as soon as people were seated, because we ended up waiting around 15 minutes to get anything to eat or drink. They would have needed to charge a little more, perhaps, but it would have been a nice touch. Anyway, we finally got a glass each of a sparkling rosé, from Château Léoube. It was pleasant enough, but given the politics of its owner, I won’t be purchasing any is all I will say about it.

It arrived along with some rather fine canapés. First up were quail’s eggs, with a slice of duck ham draped over them, and a profiterole stuffed with cheese and truffle and utterly delightful, a pair of very fine things, as we’ve come to expect having eaten here twice now.

Also on offer were tiny cornets full of beef tartare, very nicely cut and prepared, and served standing upright in a bowl full of rice, which needed to be knocked off the end of the cornet.

We were off to an excellent start, and things got even better with the arrival of the brioches, with a herb butter and a malted butter, which is standard here. 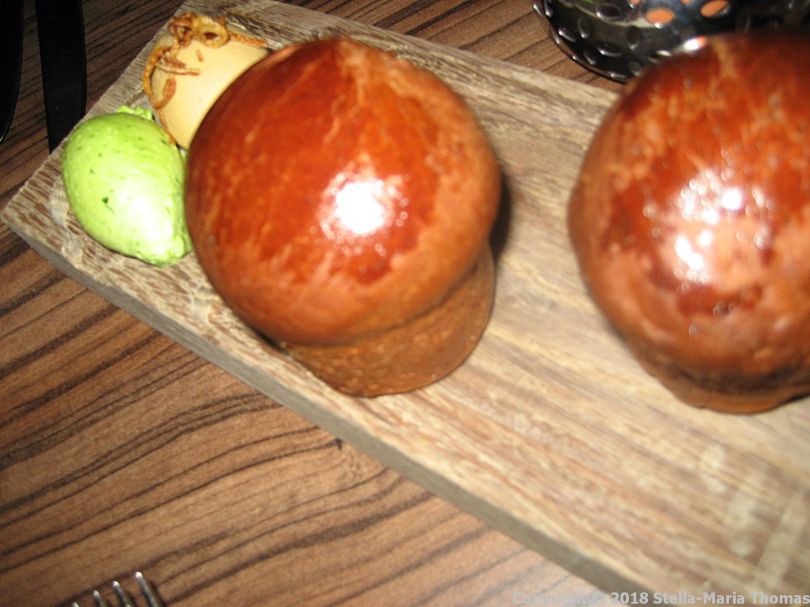 This was followed by a serving of Provencal shellfish broth, with a dollop of rouille on a crisp as an amuse bouche. I’d have loved more of it, and spent some time trying to extract the final drops from the glass with the excellent brioche. The broth was perfect, redolent of the sea, and scented gloriously. It contained several chunks of softly cooked shellfish that needed hoicking out of the bottom of the glass, and that you would not have wanted to miss, hence the brioche and careful application of a spoon. I was wearing white and didn’t end up decorated with fish soup, which is what usually happens to me. Perhaps it was the refinement of the dish that meant it wasn’t as disorderly as usual? 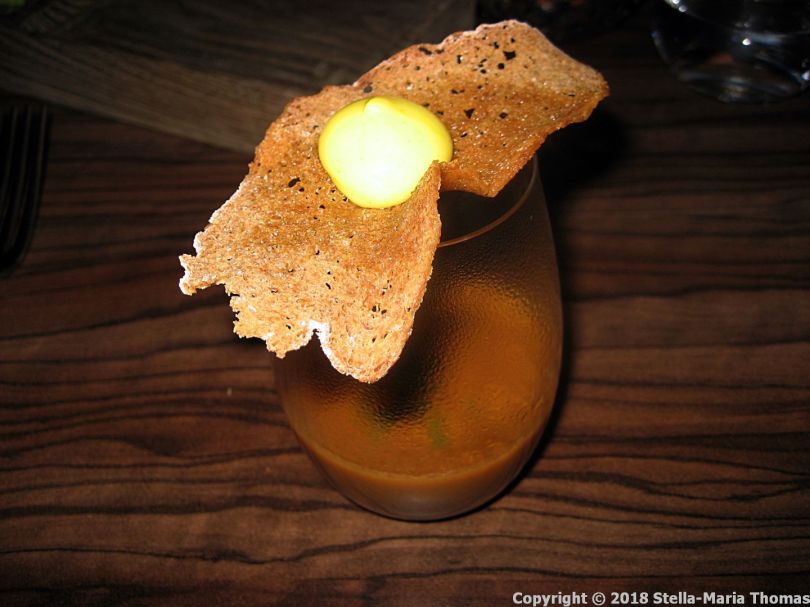 It was slightly unfortunate that we didn’t get any wine with them… Again, perhaps a little more on the cost next time might be good. Two glasses of fizz would have taken most people all the way through.

Next up was the first course proper, a salad of artichoke barigoule, with courgettes, and a small mound of very rich goat’s curd. I would argue that my artichokes were one layer from being perfect, with a somewhat tough layer of leaf left on, but otherwise it was fine. It gets full marks though for being the prettiest dish of the night.

It was accompanied by one of those gloriously pale wines that are so common to Provence, a Château de la Clapiere Rosé, La Violette Cru Classe, Côtes de Provence that was a fine example of the sort of wine I fell in love with when we first went to Provence in the late 1980s.

Next up was exactly the dish you would expect of a Provencal evening, a rump of lamb, cooked in the sous vide machine, and the roasted to finish off, with a dark green pine nut and herb crust, green olives, and a punchy salsa verde. It was gorgeous, tender, just as we like it. 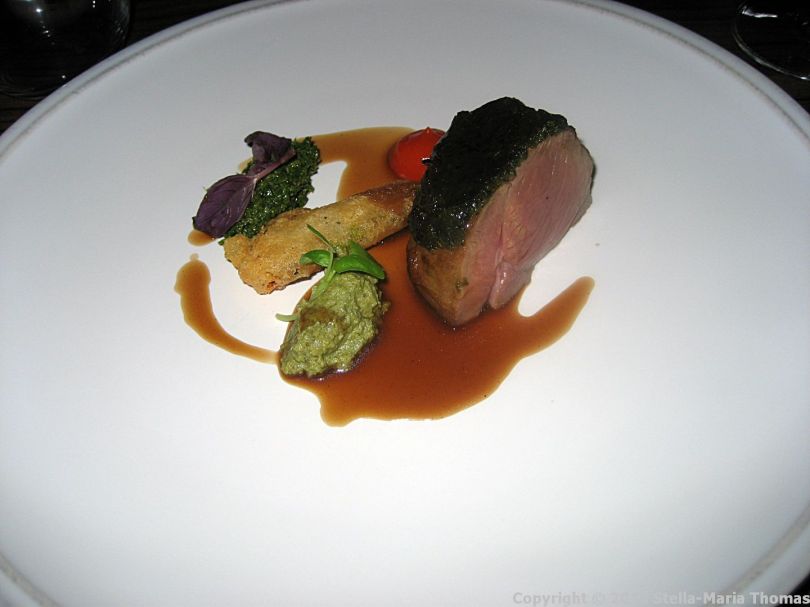 This was accompanied by a lovely – though not really Provencal red – a Domaine de Pisan, Caves de Rasteau, which despite the “expert” on the night’s claim, is not a Cotes du Rhone, so much as a Rasteau AOC wine, and very good it was too. However, I was beginning to have my doubts about the expert…

After we had finished the wine (and managed to snag a refill), we hit the cheese. Now Provence is really not known for its cheeses, so they’d had to stretch the point a little here, coming up with a portion of Bleu d’Auvergne, another of slightly underripe Pont l’Évêque, and the one geographically correct morsel, a piece of Banon à la feuille, wrapped in a dried vine leaf and which oozed spectacularly once it had been prodded with a knife. I failed to take a photo so you’ll just have to imagine it. It was partnered with a Rosé de Léoube, which to my way of thinking was slightly too gentle a wine to go with three pretty robust cheeses.

We ended the evening with a dessert of a roasted peach, with elderflower ice crean, a sablé Breton, and almonds. It was tremendously good, sweet and sticky and shot through with crunch and with the flavour of almonds running right through every mouthful, but without overpowering the other ingredients.

Dessert wine was again non-Provencal, but from the Rhones, this time a Muscat de Beaumes-de-Venise Vidal-Fleury that was perfect for the food even if it didn’t fit the evening’s billing. I’d have liked an “expert” with rather more knowledge to impart than he seemed to manage. I don’t need to know if the chateau is attractive or not, but I do need to know more about the wines, about the vinification, and about the varietals… Maybe I’m being overly picky, because in every other respect it was a great evening, and I’d happily go to another one, despite a couple of reservations around the wine choices, and the choice of “expert”.