This was one we’d been meaning to try for a while, having heard good things about it on the grapevine. There was a rumour the chef had once worked at the late lamented Roade House, and that he was in good form here. We were keen to try it out.

From the outside The Hopping Hare looks a lot like almost any neighbourhood pub, perhaps bigger and a little better kept than many, but nothing special. The car park, however, was packed even at 18:30 on a weekday, which suggested that the people parking up may know something about the place. It has a handful of rooms, and seems to be popular with business travellers if the number of single diners we saw was any indication.

We were slightly early so we settled in at the bar with a glass of prosecco, served by a charming barman. All the staff we interacted with were all lovely, charming and well informed, so on that side they definitely scored highly. So did the dining room, which is dark wood and subdued colours and very welcoming. 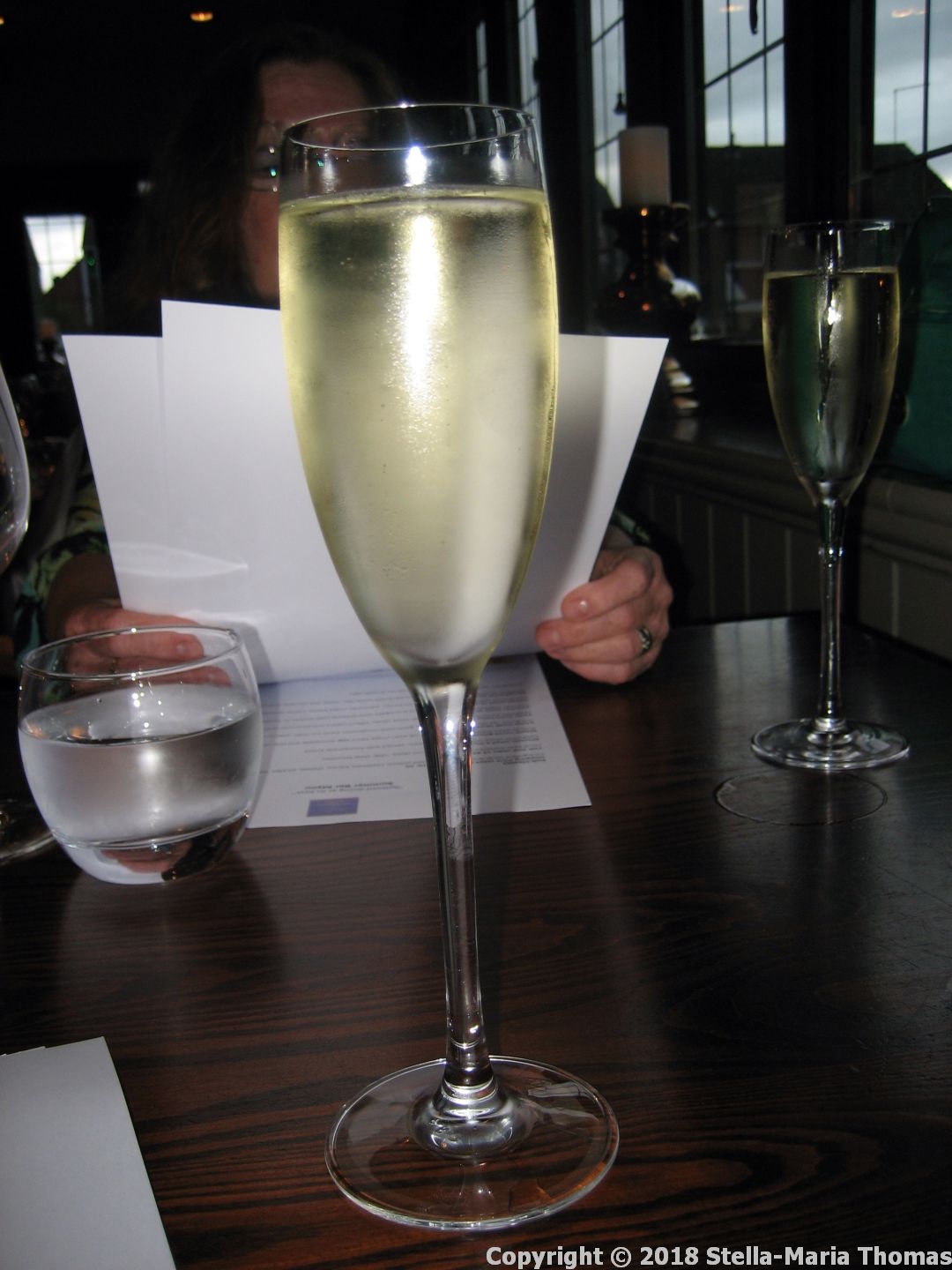 We were handed the pre-19:00 menu, the set menu and the a la carte menu and spent some time batting ideas around as to what we really wanted to eat. We went fishy at the starters stage, with a portion of their Scottish smoked salmon, which came with a nicely crunchy pickle of sweet and sour cucumber, with a big blob of horseradish sauce, and some soft blinis. It was good, though it was more a matter of advance prep work than actual cooking. Didn’t stop me from enjoying it though!

The other starter was the more interesting, being slightly more unusual, with lovely sweet Devon crab and crisp, crushed broad beans piled on sourdough toast, and swirled through with a brown crab infused mayonnaise, some lambs lettuce and a handful of flavoursome cherry tomatoes. It was a lovely thing. I’d just have liked more of the white crab, but that’s always the case. It’s a bit like mushrooms. You can never have too much white crab meat. 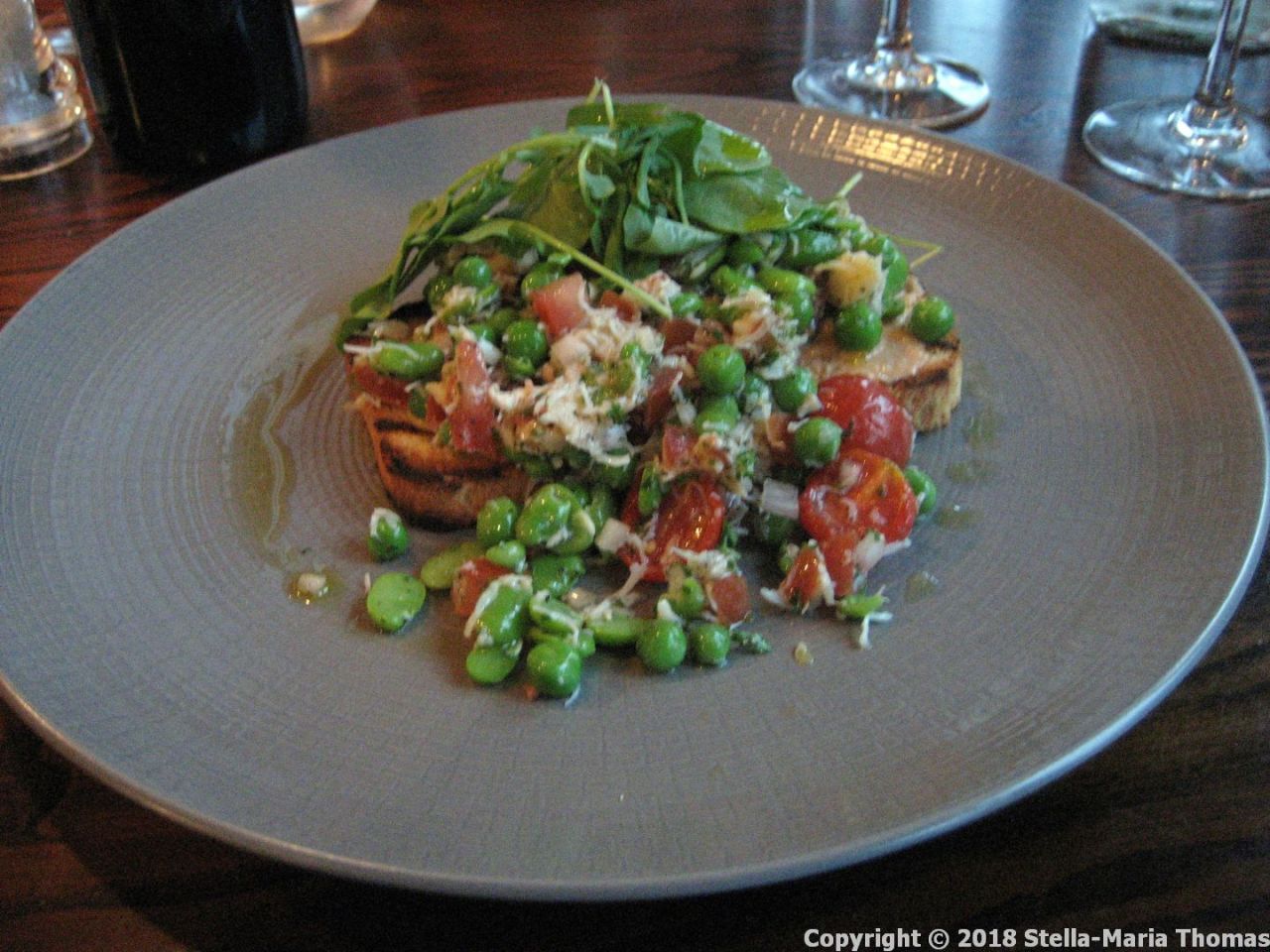 For mains we chose the duo of lamb (a lovely, pink, tender rump, and a slice of crispy lamb breast), served with pommes Anna and “ratatouille”, proving that the classics are classics for good reason. The meat was very nicely cooked,and the ratatouille, while partly deconstructed, was rich and tomatoey, and went beautifully with the lamb. The potatoes were properly done too, soft all the way through and well-flavoured.

The other main was another classic, this time an oven roasted Barbary duck breast, with crispy skin and perfectly pink flesh. It was accompanied by baby vegetables, a well executed fondant potato and a glossy, sticky delicious sauce, dotted with black cherries.

The wine list is relatively short but we found an acceptably deep, dark Argentinean Malbec from Norton’s Bodega la Finca, which you won’t be surprised to know was a very well-matched accompaniment to the mains, and we had enough left to see us through the dessert stage of the evening.  Actually, we weren’t going to have anything, but then it turned out they have a cheese menu! How civilised! It would have been churlish to refuse, so we didn’t.

We couldn’t make a decision so we went for all four, but just one portion to share between two of us. And so, a plate of Northamptonshire Blue, Bosworth Ash, Wookey Hole Cheddar and Oxford Isis was produced and demolished in pretty short order.

My only complaint about the cheeses is the perennial complaint in English restaurants. Unless they are really high end, the cheeses are usually kept in the fridge, and a fridge cold cheese really doesn’t taste as good as it should. It’s flavour is muted, and that’s a shame. If I knew I was going to definitely want cheese at the end of a meal, I’d be tempted to order it at the start of the meal and let it warm up.