We were due to leave on an early afternoon flight, and a car had been booked to pick us up at 11:30 so we figured we’d have time to go and see at least a tiny part of one of Kyiv’s greatest monuments, the Lavra (which was where our colleague had tried to take us on the first day, her efforts derailed when the Danes were driven to the wrong hotel and thus arrived far too late). It meant we were checked out with our luggage being stored by the hotel by 08:30. The receptionist sorted a taxi for us, and we figured we’d either try and pick one up at the other end to come back or we’d try out public transport and take the Metro. The cab whisked us across town and we got there just after 09:00 when it was all still very quiet, apart from a number of worshippers making their way to the first service of the day. 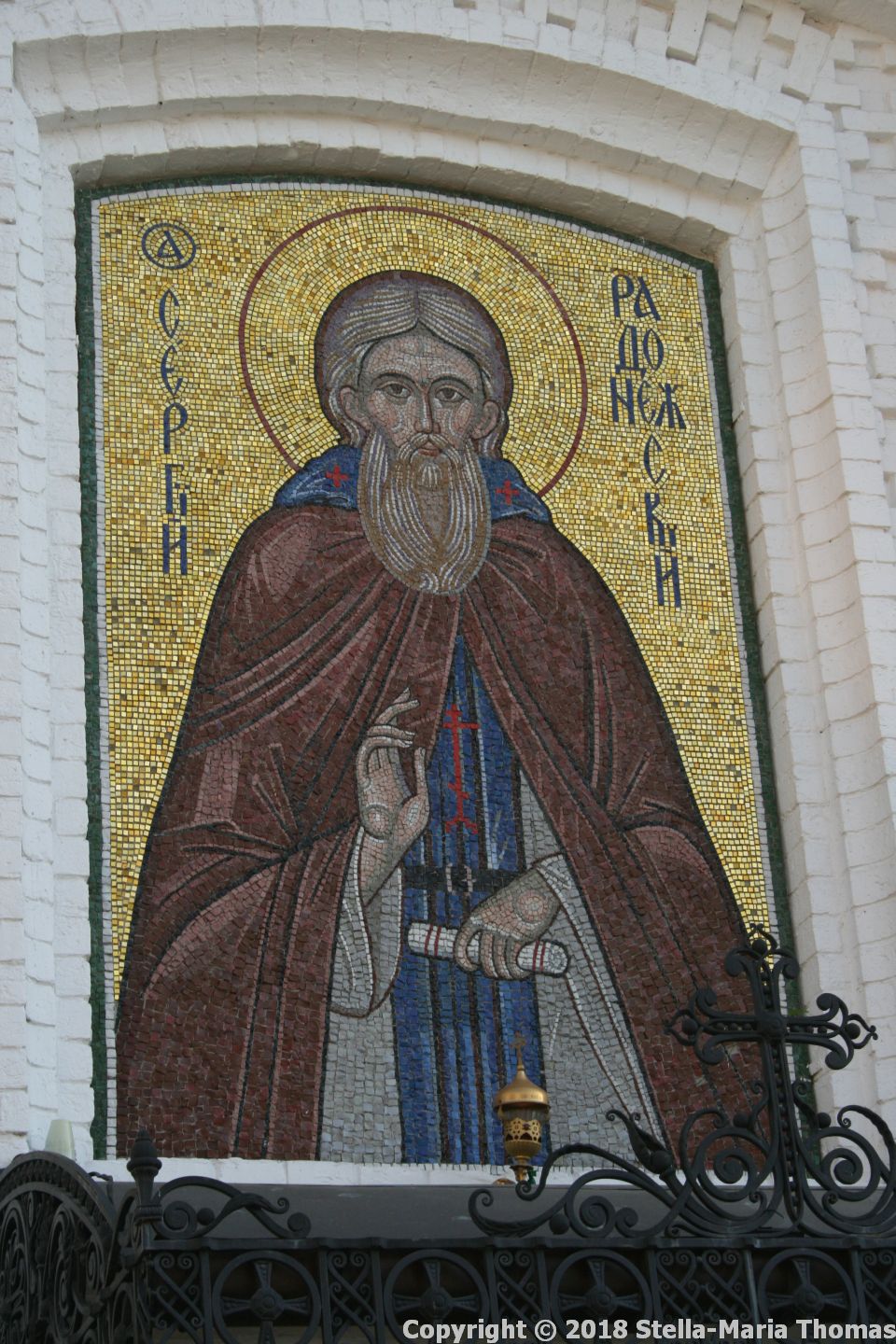 We paid up for tickets to go inside the “territory” which cost around £2 and I bought a photo permit (£6) so we could roam around the vast complex. The Kyiv Pechersk Lavra (Києво-Печерська лавра) is vast, but basically started as a cave inhabited by hermits. It’s a UNESCO World Heritage Site in conjunction with Saint Sophia and its associated buildings in Kyiv, which shouldn’t surprise anyone who has seen it.

It was founded as a cave monastery in 1051 and is both the oldest monastery in Ukraine and one of the pre-eminent centres of Eastern Orthodox Christianity in Eastern Europe, in this instance under the control of the Russian rather than Ukrainian orthodox church. After a period of disuse (the Soviets turned it into secular accommodation) it is once again active, and there are monks in residence, so while it is a massive tourist attraction, it’s also a religious centre of great significance, hence the service in full flow in the cathedral. The whole place has been destroyed more than once, including during WWII, but each time it has been rebuilt, and it’s breathtakingly beautiful, especially on a quiet, sunny Autumn morning.

I’ll quote from the UNESCO pages here: “The Kyiv-Pechersk Lavra is an architectural ensemble of monastic buildings situated on the plateau overlooking the right bank of the Dnipro River. The ensemble was formed over many centuries in organic combination with the landscape, and acts as a general urban dominant. Founded by St. Anthony and St. Theodosy in the 11th century, the monastery became a prominent spiritual and cultural centre that made a significant contribution to the development of education, art and medicine. The architectural ensemble of Kyiv-Pechersk Lavra comprises unique surface and underground churches from the 11th to the 19th centuries, in a complex of labyrinthine caves that expands more than 600m, as well as domestic and household buildings from the 17th to the19th centuries. The architectural ensemble acquired its modern aspect as a result of construction activities in the 17th to the 18th centuries in the heyday of the Ukrainian Baroque. The main monuments of the Kyiv-Pechersk Lavra ensemble are the Dormition Cathedral, the Trinity Gate Church, the Great Bell Tower, the Church of All Saints, the Refectory Church, the monastery defensive walls with towers, the cave complexes of St. Anthony (Near) and St. Theodosy (Far) with surface churches, the Exaltation of the Cross and the Nativity of the Virgin and the Church of the Saviour on Berestovo. For centuries, the Kyiv-Pechersk Monastery, with relics of saints buried in caves, has been one of the most important Christian pilgrimage centres in the world.” 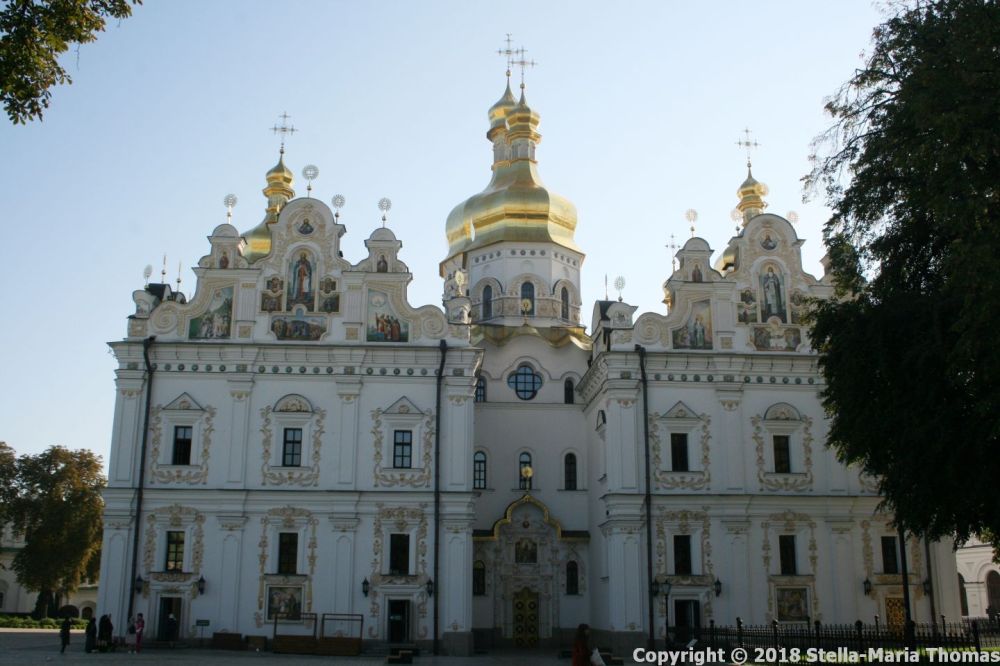 We had about an hour and a half to spare, so we knew we’d only scratch the surface here. The cave monastery itself, which contains the mummified remains of the hermits who lived there, sounded a little too macabre for such a fine morning, so we went inside the stunning Dormition Cathedral where a service was in full swing, again with the most beautiful singing. We weren’t allowed to take photos inside, but suffice it to say it’s very shiny, with lots of gold mosaic tiles, and very impressive indeed. The outside is decorated in gold against white walls and it looks incredible in the sunshine. There’s a great deal to be said in favour of Ukrainian baroque!

I did sneak a photo in one of the side areas of the cathedral. 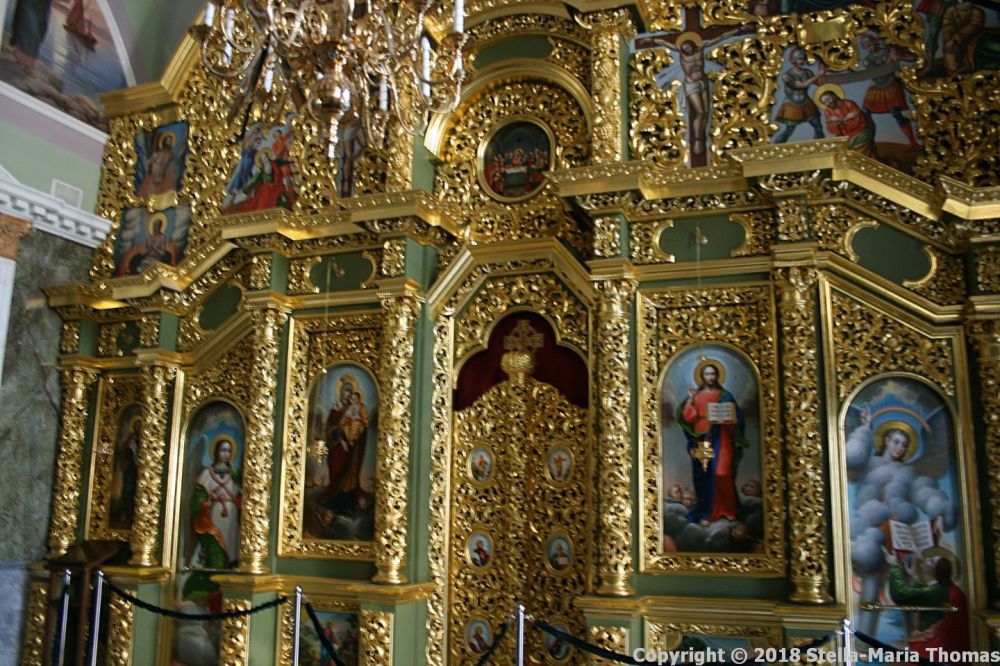 We weren’t sure how long the service would last, and we knew that we wanted to climb the bell tower – all 397 steps. The bell tower leans somewhat, and offers stunning views over the complex, and beyond to the city. It was a tough climb in the heat, and we were both puffing more than slightly when we reached the first level and could look out over the cathedral and beyond. It soon becomes obvious just how mindbogglingly big the whole thing is. 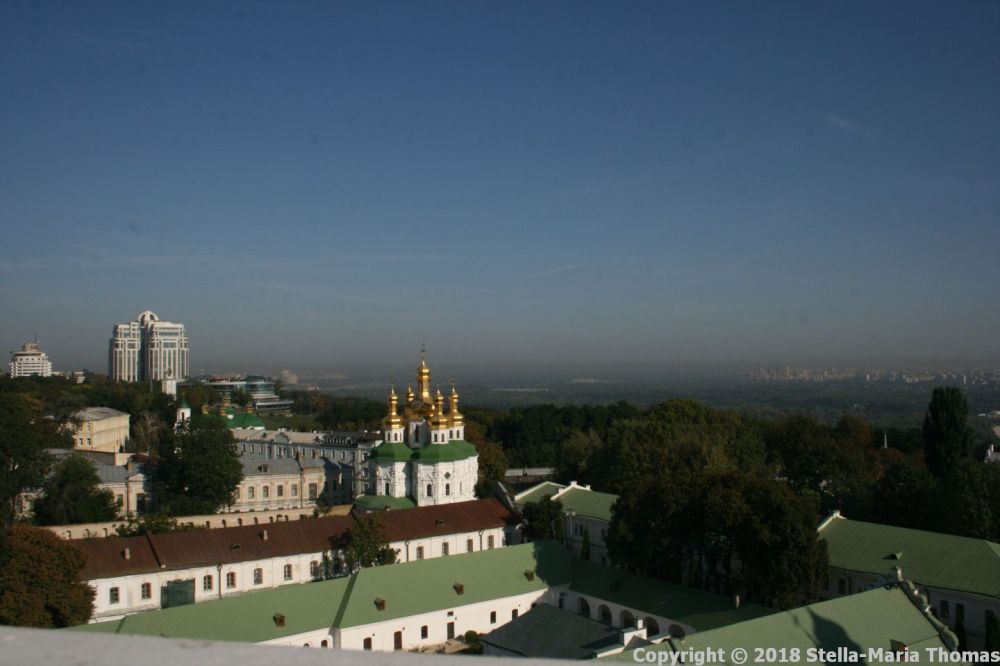 We took a breather, and then set off up the next lot of stairs to the upper level where we could see the bells up close. 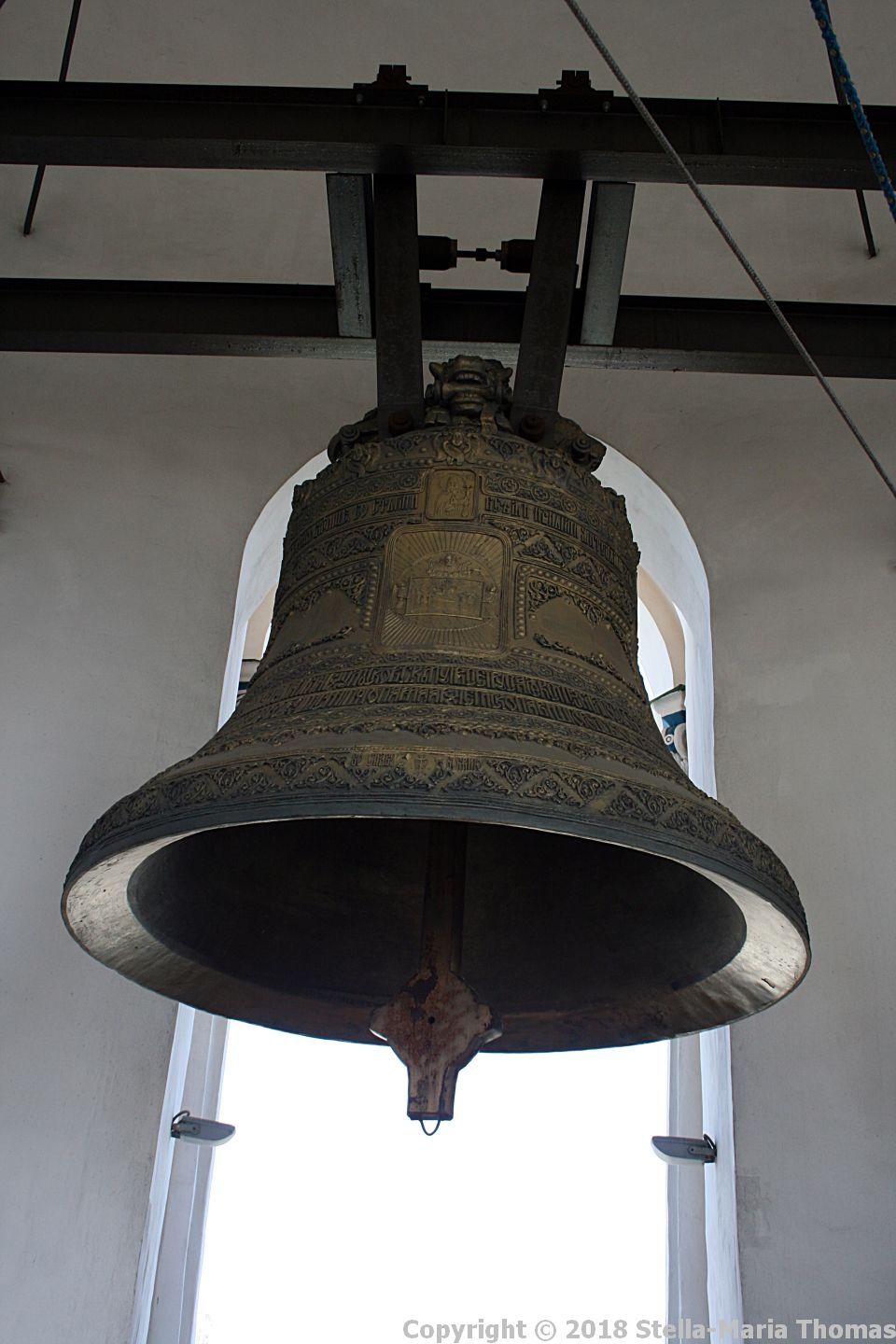 Looking out we could see a very long way. Included in the view was the monumental – in every sense of the word – statue of the Motherland Monument (Батьківщина-Мати). The sculpture is part of the Museum of The History of Ukraine in World War II and may well be worth a visit. The weather was a bit hazy, but she’s massive as she stands there protecting the city, all 62 m (203 ft) and 560 tons of her,  sword in one hand and shield in the other.

Now the vistas really opened out, but it also provided a complete view of the cathedral and the other buildings, with no barriers to get in the way.

We clambered back down and made an attempt to get inside the Gate Church of the Trinity (Троїцька Надбрамна церква). This is the oldest church on the site, although it’s been reconstructed many times. It was built in 1106-1108 as part of the fortifications, and was founded by the grandson of the Prince of Chernigov, Sviatoslav II, who renounced his princely status and became a monk on November 17, 1106 under the name of Mykola Sviatosha. He spent his remaining 36 years as a monk, and founded the Monastery Hospital of the Trinity within the Lavra. Sadly on the day we visited it was shut, seemingly as it’s undergoing renovation of some sort.

With that, we realised we were running out of time and we had probably better get back to the hotel. I did stop to take a photo of the odd egg in the middle of the courtyard.

Outside, as I had expected, there was no possibility of getting a taxi, so we set off to walk to the Metro at Arsenalna. The guidebooks suggested it would take half an hour, but we managed it in 15 despite me stopping to take some photos along the way, the first being of the National Museum of Memorial to Holodomor victims, the man-made famine, planned by Stalin to wipe out a possible Ukrainian independence movement. According to the Court of Appeal of Kyiv in 2010, the demographic losses due to the famine amounted to 10 million people, with 3.9 million deaths as a direct result of the famine, and a further 6.1 million birth deficit. The causes are still the subject of academic debate, and some historians dispute its characterization as a genocide.

Further along we found the Tomb of the Unknown Soldier in what I now know is the Park of Eternal Glory (Парк Вічної Слави), the monument commemorating all those who died in World War II, presumably including my father’s twin brother.

Shortly afterwards we located the Arsenalna Metro Station, the world’s deepest underground station. After a few minutes of relative confusion, we figured out how to pay for our journey, and were soon on the incredibly long escalators that take around 4-6 minutes to get you to the platforms.

For those of us used to London, these escalators are very fast, and you have to get on them quite sharply. It’s slightly disconcerting, actually. We changed lines at the next station, which seemed to require a great deal of walking. It’s all very impressive down there, and I can see why people consider the Metro system to be a tourist attraction.

We got off at Olimpiiska (Олімпійська) which is also impressive, and was where we managed to end up accidentally buying another ride that we didn’t need. The lighting and fittings down on the platform level are wonderful. 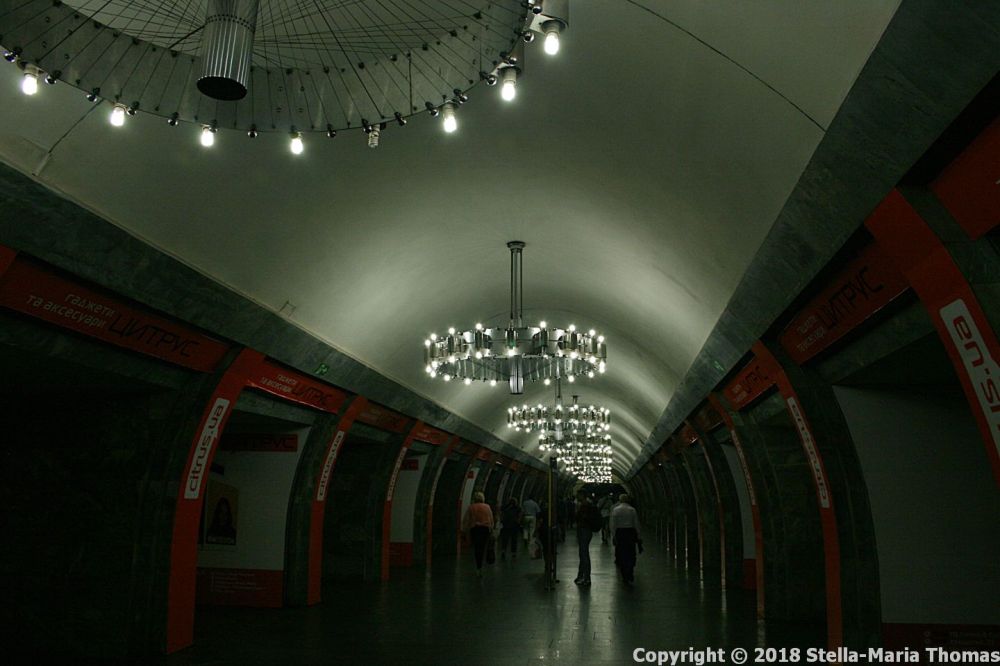 And so, back to the hotel, where we had a short chat with the receptionist, and then our taxi driver arrived to take us to the airport. I did manage a few more photos on the way, spotting another set of murals on the end of half a dozen apartment blocks.

The flight home was incident-free and I’m now looking forward to the possibility of going back again next year.