This was a day when I let my colleague choose where we went for dinner, though to be fair he had requested that we go to Kødbyens Fiskebar the first night and I’d left him to his own devices on the Tuesday when I went out with a friend instead. He got no argument from me as a result. We made our way to the restaurant, Tight, which is tucked away down a side street over near the Davids Samling. We were pretty much the only diners there quite so early in the evening, so we were soon at a table and studying the menu. I was also drinking a somewhat implausibly-named cocktail, a fruity sparkles, which was far less twee than its name suggested. The mix was  vodka, rhubarb and strawberry, hibiscus and ginger, lemon and prosecco. It was quite sweet but packed a punch and the ginger gave it heat. It was also quite pretty though I would argue it doesn’t really sparkle! 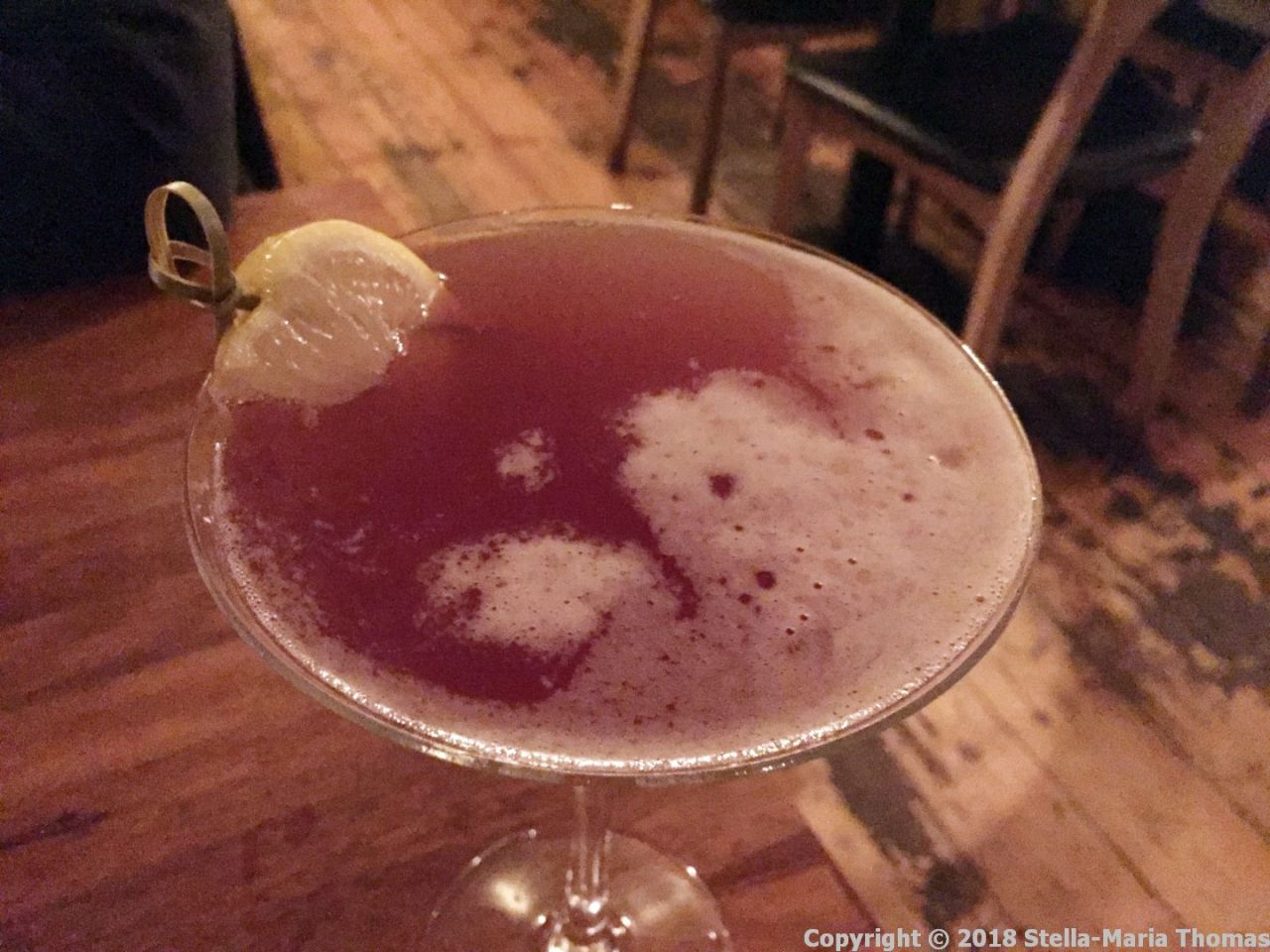 Eventually I decided that I really fancied the shellfish croquettes. I have a soft spot for croquettes, who doesn’t? A soft centre bound together with bechamel sauce, a breadcrumb outer coating made crisp through deep frying, what’s not to like? These were good ones, served with a salad of spring onions, chilli, and coriander with wakame seaweed, and tarted up with a tomato chilli chutney. It was a good start, very solid home-style cooking, and would probably have made a main course for those of us with less substantial appetites. 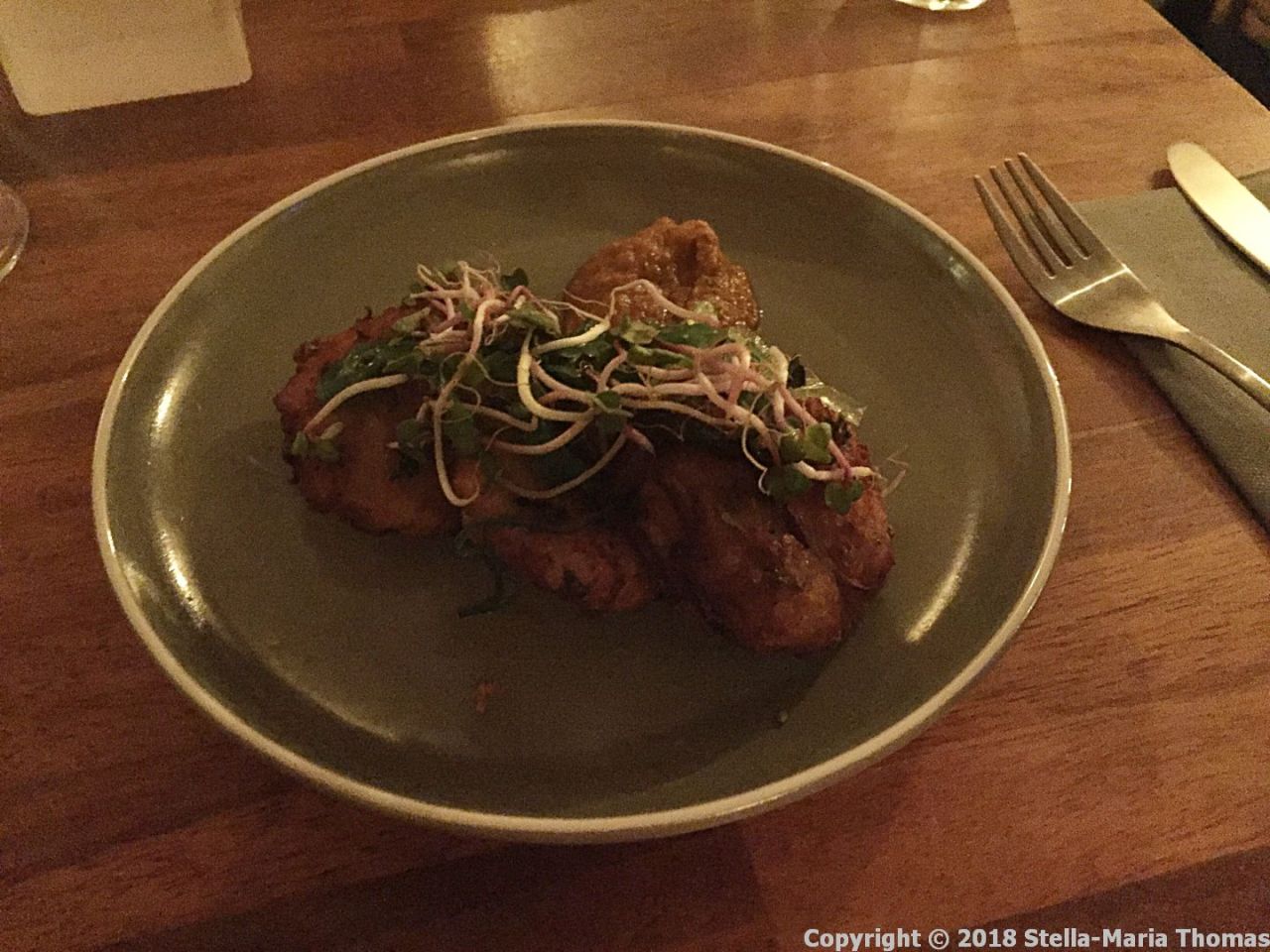 Andy went for the lobster bisque with fish, shellfish, fennel and roasted coconut shavings, and he seemed to enjoy it immensely. He did offer me a taste but I declined on the grounds that I’d eaten quite enough already and I still had a main to get through. 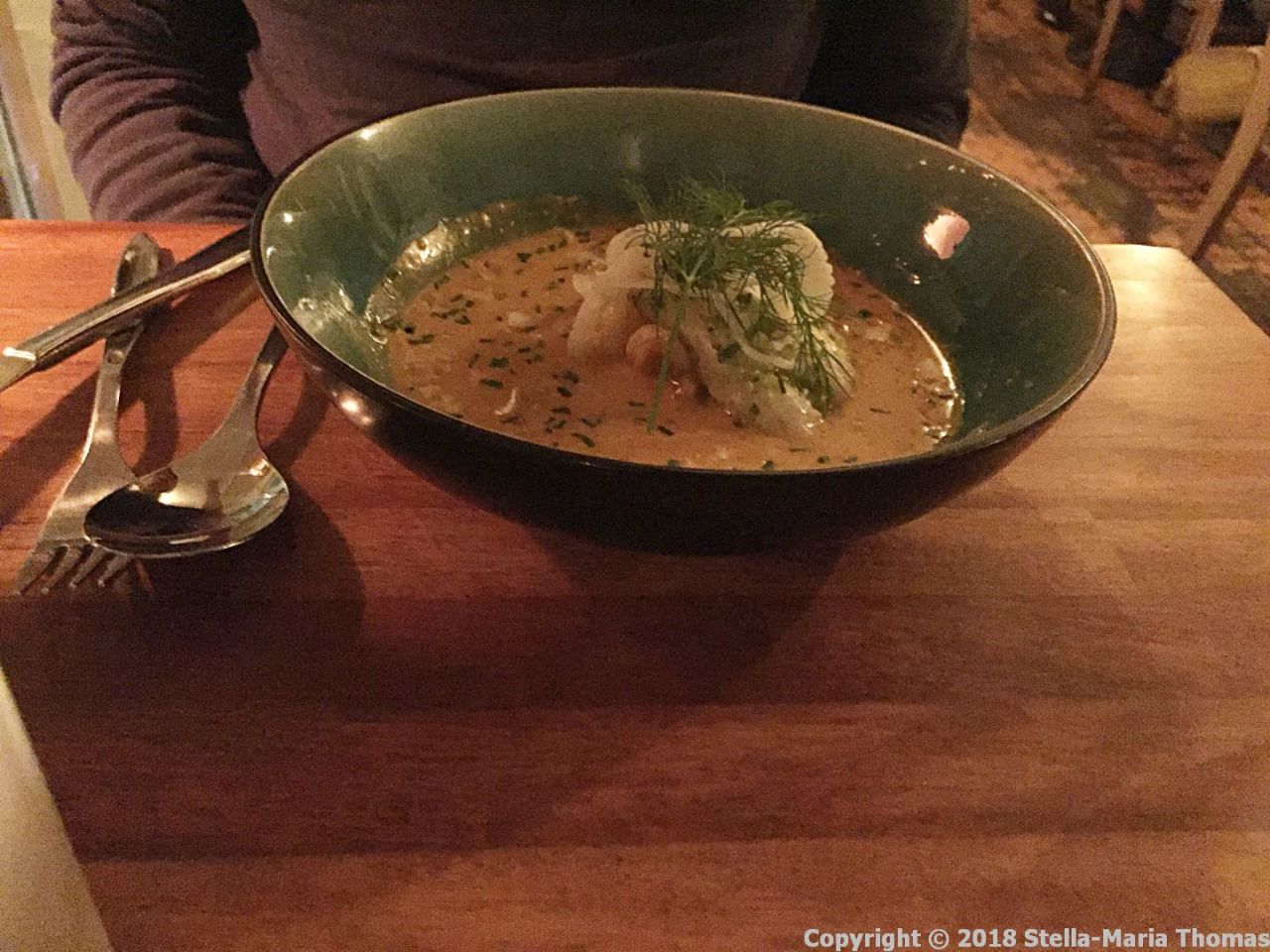 He followed the bisque with a burger clapped between two chunks of foccacia, loaded with caramelised onions, mushrooms, emmental cheese and bacon, and should there not be enough carbohydrate on the plate for him, there was also a portion of garlic roasted potatoes! The chef is determined you won’t be hungry when you leave. 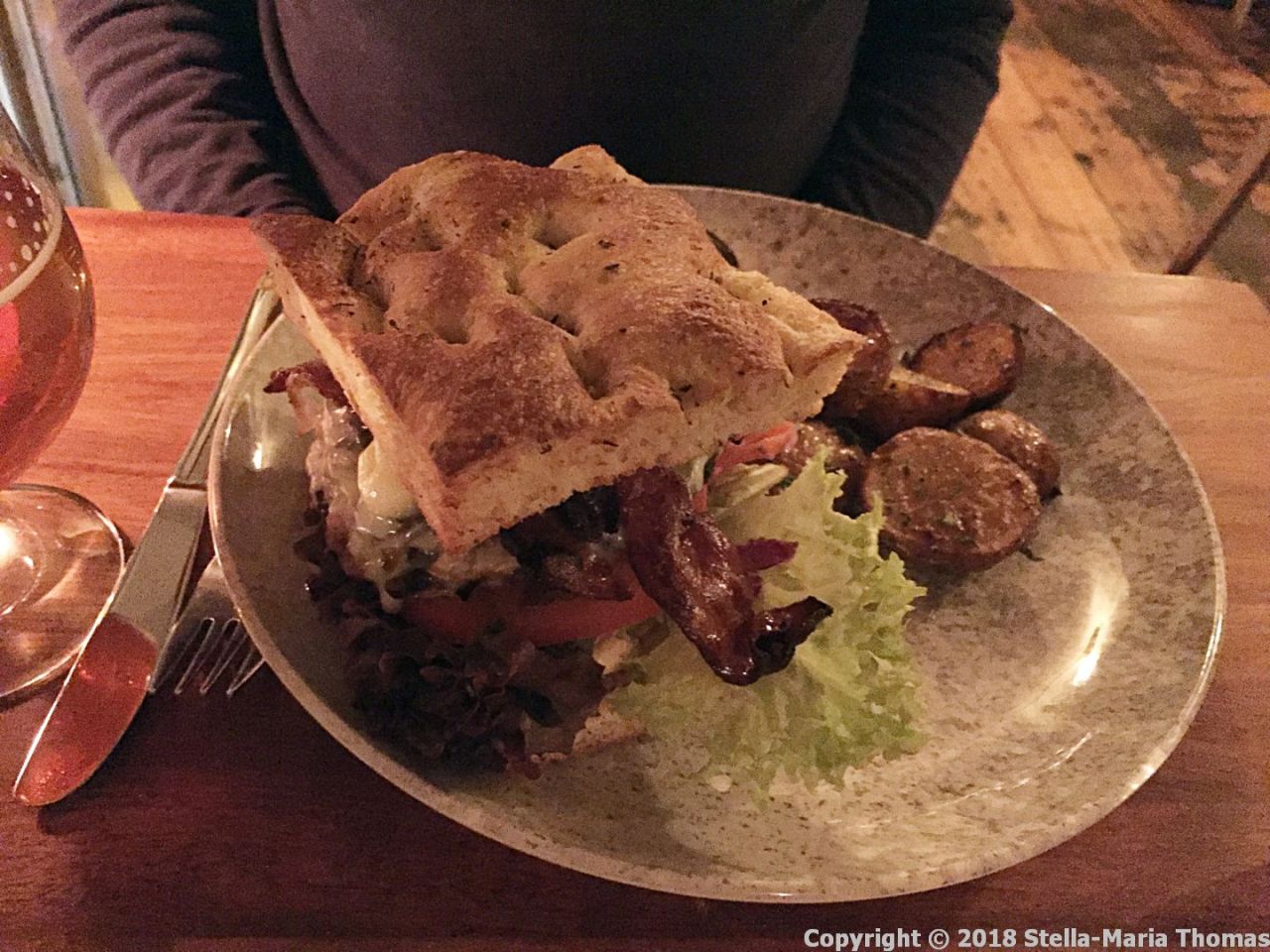 I had what I hoped was going to be a more moderate plate of roast veal with a madeira reduction, stewed chanterelles, marinated wild berries, potatoes turned in parlsey, and red onions in balsamic. It was nicely done, and I’d be more than happy to be served something like that in someone’s home or in fact in my own home. There were crisps and watercress as well, and it pretty much hit the spot though it’s not going to win any awards. 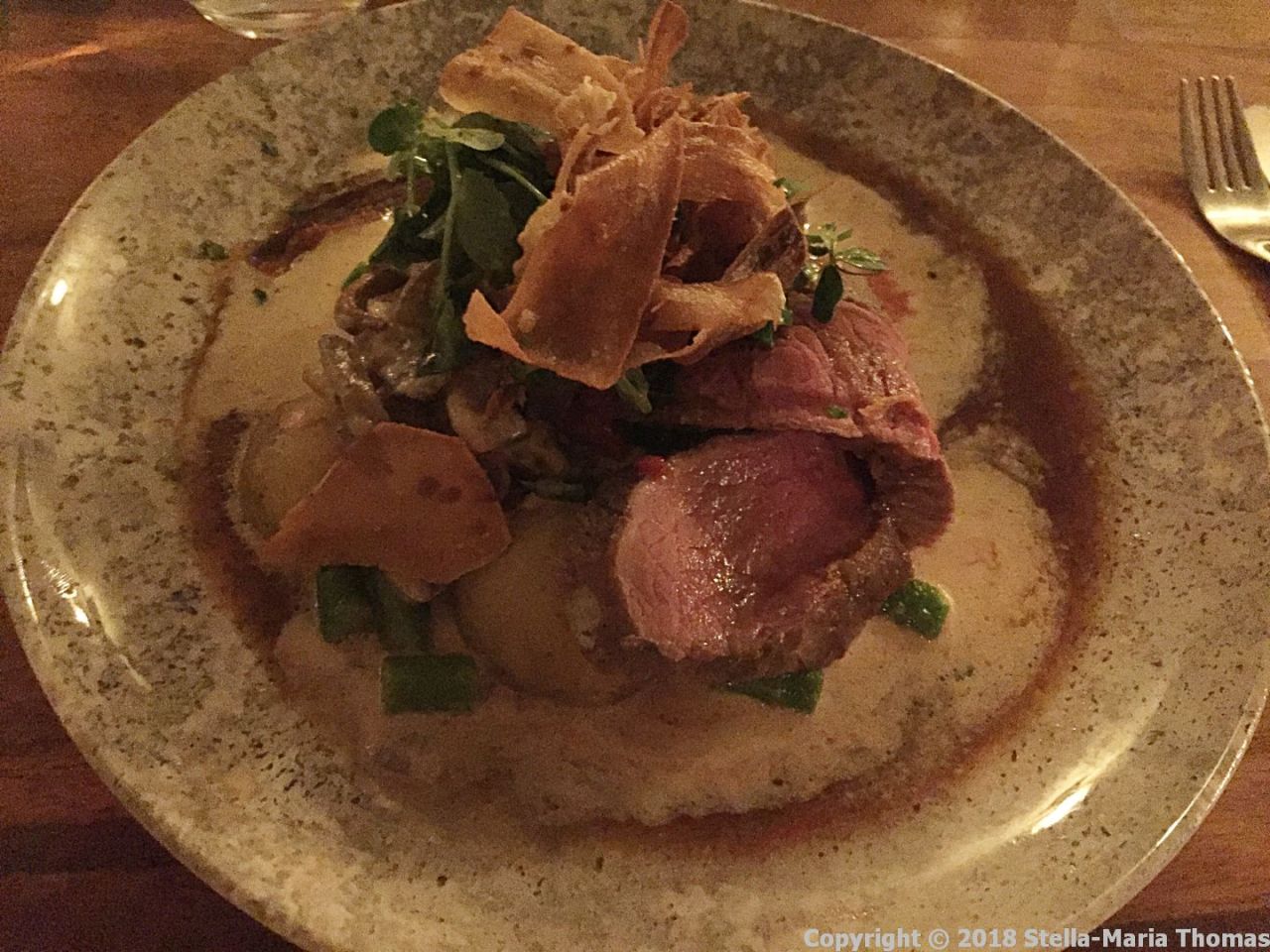 The service was friendly, and relatively swift, at least until we wanted to pay the bill, when they all mysteriously vanished. We eventually routed someone out and settled up. It was a good, solid meal, in what I’d call a family restaurant of the sort we really don’t have in the UK any more because they’ve been edged out of the market by the chains, most of which are all about parting you from your money as fast as possible for the lowest outlay they can manage. It’s a damn shame, frankly. 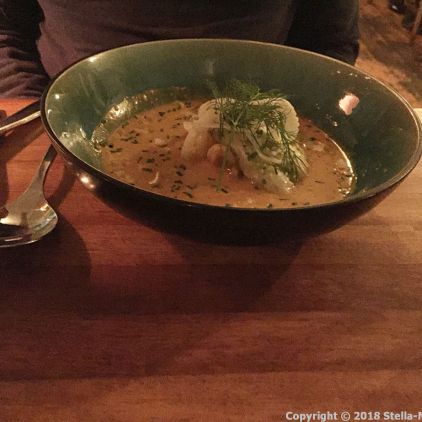 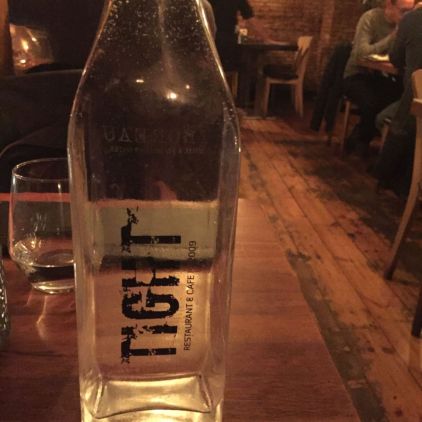 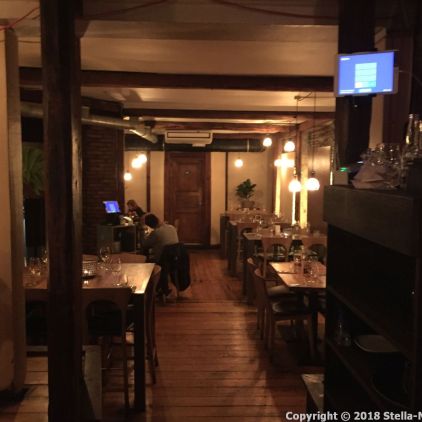 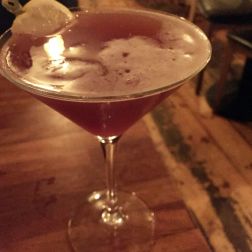 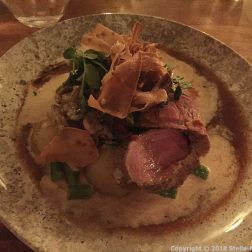 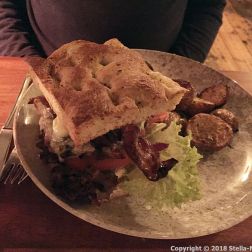 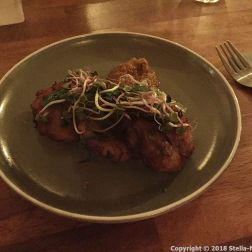 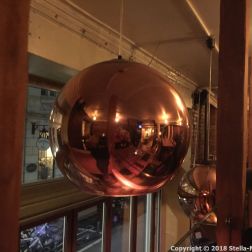 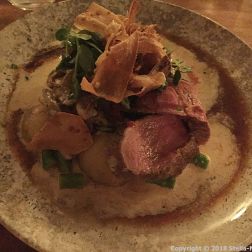 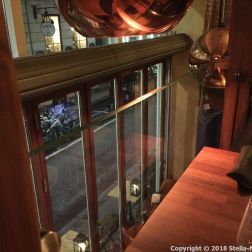 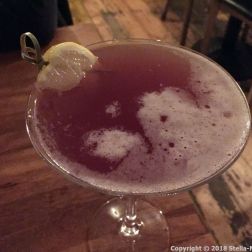 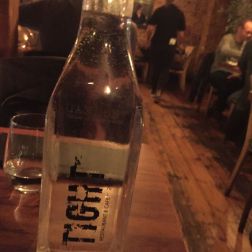 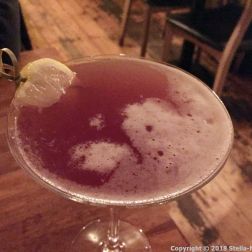