Once again we put ourselves in the hands of the guides, with the White Guide describing Gastrobar EMO as somewhere that “has a toned-down, Japanesy feel to it with vertical textile screens that do very little to stop your neighbours from hearing or seeing what you’re up to… There’s a low-key sophistication about Gastrobar EMO that seems to appeal to business people” while Michelin says it’s “a laid-back restaurant with an adjoining bar, run by a friendly team. The menu is easy-going too, offering around 10 regularly changing dishes that can be taken either as starters or main courses. Good quality ingredients feature in flavoursome, unfussy preparations which come with a contemporary touch.”

It seems to be a place to not so much see and be seen, but to prove you have a sophisticated palate without scaring the horses. This is probably for those who might find Ask too avant garde. It is indeed “Japanesy” and we were shown to a small room off the main bar area, which was cosy without being overcrowded, a handful of well spaced tables meaning you didn’t feel you were being overheard but also didn’t feel you were dining alone.

We ordered an aperitif then settled to study the menu. The possible tasting menus were four, six or eight courses and eventually we plumped for the “Six Pack” with matching beverage pairings. We had a short discussion where we wanted to ensure that the “dishes chosen by our chef” included the elk, and offered to pay a surcharge if necessary to make it happen since it was quite the most expensive dish on the menu. As it turned out, they didn’t charge any extra.

While the first course was being prepared, we were kept happy with the bread and butter offering, with a sourdough and a sticky, dark malt bread alongside some lovely fresh salted butter.

The first course arrived, an almond potato flatbread, topped with vendace roe, sour cream, and some lightly pickled onion rings. It was creamy and fresh and tasted very much of both the roe and the almonds in the flatbread. It was a good start, not complicated, just beautifully prepared.

The second dish was a roasted pumpkin so soft it was closer to a puree, with kombu, cream and feta cheese. The iodine hit from the seaweed and the salty Feta stopped the whole from being too sweet, and gave balance to the dish. The sourdough bread was great for mopping up the leftover juices too.

In common with pretty much everywhere we went, celeriac was a big feature of the kitchen here too. We were served roasted celeriac, with organic grains from Malmgard, strips of sharp-juiced apple (possibly something like a Granny Smith) and mes cheese, making a rich sauce that matched the earthiness of the celeriac well.

What came next was the absolute standout dish for me, Emo’s own linguine, with truffle and Parmesan cheese. It was rich, dense, glorious, and another one of those desert island dishes that I could happily eat repeatedly without ever getting bored with it.

If it had not been for the linguine, then the absolute knockout would have been the glorious, tender (so tender you could probably have cut it with a spoon) elk sirloin, in a perfectly rendered game sauce, with sunchoke (it’s still a Jerusalem artichoke whatever other name you try and give it) and mushrooms that prove the classics are classics for a reason, something I am sometimes known to shout at the TV when watching Masterchef! It was lovely, a proper winter dish and we both enjoyed it enormously.

To finish we had baked apple with a yogurt ice cream, cinnamon patisserie (in the shape of a shard of sugary pastry) and an oat crumble, that made it close to an apple crumble though it’s not a proper crumble is it doesn’t have custard. It still worked though Lynne – who is sometimes known as the custard mite for reasons that will make sense only to fans of the original Dangermouse cartoons – could be heard to mutter something faintly rebellious about the lack. It didn’t stop her eating it though.

And so we stepped back out into a cold Helsinki night, making our way back to the hotel for another good night’s sleep. 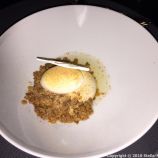 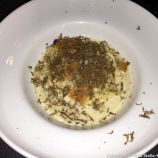