On our last day, having been running already on the trip, I woke up early and decided that I was going to try out the new-ish (well, it was still under construction when we first visited) Allas Sea Pool complex down on the harbour side. I didn’t think I’d be testing out the actual sea pool section of the complex, not when the air temperature was around freezing, but I was certainly game to try out the outdoor heated pool. I made it down there around 7.00 am and sorted out entry, a pretty eye-watering €14 for an adult swim, and a further €8.50 for towel hire, and changed, being impressed by the way my wristband served to lock one of the lockers easily and effectively. Oh, and it you want to swim for a month it’s much, much cheaper – the monthly ticket price is €55 for 30 days. If I lived in Helsinki, I reckon I’d be buying a membership and I’d be in there most days, especially as an annual ticket is €420 and you get an extra 3 months on top of the standard 12, coming out at €28 a month which seems a pretty good price to me.

I walked outside after showering and was charged out of the way by three young Chinese men who ran over to the sea pool, which is fed straight from the Baltic. I heard them splash in, then heard three pitch-perfect screams and 10 seconds later they came charging back past me headed for the indoors! I was most amused. The heated pool is a decent length with plenty of lanes, and it’s lit from below. I enjoyed a 30 minute session, not bothering to count lengths, just keeping going until I figured it was time to get out and head back to the hotel for a proper breakfast and packing before we checked out and went to explore one or two more places on our list. I was not surprised, though I was impressed, by the metal post box outside the pool where you could leave the chip from your wristband, and the pair of orange handled Fiskars scissors firmly chained to it to enable you to cut the wristband ribbon.

I enjoyed the walk back because it was still dark enough to really appreciate the Christmas lights, and I was also able to dive into the K-markt supermarket to see if I could pick up some Fazer drinking chocolate (I couldn’t but I did get some Moomin biscuits) and then I was back at the Klaus K, ready to pack, shower properly, and have breakfast.

Post breakfast we packed. checked out and asked the hotel to keep our luggage safe while we went out for the day. Our flight home wasn’t until 19:30 so we had pretty much a whole day to spare which is how I like to do these weekends away. It seems a bit daft to fly home straight after breakfast; you’re still sacrificing a day’s holiday, but you’re not getting anything much in return for it.

We hopped a tram to Hakaniemi Market Hall, and had a nose round in the temporary market hall that is standing in while the original is renovated. Just because the hall is temporary does not seem to be cramping the style of any of the stall holders, and it made  me wish we had the car with us so we could load up with stuff and take it home!

After that we decided we’d test out the Metro which works very smoothly (and is included in the Helsinki Card, as is all public transport) and so we rode around for half an hour admiring some of the stations and their varying decor.

We decided we’d done enough public transport and so we tracked back to the area close to Stockmann, and headed for the newly opened Amos Rex to see what was going on there. Certainly when we’d passed by on Sunday the queue had been out of the doors and round the block, which suggested it was very popular, whatever was going on there.

Even on a Monday in early December there was a relatively long and slow moving queue, so we joined on the end of it, and eventually got our tickets (once again included in the Helsinki Card) and then headed over to the cafe on the other side of the plaza behind the Lasipalatsi building to grab coffee and a pastry before we pitched in to see what was going on that meant everyone in Helsinki seemed to want to gain access.

Even on a Monday in early December there was a relatively long and slow moving queue, so we joined on the end of it, and eventually got our tickets (once again included in the Helsinki Card) and then headed over to the cafe on the other side of the plaza behind the Lasipalatsi building to grab coffee and a pastry before we pitched in to see what was going on that meant everyone in Helsinki seemed to want to gain access.

The Amos Rex itself, is a massive underground exhibition space, with five conical domes that let in light from the square above. A small Christmas market has sprung up around the odd periscope-like extrusions, and it’s all splendidly odd! It’s also rather remarkable that the building itself, which was supposed to be temporary when it was built at the end of the 1930, is still there and has not been torn down. It probably would have been in London, even with an art deco cinema inside.

And inside it’s brilliant! This is just the foyer!

The first exhibition in this massive space is by the Japan-based art collective teamLab and is called “Massless“. The whole is divided into several areas, containing “immersive and interactive installations”. The first room we went into was labelled “Black Waves“ and I found it incredibly relaxing, almost hypnotic as waves crashed up and down the walls, swelling and then falling back again. I could have sat in there for quite some time and in fact we did.

Next we found ourselves in “Graffiti Nature: Lost, Immersed and Reborn“, where crocodiles, flowers, butterflies, frogs, whales and all sorts of creatures glide across the floors and walls, responding to touch, and to visitors stepping on them. It was fascinating, and fun, and also very difficult to find your way out of the room and into any of the others. I did walk smack into one of the mirrored walls at one point!

We next found ourselves, somewhat surprisingly, in the Sigurd Frosterus collection, which was a conventional gallery setting, the walls lined with Impressionist works. It was all rather incongruous given what had gone before.

It took us a while to find our way from there to the next part of the exhibition, the so-called “Vortex of Light Particles“, where a stream of white and blue patterns vanish into one of the street level portals. A ring of giant bean bags enabled visitors to lie down and stare upwards at the ceiling, and again it was all incredibly absorbing.

From here we once again found ourselves queuing to get into the next part of the work, “Crows are Chased and the Chasing Crows are Destined to be Chased as well, Transcending Space“ which is a very wordy title for something that lasts just under 5 minutes. Eventually we made it into the ante-room where we had to wait for the previous viewers to emerge. While we were there it was suggested to us that if we suffered from migraines or epilepsy we might want to give this part a miss. Looking at the groups staggering out there was a brief moment when we both wondered just how much of a sensory rollercoaster it was going to be, because they looked more than slightly disoriented. It was actually a swirling maelstrom of three-legged crows (apparently lucky in Japanese mythology) that eventually burst into a mass of chrysanthemums, and I was glad I’d chosen to sit down on the floor when we went in. We walked out very steadily as a result.

Sadly the Bio Rex cinema was closed to the public for a private function, so, as we were running out of time anyway, we caught the tram back down to the Old Market Hall for a final mooch around and a late lunch. After a wander round all the aisles we finally decided that actually what was needed was a bowl of salmon or fish soup. The small seating area at E. Eriksson’s looked welcoming and so we sat down and ordered. What arrived was a massive bowl of salmon and whitefish soup, dotted with potato and carrot chunks, and shot through with dill and creamy stock. It was very filling, and along with the rye bread that came with it meant we wouldn’t need much else to eat for the rest of the day. They claim it’s the best fish soup in Helsinki. It may be; even if it isn’t, it’s got to be one of the best at the very least.

For dessert, we nipped back to Robert’s Coffee to have a hazelnut latte, and then returned to the hotel to be reunited with our luggage and await our driver, who arrived bang on time and whisked us to the airport with plenty of time before our flight. 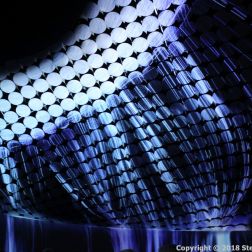 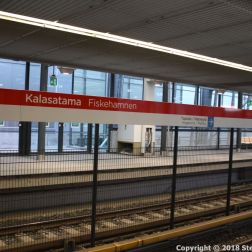 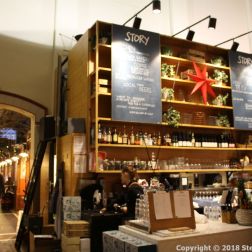 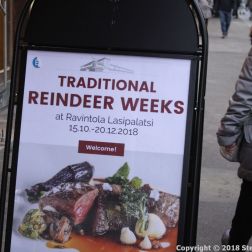 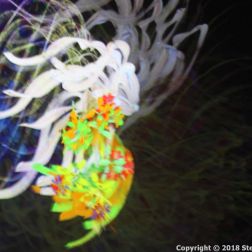 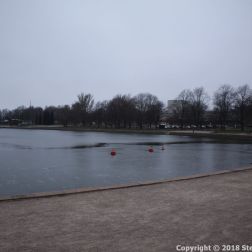 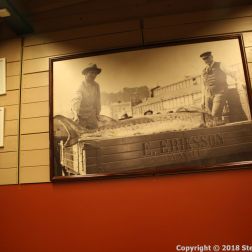 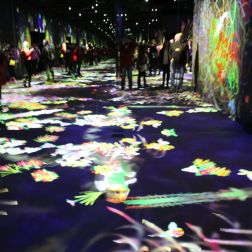 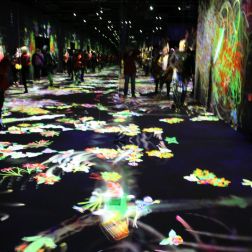 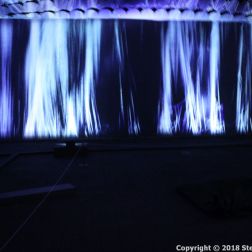 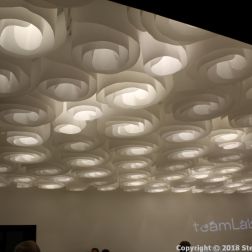 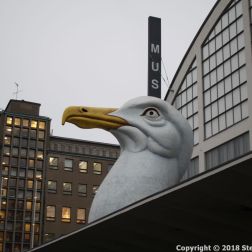 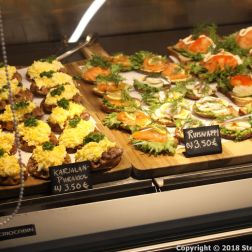 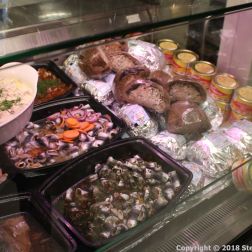 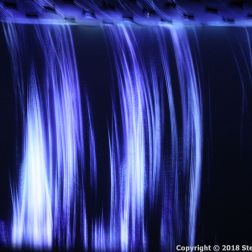 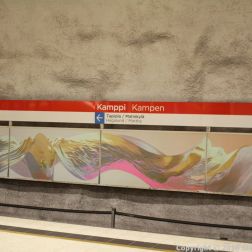 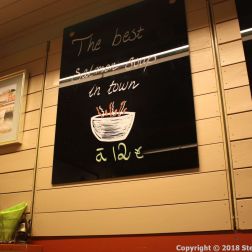 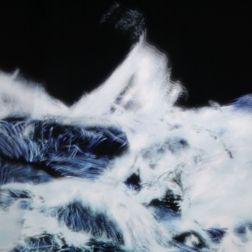 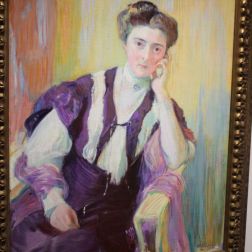 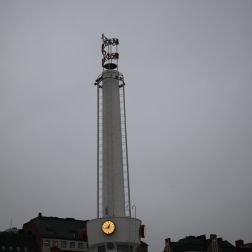 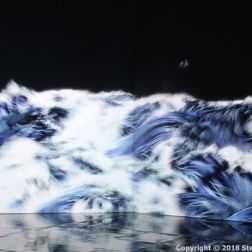 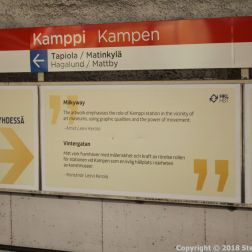 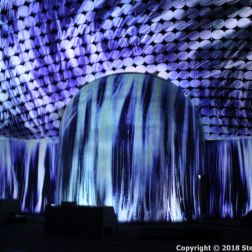