Sanchez has been open since the end of 2017 and there’s been so much buzz around the place that I realised I needed to get there. Arriving in Copenhagen on my own with no colleagues in tow, I had the choice of going wherever I chose for dinner on my first night in town. The following night was scheduled to be a group dinner in the canteen at work, which would be fine, but wasn’t going to make inroads into my food memories.

And so I booked a seat at the bar in Sanchez and found I had one of the best seats in the house, overlooking the kitchen. It didn’t take me long to establish that the kitchen here is very collaborative, and very female (apparently around 70% of the kitchen staff are women, and 70% of front of house are men, the complete reverse of many places).

Anyway, I was soon settled at the bar and had a glass of water, a bowl of nacho chips and some dips to dunk them in. They were very moreish and I kept trying to stop myself from eating my way through all of them before I even got a look at the menu. By the way, you’ll have to excuse the quality of the photos as I forgot to take either my camera or my work iPhone and has to use my antediluvian Nokia to record what was being put in front of me! 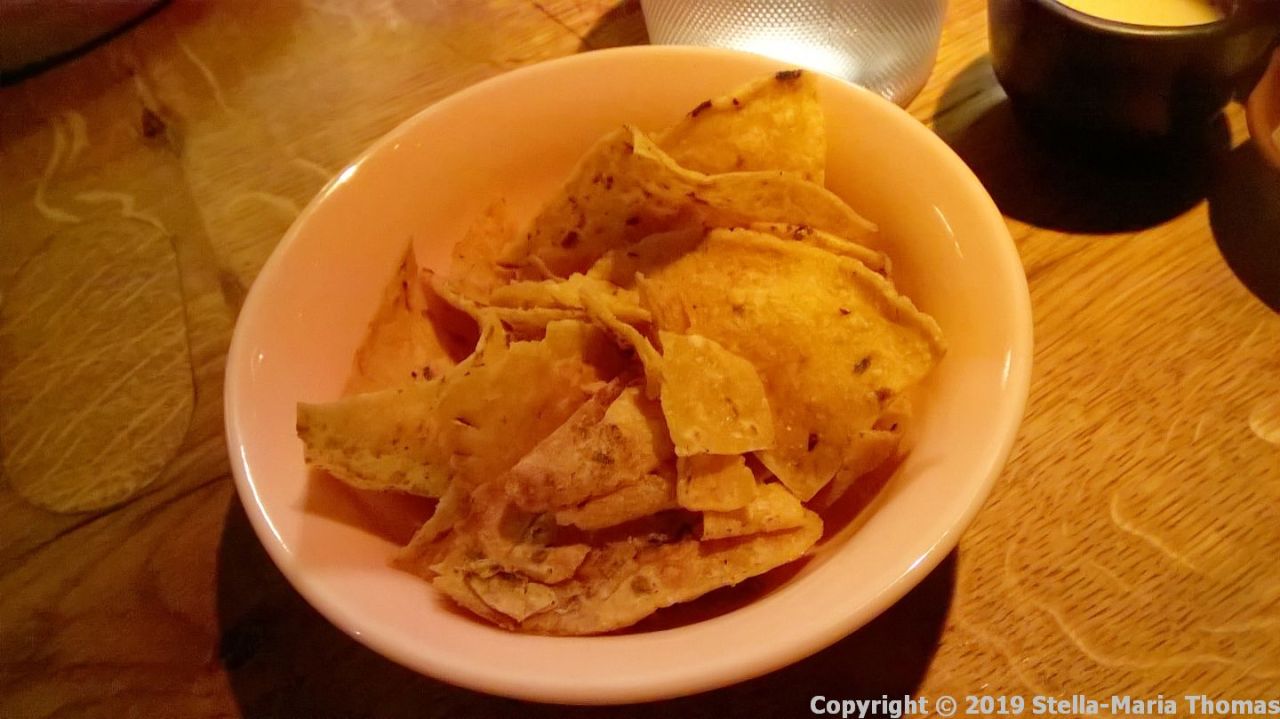 The dips were an interesting contrast, with a lovely mild mayo and a very fierce chili mix, which I treated with the respect it deserved after the initial bite! 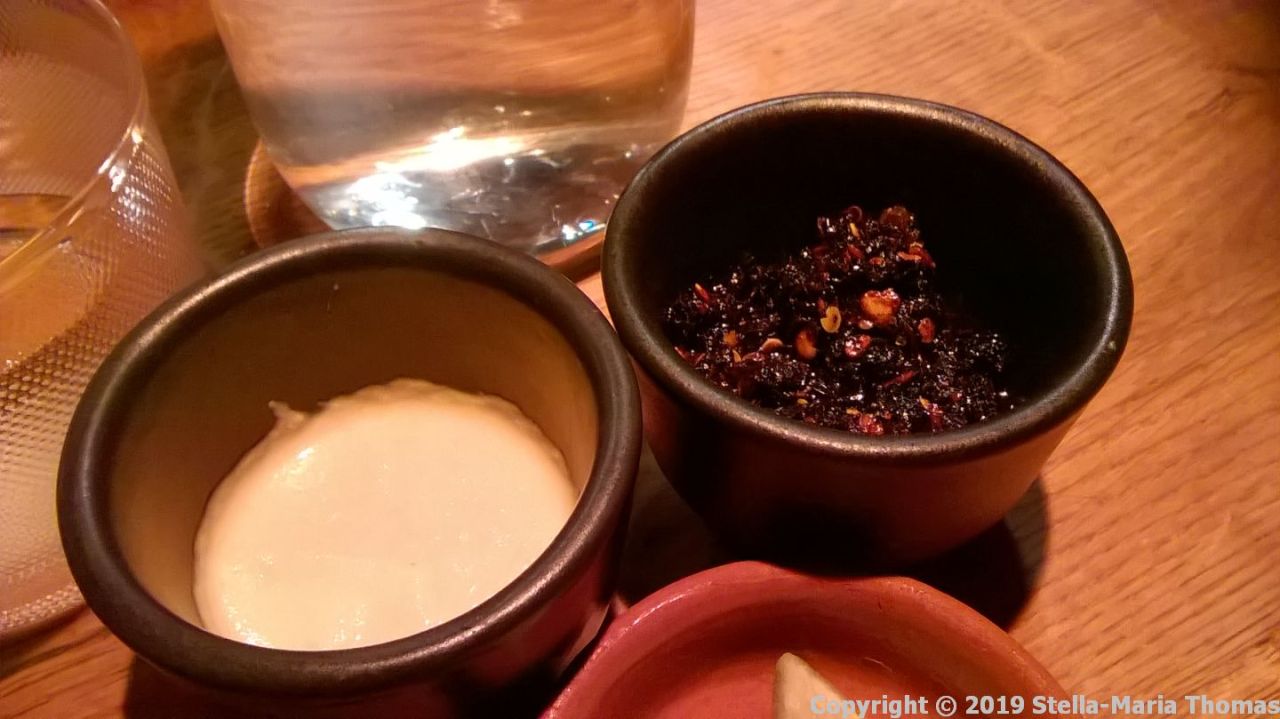 I studied the menu and had a think and then decided I would go with their tasting menu. listed as five favourite servings selected daily by the kitchen and charged at a pretty reasonable (for Copenhagen anyway) 385 DKR. I was also happy to go with the drinks pairing at 250 DKR, which meant I would get four favourites selected by the team, and that it would include seasonal selections of spirits, beer, wine, cocktails  and aguas frescas.

First up was a snack of a crispy taco and some chipotle mayonnaise (which was lovely). I broke the taco into little pieces and dunked it in the mayo, making sure I didn’t leave any of the spicy mix behind and was thoroughly enjoying my first few bites of dinner.

My first drink also showed up, a Mexican brewed beer that had lime leaves infused in it. Beyond that I have no information, sadly, because it was very refreshing, with a nicely tart edge to it.

The first of the five dishes was brought next, a soup poured onto Thai sticky rice and some tiny shrimp. It was almost sweet sour in flavour, and the rice bulked it out, while the prawns simply absorbed the flavour of the broth. It packed quite a punch too, with rather more heat than I’d initially expected, this was one of those dishes where the heat creeps up on you in installments rather than hitting you all at once.

The soup was followed by a wonderful empanada, stuffed with Feta cheese, and garnished with a creamy dressing and shredded lettuce. I was instructed that I must use my hands to eat this, so I did as I was told. It was very good indeed if somewhat messy, and I found myself chasing bits of cheese around the plate to make sure I didn’t miss anything.

Next up was a cocktail that I didn’t get the full details of. It did have chocolate dusted over the top though, and contained bitters, because it was meant to go with the next dish and the mole sauce it would include.

Now I’ve head of mole sauce, obviously, but hadn’t had it before. Proper Mexican food is not easy to come by in the UK, apart from in London, but my take on it is if people in country X enjoy food Y then there’s no reason why I won’t. The mole sauce was more bitter than I’d expected, with a chili punch to it, and it went well with the softly baked pear it was draped over. It also went well with the small taco that accompanied it and that I was recommended to use to mop up the mole. I did just that – I wasn’t wasting any of the sauce. 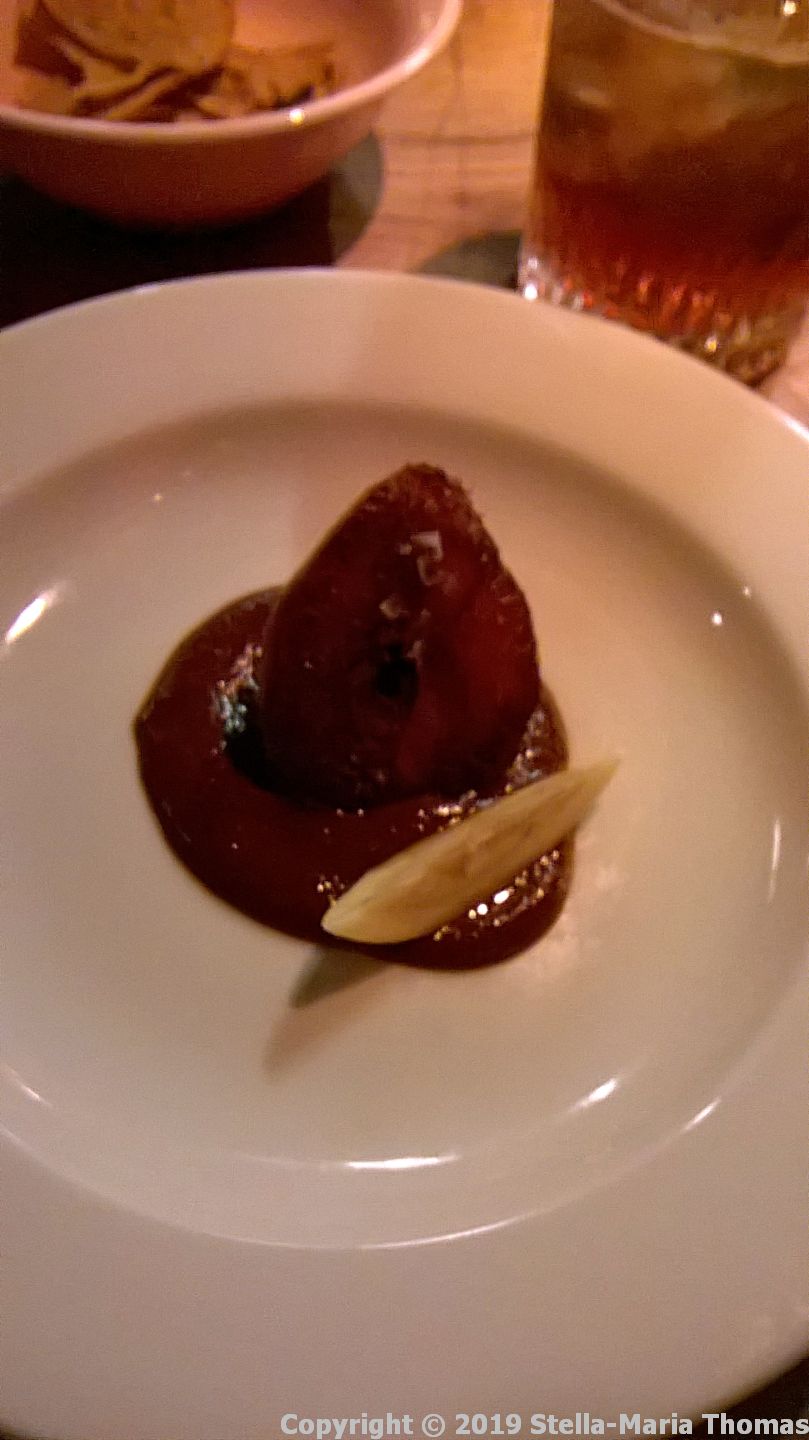 The taco was soft and lovely and warm and arrived in a basket.

Having cleaned up that, it was on to a glass of orange wine from Georgia (possibly Pheasant’s Tears Rkatsiteli). I do know it was fermented naturally in clay qvevri which are buried underground. It’s described as “a golden amber in the glass with a nose of spiced wild honey. Dry and unexpectedly full-bodied in the mouth, with background notes of walnut and apricot on the palate.” I’m not about to argue with that description or the suggestion that it has a nutty tang.

This was to go with a mushroom parcel, a filling wrapped in a soft dough, and steamed inside a banana leaf. It was delicious, soft, intensely mushroomy if that is even a word.

It was accompanied by a salsa of chili and gooseberry, and a small bowl of thick cream, both of which were to be spread across the parcel. It was fabulous and I could have happily eaten several servings of it, although I was starting to fill up somewhat! 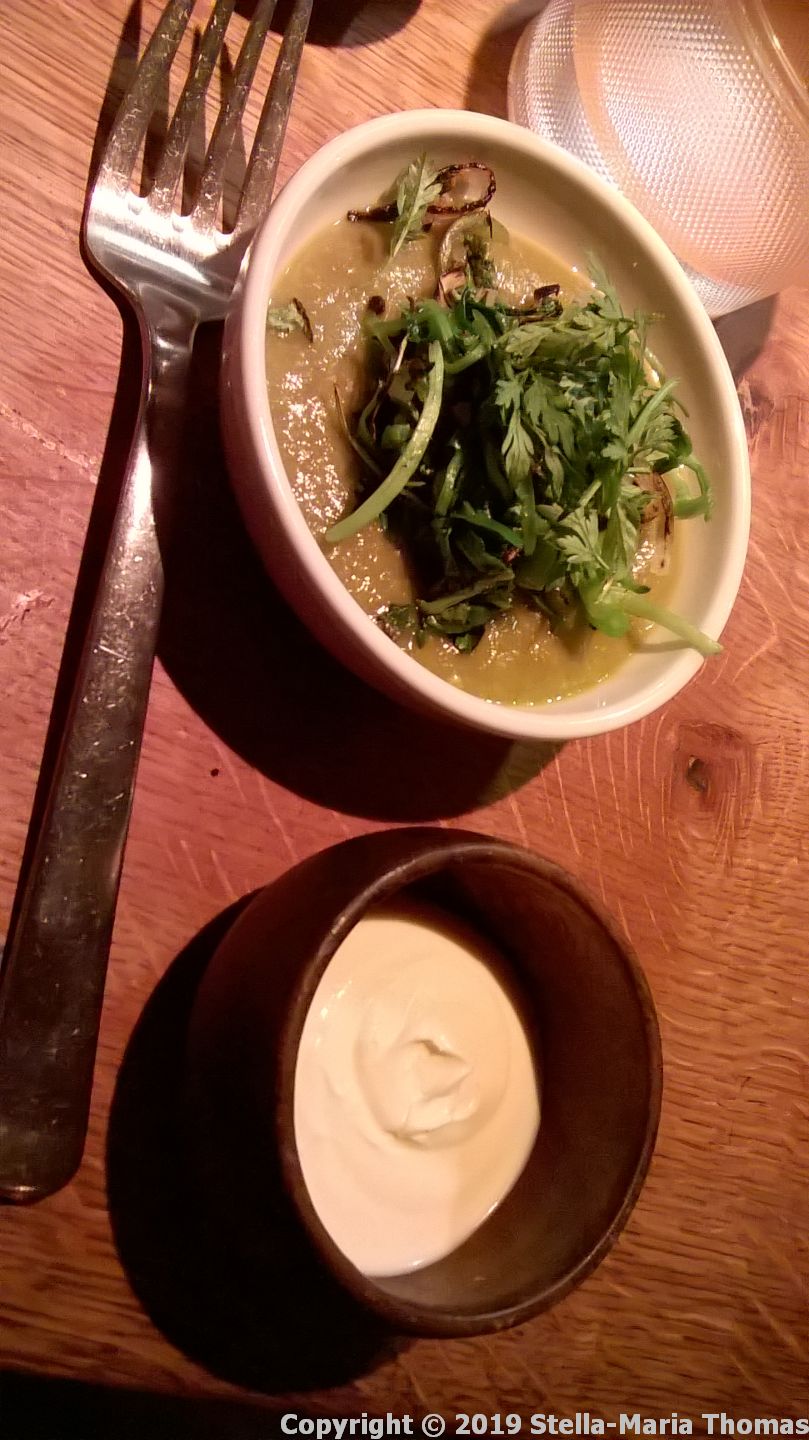 I had one more dish left and I was really looking forward to it. I had no idea what it was going to be, but I’d been watching the kitchen in action, and between the good humoured exchanges going on between the three women working in there, and the waiters’ teasing of each other, some very good looking dishes had been leaving the kitchen.

First however I needed another glass of wine, this time a red, a nebbiolo from Mexico. It was tannic, had obviously spent time in oak, and was fruity and big.

The dish to go with it was another hand held taco, but the taco shell was a flattened disk of dark green cabbage leaf, all crinkly and briefly fried on the griddle, topped with steak chopped small and seasoned beautifully, cooked till it was crisp on the outside and mixed in with softly cooked onions. It was messy to eat, and I ended up having to use my fingers to catch the last bits of meat and onion.

And that was the tasting menu done. Did I want a dessert, they asked. I wasn’t sure I needed one, but I had seen the desserts being prepped and sent out, and one in particular had caught my eye. A churro was dipped in sugar, topped with a disk of parfait, and then had cream placed in top. It looked simple, but intriguing. It was just a gloriously comforting thing, with a crunchy crust to the churro but a soft fluffy inside, and a mezcal hit from the parfait. 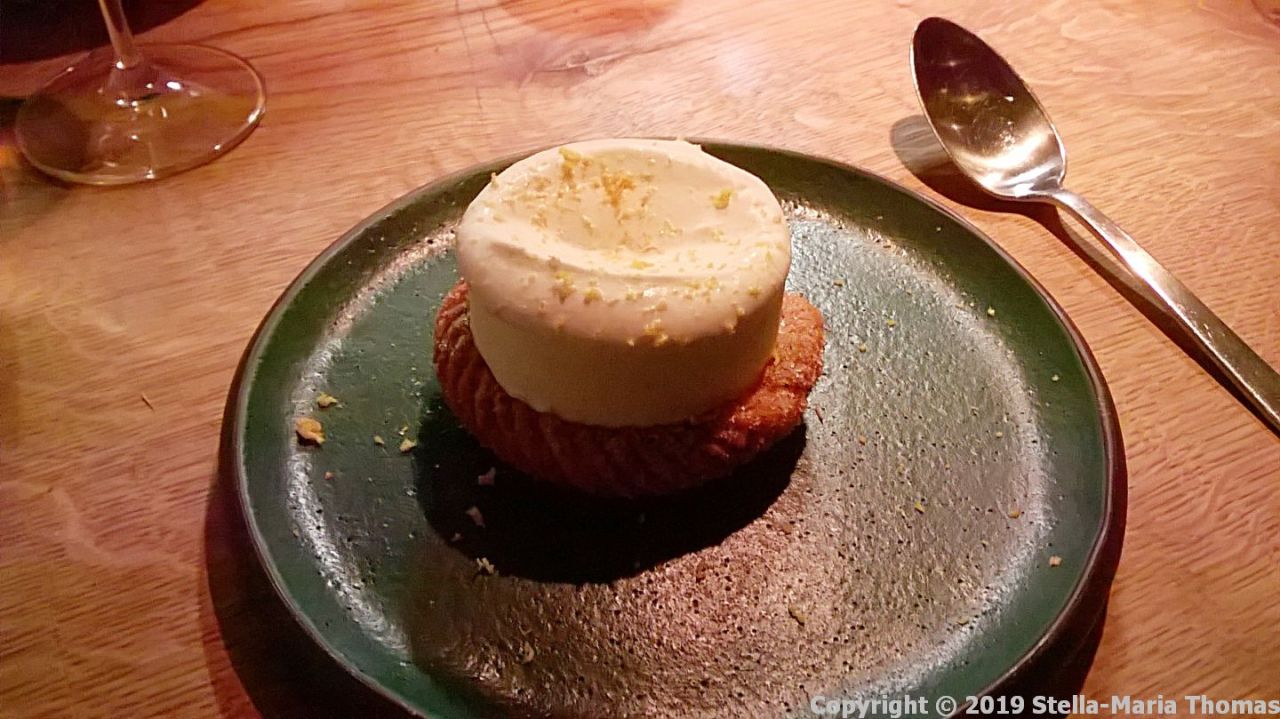 It also went well with a second glass of the orange wine.

I left happy, feeling I’d been well looked after and well fed, and I’ll certainly be going back if I can, because for one thing there’s a lamb barbacoa dish I think I really have to try. 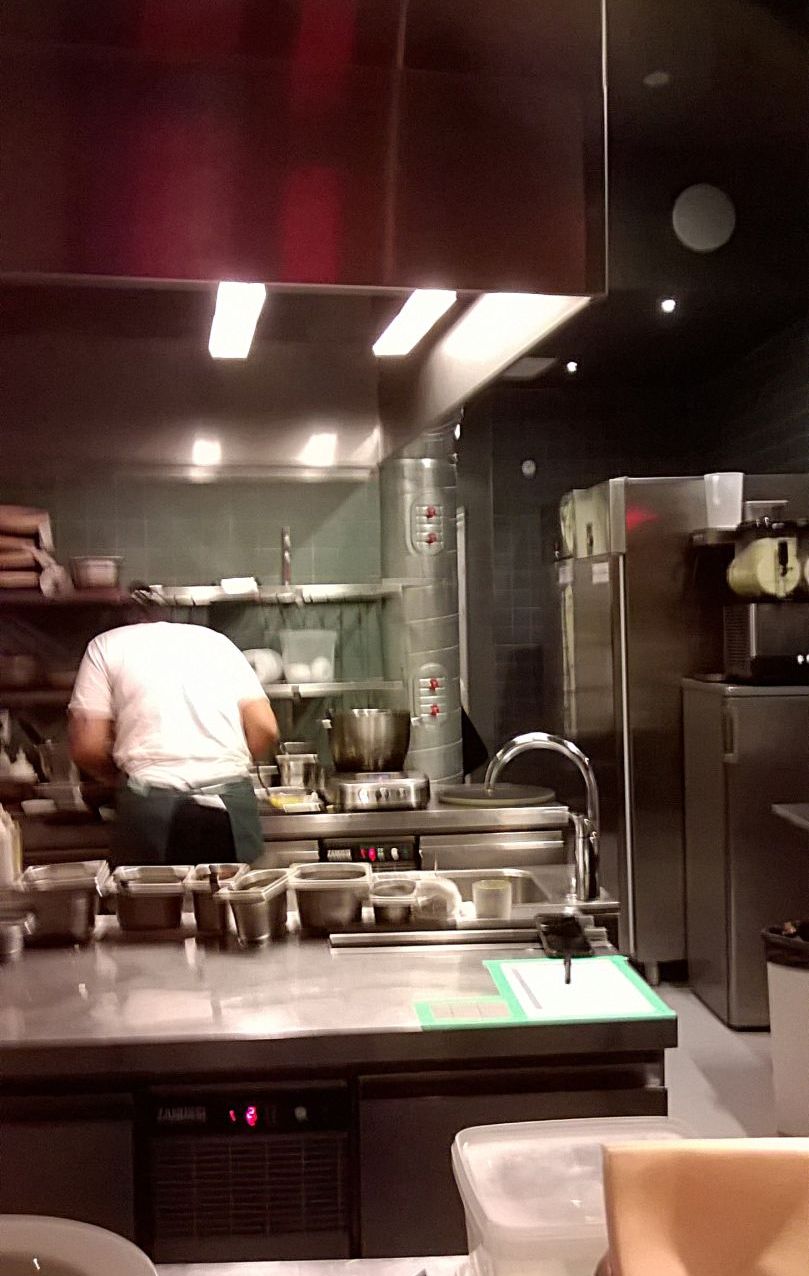 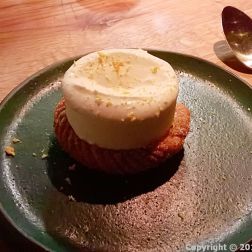 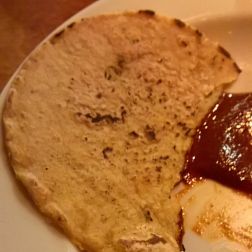 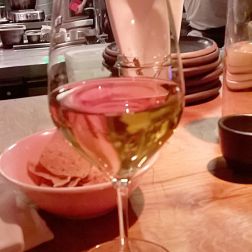 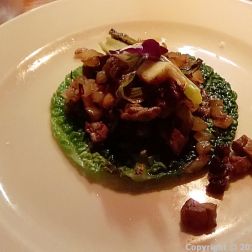 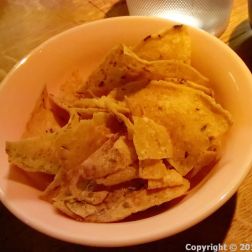 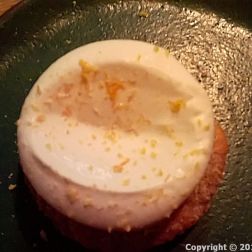 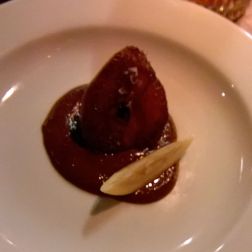 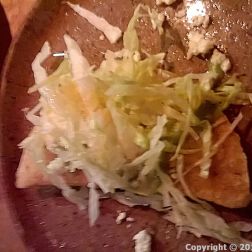 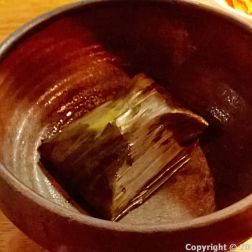