This is now a slightly cautionary tale. Because the guy on the front desk at the hotel when we checked in insisted that we had dinner included for all three nights, despite me saying we didn’t, I believed him in the end, and cancelled a reservation at l’Atelier de Peintre which I’d been looking forward to. When it turned out I was right, it was too late to get a table there or anywhere else I was particularly keen on. After checking Gault-Millau I finally wound up getting a table at La Maison Rouge which was rather more prosaic than some of the restaurants we’d hit so far. Still, it wasn’t all bad, just not what I’d been hoping for. But more of that later. 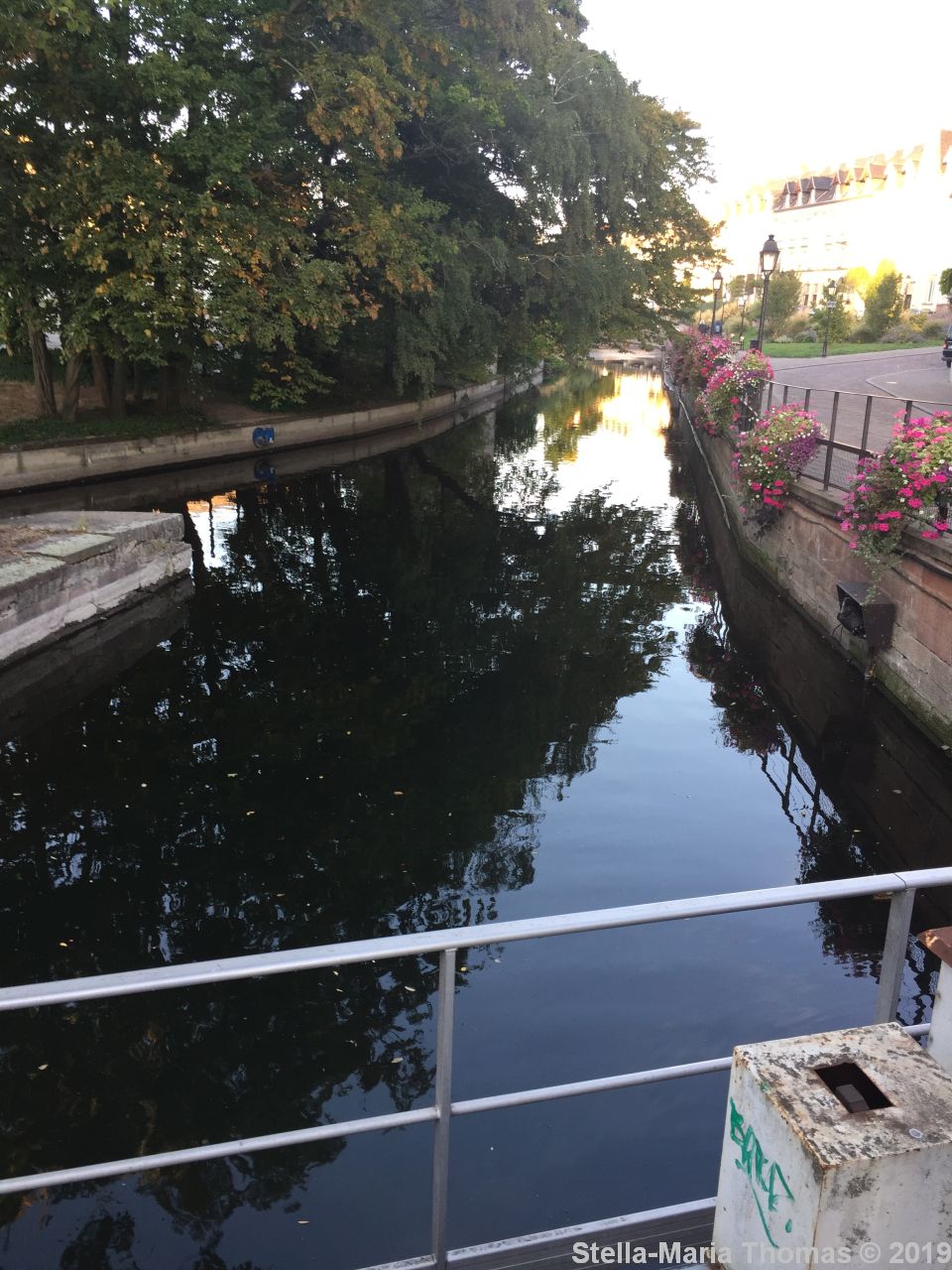 We took a short walk before dinner, stopping for a glass of wine at a small bar that had tables out on the pavement. At dusk Colmar was particularly lovely, as well as a lot less crowded with tourists taking selfies. It may be just me, but I don’t understand the selfie thing. Your friends all know what you look like; they don’t necessarily know what the place you are visiting looks like… but what they get is a photo of you, your face distorted by the lens, and a blurry background that might not even be real. Here’s a photo of Colmar without my face…

We reached the restaurant in good time, and were soon seated with a glass of rosé crémant and a small bowl of tiny bretzels. I felt the room was overly bright, but otherwise it was a welcoming space, and the staff were friendly and helpful. 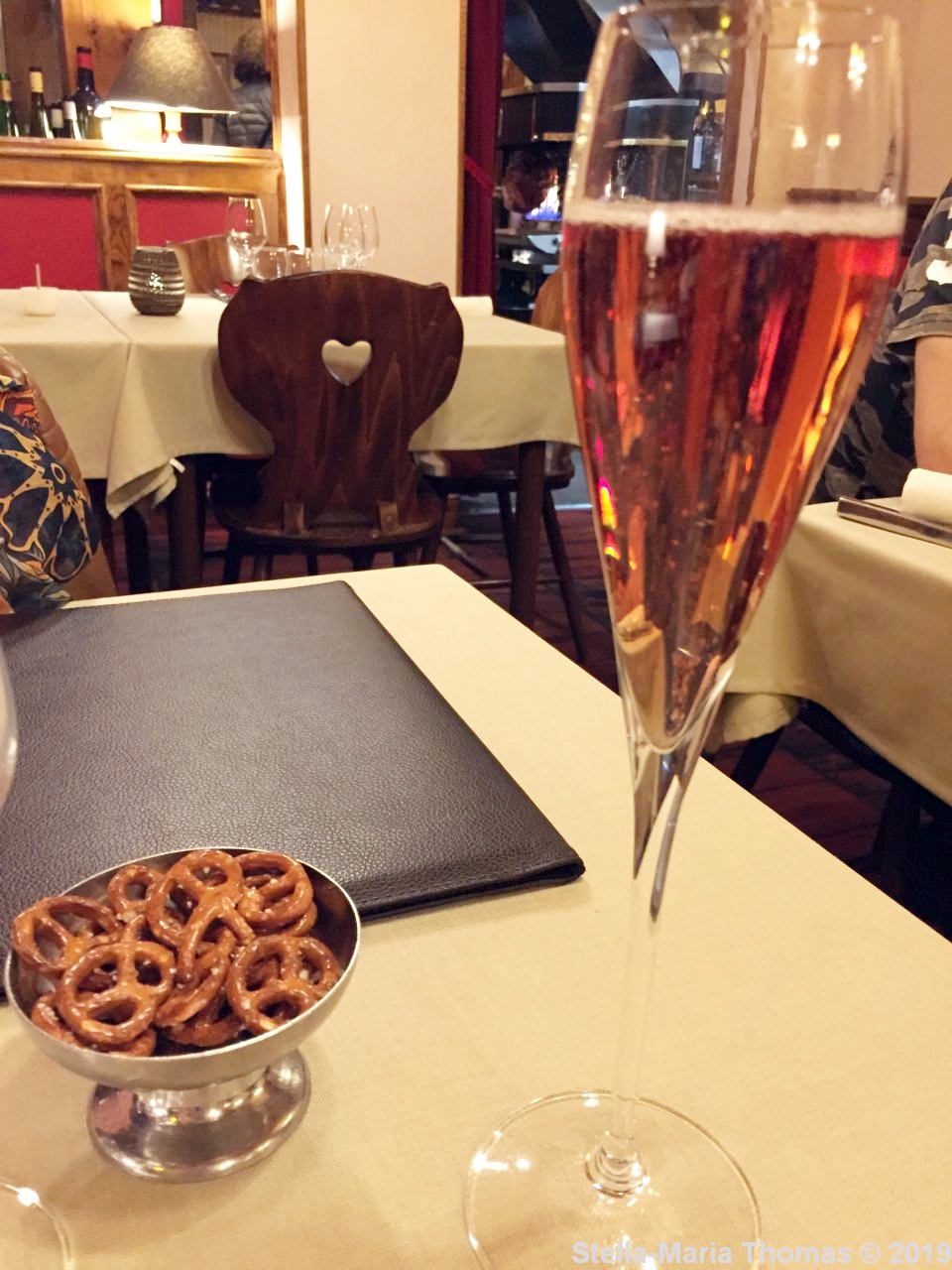 After a study of the menu we opted for sharing our starters, with an order of duck and goose foie gras terrine… 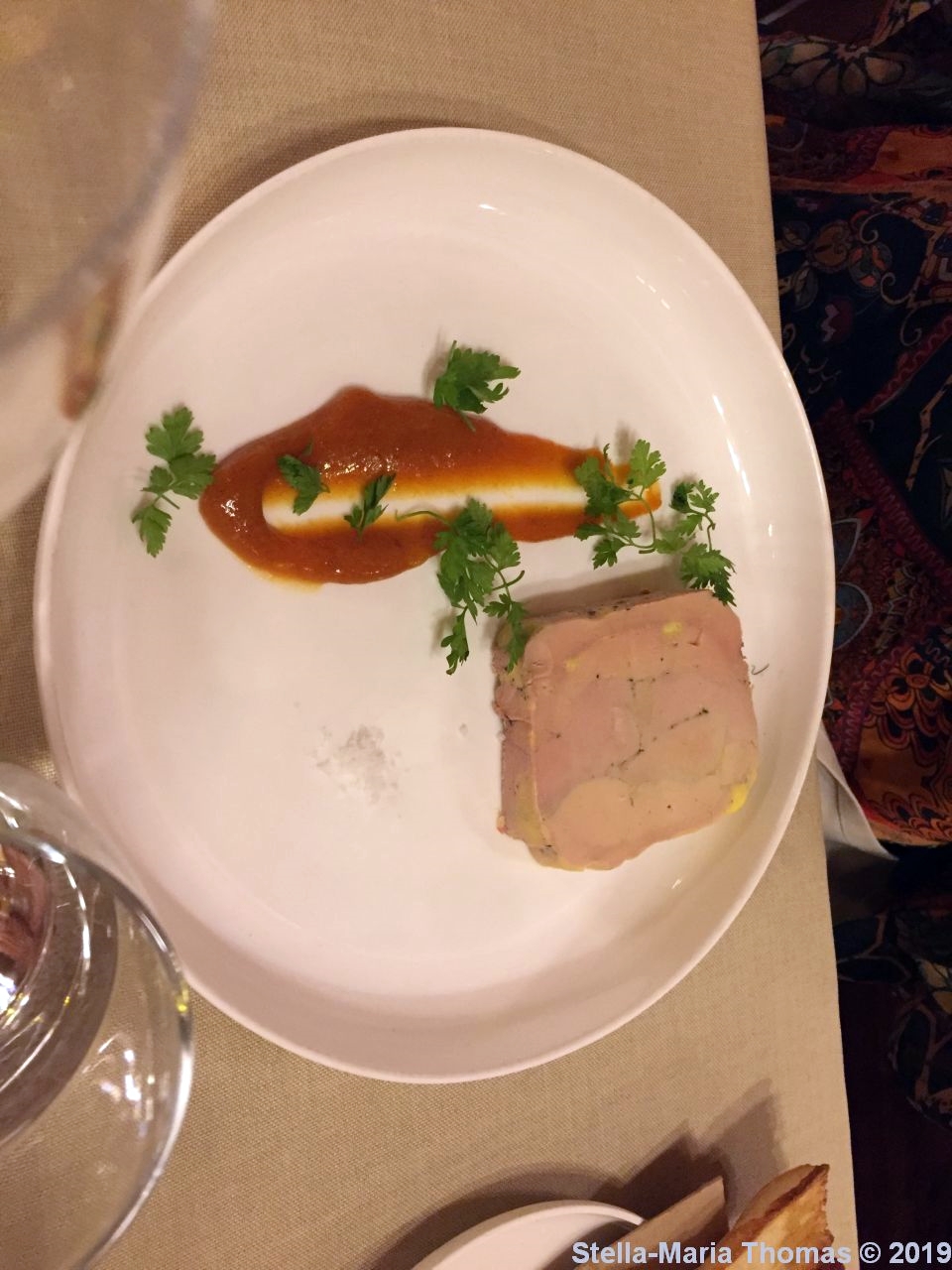 And another of carpaccio of red Carabinéros prawns. These were both very good, the terrine being just what you’d expect given the components, and the prawns being tender and delicate, with just the right sea-salt hit. 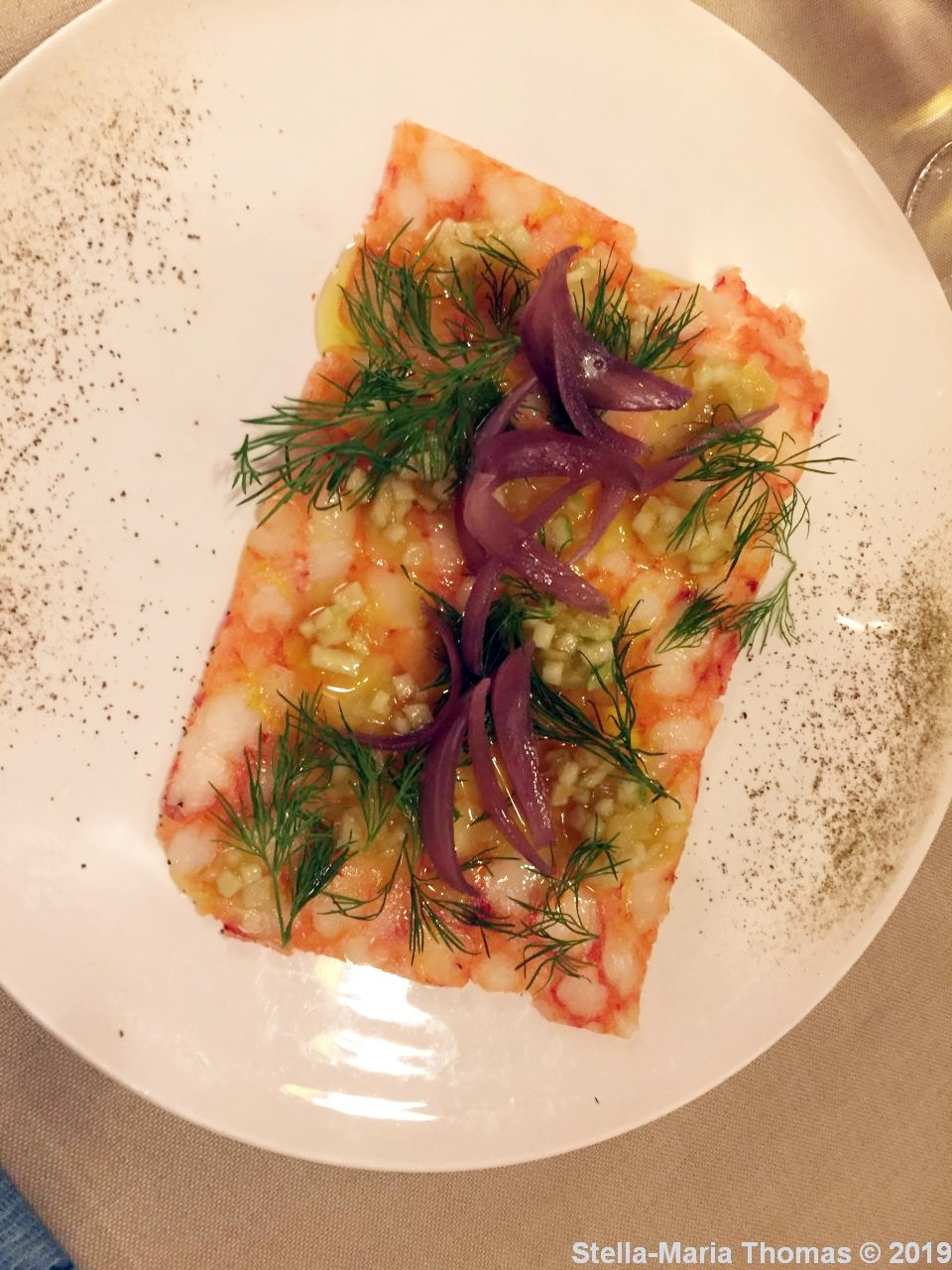 The sommelier was needed to assist us because the wine list was more of a bible and picking the right option was not going to be easy, at least not during the course of a single meal. We ended up starting with a 2010 Grand Cru Brand Riesling from the Cave de Turckheim. It’s produced from grapes grown on a granite slope overlooking the medieval town of Turckheim and enjoys an amazing amount of sunshine. According to legend, it was here that a battle took place between a dragon and the sun though what effect that has on the wine is anyone’s guess! These wines are distinguished by their great elegance, balance and finesse, though the wine maker’s description of the 2017 vintage is a bit strange: “citrus, grapefruit and pineapple flavours. Nervous, dry, long and elegant, very well balanced”. What does “nervous” even mean in this context? It went well with the starters though. 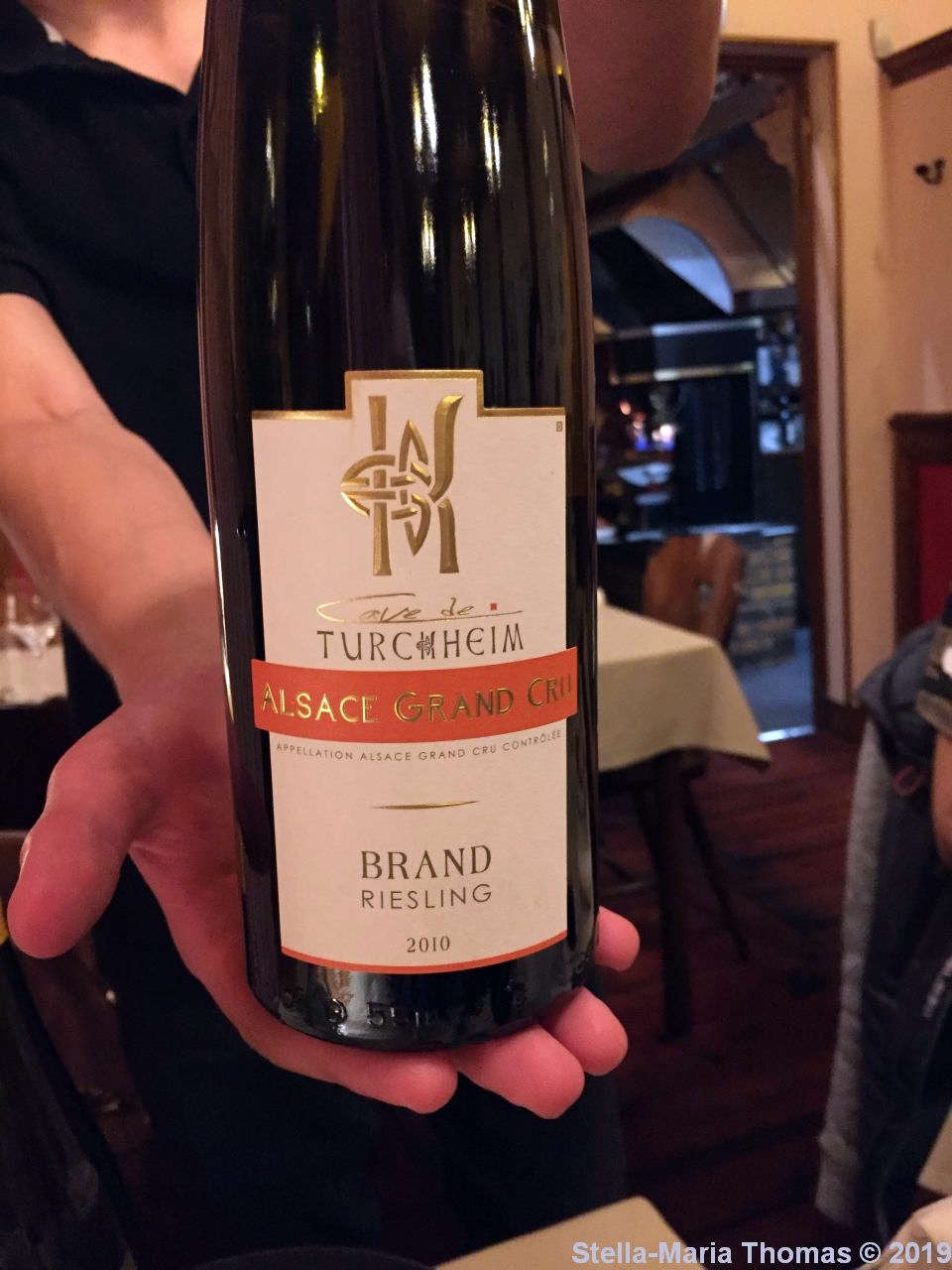 I decided I really needed to have choucroute at some stage, so I went for it. It might not have been my smartest choice, but the locals seem to think that fish goes with sauerkraut so I ordered it. I’m not convinced. The elements separately were fine, the choucroute just right in terms of seasoning, the fish cooked nicely, but it just didn’t go together for my tastes. It was also far too big. I ate the fish separately, and then a potato or two to cleanse my palate and let me actually enjoy the cabbage. 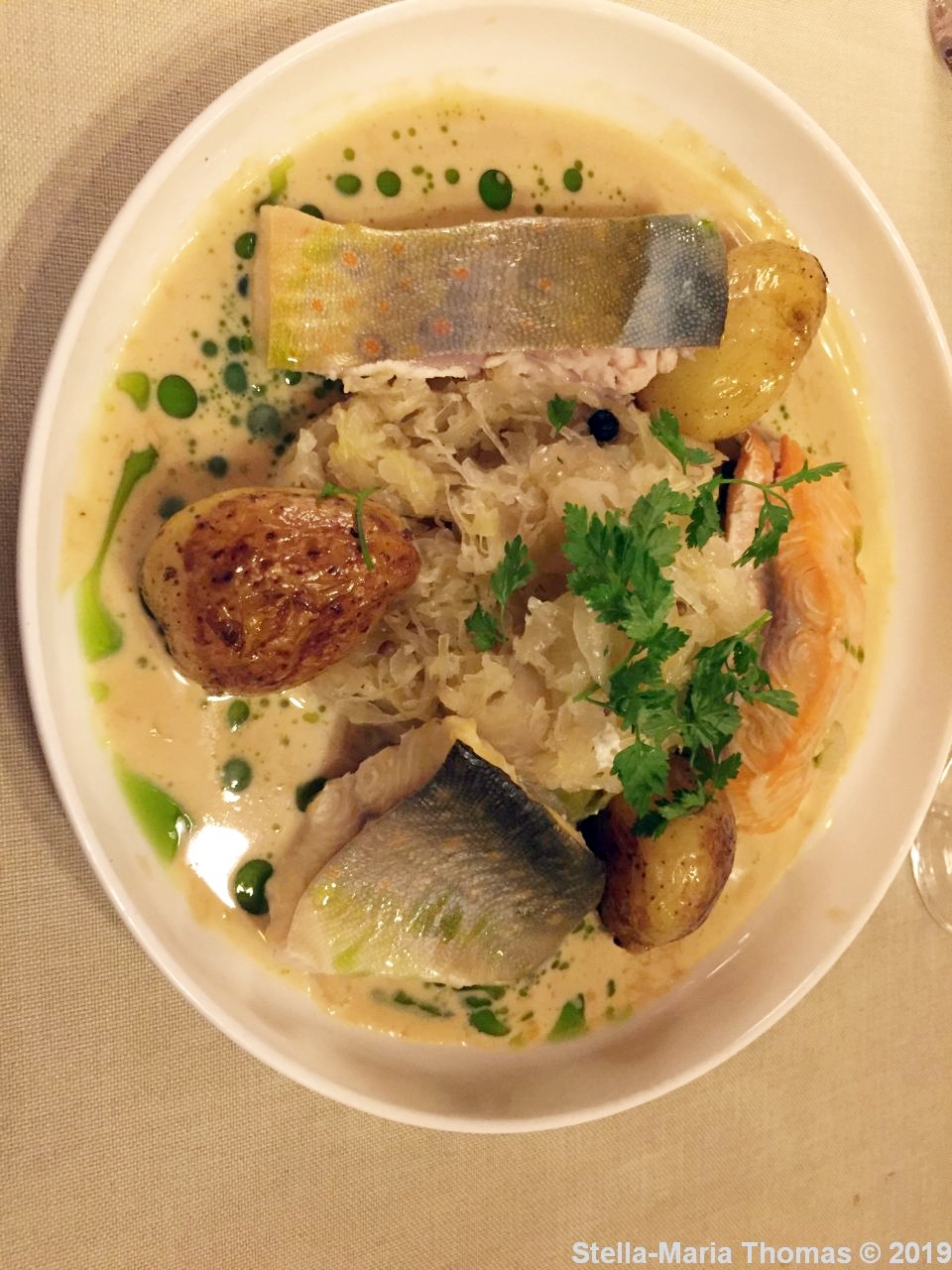 Lynne ordered fish as well and got a beautifully cooked piece of sea bream in a lovely, delicate sauce, with a separate puree of celeriac. I really should have done the same. 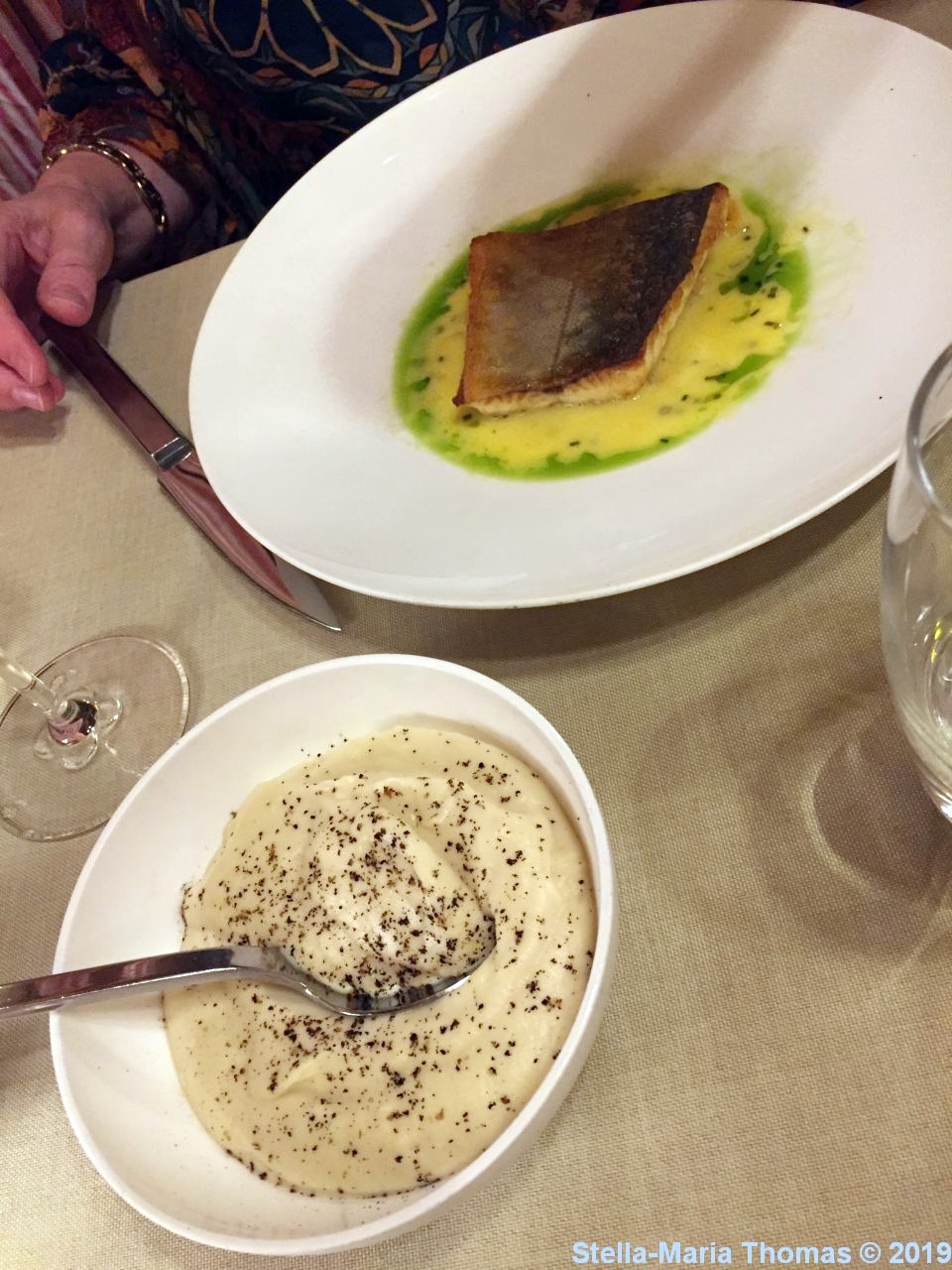 We drank a 2017 Gewurztraminer from Domain Albert Mann from Wettolsheim and Kientzheim, grown on marly-limestone. It’s a lovely light yellow colour with golden highlights. The bouquet is powerful and complex, an explosion of exotic fruits, flowers and spices and it really worked. We were much impressed with the sommelier and his recommendations. We finished the wine in place of dessert as neither of us could eat another thing. It was that German-sized portions thing again…

We took a slow walk back to the hotel along the Lauch, stopping  to enjoy the reflections in the water. 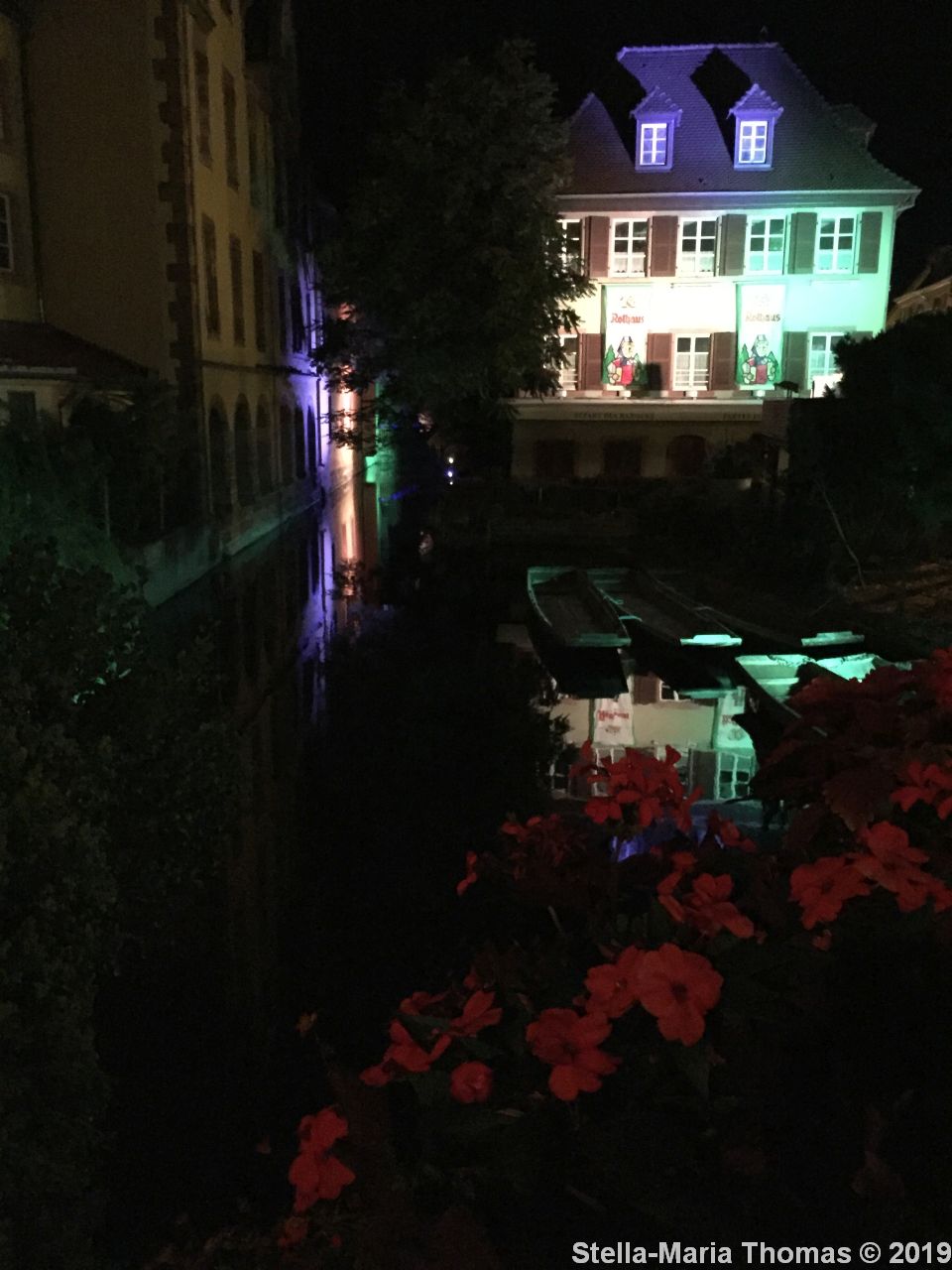 It hadn’t been a bad dinner, and in fact it was way better than it could have been. On arriving back at the hotel we ordered a final glass of wine, a 2015 Gewurztraminer Vendanges Tardives from Pierre Henri Ginglinger, and retired to bed. Tomorrow we would be moving on to Mulhouse, stopping off in one or two of the wine route towns on the way. 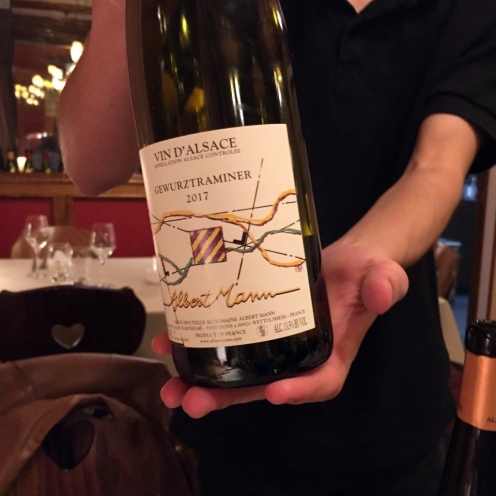 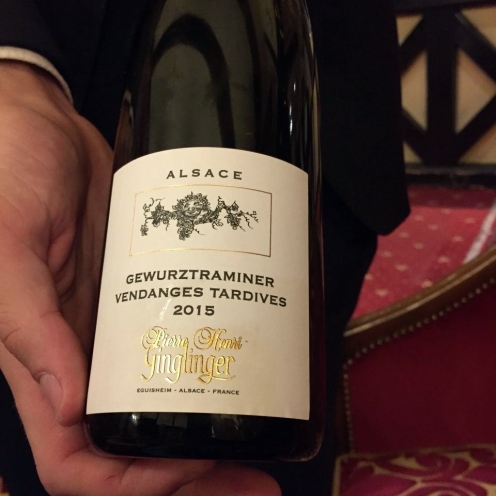 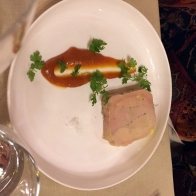 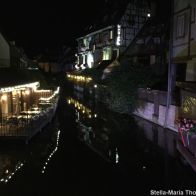 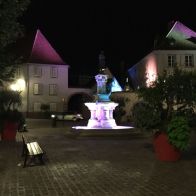 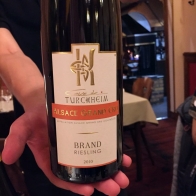 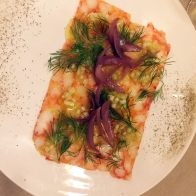 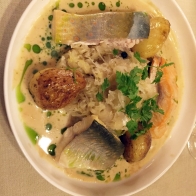 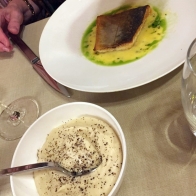 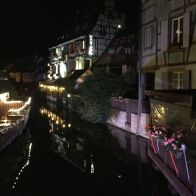 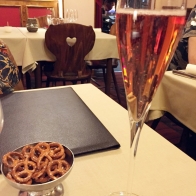 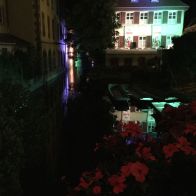