Arriving somewhat later than planned at the Hotel Schlossmühle, we decided our best bet would be to eat in the hotel once we had unpacked and got cleaned up. The hotel dates from the 12th century and has been a mill, a bakery and a variety of other things before the family now running it set up as an hotel three generations back.

Clean, changed and civilised we pottered down to the restaurant to see what they could offer. We started with a glass of sekt as we were once again in the middle of the vineyards, in this instance a Riesling from the Roter Bur vineyards. Very crisp, dry and pleasant, it was a good appetiser for what was to come.

We managed to resist the bread rolls, radishes and butter that we were presented with. We’d seen some big portions over in Alsace, and had every reason to believe that Baden wouldn’t be any more restrained.

And when my goats’ cheese salad starter showed up it was proof that we’d been right to be cautious. At first glance it looked like a pile of greenery with a couple of tomatoes and two pieces of cheese. Digging deeper revealed beetroot, cucumber, sweetcorn, cabbage, mushrooms, peppers and all manner of other dressed and in some instances lightly pickled vegetables. It was excellent, full of interesting textures and flavours, but it was enough to feed a small army!

Lynne’s melon and Black Forest ham wasn’t any smaller. There must have been an entire melon in there and possibly an entire ham! We both struggled to finish what we had, and were very glad we’d avoided the tasting menu (5 courses), while wondering if either of us would be able to eat our mains. The ham was of very good quality and the melon was sweet and perfectly soft.

Fortunately the mains were relatively non-threatening, certainly I’ve seen bigger fish than Lynne’s local trout, served simply and traditionally in butter with slivers of toasted almonds scattered around, and plain boiled potatoes. Trout in the Glotter, which runs past the hotel, must have a good life because this one tasted as if it had! The butter was lovely too and of course the potatoes tasted of something, with buttery flesh and a good texture. Why can’t we get the same sort of potatoes in the UK? 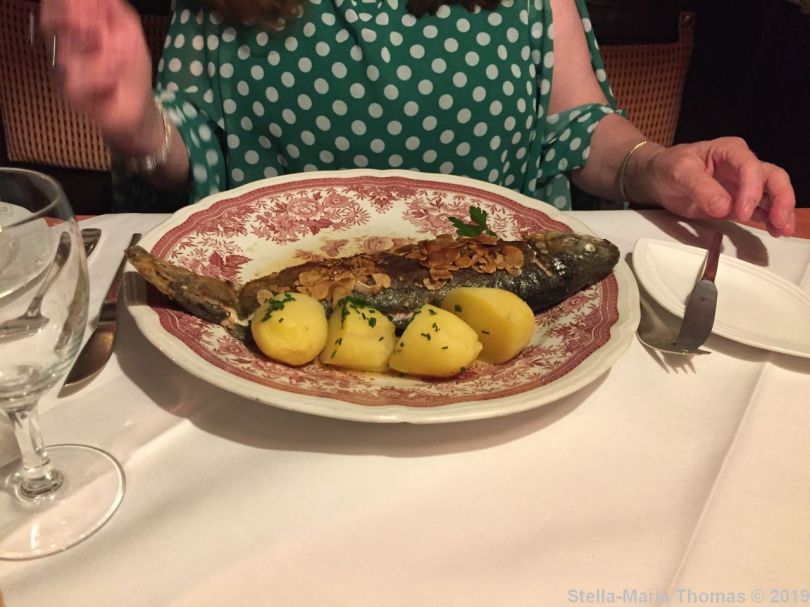 I had beaten a strategic withdrawal from the meat section of the menu, and had in fact gone vegetarian for a change, largely because I don’t believe there can be any such thing as too many mushrooms, especially in autumn. The menu promised me a wild mushroom ragout with bread dumplings and that really hit the spot, especially with a 2015 Glottertäler Eichberg Spätburgunder Rotwein Kabinett, basically a late ripening Pinot Noir, also from the valley. I did only eat one of the dumplings, but the ragout all went. It was rich, autumnal, creamy and perfect for a non-meat option. I may have to try and make something similar myself but it’ll probably require a trip to London and Borough Market to get suitable funghi.

The lovely waiting staff tried to persuade us we needed dessert. We really, really didn’t! Even so, in the face of all protestations, they brought us a plate of petit fours and sweets in case we needed something to nibble on later. I have no idea where they thought we would put it.

We retreated to our suite with the rest of the wine, the plate of sweets and very full stomachs!

We put our feet up for a while and ignored the sweets while our digestive systems got to work. And then it was time to get some sleep. 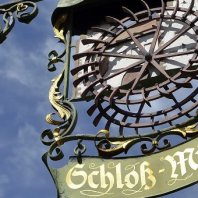 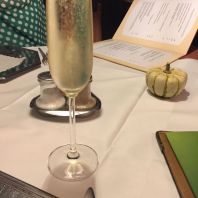