In a fit of possibly misplaced enthusiasm I volunteered for one of the local wine grower’s grape harvest, thinking that ahead of taking the WSET 2 course in January 2020 I should maybe take a look at the wine making process from the sharp end.

Northamptonshire has several vineyards now, some of which I know reasonably well (Fleur Fields Vineyard, Stonyfield Wine), some I don’t, but the Chafor Wine Estate seems to be very active on all fronts and are making an effort to engage locally. One of the things they do, apart from running things like paella evenings, is ask for volunteers to help get the harvest in. On that basis, I figured I’d join in if the dates worked at all.

There was just one day on which I could spare the time, so I duly fetched up at their Gawcott vineyard at around 08:45 on the appointed morning. Stephanie and Tim Chafor, whose business it is, welcomed us and we were briefly shown what we needed to do and how we should remove the fruit from the vines. It wasn’t especially complicated, though it could be a bit of a struggle to get to the right point to clip through the stem and drop the bunches into our buckets. 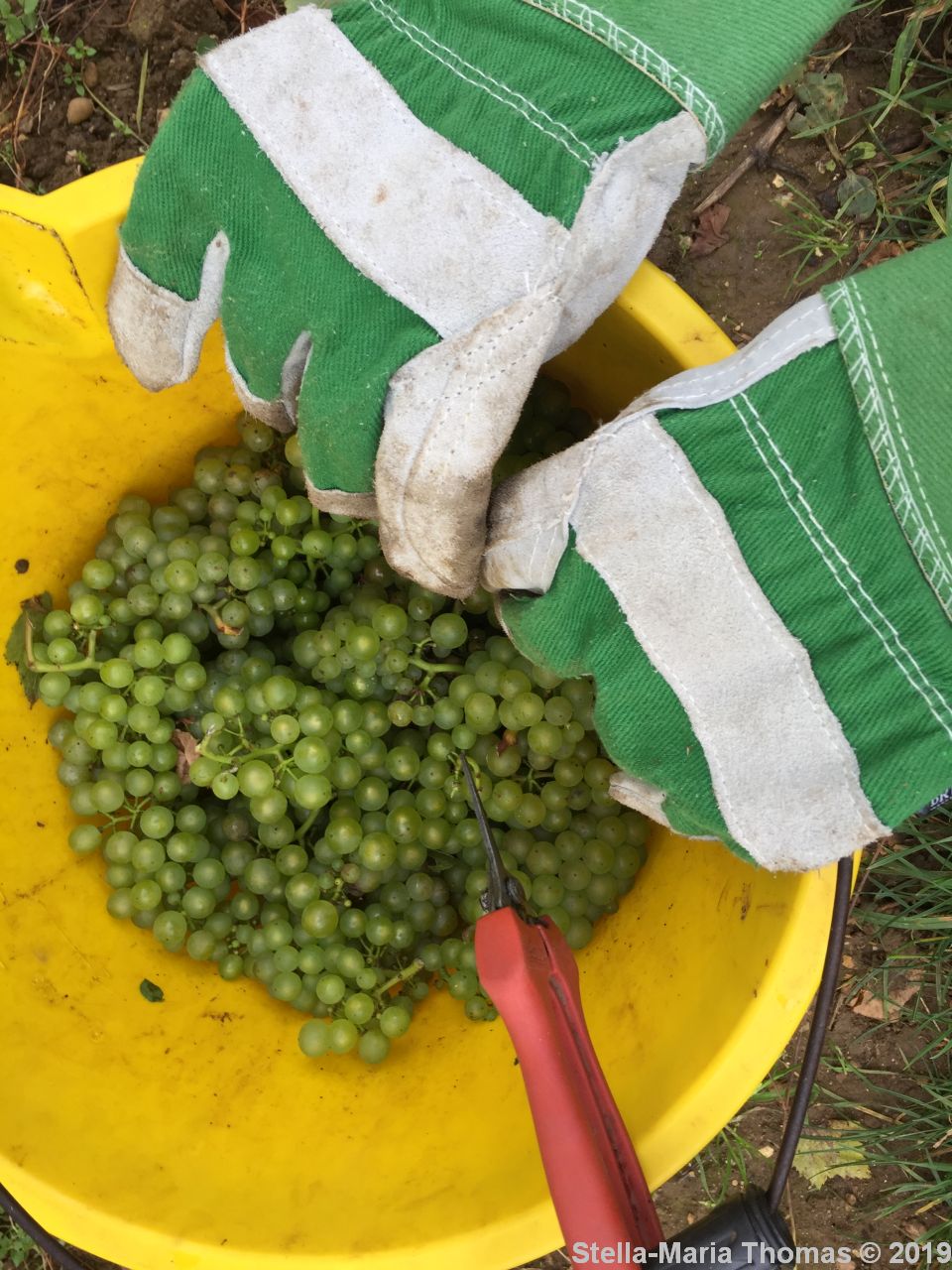 We were issued with buckets, work gloves to stop us getting incredibly sticky, and a pair of secateurs each and were then paired up, so that we could go down either side of a row and in theory anyway not miss any grapes. In my case I was paired with someone who really didn’t understand the first thing about wine making, and who clearly hadn’t retained any of the very brief training we’d had. Working with her was tricky, because she was wasting perfectly good grapes if there was the slightest amount of rot; all she needed to do was what we’d been told to do, which was cut the poor quality bit out and put the rest in the basket… I gave up trying to explain that to her and simply concentrated on my own work. 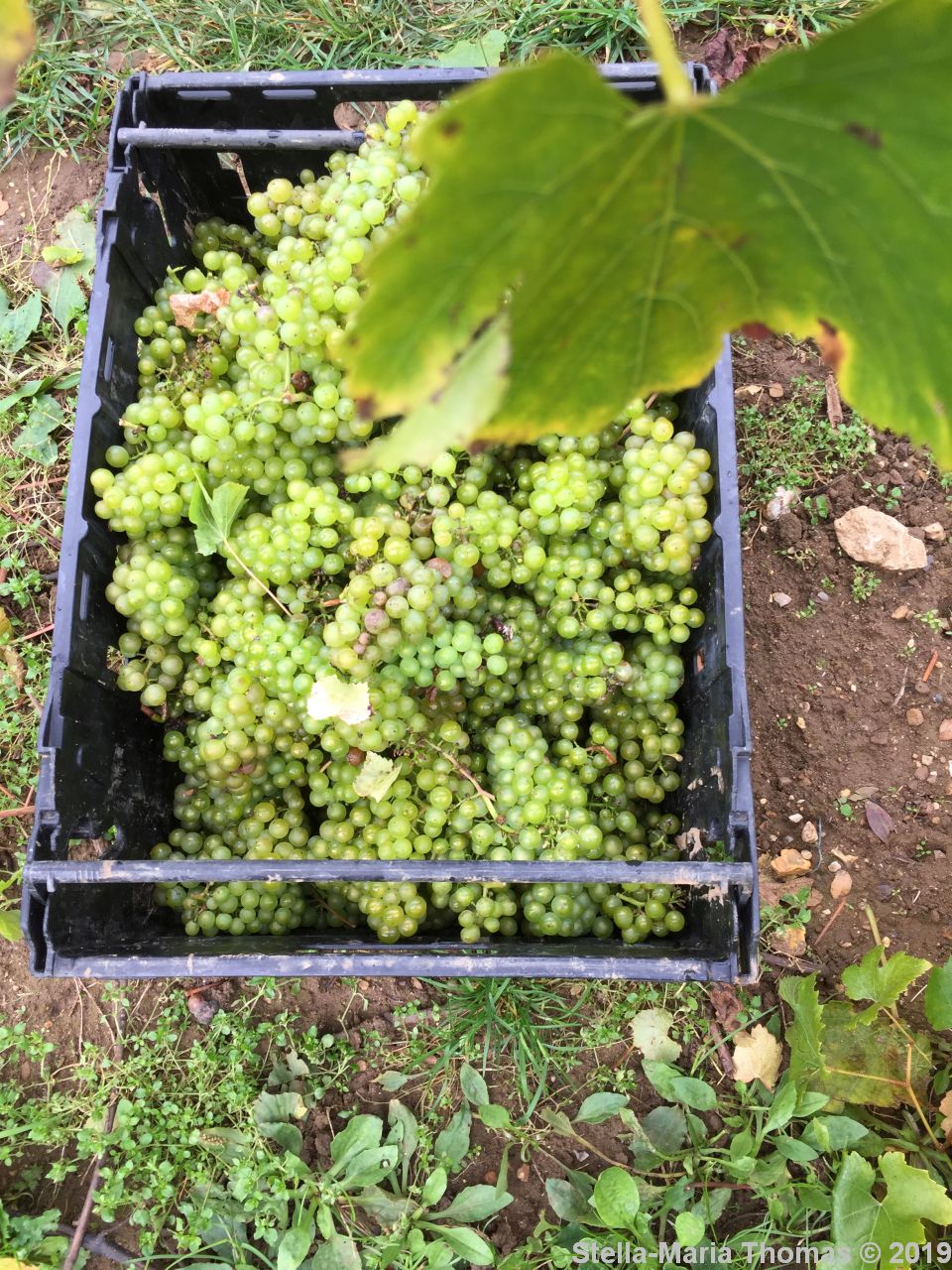 Some of the people who had picked before brought with them gardening kneeler pads or even small stools and it soon became apparent that that was a wise choice. The height of the vines was such that they came up to around waist-height and the bunches of grapes were about halfway up the branches. Thus to cut them you either needed to kneel down in the mud, or squat down, cut the bunches and chuck them into your bucket, then stand up and move to the next vine. Lather, rinse, repeat. After a couple of hours of basically doing squat after squat after squat, I was definitely feeling it and the mid-morning coffee and biscuit break was most welcome, if nowhere near long enough. We were all soon out there again. 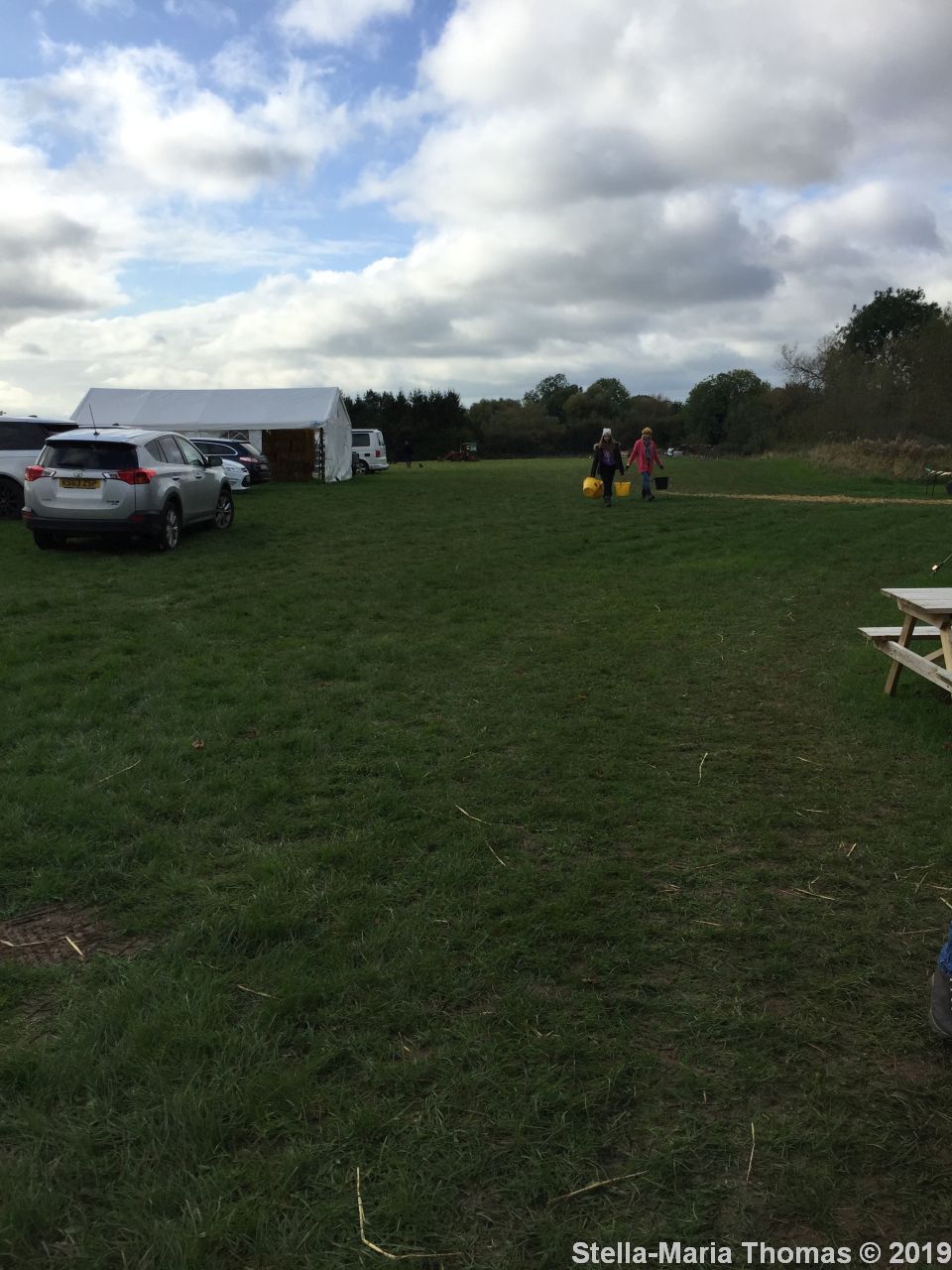 By lunchtime we had made really good progress cutting the designated fruit, in this instance Chardonnay, and so we had another stop, this time for a lunch of chicken stew and bread, with a glass or two of the vineyard’s sparkling white to wash it down. Tim answered questions about the wines and the vineyard and then it was time to get back to work. 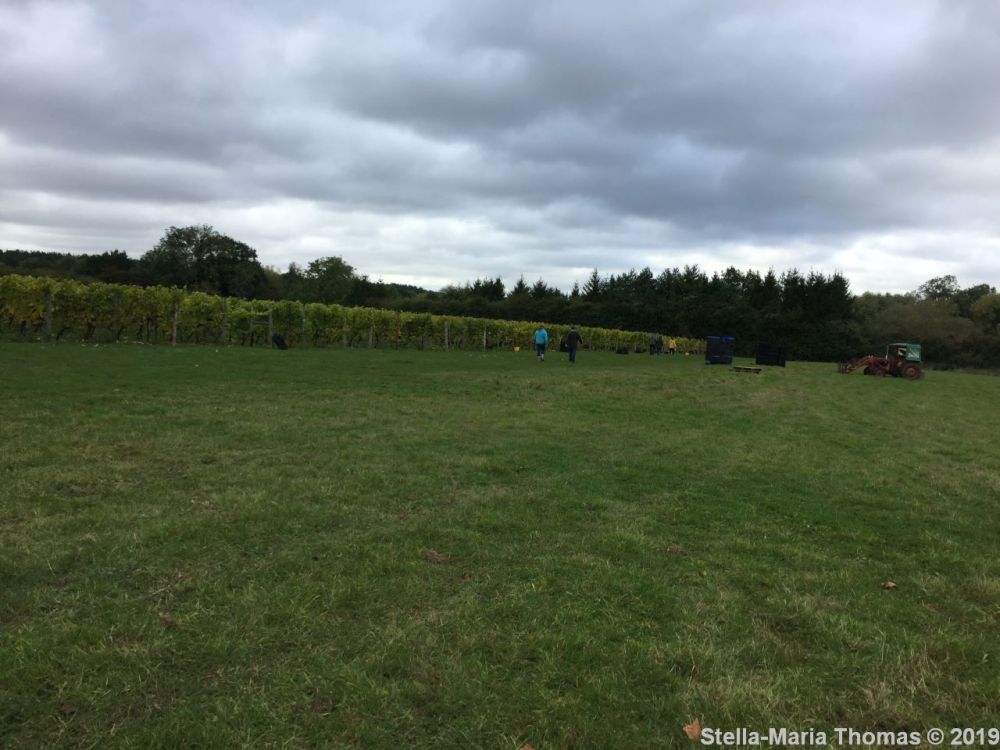 There was certainly less than half the crop still to be gathered in once we returned to the vine rows. It was just as well. I could barely get back out of my chair, and looking around I could see I wasn’t the only one struggling. It was a relief that less than an hour later we were done, with no more grapes left to harvest. It was just as well, because the skies were becoming increasingly threatening. 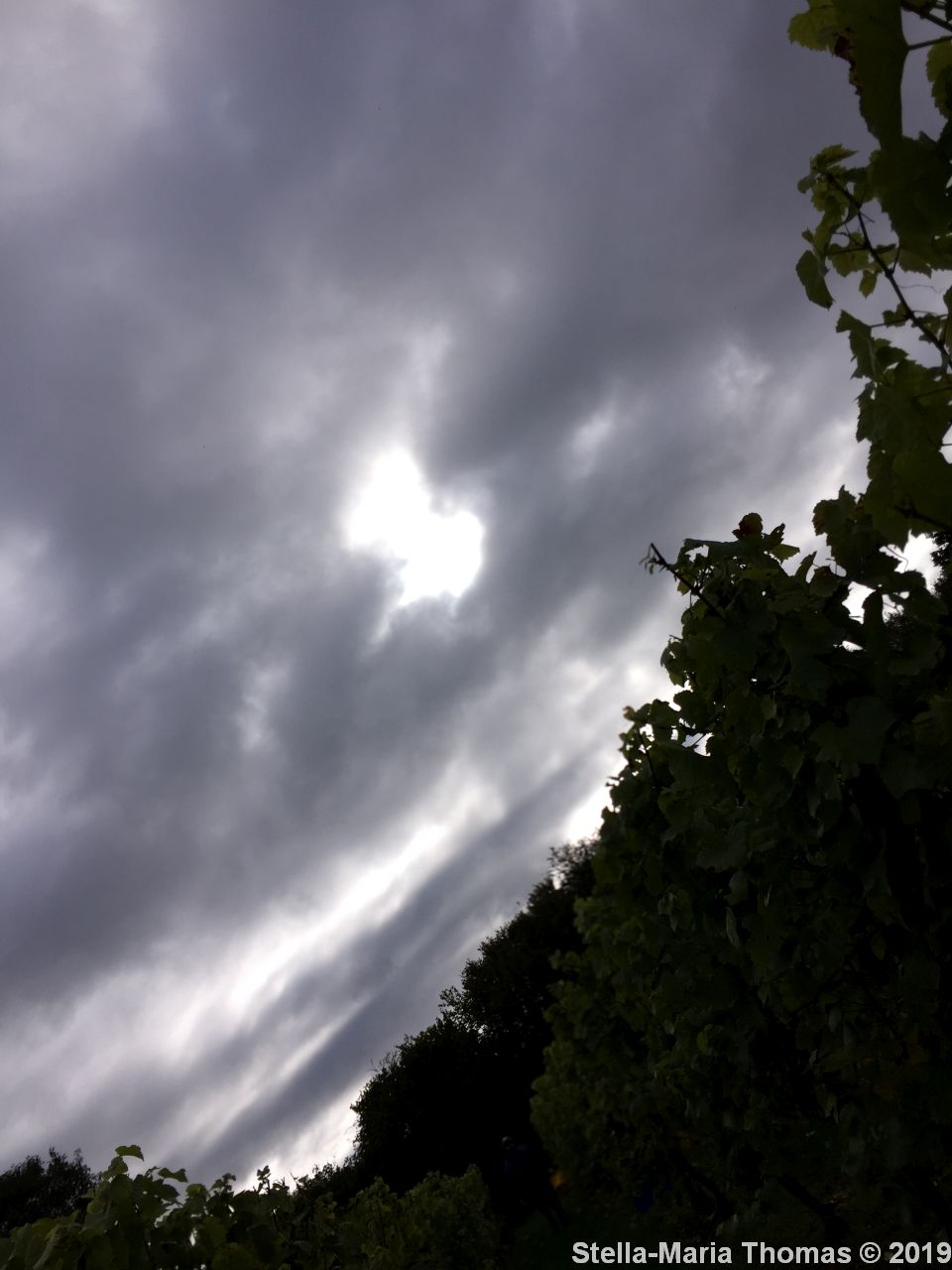 We handed in our buckets, and gloves and cutting tools, and I hung around for a bit of conversation with Tim, before collecting my reward of a bottle of wine from a previous harvest before climbing stiffly into my car to drive the handful of miles home, where I eased my aching muscles in a hot bath. 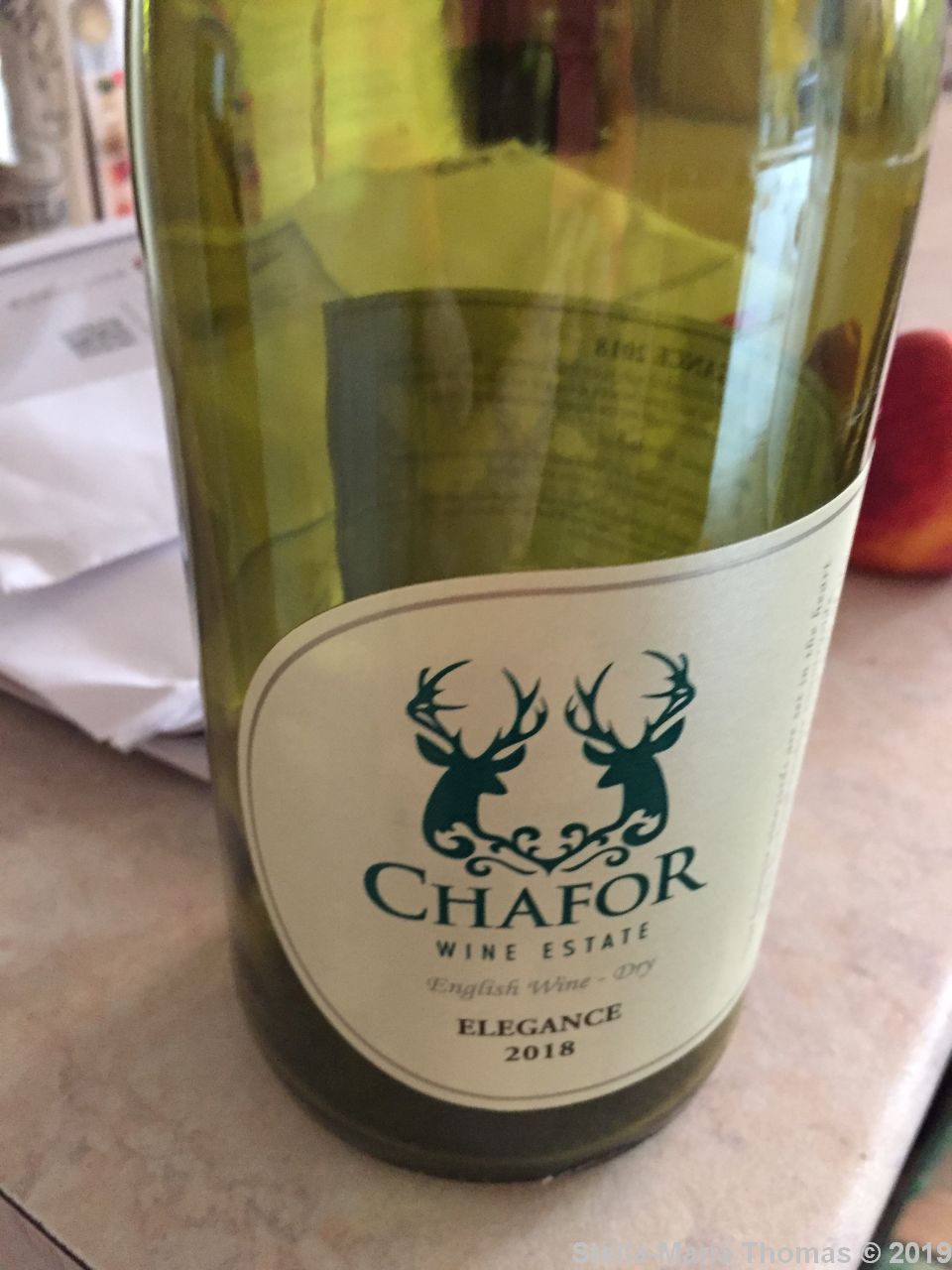 Getting up the following morning and finding it really hard to stand up gave me a new appreciation of how hard life in a vineyard can be. And I’m never going to complain about the price of wine again. It took me three days to get over it fully.