And so to our first dinner in Hamburg. We stopped off in the Crowne Plaza bar first, because they had given us a pair of welcome drink vouchers and it seemed churlish not to use them. The staff were friendly and fun, and we enjoyed a couple of glasses of sekt before heading out to go to Tyo Tyo, a nearby fusion and sushi restaurant that, from reading the menu, seemed to me to be more Japanese than anything else. A little advance research told me that we could get there by public transport, if we took the number 6 bus away from the centre of town, getting on at the Graumannsweg stop which was apparently a three minute walk away. The Hamburg card we were in possession of would cover it, and there were other buses than the 6 running all night, so we should also be able to get back by bus if we timed it right. If not, taxis seemed to be plentiful and can be hailed on the street (not always the case in some places we’ve been).

We found the bus stop, which was a lot closer than three minutes away, it being just across the road from the hotel, and quickly figured out which direction we needed to go. 5 stops and 10 minutes later and we got off, then walked for around 10 minutes to find the restaurant. It’s very brightly lit on the outside, but the name sign is small and there’s just one near the door, so there was a brief moment or two of confusion, while we wondered if we were in the right place or not! We were, and were soon indoors and out of the cold and damp. The waiting staff quickly had us seated with a fresh glass of sekt in front of us, and the menu. When I had booked, I’d requested the “Hamburg Ganz(s) weihnachtlich” menu, which is both a perfectly reasonable banner for a campaign that runs from Saint Martin’s Day (11th November) through till 23rd December and a terrible pun on the subject of goose for dinner! By tradition, goose is particularly associated with Saint Martin’s day, and so a group of restaurants in Hamburg and the surrounding metropolitan region get together every year to offer special festive menus with or without goose (or alternatively duck) under the motto “Hamburg Christmas (all Christmas)” or “Hamburg Goose Christmas” depending on whether you want to overlook the pun or not. It is organised by the Hamburg Tourist Association and from our experience it’s a cut above the average UK festive menu, with each menu interpreting the brief in their own way, ranging from the deeply traditional to the smartly contemporary. You can find out all about it on the Hamburg Kulinarisch website, from where you could also make reservations for many of the venues.

Tyo Tyo, aside from being achingly trendy – and so dark it wasn’t easy to read the menu – had gone down the contemporary Japanese route, and the result certainly read interestingly enough. While we enjoyed our drinks, various waiters stopped by, and we decided we’d let them serve us the matching wines as well, since they’d have a better idea as to what would go best with their food, and I wouldn’t have to find a head torch to try and read the wine list!

They brought us a house aperitif, and I would love to tell you what was in it apart from sekt, but I couldn’t hear the waiter very well either so you’ll just have to take my word for it that everything we drank was good, and well chosen. I’d certainly happily let them choose again should we make it back there. 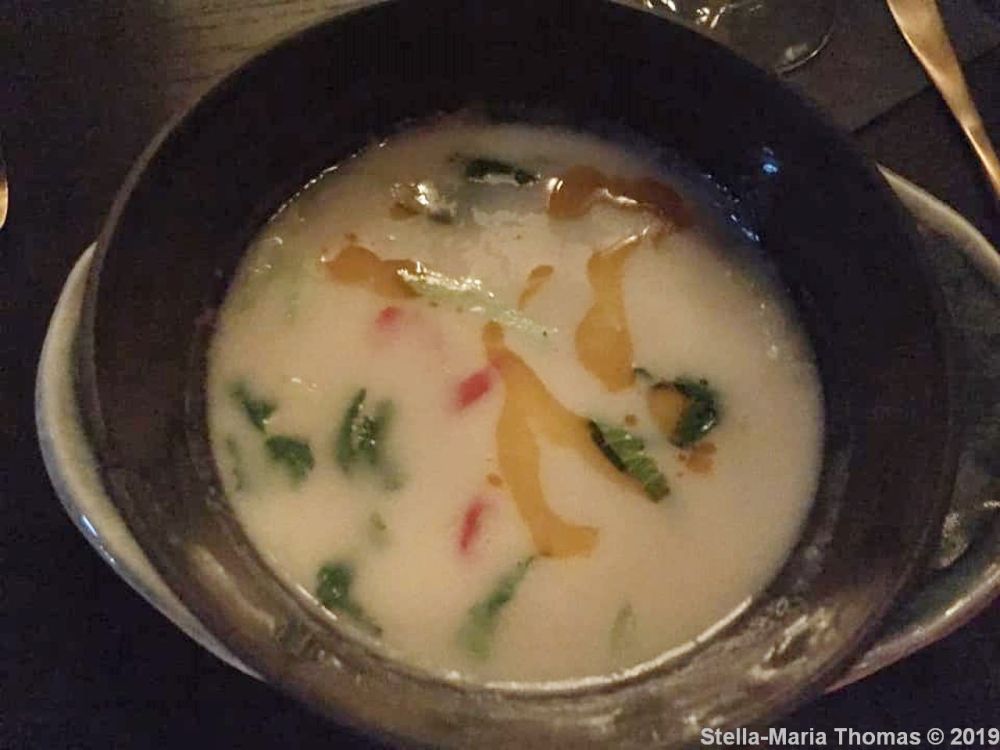 The first course was tom kha gai, a gloriously punchy soup with a base of coconut milk, and with peppers, pak choi, shiitake mushrooms and baby leeks scattered through it. It had just the right amount of heat, enough to warm you up on a cold night, but not enough to make you sweat, and we took our time enjoying it thoroughly. We were certainly appreciative of both the flavour and the heat!

The next dish up was a knockout sushi creation. The kokoa kamo roll was described on the menu as an Inside Out roll, with its star ingredient being duck leg, paired with red cabbage, avocado, sesame, a chocolate teriyaki sauce and puffed potato. I suspect it would give a sushi purist a fit of the vapours, but I thought it was brilliant. The combination of all those northern European winter flavours with Japanese standards was genius and I would have been quite happy to eat nothing further that night but to stay on the rolls. I really didn’t think they could top that. 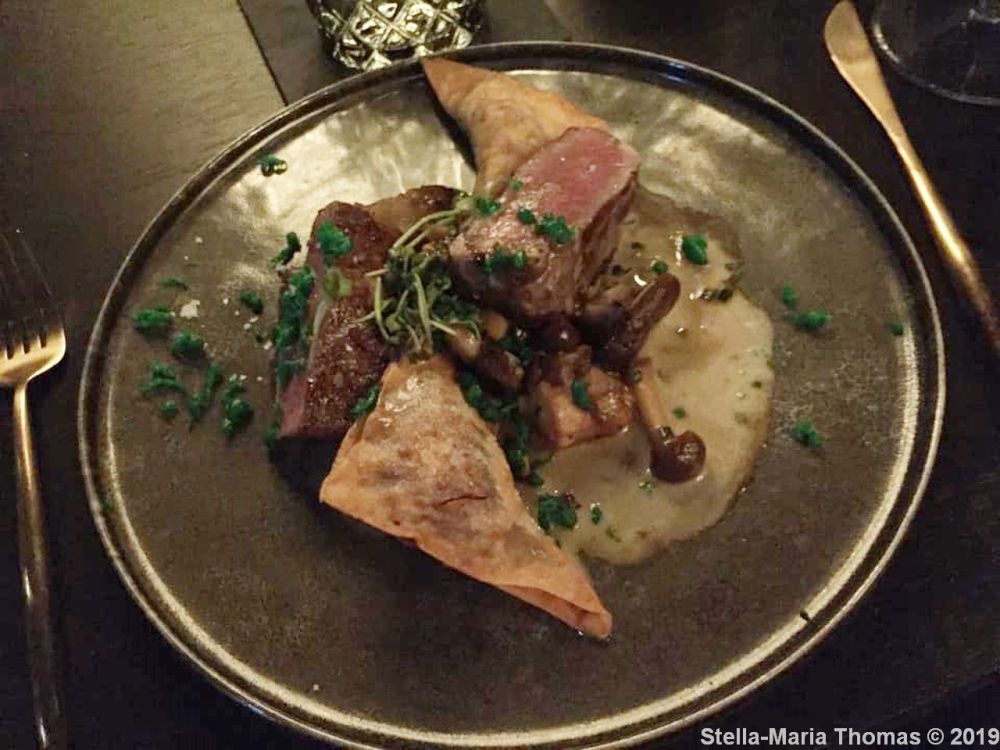 It turned out they could. The shika konoko which was in effect the main course was even better! Saddle of venison was served perfectly cooked, with a playful red cabbage won ton, king oyster mushroom, beech mushrooms and a morel cream sauce.  Perfect for the lover of game and of mushrooms. Still not enough mushrooms though, but then, I don’t believe any such thing exists! It was exquisitely done, and although it was possibly slightly more meat than I really needed, none of it went back to the kitchen. The service was running at a sensible pace and we didn’t feel at all rushed, which was nice. It was also what made it possible for us to clean our plates each time, rather than having to give up because we’d been made to eat too fast. 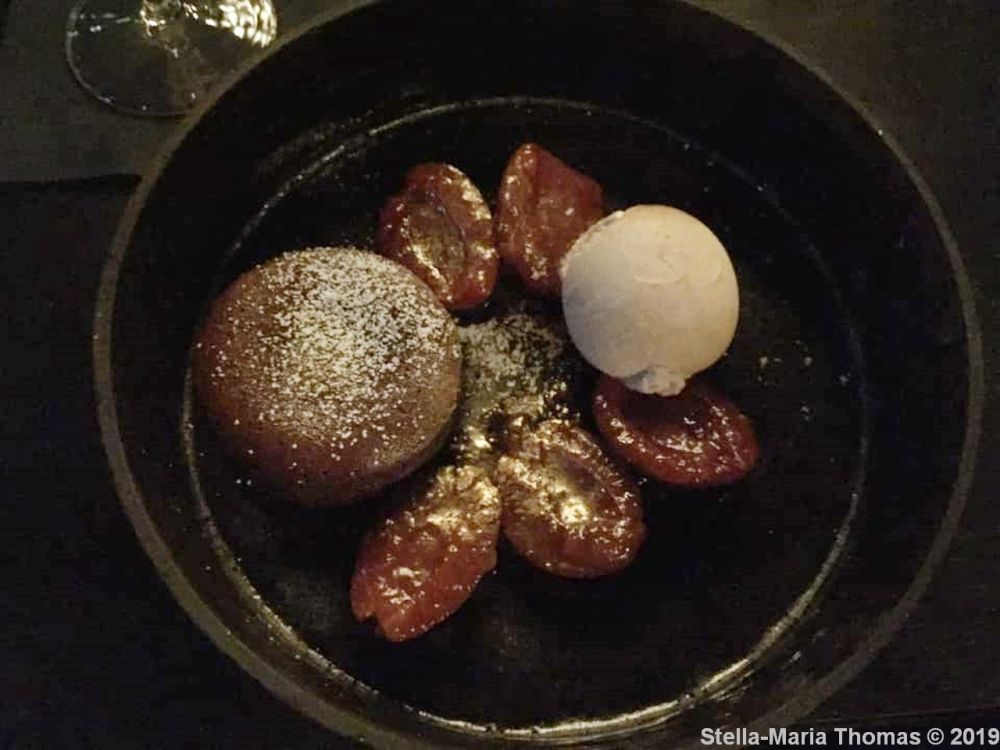 Sensibly, this set menu was just four courses and we now came to dessert, a shi-namon-plum according to the unreadable menu. It turned out, not at all surprisingly, to be a tiny chocolate fondant that was properly melty in the middle, with a serving of cinnamon ice cream, and some choya plums, which are plums that are used to make umeshu, a plum wine. They make an excellent dessert is all I know for sure! And so, dinner over, we walked back towards the bus stop only to find we’d just missed a bus, and it was going to be quite a long wait for the next one on what was essentially a very cold and wet night. A taxi hove into view so we flagged it down and minutes (and €8 later) we were back in the hotel thawing out! 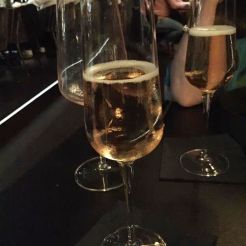