Friday night’s restaurant booking saw us again getting on the number 6 bus (I’m beginning to think there’s no other bus route worth bothering with in Hamburg – though I suspect I’m wrong) and this time getting off just three stops from the hotel as we headed for the splendidly named Wolfs Junge, a restaurant that felt both on trend and cosy, just what I’ve always hope for in a neighbourhood restaurant, but that you very rarely get. It was surrounded by apartment blocks and family houses and I suspect that the people who live around it do regard it as their neighbourhood restaurant. They are very lucky people, is all I can say.

We were soon settled in a table on a raised dais alongside a friendly birthday party group of around 8 people, and an equally friendly foursome who were already well into the menu. A glass of sekt was required while we considered the menu and decided how many courses we thought we could manage. We opted for the five course omnivores’ menu, and enjoyed our aperitif. 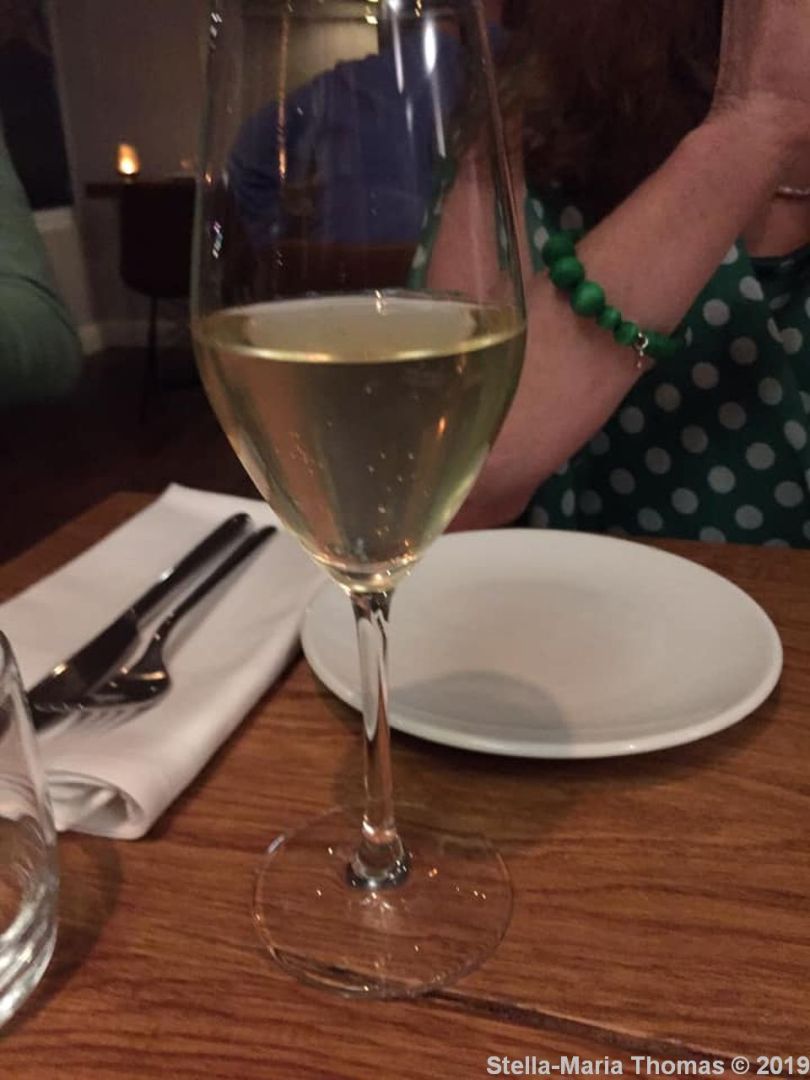 It was a very pleasant sekt, and, as you might expect from a restaurant described by Michelin as “the very epitome of ‘nose to tail’ eating. The ingredients are sourced from selected producers with some of the vegetables and herbs grown by the restaurant itself. Serves simple midday fare such as home-made bratwurst and an ambitious, creative set menu including saddleback, kimchi and fermented onion in the evenings” the aperitif was accompanied by some very fine amuse bouches. These took the form of some fabulous pickled carrots, a couple of deep-fried camembert balls, a creamy beetroot dip, and some lightly pickled goose meat in a terriyaki sauce. It was an excellent start to dinner. 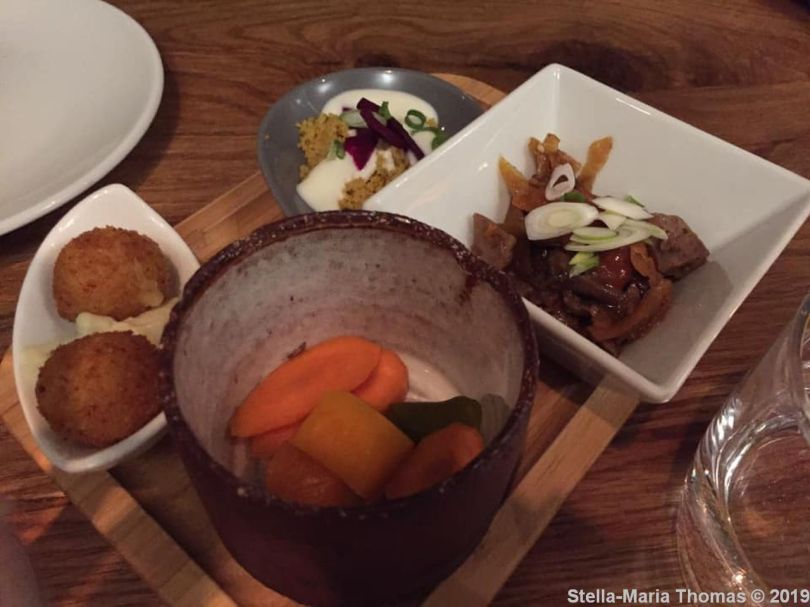 The sour dough bread and whipped butter was pretty good too, though we tried very hard not to demolish it all in one go. After all we’d still got five courses and matching wines to make our way through. Too much bread would make it too serious a challenge, we feared. 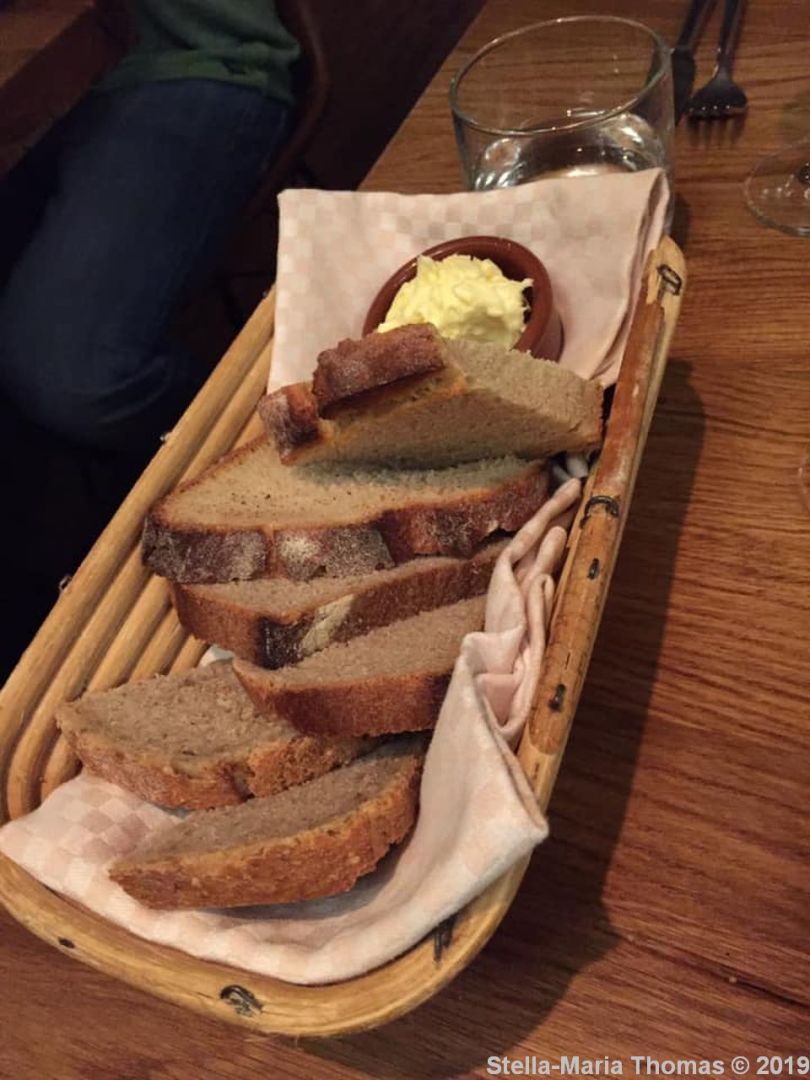 The first course duly arrived, and was a confit egg yolk, soft and oozing, and rich, served with pureed pumpkin, and pickled pumpkin, pumpkin seeds and home-smoked ham. It was beautifully flavoured and mixing the yolk through the puree created a sticky, soft, comforting mouthful of goodness. We were going great guns now, and the service was friendly, well paced, and well informed. It was looking like a good choice to wander out from the centre rather than in towards the city in terms of restaurant standards. If only all towns had restaurants like Wolfs Junge and Tyo Tyo. Then again, for that to happen most towns would probably need to be as rich as Hamburg, with more millionaires per head of population than anywhere else in Germany. 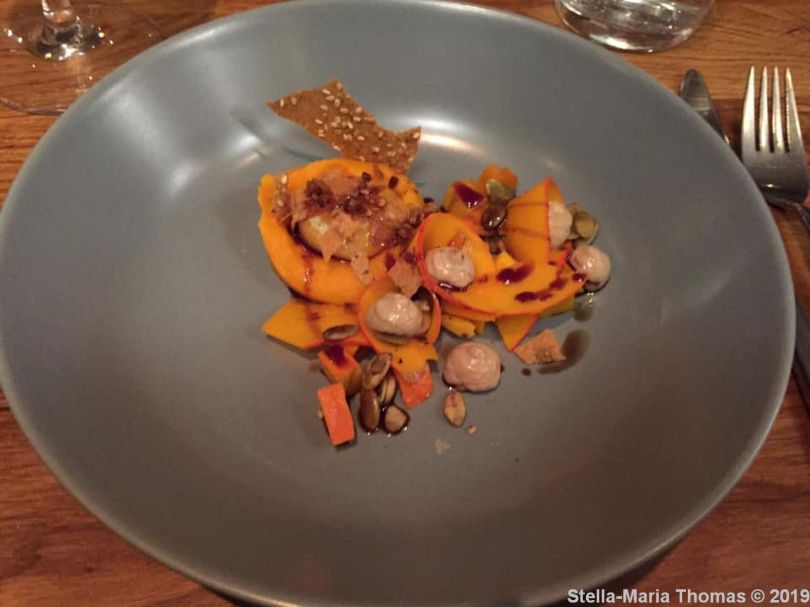 Next up was something that I had to look up, a Japanese “eierstich” which it turns out is a Japanese royale egg custard, creamy, voluptuous, splendidly rich and warming on a cold, wet night. The venison ham shavings set it off well and gave a salty lift to something that might otherwise have been cloying,and the fermented vegetables gave it a necessary kick of acidity that completed the dish. It was very good indeed, and the crispy vegetables also boosted the texture. There’s some clever thinking going on in the kitchen here, and I’d be interested to see what else they do, especially in the summer months when there is far more choice of fruits and vegetables available to the chefs and their brigade.

Next up was the catch of the day, with an apple-butter sauce, and beetroot. Unfortunately, after a couple of mouthfuls of perfectly cooked fish, the norovirus I’d obviously been incubating since we’d arrived in Germany started to make itself felt. I couldn’t eat any more and was feeling decidedly unwell. It was a real pity because I sure the rest of the menu would have been equally superb, and I’m very sad that I had to miss it. 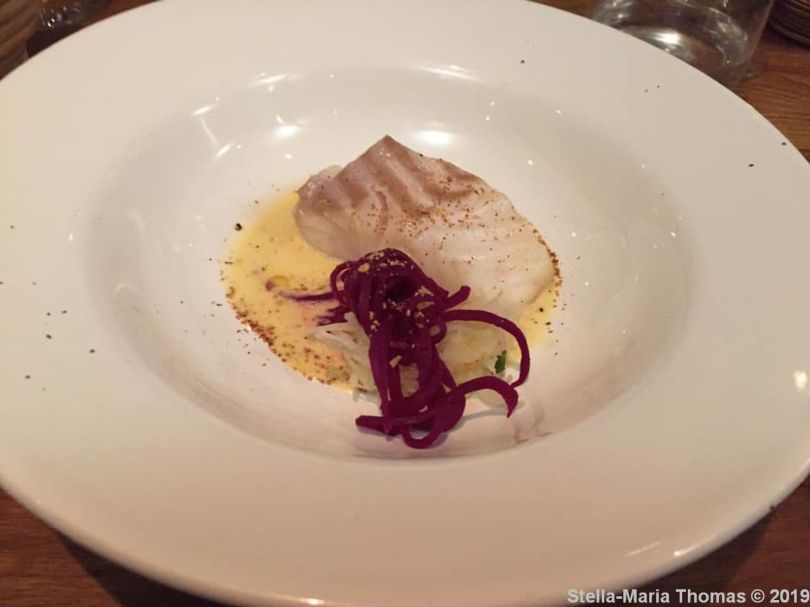 After a couple of trips to the restaurant bathroom, I had to make my apologies to the restaurant staff and ask that they bring us the bill and find us a taxi. They duly did both of those things, only charging us for what we’d actually had, and getting a taxi to the door in double quick time. And that was the last food I would eat for 36 hours…