I should probably call this the Great Lockdown Bakeoff (or something). I’m sure it’s a pretty common theme (certainly it would seem to be if you look at how damn hard it has been to lay hands on flour, yeast, eggs or icing sugar at various times during the Covid-19 lockdown. Whether it’s just a UK thing or not, I can’t say, but having found a number of sources for dried goods and for that matter eggs, I’ve been going off on experimental baking sessions ever since March 16th when I was ordered to work from home for the foreseeable future. A week before it all kicked off I had stocked up on bread mixes so the first thing after the great banana bread production line and the lemon, blueberry and almond cake were a number of loaves of bread at a stage when there didn’t seem to be any available in the shops.

There were a couple of ciabattas that got a tad too burned on the top and a linseed loaf that didn’t. As soon as the local baker’s shop reopened, and I’d found a source of flour (a company called Wellocks, which supplies restaurants during normal times, but which now does “Wellocks at Home” as well, delivering fruit, vegetables and a number of essentials to your door in certain areas, while donating a portion of their profits to one of the charities set up to support the hospitality industry) I was on to try other things. Over the years my stunning inability to make scones has been a source of some surprise, because I’m a very competent cook normally, but they never, ever come out right. They don’t rise, they are solid as a rock and while Lynne loyally eat them, I’m pretty sure she doesn’t enjoy them as much as I would hope. So, back to the drawing board… Anyone who knows me as a cook will know I’ve a tendency to resort to Felicity Cloake’s splendid “How to make the perfect…” series in The Guardian newspaper and website. The deal is she does a barrelload of reseach, finds the most likely recipes from chefs she trusts,and the experiments to create the ultimate version of the recipe. Surely she would have done scones? Well, yes, she has, and cheese scones too. I decided not to get clever on my first attempt to solve the issue so I stuck to the plain scones recipe. She recommends “00” flour, and part butter, part lard. Also, do not under any circumstances roll the dough, just press it flat by hand. I did exactly as I was told, and lo-and-behold I had scones that rose, that were soft and crumbly in the middle, and that made the ideal base for jam and clotted cream (or clotted cream and jam depending on your stance on such things!)

Did they work? They most certainly did!

You can adjust the recipe to get a sweeter scone by adding 25g of caster sugar to the dough. Leave everything else as it is. The results, a week later, came out just as good, proving that the first attempt was not a fluke.

Just for good measure I also made the cheese scones that Felicity describes. We had some leftover cheese and Lynne had expressed a wish for me to try cheese scones. So cheese scones it was.

These too worked like a dream. I can probably never make them quite the same a second time, because I used a load of leftover cheese, three different types. As you can see, they looked very tempting.

I was so impressed by the success of these two recipes that I promptly bought the book (Completely Perfect, 120 Essential Recipes for Every Cook) and would recommend you all do the same. It’s been very successful for tartiflette, and for cauliflower cheese so far, so it’s more than paid its dues.

Anyway having finally, at the age of 61, conquered the mighty scone, what next? Well, when we were in Bordeaux in 2018 we discovered the town’s signature bake, the canelé, described by Wikipedia as “a small French pastry flavored with rum and vanilla with a soft and tender custard center and a dark, thick caramelized crust. It takes the shape of a small, striated cylinder up to five centimeters in height with a depression at the top. A specialty of the Bordeaux region of France, today it is widely available in pâtisseries in France and abroad.” In a fit of what might then have been over-enthusiasm I bought half a dozen of the moulds (striated or otherwise), because they were tiny and pretty and I figured I’d give making my own a go. Two tear’s later that opportunity had come.

I wasn’t sure it was going to be that simple, but I gathered the ingredients together and had a go, using a recipe from the Great British Chefs website, ironically written by a Frenchman, Pascal Aussignac, who is the man behind a restaurant group I like very much in London, the Gascon Connection. It looked easy enough. What could possibly go wrong?

I didn’t have enough moulds so I improvised with some bigger tins that I hoped would work. These were not wholly successful, and the mixture oozed and the stuck. I got one out easily, but the other three really weren’t pretty. The ones in the proper moulds, though, were another matter and slipped happily from their moulds, and were demolished in less than 24 hours with a coffee or two. I was sufficiently impressed that I bought some more moulds so I can practice.

Finding myself with several lemons excess to requirements again, I moved on to make a lemon drizzle cake. I particularly likes the recipe I found for this on the Great British Chef’s site as well, this one by Karen Burns-Booth. Ok, I didn’t have any edible flowers handy, so I used small gold cake decoration balls instead, but it still tasted good and it disappeared very quickly.

The final experiment of week was a Runeberg cake, a speciality from Finland. They are a cylindrical cake (another one) and are named for the man regarded as the national poet of Finland, Johan Ludvig Runeberg (1804-1877). Every year on and around his birthday, 5th February, these cakes are sold all over Finland and are hugely popular. It wasn’t February. I wasn’t in Finland but I was going to do them anyway, especially as I now had the larger canelé moulds which would do nicely for these as well. I was especially keen to give them a try because we had them in 2016 during our Finnish road trip, sitting in a shady courtyard café in Porvoo.

Digging around for a recipe, I should probably not have been surprised to find one on by Bronte Aurell, who owns the very fine (and very funny if you subscribe to their newsletter) Scandikitchen shop and café website. It looked pretty simple so I set to.

I used to believe I wasn’t very good at baking. It’s a pleasure to find I’m actually not bad at all. 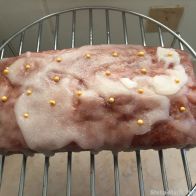 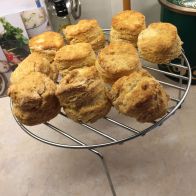 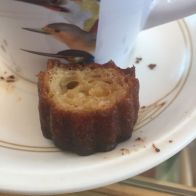 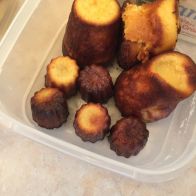 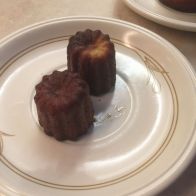 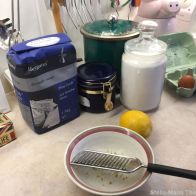 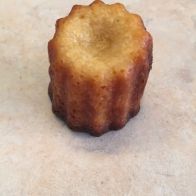