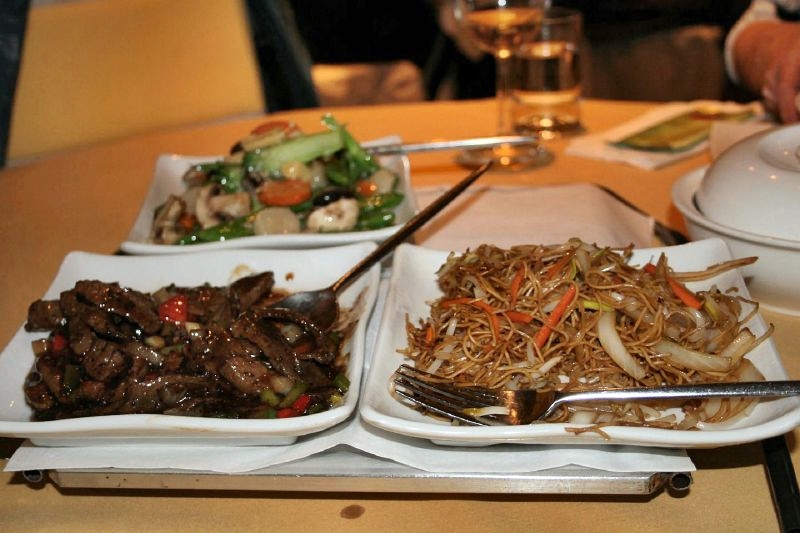 Well, it was a pretty exhausting weekend (and if I never see a cardboard box again it may be too soon), but it had its good points too. On Saturday night, knowing we’d none of us feel up to cooking dinner, we booked into the ridiculously named Woksoever over in Cottingham, because it’d been well-reviewed and it sounded interesting with its claim to be a Hong Kong styled place.

After some discussion – and a complete failure to communicate with one of the waitresses – it took a very long time indeed to get hold of our aperitifs (and in fact it required the intervention of two increasingly senior members of staff to actually get that sorted and establish that actually, yes, they did have sherry). Only when they finally brought the drinks (after about a 30 minute delay) did we actually agree to order food. Mum’s Pernod came with ice but no water…

And the “dry” sherry was anything but – as can be seen from the colour. 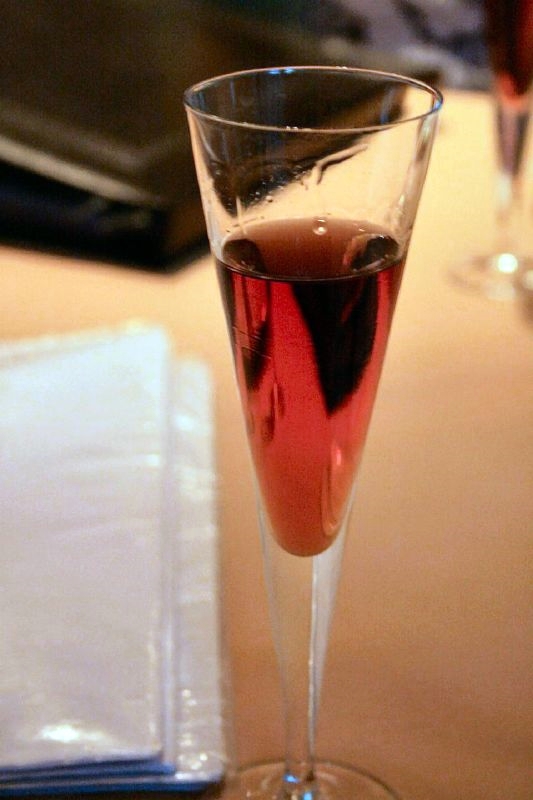 It was also very noisy in the room, despite the fact that it wasn’t full, which was odd as there didn’t seem to be any reason for it. A lack of ceiling baffles of some sort, perhaps… The room itself is on the garish side (lots of shiny gold fabric, far too many flat-screen TVs on the walls), but at least the lighting wasn’t the bright overhead neon that would have made for a far too authentic Hong Kong-style experience. At this point it wasn’t boding as well as it might. However, after some consideration – and the arrival of water, plus a batch of two type of prawn cracker – we ordered. The starters were clearly freshly cooked, as a) they didn’t arrive immediately and b) the textures were perfect. We started with Hong Kong Style Shredded Duck Rolls, which could have contained more duck to my way of thinking, but were crisp and hot and tasty; 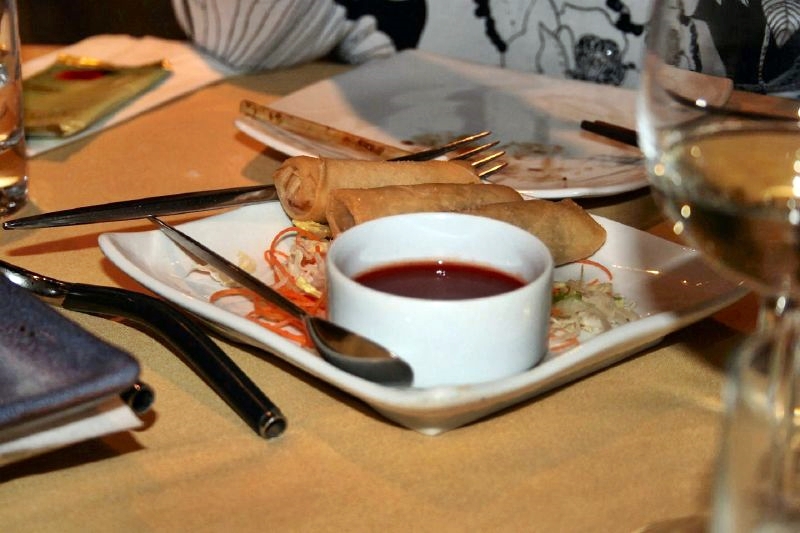 Japanese Style Grilled Fillet Steak Skewered which was meltingly tender, and – to continue the Japanese theme – Yaki Unagi (Grilled Eel), which was softer than I’d expected but very tasty. 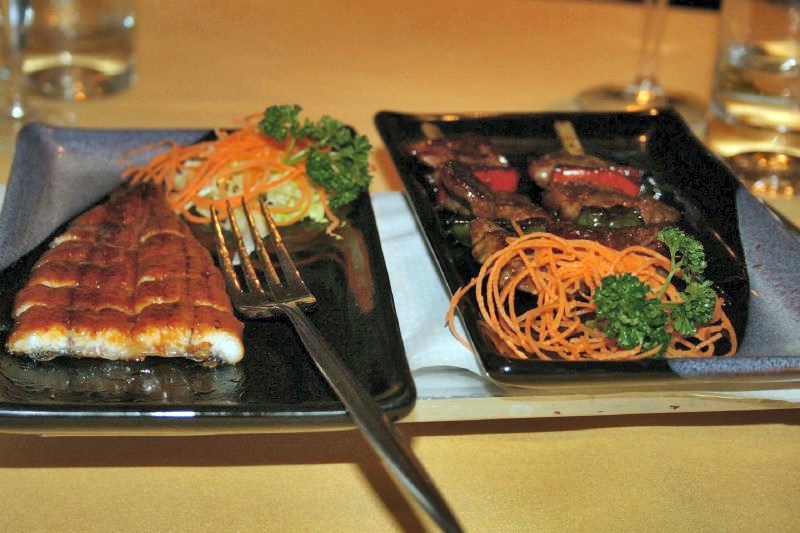 There then followed a sizable pause, which gave us time to drink some of the very fine Alsace Gewurtraminer, and do a lot of talking. Eventually, the main courses started to arrive. First up were the Plain Fried Soft Noodles, which were pretty standard though they’d managed that rare trick and kept the bean sprouts crispy. The textural contrast between them and the noodles was just as it should be.

The Hong Kong Style Quick Fried Sliced Venison in Black Pepper Corn Sauce was again tender, good quality meat, and wasn’t fleshed out with lots of vegetables (a way of keeping costs down for the restaurant) but appeared to be pretty much nothing but meat in a very tasty, rich sauce.

It wasn’t quite as rich as the Mixed Seafood in Portuguese Style Sauce (I quote: “Creamy coconut flavour is used to enhance seafood cooked the woksoever way with mushroom, taro & onion”), which was enormous, full of prawns, scallops and squid, and took me straight back to Macau in my mind.

Last – but by no means least – was the Steamed Sea Bass in Thai Sauce, the sauce packed with lemon grass, lime leaves and red chilli peppers as well as pepper and onions, and the fish cooked to perfection. 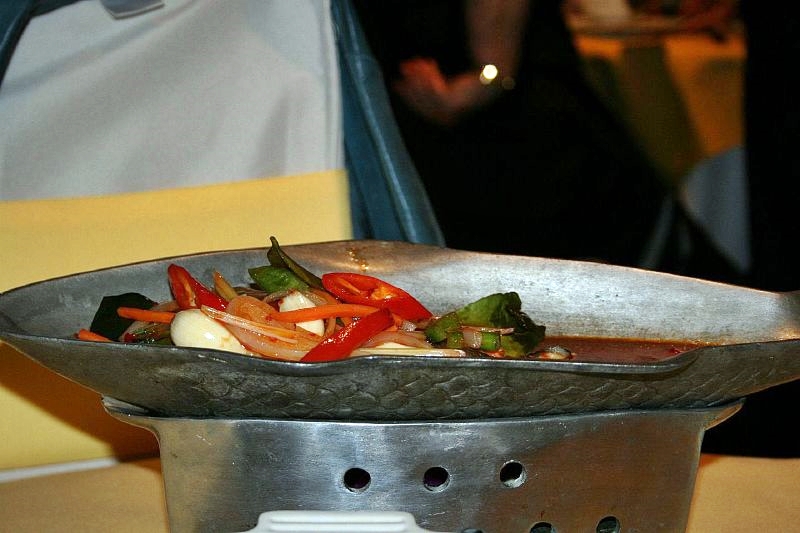 From slightly less than promising beginnings, we ended up having a great meal (although they really ought to sort out the aperitif situation and possibly make sure all their waitresses speak enough English to understand the customers – I watched the one who failed to bring our drinks back off fast every time a customer tried to speak to her and have to be rescued by a colleague). Anyway, I’d happily go again based on the standard of cooking we encountered. Next time, I’d like to try the Japanese menu though.