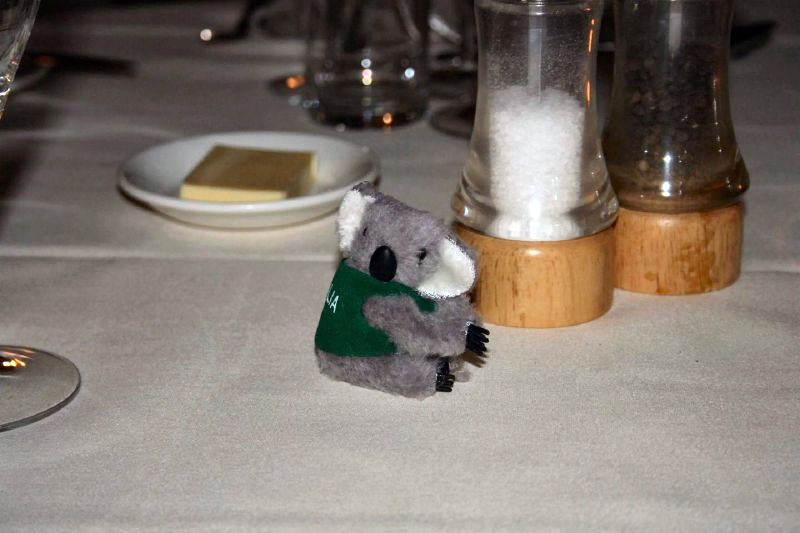 This afternoon I dashed to the garage to get a new headlight bulb fitted to the Astra (I swear this car eats light bulbs – I’m averaging one every three months right now), before picking Andrea up from Bicester station to take her to ours, and later to the Antipodean dinner at The Roade House.

And a very fine dinner it was too. We started with bruschetta with tuna tartare and roasted tomatoes, accompanied by a glass of Green Point Brut Sparkling, from Crown Cape, Australia. The tuna was marinaded in some sort of citrus juice (possibly lime), and there was a lovely hit of fresh ginger too. I could quite happily have eaten a plateful of them… 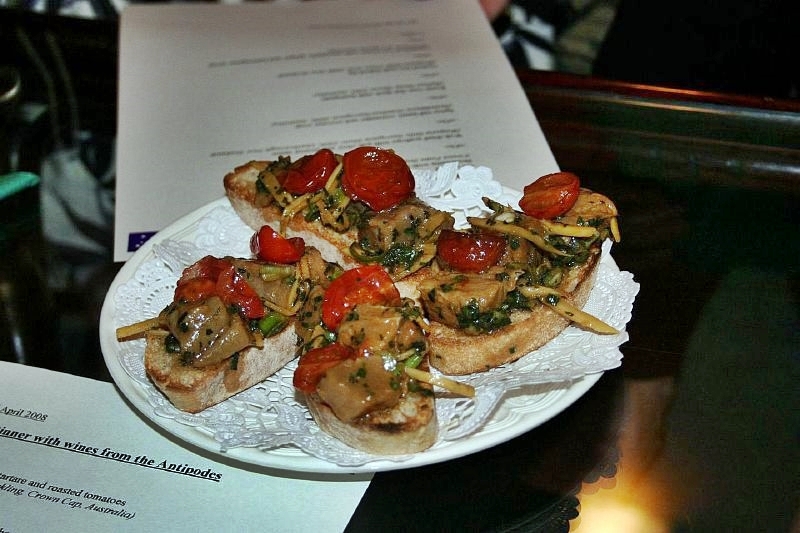 Next up were wok-fried scallops with pak choy and a light, but spicy peanut sauce, accompanied by a lovely, fresh Waipara Hills Sauvignon Blanc 2006, from Marlborough in New Zealand. 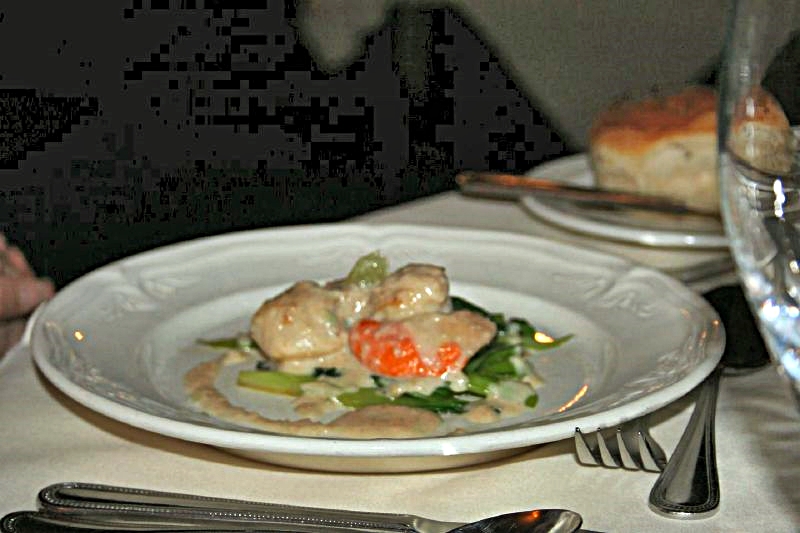 We got a pause, which was probably as well, before they wheeled out the spicy red lentil, coriander and coconut soup, which was wonderful as was the Australian Stonemason Semillon/Sauvignon 2006 that went with it. Again, I could have happily eaten that all night, had it not been that I knew what was coming next – and I failed to get a photo of it!

The piece de resistance as far as I was concerned was up next in the form of roast corn fed duck with kumquats. The kumquats were wonderfully sweet and sticky, and they cut through the fattiness of the duck perfectly. The roast potatoes were perfection, fluffy on the inside and crispy on the outside, just the way they should be but so seldom are. The Ballast Stone Shiraz 2005 that went with it was one of the best and and biggest Australian red wines I’ve encountered in a while. 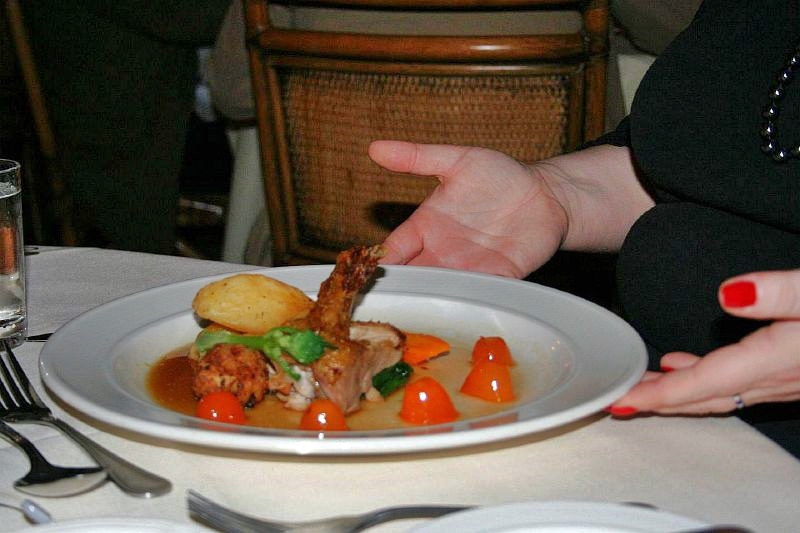 By now we were running out of steam, but it didn’t stop us demolishing the cheese course, which was Oxford Iris (imagine something very much like a particularly tasty Brie in both texture and flavour) with a very sticky baked fig that complemented it nicely. There was a change of red wine to a New Zealand Kim Crawford Pinot Noir 2006, which was very pleasant indeed and which we managed to blag a second round of. 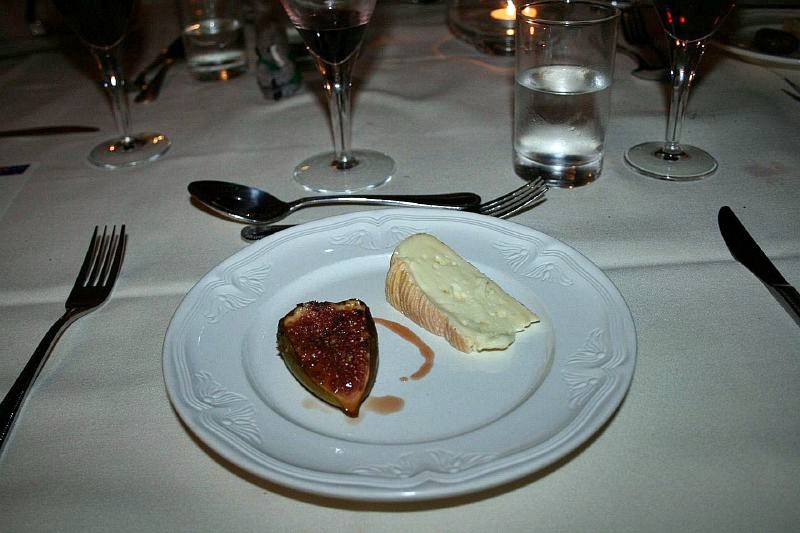 And finally, dessert. Cardamon ice-cream with pineapple, ginger and lemongrass syrup was beautiful with the contrasts between the heat of the ginger, and the sharpness of the lemongrass off-setting the ice-cream and bringing out the best in all the ingredients. Pineapple responds really well to that sort of treatment (if you don’t believe me try my version one day – peel and slice a pineapple very thinly, and leave the slices to marinate for 12 hours or more in the fridge in a mixture of honey and chilli powder – then eat). That was served with a selection of liqueur muscats that ranged in style from something similar to port, to a slightly sharp but still sweet dessert wine. 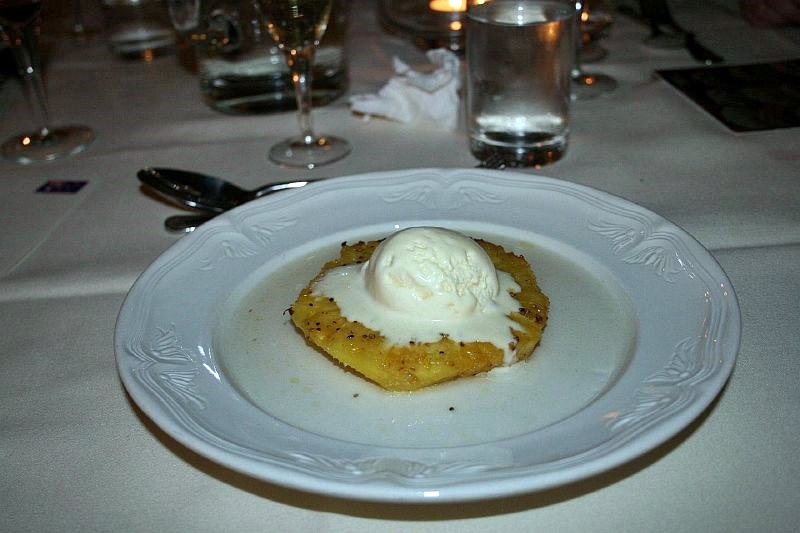 And all that for £55.00 per person including wines. We paid the bill, fell into the taxi and went home to sleep it off!