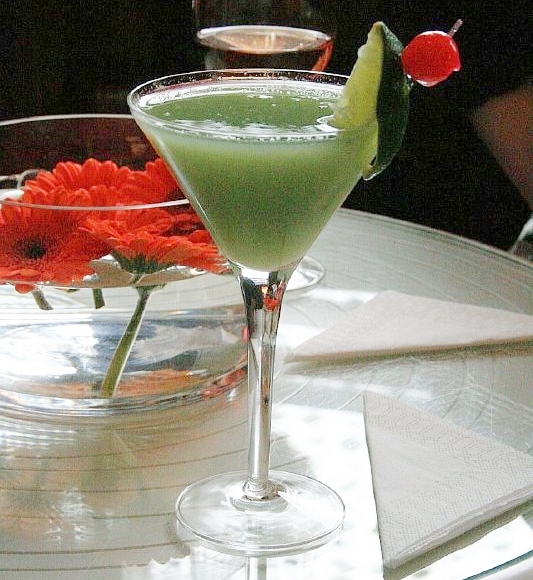 We’re not eating out much this year but yesterday was a special event (A’s Birthday celebrations) and she’s been hankering after eating at Locanda Locatelli almost as long as it’s been in existence. So, a table was duly booked for lunch yesterday and ten of us assembled there a little after 1pm to enjoy what would turn out to be a truly special meal.

However, before we got to the food we settled in at the bar for aperitifs, either Kir Royales, Gin and Tonics or Green Apple Martinis. To accompany these some utterly wonderful Parmesan crisps were supplied. They’d obviously been baked and then had extra fresh Parmesan grated over them. They were incredibly crumbly, beautifully cheesy and light as feathers. And I could have happily sat there all afternoon eating my way through plate after plate of them… except that I had a feeling what was to come would be even better. 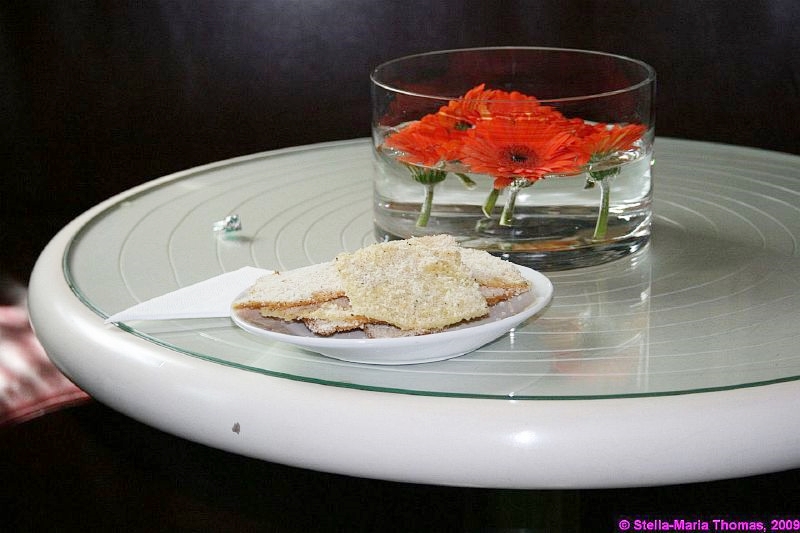 And so it proved. Eventually we were shown to our table, and baskets of bread appeared, everything from cheese and courgette, to foccaccia, to tomato bread, with a spicy, peppery olive oil to dip it in. And then the food started to arrive in earnest. We started with three large dishes to share. Home cured bresaola: 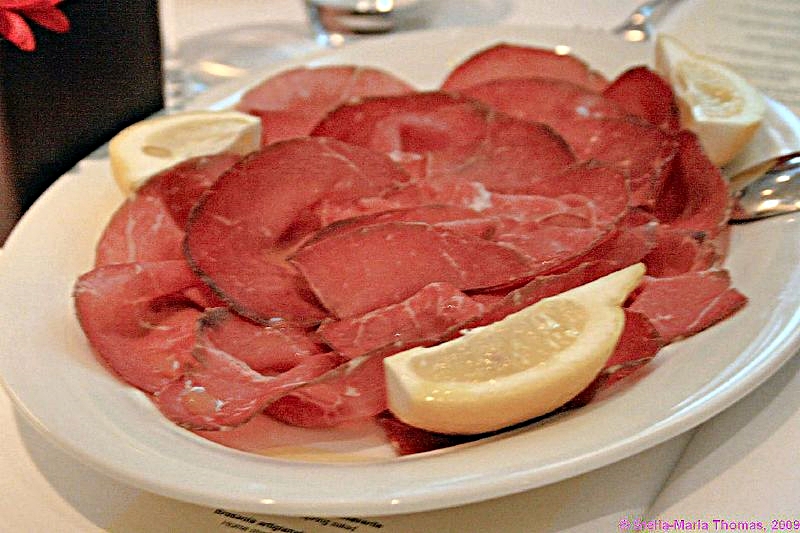 A broad bean and pecorino salad: 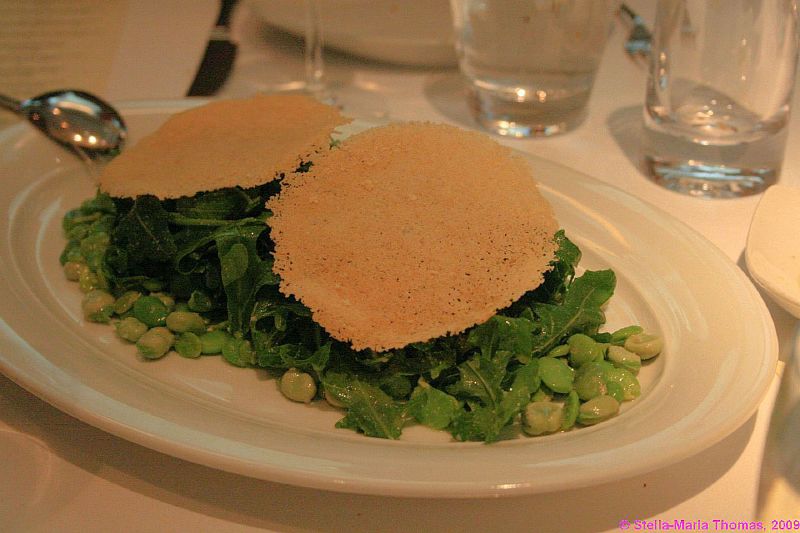 And a spring vegetable salad that contained all sorts of goodies including yellow beetroot, fennel, asparagus, green beans and cherry tomatoes. 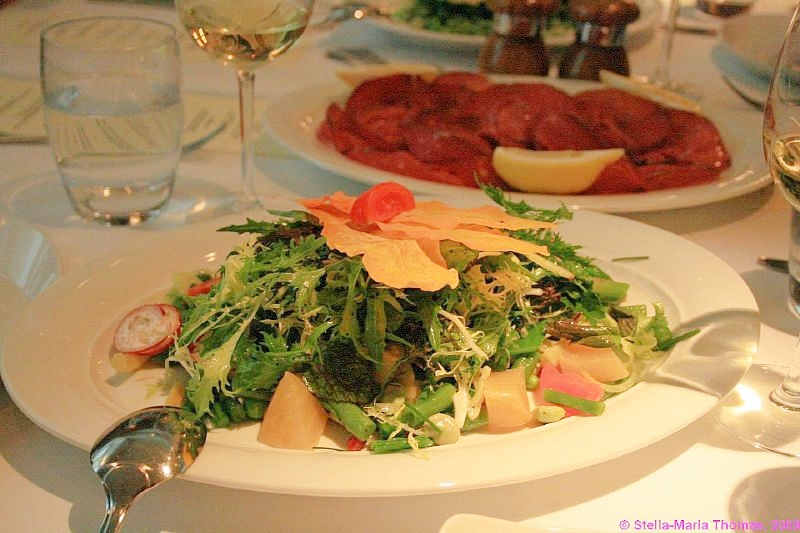 Personally I probably ate way too much of the broad beans, but they were almost irresistible. This was followed by a choice of dishes, with a risotto made with barolo (a fine Italian red wine) and castelmagno cheese – a very rustic looking dish but none the worse for that: 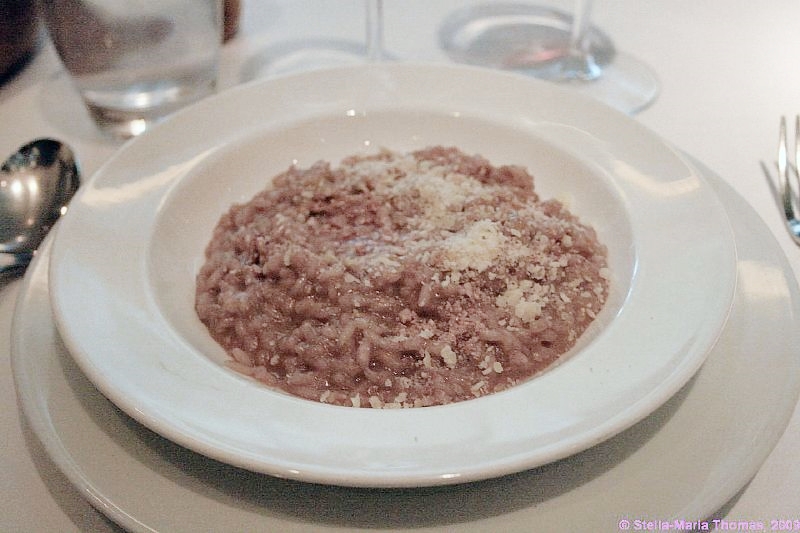 The alternative was a plate of pasta packages filled with ricotta and asparagus. 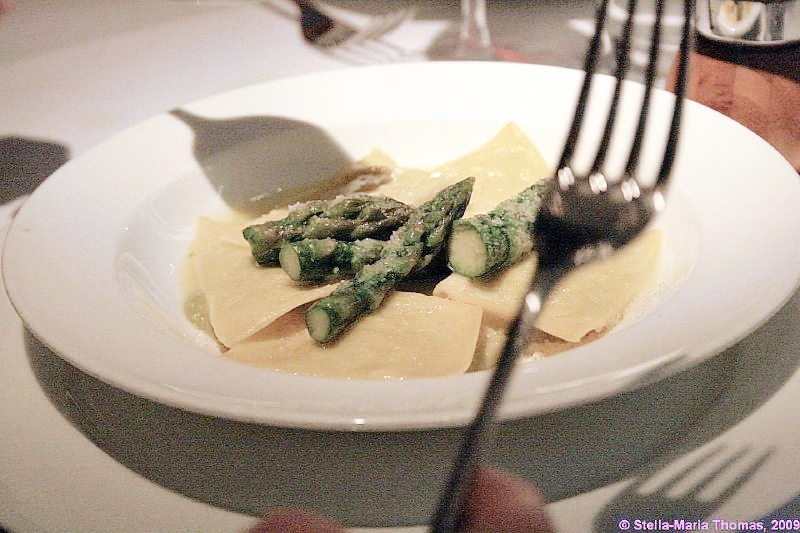 Both were delicious (although the best risotto I have ever eaten is still the risotto Milanese at the Derby Grill in Monza last year), and the whit wine that John and the sommelier chose between them was a brilliant match, sharp and fruity and clean on the palate. By now we were all starting to slow down, but it didn’t stop the waiters bringing more bread – we all tried to resist, knowing there were two more courses to go.

Next most people opted for the cannon of lamb with aubergines, peperonata, and tomato caviar. The meat was pink and cooked to perfection, the peperonata was still crucnhy, but just on the edge of softness, and all the bitterness you sometimes find in peppers was gone, and as for the tomato caviar, it was incredibly intense in flavour, and tasted wonderful. 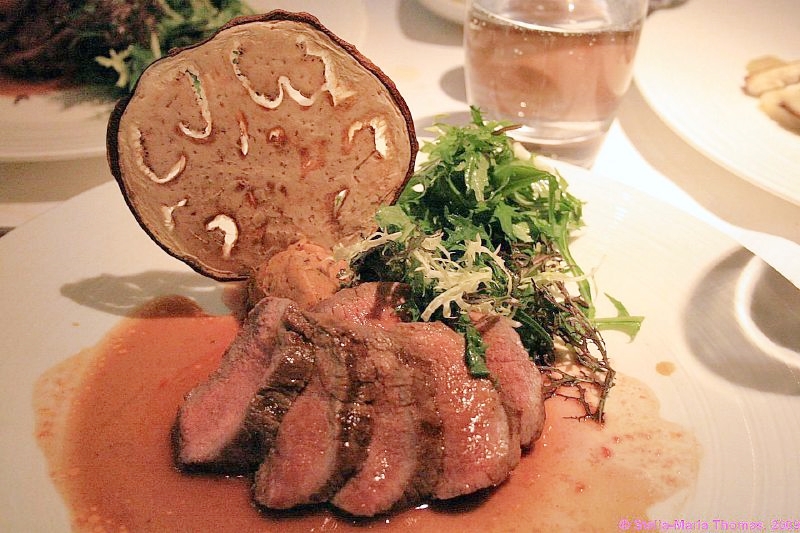 The sea bream was also excellent, the fish skin was crisp and well-seasoned, the meat still moist and falling off the bone with no effort required on the diner’s part. Brilliantly done and with a light “bagna cauda” sauce, it really didn’t need any further embellishment. 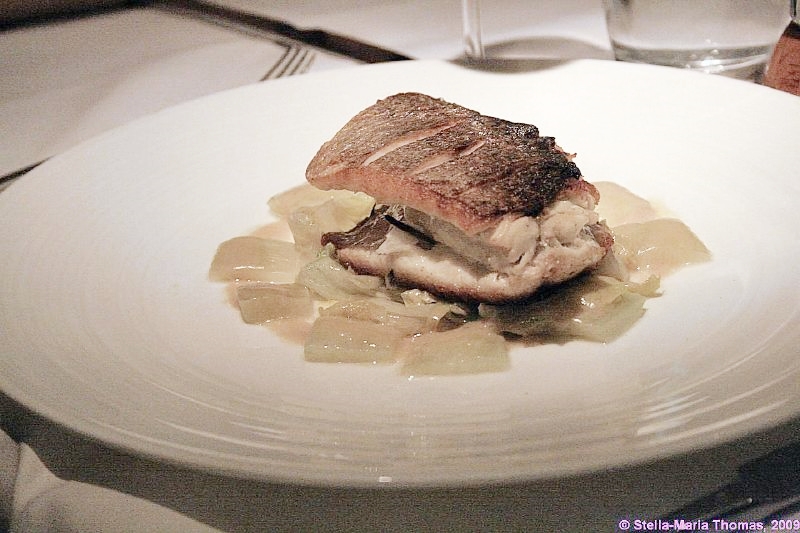 The selected wines were again perfectly matched, though sadly I have no idea what they were as I never did get a good look at the labels. Suffice to say they were superbly drinkable.

We’d made it through. Only dessert left to find space for…!

And what desserts too. The lemon cream with an Italian “Eton mess” of meringue and icecream looked terrific: 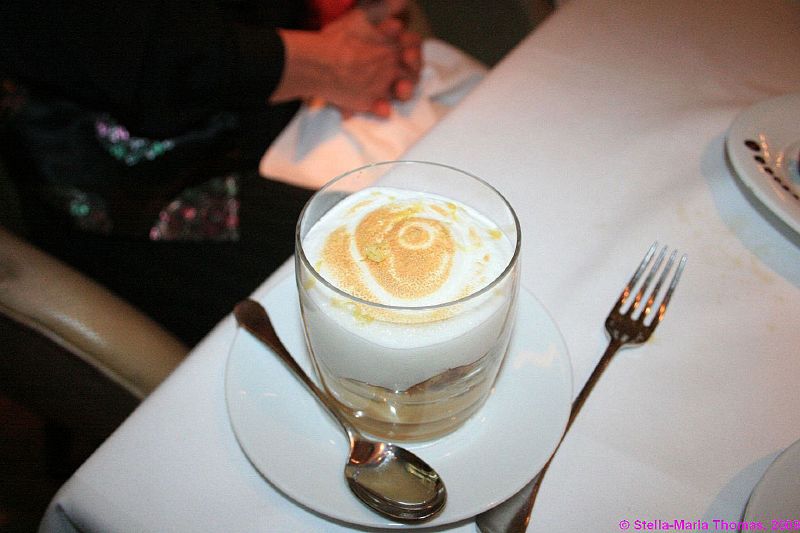 However, the poached pears were my choice, one done in red wine and one in white, with cinnamon ice cream and mascarpone ice cream, prettily decorated with some biscuit spirals. It went down a treat, although by now I was beginning to suspect I might never manage to eat again (or in fact need to). 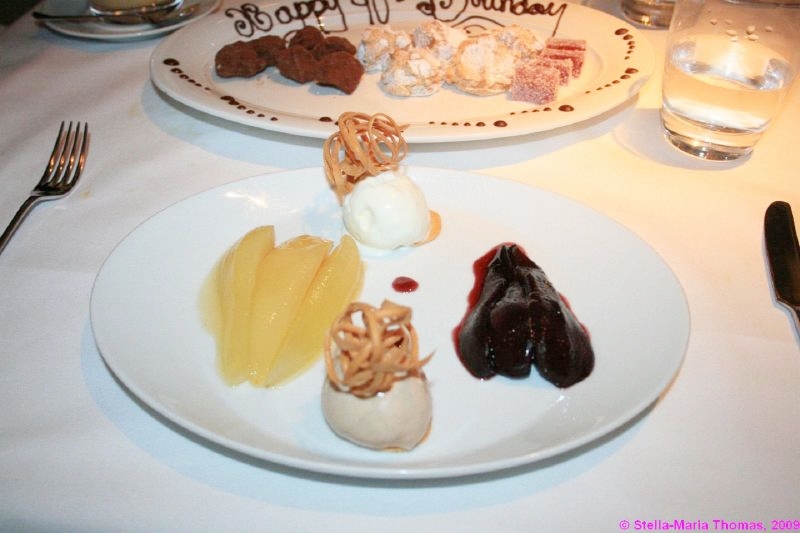 That just left coffee (espresso for me) and petit fours, which arrived on a plate decorated with birthday greetings, showing just how much care had been taken. 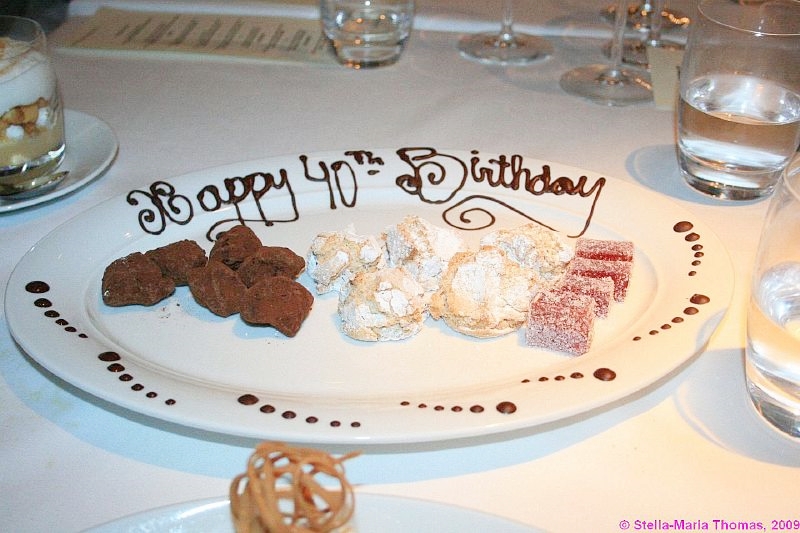 Finally, replete, considerably poorer, but very, very happy, at around 6pm we staggered out of the restaurant and went on our way, in our case on the short walk to Marylebone and the train for Bicester. We’d have all been even poorer if it hadn’t been for J’s generosity in insisting on picking up the drinks bill for the entire table, which is way above the call of duty but was much appreciated.

At Marylebone, having failed to get on the 18.20 train because it was ridiculously packed, we went back onto the concourse and picked up a peppermint tea each to aid the digestion, getting on the 18.50 very comfortably and arriving home just after 8pm, after which all we could do was change into loose clothing and collapse on the sofa. All in all a memorable meal in a venue with a wonderfully warm ambience. Highly recommended, I’d say.