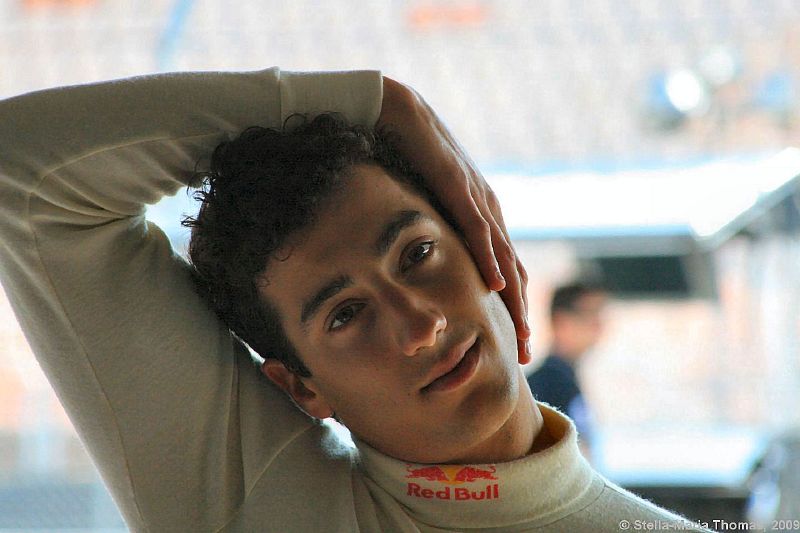 It’s been a long time since we last did a road trip of any great note, probably because flights are so much cheaper these days than when we first started travelling to races in Europe quite so frequently back in 1989. Some of these trips became frankly ridiculous – for example the three weekends in a row when we travelled out overnight on the Thursday or Friday and came back overnight on a Monday, including 1989 when we did Spa, Jerez (OK, so we flew to Madrid but it’s still a damn long way from Madrid to Jerez, especially in a car with maladjusted headlights), and Le Mans on consecutive weekends in September. Or the time we did Spa and Silverstone on the same (bank holiday) weekend. At least this promised to be far less strenuous than any of those!

We got off to a reasonable start too, getting the car packed and ready and setting off at 9.30 prompt as planned, and making it to Dover in time to get on the Eurotunnel train half an hour earlier than planned – settled on the train we munched our way through two packets of Waitrose’s sandwiches (smoked salmon and cream cheese, and crayfish and rocket) with a latte from the terminal coffee shop. Once clear of the tunnel and out onto French roads, we set off on an epic drive across France, Belgium, the Netherlands and Germany (passing Zolder and the Nurburgring en route), with our annoyingly stupid SatNav trying very hard to take us off the motorway, drive us round in a circle and take us back on again, for preference one junction further back from where we’d got off in the first place. (Thank you, Charlotte! Very funny!) The result was we hit Brussels around 3pm, and promptly got stuck in traffic on the Ring. It got so bad that I hauled us off the motorway myself at that point, and we detoured through Woluwe and Evere. I knew all that time I’d spent living in Brussels would come in useful one day! Anyway, we finally extracted ourselves from the anarchy of Belgian driving, and made it across the border, but not before we’d crawled past Louvain/Leuven at about 15mph.

It was 6pm by the time we hit Germany. A brief coffee stop and some sushi, followed by fresh fruit salads was enough to keep us going, and finally we were on the autobahn. Charlotte kept informing me “Warning: your speed is excessive!” to which Lynne was heard to darkly mutter “You ain’t seen nothing yet”. And she was right. With the SatNav giving us an estimated arrival time at Hockenheim of 21.30 it was time to floor the accelerator and join the ranks of the German starcruisers (not easy in a Vauxhall Astra but we did our best!) And we did, handling roadworks, dimwitted lorries and sudden rain showers with ease. The time reduced, we hit Hockenheim at 21.00 and made our way to the Hotel Motodrom, which had several advantages over any other hotels in the area, starting with being a five minute walk from the press office. It also has clean and comfortable bedrooms, a very good breakfast buffet included in the price:

And excellent views over the pits and start/finish line from the restaurant. 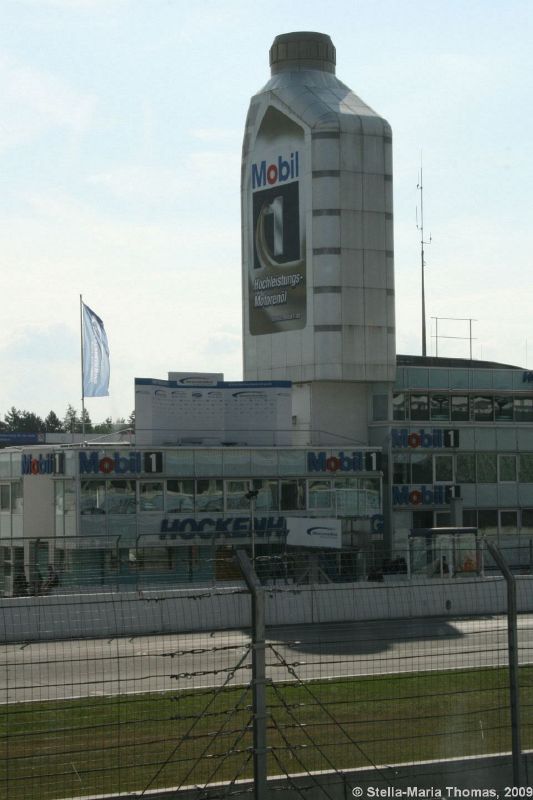 A quick change and we were downstairs meeting up with Glyn, as well as a very drunk representative of the F3 teams (who should probably remain nameless), plus several SRO officials who weren’t quite as worse for wear but can also remain nameless. Beers were sunk, food was procured and wine was drunk and we staggered off to bed, stopping only to unpack and reorganise our stuff for morning.

Friday was sunny, warm and very reminiscent of previous trips to Hockenheim in the early 1990s. For old times’ sake, having signed on after a very good breakfast (the mushrooms with herbs were especially good), Lynne and I wandered out to the infield and the Sachs Kurve. It didn’t seem to have changed much out there, though the monumental grandstand on the Sud Kurve wasn’t there back then.

It was fun to spend most of the day just doing nothing of any importance apart from wandering around with my camera in hand, and I realised I don’t do test days often enough. There was nothing that needed to be reported on, so it meant that I could get out and about and just take photos.

We also established that we were going to be pretty well fed at this meeting. There were soft drinks, teas and coffees, and water, as well as open sandwiches of cheese, ham or salami, and a seemingly never-ending supply of bockwursts and bread rolls. Made the offerings at Silverstone look a bit sad (machine made coffee and pre-packed biscuits that run out as soon as the photographers get to them) – the Motor Club that organised the meeting even invited us to their pig-roast and party this weekend, but it’s a bit of a long way to go for a party, even for us! Anyway, at the close of the working day we pottered back to the hotel, showered, changed and headed out to dinner. The Michelin Guide, when consulted the week before, suggested a couple of restaurants nearby in Ketsch (about three miles away), so I booked one for Friday and one for Saturday. And a very good thing they proved to be too. Friday we ate at the Restaurant Hirsch, conveniently located on the Hockenheimer Straße, which made it very easy to find. It was oddly empty for a Friday night, which suggests either the effects of the economic crisis or a very strange short-sightedness on the part of the locals. It was, of course, asparagus season in the area (Schwetzingen is a major growing centre and during the season in this part of Germany and restaurant worthy of the name will have at least a couple of asparagus-based dishes on the menu, and will often have an entire separate Asparagus Menu) so there was a great temptation to just go for the little white spears – they grow them white here in the main rather than green; it’s done by keeping the plants covered with earth so photosynthesis can’t occur. However, the restaurant was also very big on game, and neither Lynne nor I can ever resist…

And so we launched into Asparagus soup (for Lynne): 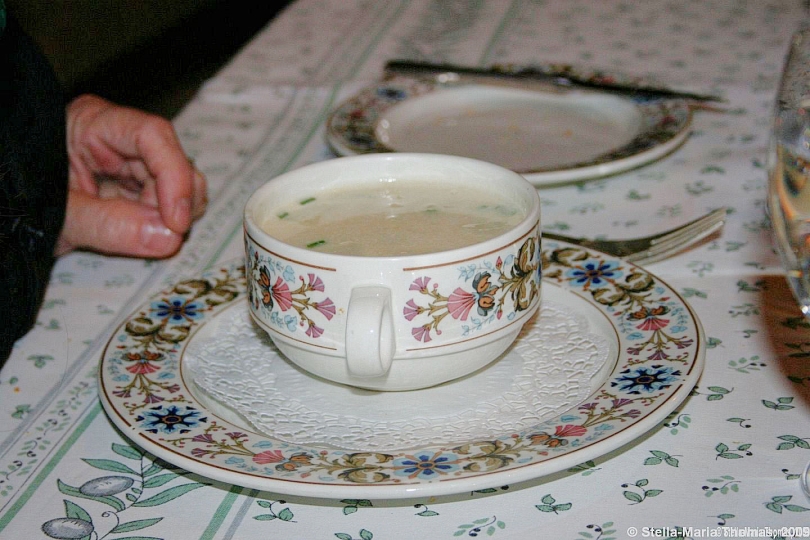 After that it was time for Aberdeen Angus Rumpsteak, with herb butter, salad and chips for Glyn:

While Lynne and I moved on to the venison medallions and wild mushrooms in Dornfelder sauce, with celeriac, green beans, cranberries and spätzle:

We drank some excellent local wines, and managed to share two desserts between three of us, namely the superb hot raspberries with vanilla ice cream: 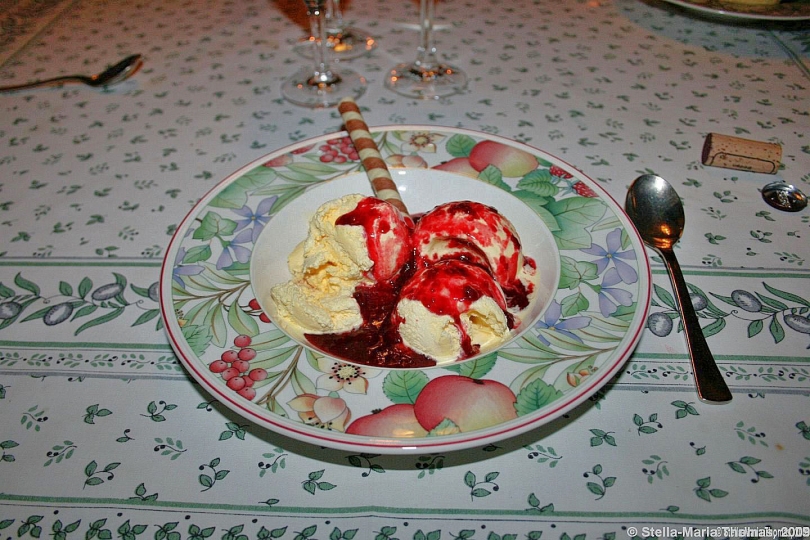 And then we staggered back to the hotel, had a drink in the bar (strangely with the same drunken rabble as the night before, but with the addition of Carlos Huertas’ mum, Adriana, who is delightfully nuts):

And then we lurched off to bed. 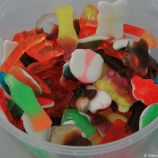 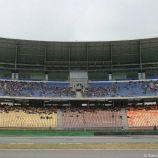 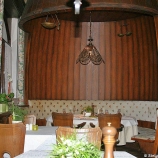 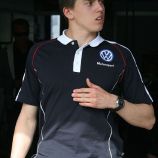 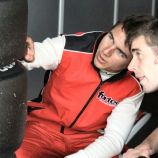 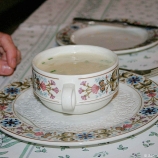 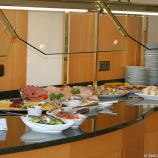 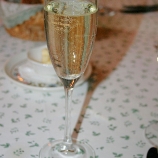 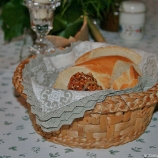 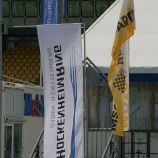 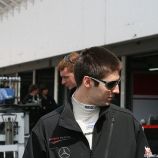 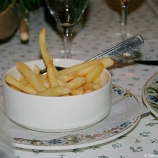 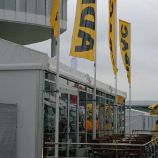 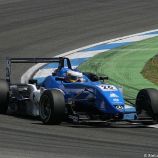 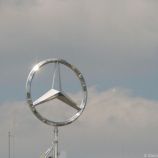 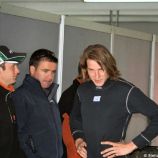 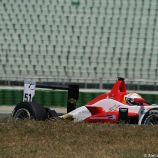 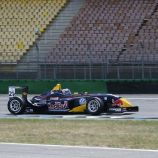 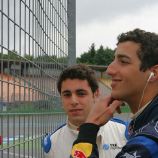 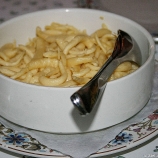 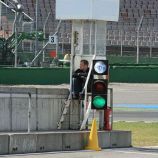 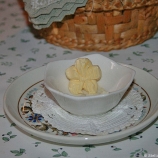 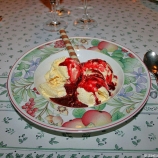 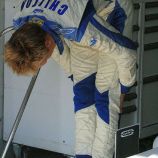