Qualifying Report:
At Zandvoort this afternoon Roberto Merhi (Prema Powerteam) was the dominant force from the minute the lights went green on the session. In the dry first session, the Spaniard claimed pole over Daniel Juncadella, in another of the Prema Powerteam Dallaras, with Felix Rosenqvist (Mücke Motorsport) snatching 3rd on the grid for the 21st running of the Masters of Formula Three. The second qualifying session proved to be a wash out with most people around 20 seconds slower, and thus the order was settled despite the best efforts of Kevin Magnussen (Carlin) who was doing his level best to get on terms with the Euroseries runners despite the supposed tyre issues that always raise their head at this meeting.

The first session was held at lunchtime on a track that was finally beginning to dry out after a wet and soggy free practice this morning. That had been plagued by a couple of heavy crashes, one for Carlos Muñoz (Signature) and the other for Felix Rosenqvist (Mücke Motorsport), both involving a lot of work on the part of their teams to get them out. Despite that they were both on the track within three minutes of the session starting, along with the other 14 drivers who have shown up for the latest edition of this race. Meanwhile, as the first flying laps were completed it was no great surprise to see Merhi was fastest, and it was beginning to looks as if the rest of them really are here to get their arses kicked by Prema Powerteam after all. I suppose it’s a change from ART Grand Prix handing out the punishment. It still seems a shame that only one of the British F3 International Series teams has deigned to show up though, the rest of them citing a variety of excuses including the admittedly valid fact that the Euroseries F3 boys have already raced at Zandvoort this season and would thus have a massive advantage, especially as the race also uses Kumho tyres, which is the Euroseries tyre. There does seem to be an element of deciding they are beaten without even trying though. Add to their reluctance the fact that the German F3 series have a championship round at Zolder this weekend, and the numbers are down a long way on what you would normally expect.

At least those who had turned up were getting down to business, with Muñoz proving he hadn’t done serious damage to the car by setting the 4th fastest time, while Nigel Melker (Mücke Motorsport) and temporary team-mate Lucas Foresti were 4th and 5th. Rosenqvist also proved that the car was fine after his crash by snatching 3rd, but with the track still a long way from dry, improvements were common. Next up was Kevin Magnussen, the Dane in 3rd though like the rest of the pack he seemed unable to do much about that man Merhi. He was bounced down a couple of places, while Merhi just went ever faster. The pace was still increasing lap by lap though, with Rupert Svendsen-Cook (Carlin) next to show his hand, leaping to 5th, while Juncadella was temporarily fastest. That wasn’t going to last either, and as Laurens Vanthoor (Signature) improved to 3rd, Merhi just continued to get faster and faster, leaving Magnussen as the best of the “Brits” in 6th.

The order remained fluid as the session developed, with Rosenqvist soon back to 4th behind Merhi, Juncadella and Vanthoor, much as expected. Merhi made an early – and very long – pit stop and was joined in the pit lane by Juncadella. Perhaps someone should sit on the Spaniards to try and slow them both down! However, while they were in, a number of other drivers took advantage of their absence to slam in some fast times. Magnussen improved again to go 5th, just as Vanthoor dived into the pits too. Running on an almost empty track, Magnussen came round again to go 3rd before he too pitted, possibly wondering what he would have to do to be faster in the second sector, which seemed to be causing him difficulties. Even in the pits Merhi remained on top of the times, leading from Juncadella, Magnussen, Vanthoor, Melker, Wittmann, Rosenqvist, Muñoz, Foresti and Svendsen-Cook who had just improved to 10th. Jazeman Jaafar was now 11th (he had been struggling down in 16th), ahead of Daniel Abt (), an inexplicably slow Carlos Huertas (Carlin), Pipo Derani (Prema Powerteam), Jimmy Eriksson (Motopark) and Kimiya Sato (Motopark). And now only Jaafar was still out there, with the line drying fast. That accounted for his sudden surge up the order to 8th, but then his fun ended as the rest of the pack re-emerged to play. The changes now came thick and fast with Svendsen-Cook initially getting the drop on the others and up to 6th, while Vanthoor was 3rd and Melker grabbed pole. Foresti improved to 5th, dragging Derani with him, and then a lap later Svensen-Cook was fastest of all, or at least he was for about 20 seconds before he got demoted by Rosenqvist. Magnussen moved into 2nd and Juncadella upped the pace still further. However, there was no denying Merhi as the Spaniard seemed to have the answer to whatever they could throw at him. It was beginning to look increasingly as if the last past the flag at the end of the session would prove fastest, or at least second fastest behind Merhi.

Foresti dropped back to 8th with Rosenqvist improving for 2nd and Magnussen a useful 4th. Juncadella then reclaimed the top slot but only for as long as it took for Merhi to cross the line again. However, just as they all readied themselves for the last couple of laps of the session, the red flags were hung out because Magnussen had managed to bin it at the Arie Luyendijk corner, requiring rescue. With 3 minutes and 57 seconds left on the clock, it seemed as if the provisional grid was now set. And so it proved. The restart only really left enough time for a single flying lap and as they’d all gone out together it was asking a bit much of anyone that they should go faster. Juncadella and Vanthoor both bailed out after their out laps, and the only improvement came from Huertas, who gained one place to go 15th at the flag instead of 16th. The order was Merhi, from Juncadella, Rosenqvist, Wittmann, Magnussen, Melker, Vanthoor, Svendsen-Cook, Abt and Foresti. 11th was Derani, from Jaafar Muñoz, Eriksson, Huertas, and Sato who was the one to lose out to Huertas. It remained to be seen whether anyone could do anything to stop Merhi in the second session, held late in the afternoon, although Merhi did his best to stop himself by crashing on what would have been his last timed lap when the car became unsettled after he lost downforce while running just behind Rosenqvist.

As it turned out there was very little anyone could do because the weather was not on their side. The second session saw a delayed start but it was still too wet to make any difference. The only thing the session did provide was a pointer to what may happen tomorrow if the weather continues in this hideously unseasonal vein, with Merhi setting the best times of the session for most of the half hour, but with Magnussen and Wittmann running him reasonably close until the closing minutes. However, the times were all a good 20 seconds slower than in the morning so it was all pretty academic. Perhaps one of them will be able to challenge the Euroseries leader tomorrow, perhaps not. He’s going to take some stopping; that much is clear. Although it had no effect on the grid, the order in the second session was Wittmann, from Merhi, Magnussen, Abt Foresti, Juncadella, Rosenqvist, Muñoz, Melker and Vanthoor. 11th was Derani, from Eriksson, Svendsen-Cook, Sato, Jaafar and Huertas. Just for good measure this session was also hit with a red flag after Foresti flung himself off at Hugenholz with less than 3 minutes on the clock and at the restart Svendsen-Cook flung himself off as well. It wasn’t boding at all well for the British Series runners if this afternoon was anything to go by. 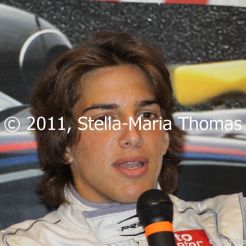 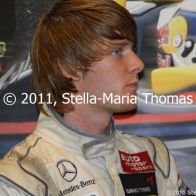 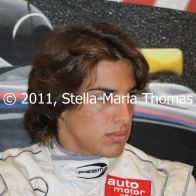 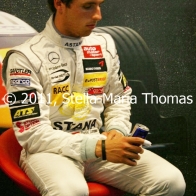 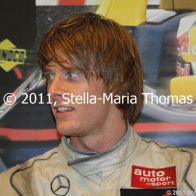 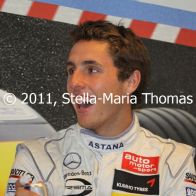 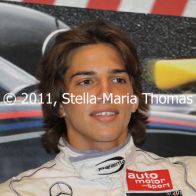 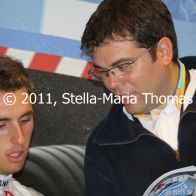 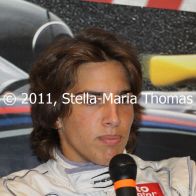 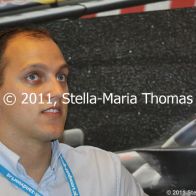 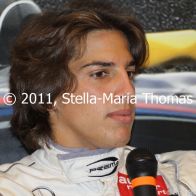 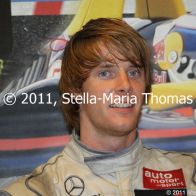 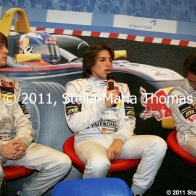 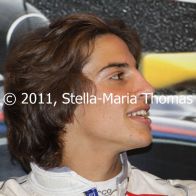 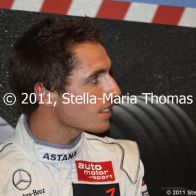 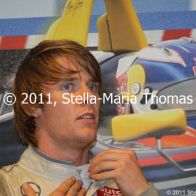 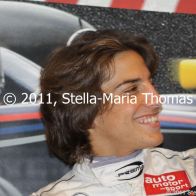 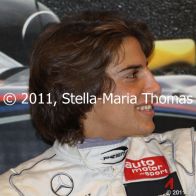