Another good night’s sleep and I was starting to feel altogether more human – amazing! Who knew the best way to avoid jetlag was to stay awake for 37 hours straight then switch to local time immediately on arrival?!

Anyway we opted for a trip over to Coloane this time, just to potter about a bit and see some of the older buildings. And coincidentally get an egg tart at Lord Stow’s while we were there.

We figured the best way to do that was to snag the hotel shuttle bus down to the jetfoil terminal, then pick up one of the free shuttles to the Venetian over on Taipa, from where we could get a bus the rest of the way for the princely sum of $5.00HKG, about 0.40p each! So we did just that, fetching up at the roundabout right by Lord Stow’s and coincidentally by the street where the splendid Espace Lisboa sits in what is basically a two-up two-down house with a tiny balcony which serves up solid Macanese/Portuguese food in large and tasty portions. We popped in to book a table for the evening, asking if they could put us out on the balcony if the weather stayed fine. Then we swung by the bakery to buy iced coffees and an egg custard tart each (rather than a “tat”). 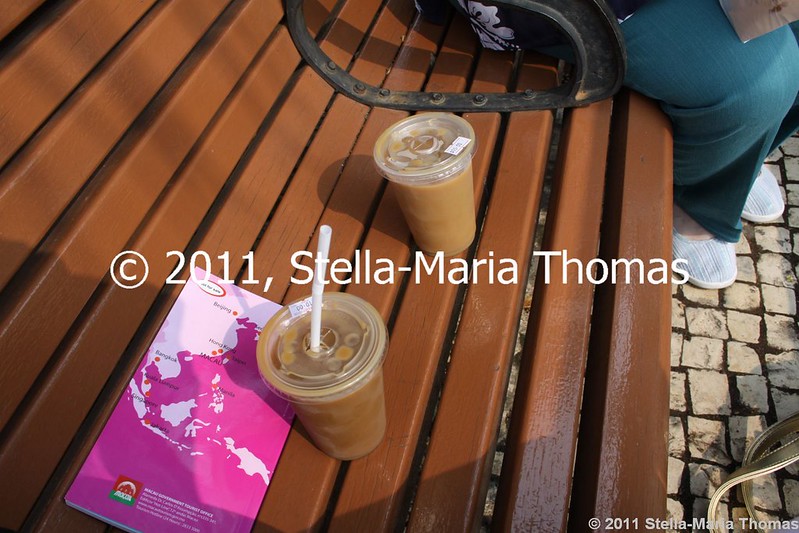 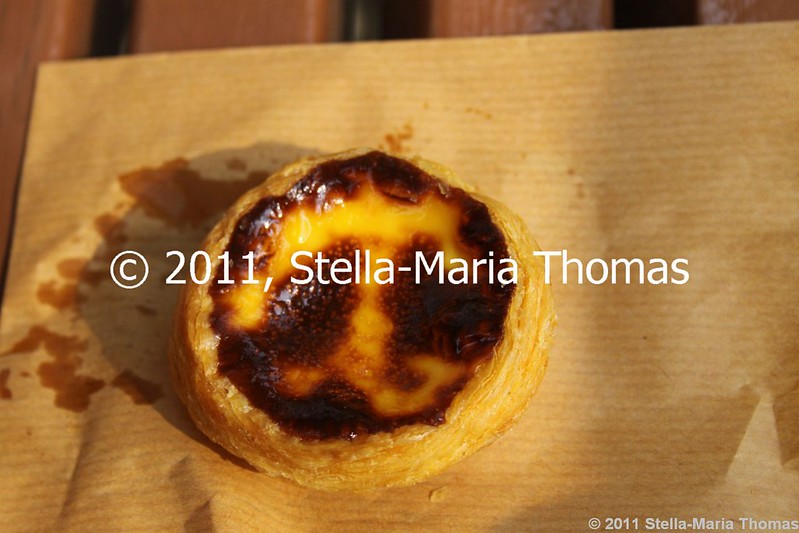 We mooched over to the riverside and sat eating what was in effect our lunch for the day, while watching the egrets and cormorants hanging around and the junks and sampans and passenger ferries skittering around in the wake of giant container ships, presumably hauling exports none of us can afford anymore to the waiting world. 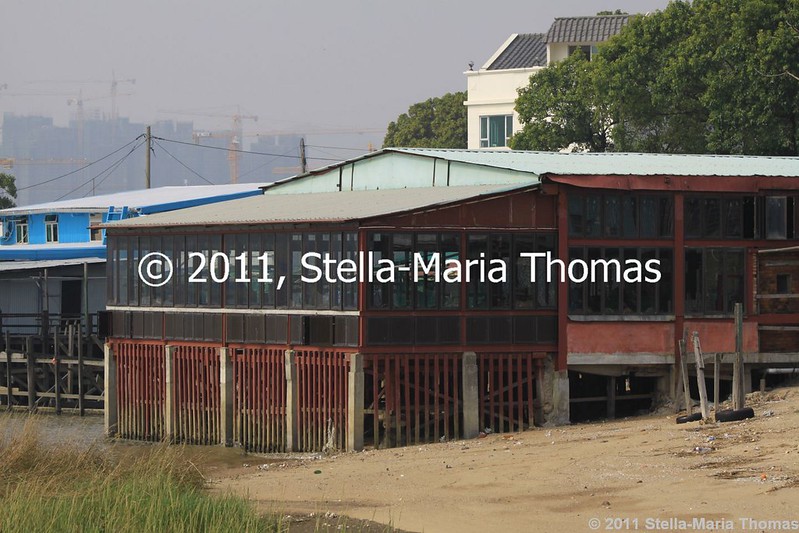 After that we simply wandered, looking at the colourful display in the greengrocers just off the square, pondering the odd signs identifying the ficus trees (and seemingly ONLY the ficus trees) and eventually ending up at the end of the waterfront where a small and very bijou temple, the temple of Tam Kung Miu, dedicated to Tam Kung, a Taoist god of seafarers, which – perhaps not surprisingly – stands overlooking the Pearl River. Again, we’d never seen it before because we’d never got quite that far before… 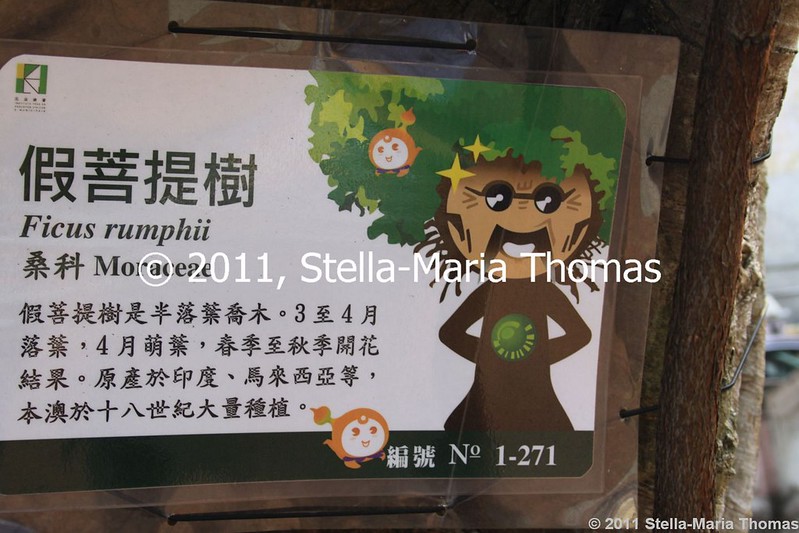 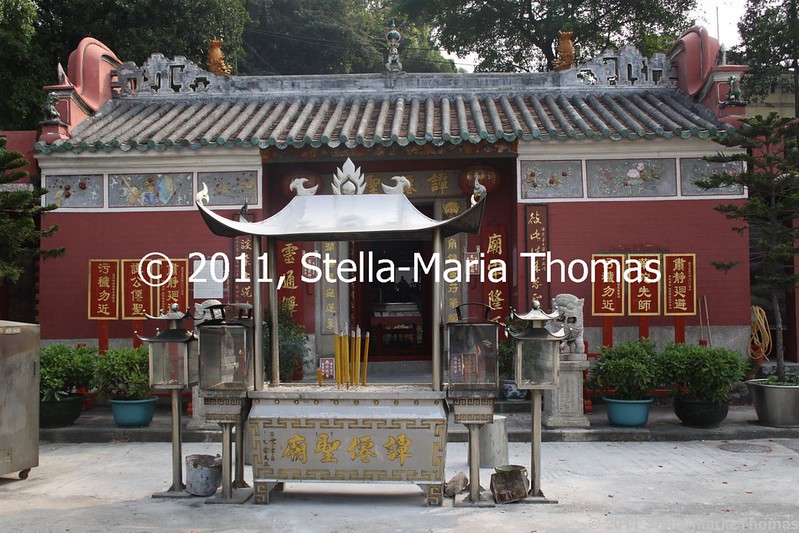 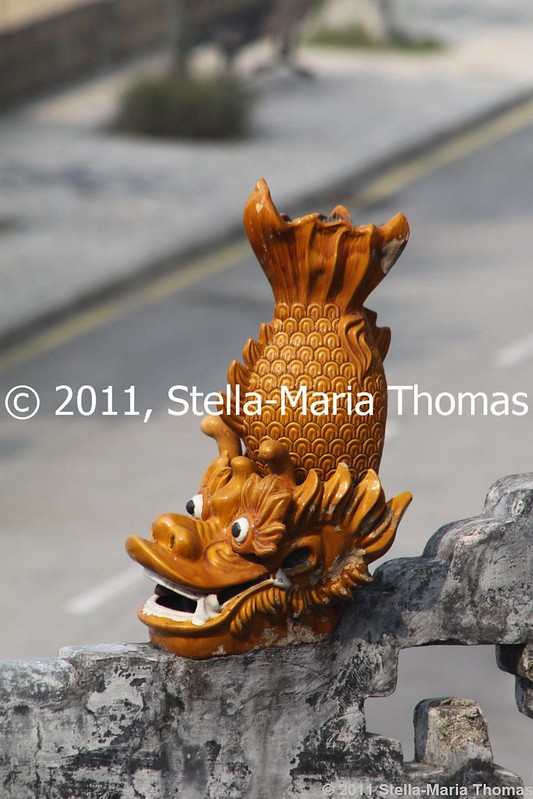 There were also some intriguing buildings down on the waterfront, and it’s hard to know how old they might be. Some had a bit of an art deco look but could just as easily be recent. Some, on the other hand, are clearly far older. 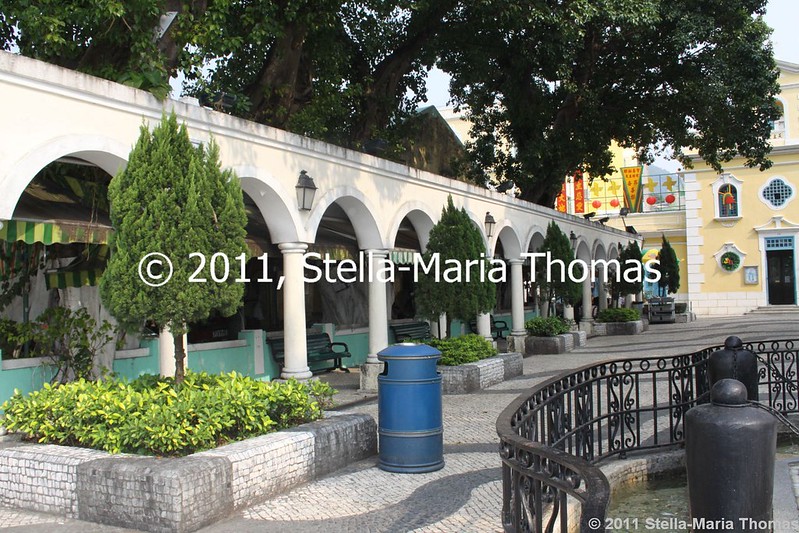 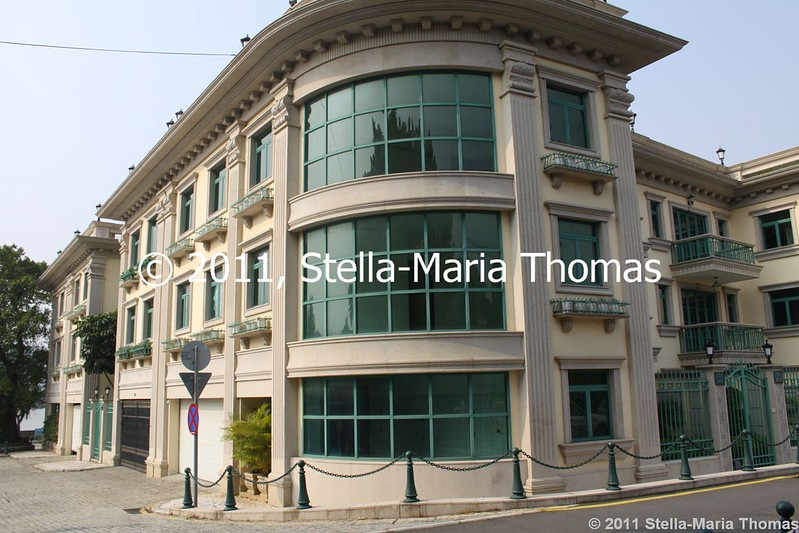 From the square, where there is a fountain and a monument commemorating the defeat of a pirate attack in 1910, we took a look into the tiny Chapel of St. Francis Xavier, which dates from 1928 and is rather oddly over-decorated for its scale, though not in an unattractive way. 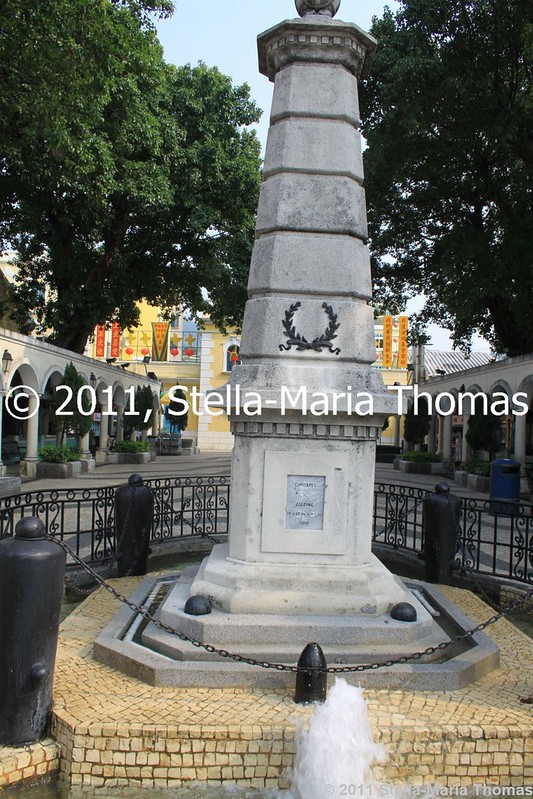 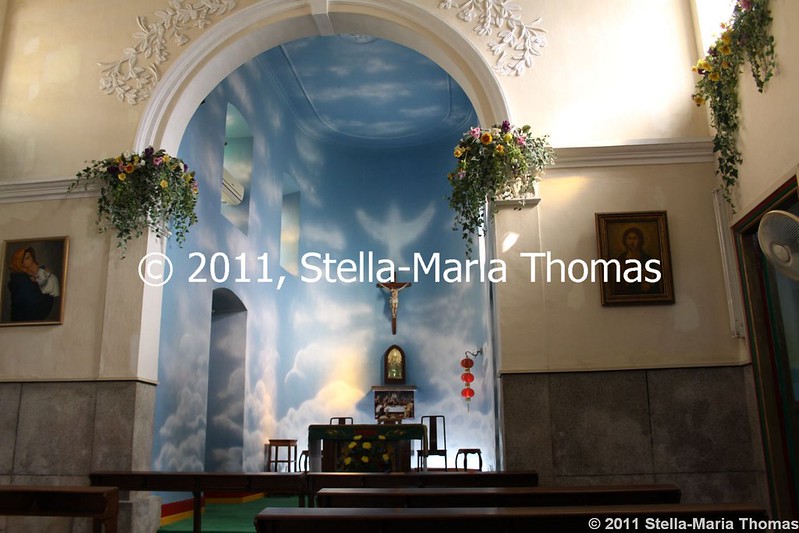 It was getting hotter and stickier and the afternoon was wearing on, so we walked back to the bus stop and investigated to see if we could get back to the ferry terminal directly. It didn’t appear to be possible, so we caught the bus back to the Venetian, walked through to the shuttle bus departure terminal and rode back that way. 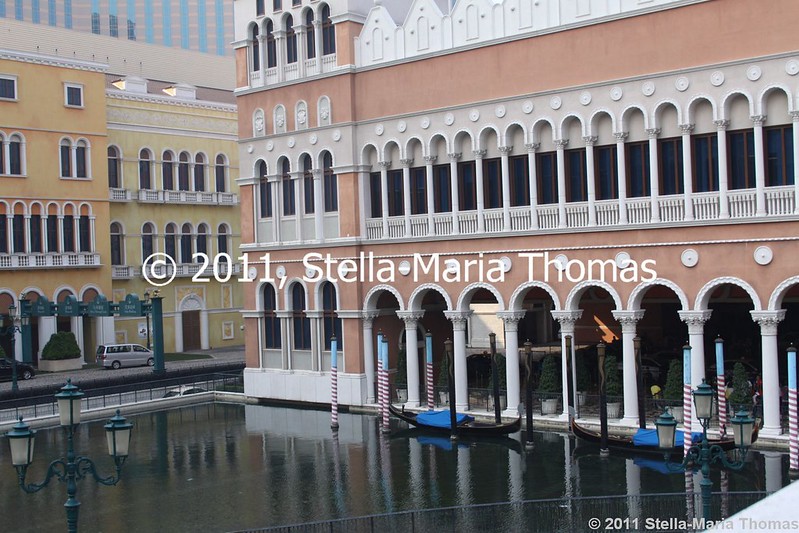 We needed to call in at the paddock to collect our passes for the weekend, reserve our desk and sort our locker out so that seemed like the best way. Anyway, we got ourselves organised, sorted ourselves out to return to the hotel and found we couldn’t get a taxi. So we walked… It’s not too bad a walk until you hit the last bit where the side road that leads to the pousada slopes up towards the top of the hill. The last bit is painfully steep if you’re dragging half a ton of kit but at least we weren’t this time, just a camera each and a few bits and pieces.

In the evening we left early to make sure our table didn’t get given away and were joined in reasonably good order by the Hulses, and the five of us squeezed onto a balcony table to study the menu. The decision for Lynne and I was easy. There must be casquinha as Macau is now about the only place we can get it – our late, lamented stomping ground Sabor do Brasil used to produce a mighty fine version, but now that Alberina has retired we have to get our fix of baked, stuffed crab wherever we can. 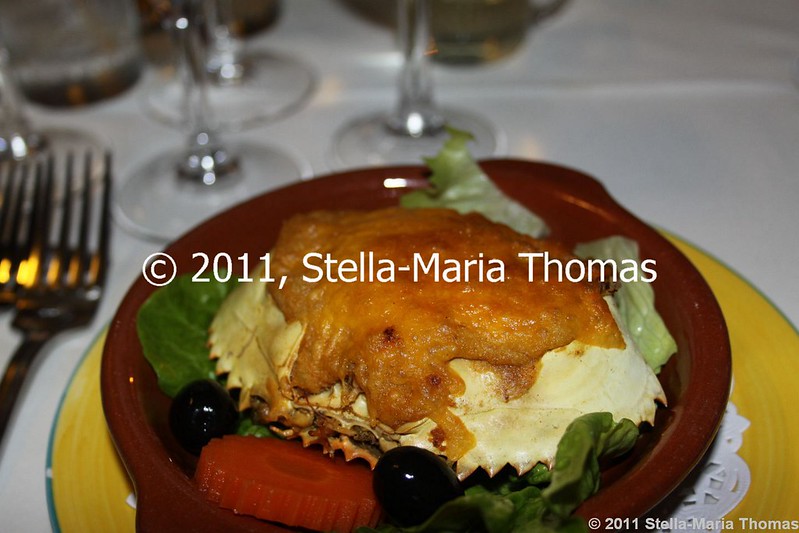 Afterwards there was a stupendous crab curry. a massive burbling pot full of pieces of meaty crab in a deep yellow curry sauce – we dug in and broke into all the best bits – and ended up with yellow stained fingers for two days afterwards to prove it! Even nail varnish remover couldn’t shift it. It didn’t matter. It was soooo good. It must have been because Lynne hates having to handle food with her bare hands but it didn’t stop her! 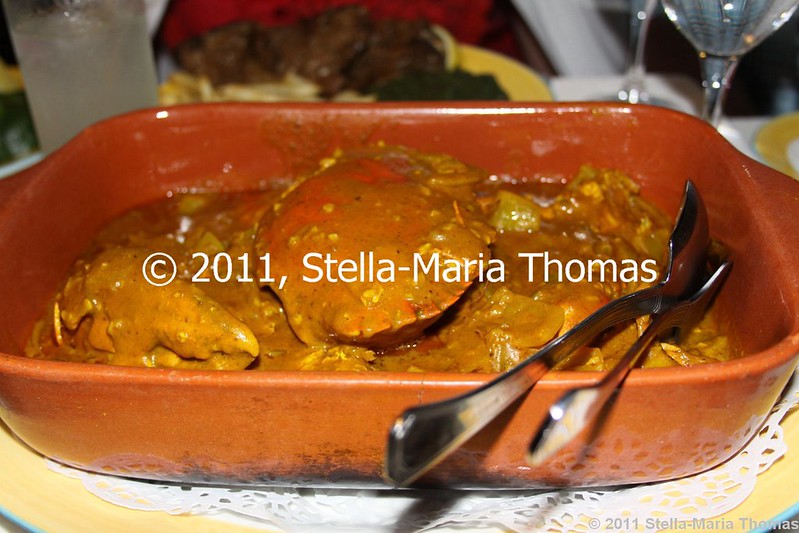 By the time we were finished there was no possibility of pudding – all we wanted to do was head back to the hotel and to bed. Rather than getting a cab all the way out there in the sticks we once again caught a bus to the Venetian and from there easily got a taxi back to the pousada, headed for oblivion for the night.