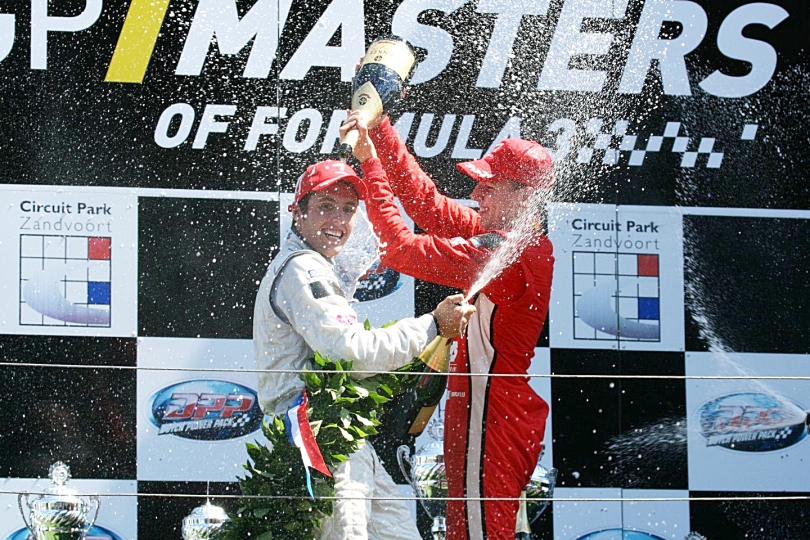 Race Report: At Zandvoort today, in front of a 26,500 strong crowd, Daniel Juncadella (Prema Powerteam) settled a score with this event by claiming a lights to flag victory by a comfortable margin from his team-mate Raffaele Marciello, while local hero Hannes van Asseldonk (Fortec Motorsport) pulled off an audacious move to secure the third step of the podium. This year’s Nations Cup went to the Spanish in the shape of Juncadella and fourth-placed Carlos Sainz Jr (Carlin), while the Invitation Class was claimed by debutant Josh Webster (T-Sport) in an impressive first F3 outing.

After a rain-sodden morning there was a great deal of weather-related nervousness in the pitlane and paddock but as it turned out no one need have concerned themselves. By the time the pitlane opened, the sky was blue and the sun was shining and it looked set to stay that way for at least the duration of the race if not the rest of the day.

As the lights went out and the race got underway there was some residual dampness, mainly on the corners, but there was never any question as to whether slicks were the way to go in terms of tyre choice. Juncadella took off like a rocket at the start, and it was all Marciello could do to stay with him, while Sainz Jr, who started 2nd, made a textbook get away but who found himself passed by both Marciello and van Asseldonk, who tucked into the Carlin driver’s slipstream before simply driving around the outside of his rival at Tarzan to steal third from the by now almightily annoyed Spaniard.

In the pack there was a small reshuffle as Felix Serralles (Fortec Motorsport) was seen to be going backwards through Tarzan at a rate that suggested some sort of mechanical issue and he would eventually vanish altogether to be seen later returning along the path on the outside of the Tarzan corner, while Sandro Zeller (Jo Zeller Racing) was struck by a gearbox problem, failed to exit the pits before the start, and didn’t join in until the race was already a lap old.

At the front Juncadella was keeping a watchful eye on Marciello but would eventually manage to open a gap to his team-mate and would spend the rest of the 25-lap race in front and untroubled. Which was not a state that van Asseldonk was to experience; having got over his surprise at being passed on lap one, Sainz Jr was soon back on the Fortec car’s rear wing and in an aggressive frame of mind – and he would stay there for the rest of the race.

In the pack there was a degree of mayhem too. Felix Rosenqvist (Mücke Motorsport) was back in 8th after the start and was having to work remarkably hard to hold off Sven Müller (Prema Powerteam). He wasn’t helped when the two of them gradually reeled in a three-car scrap ahead of them in the shape of William Buller (Carlin), Alex Lynn (Fortec Motorsport) and Michael Lewis (Prema Powerteam). While Juncadella continued to lead comfortably, and Marciello failed to find an answer to his team-mate’s speed, and Sainz Jr snapped and snarled behind van Asseldonk, the now five car train began to look increasingly like an accident in search of a suitable location.

When the five of them were also joined by Pipo Derani (Fortec Motorsport) it provided one of the more entertaining features of what was a rather processional race, and they ran in close formation from lap 11 all the way through till lap 19 when they finally split apart, possibly as a result of some sort of centrifugal force effect, it was only because Buller and Lynn managed to break away, leaving Lewis and Muller sandwiching Rosenqvist in a skittering trio, while Derani maintained a safe distance and waited for a mistake that never came.

There were a couple of other battles of note, most notably perhaps the one that started when Conor Daly (Double R Racing) and Dennis van de Laar (Carlin) came up behind Luis Sá Silva (Angolan Racing Team) and found him to be rather difficult to pass. Eventually van de Laar used his local knowledge to barge past the Angolan to claim 15th. That left Daly, who was new to both F3 and the circuit, to try whatever he could to follow the Carlin car through. And so it was that for lap after lap Daly repeatedly tried to pin a move on Sa Silva only to find the door closed firmly in his face. It was becoming increasingly desperate and although Daly looked to be the faster of the two it was lap 22 before he was able to make a move that would actually stick.

Coming into Tarzan once more, Daly moved to the inside and was able to pull alongside, thus preventing Sa Silva from blocking him. Taken by surprise, the Angolan promptly went off into the Tarzan gravel. When the dust settled he was still facing vaguely the right way but he then stalled the engine and had to be rescued by the marshals. Daly, meanwhile, was through and long gone, probably breathing a sigh of relief. Luckily for all involved, the car was easy to move and it didn’t even inconvenience the next man through, Webster, who was now comfortably ahead of Richard “Spike” Goddard (T-Sport) and running well inside the times Zeller, the only other Invitation Class man, could manage.

Van de Laar, meanwhile, had set off in hot pursuit of Andrea Roda (Jo Zeller Racing), and once again it required a large amount of guile and determination for him to get past the Italian. Finally, on lap 16, with nine left to go, van de Laar made it through for 13th and from there on he had a very quiet few laps to the flag, untroubled by anyone behind him but not quite able to reel in Geoff Uhrhane (Double R Racing) for 12th. It was a decent enough debut and we may well see him again in F3 soon.

Elsewhere, as the race wore on, Sainz continued to harry van Asseldonk for all he was worth, locking the wheels up regularly and arriving at Tarzan in clouds of tyre smoke more than once. He finally had a really serious go at the Dutchman on lap 17, but it didn’t matter what he did, van Asseldonk wasn’t about to let a podium place escape him, no matter how determined the attack. Eventually the Spaniard had no choice but to accept that fourth was the best he was going to get today. He didn’t have to like it – and he obviously didn’t – but there was nothing to be done.

And as far as excitement went, that was it. On lap 20 Zeller quit the race, having been lapped by most of the field, while Goddard was also lapped by Juncadella and Marciello in the closing stages. The massed crowd, meanwhile, applauded Juncadella, the first Spaniard ever to win this event, as he came home to a well-deserved victory that went some way towards making up for having been knocked out on the first lap last year – by his own team-mate no less – having qualified on the front row. Marciello was a somewhat disappointed 2nd, and van Asseldonk was delighted with 3rd. 4th, as mentioned, was Sainz, while in 5th was Pascal Werhlein (Mücke Motorsport), the German having a very quiet run from lights to flag. Buller hung onto 6th, from Lynn, while Lewis held Rosenqvist off all the way to the flag and Muller was 10th. 11th place went to Derani, from Uhrhane, van de Laar, Roda, Daly, Webster in Invitation Class winning form and Goddard, 1 lap down at the end.

Fastest lap of the race went to Juncadella and the Nations Cup was claimed by Spain.