A comprehensive repacking of the car was needed, because today we would be moving on, back to Pau for the Historic Grand Prix, by way of the vineyards we’d visited on Wednesday, but with a stop off in Bordeaux so we could see more of la Cité du Vin, and R could see it for the first time. We had located the park and ride nearest to the museum (three stops away) and were soon on the tram (Tram B this time) on the way in.

As it turned out we probably ought to have checked the opening times before we set off, because we arrived a little before 9:30 and the place only opens at 10:00. It didn’t matter. It was a nice day, the sun was up, and there were things to take photos of including the odd “Alice in Wonderland” inspired artwork on the other side of the road.

We were now on the edge of the Bacalan district, which is at the northern end of the bend that gives the city the name of port de la Lune, and which used to be marshland, as so much of the region was. In the 17th century Dutch engineers came in and drained the land, making way for holiday homes for the rich, as well as for factories, refineries, shipyards, docks and dry docks. It’s described by the Tourist Information office as “a working class district that still retains a village atmosphere and physical reminders of its background, such as the bains-douches dating from 1937”. It certainly gave that impression from the tram, with some small but well kept streets, and tiny, utilitarian shops dotted among the houses. It’s also on the edge of the submarine base built by the Germans between 1941-1943. The base, which we didn’t have time to visit, is now an “underground” cultural location (literally) with exhibitions, concerts, opera, jazz, theatre, and dance taking place regularly. 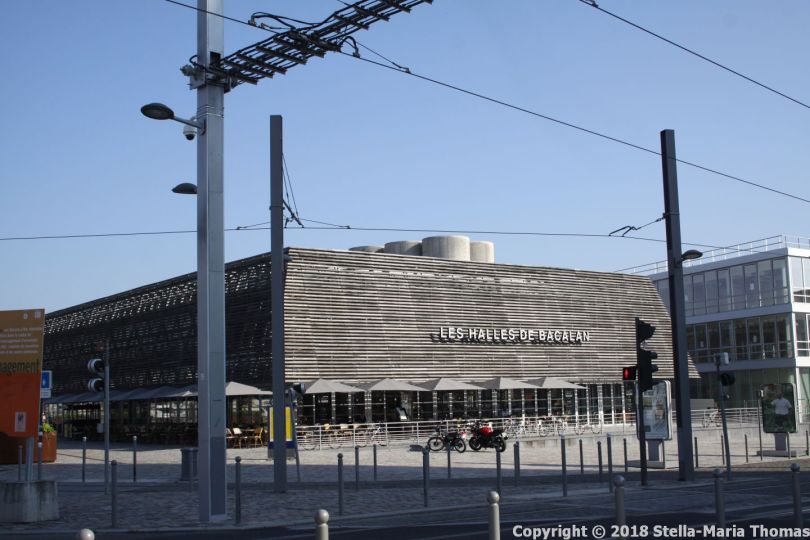 We dived into les Halles de Bacalan and ordered coffee, sitting outside in the sun while we waited for opening time. We arranged with R that we would meet him in the Belvedere at 11:45, and set off to investigate the areas of the permanent exhibition that we hadn’t managed to get round on the previous visit. Again we failed to see every thing, but then we only had an hour and a half. We did get round the section on wine through history, which was fascinating, and another on advertising and the development of the industry’s public faces. It was all very interesting and informative, but again if we wanted to be thorough – and we did – we were going to run out of time.

At 11:30 we headed down to the shop, Latitude20, where we wandered about among the 14,000 bottles of around 800 wines from more than 70 countries, looking for half a dozen to buy. The assistant packed them up in 3-bottle packs for us, to make it easy to carry them back to the car, and then we caught the lift to the Belvedere to taste a different wine each.

It was midday when we finished up there, so we decided to try the restaurant on the 7th floor for lunch. The Restaurant Le 7 is a modern, open space with views of the city and the river, and was beautifully sunny but cool when we sat down. They brought us glasses of Jurançon molleux for aperitifs while we had a think about what to eat. 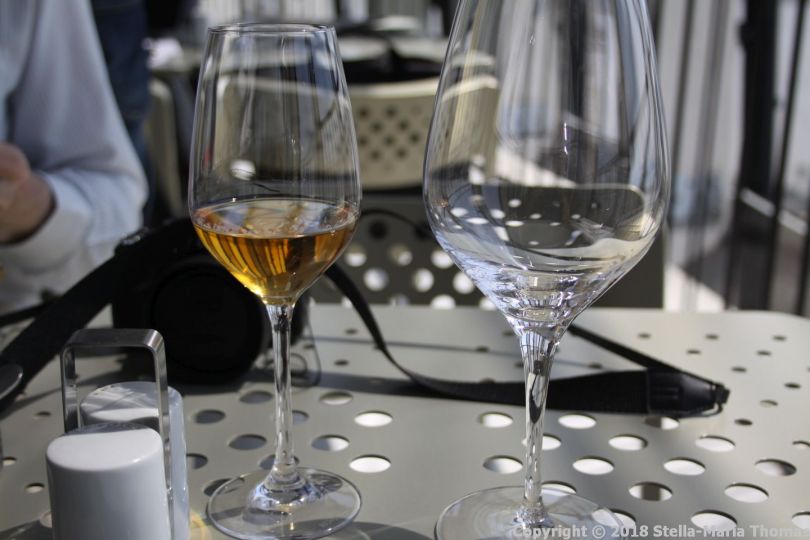 Bread rolls, butter and amuse bouches arrived pretty much simultaneously, the latter a little prawn and goats cheese affair that was fresh and cool and nicely fishy. 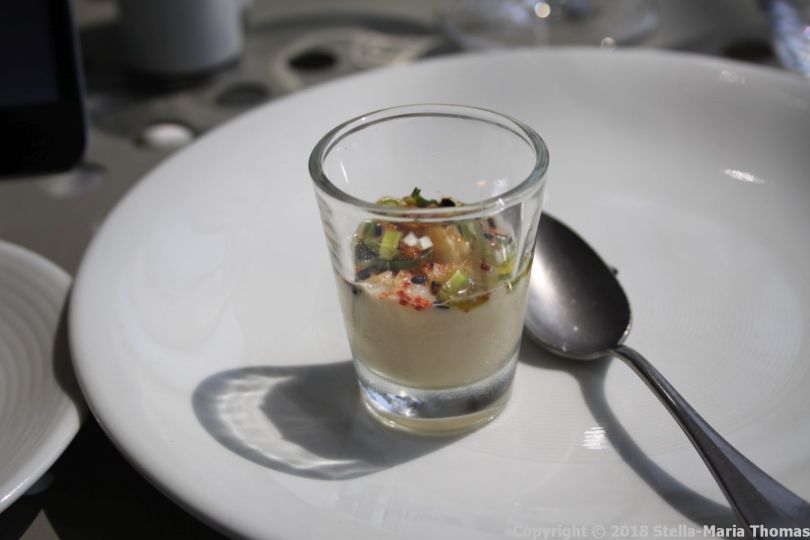 For the first time on the trip we moved away from local wines and ordered a bottle of Provençal rosé, la Croix du Prieur 2016. It was summer, after all, and I can never not associate Provençal rosés with sunshine, eating out doors and generally being content and comfortable. My 3.5 years in those parts have affected me in many way, pretty much all of them good.

And so to lunch. I ordered the beef tartare, and very nice it was. I do have something of an addiction to this and other such items as sweetbreads when I’m in France, even though I would never normally order in the UK, mostly for fear that they would be poorly done, or would use poor quality ingredients. This was none of those things, and slipped down easily.

The other two ordered the fish (stone bass again), with textures of peas, ricotta tortellini, pine nuts and marjoram foam. It too was good, and was enjoyed even by the non-pea eater among us. 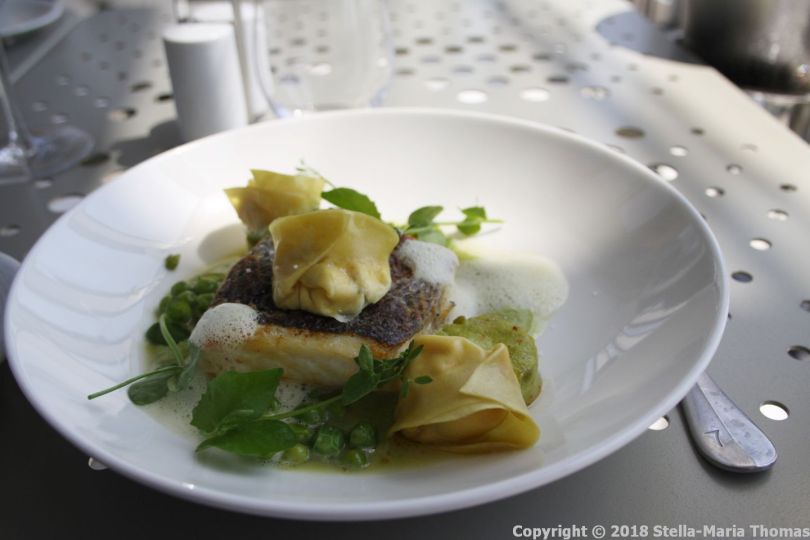 We turned down desserts, but they still brought us a load of white chocolate with little crunchy bubbles through it, a sort of sophisticated Malteser. Very nice, and thankfully not that filling.

We paid the bill, picked up our shopping, and headed back to the car. A detour to Chateau du Tailhas and Chateau Grangey followed, with cases of the wines we tasted on Wednesday bought in both places. Both of the owners seemed somewhat surprised to see us, promises to return apparently often turning out to be not worth the paper they’re written on. We don’t do that. If we say we’ll do something, then we do it.

The result was a somewhat cross country journey down to Pau, eventually getting back on the autoroute halfway between Bordeaux and Pau and making it there by around 17:30. This time we were not about to be fooled by the sign-posting and we reached the lovely, cool, secure underground car park at Place Georges Clemenceau without too much difficulty. The Hotel le Bourbon was ready and waiting for us, and we soon unpacked the current batch of bags and got organised ready for dinner. R was not so lucky as his luggage was with E and W and they were running somewhat later than we’d expected, largely due to a failure of communication on my part. It meant he could shower, but clean clothes were not an option. Oh well!

We headed of back down the Rue du Hédas where this time we were due to dine at Chez Canaille, a bistro serving what they describe as tradtional French cooking on this pedestrianised street. First we took a seat out on the pavement for aperitifs.

We had some very moreish nibbles with it, a bowl full of mixed nuts and dried fruits, that I found hard to resist. We were asked if wanted to eat outside or in, and as it was starting to cloud over and look a bit threatening, we moved back inside. It’s very rustic inside, all gingham and old chairs and tables, and it was also busy with a buzzing atmosphere. It seems to be very much a neighbourhood restaurant, and is none the worse for that. We ordered a local wine (of course we did), a rosé from Château Tariquet 2016 Côté de Gascogne IGP, made with Chardonnay and Sauvignon in equal measures. It went well with the starters, and should also go perfectly well with the mains, and if it didn’t we could order a red.

I was right about the starters at least. I had the egg cocotte, with smoked salmon and asparagus, the egg doused in a creamy sauce. It worked well with the wine. 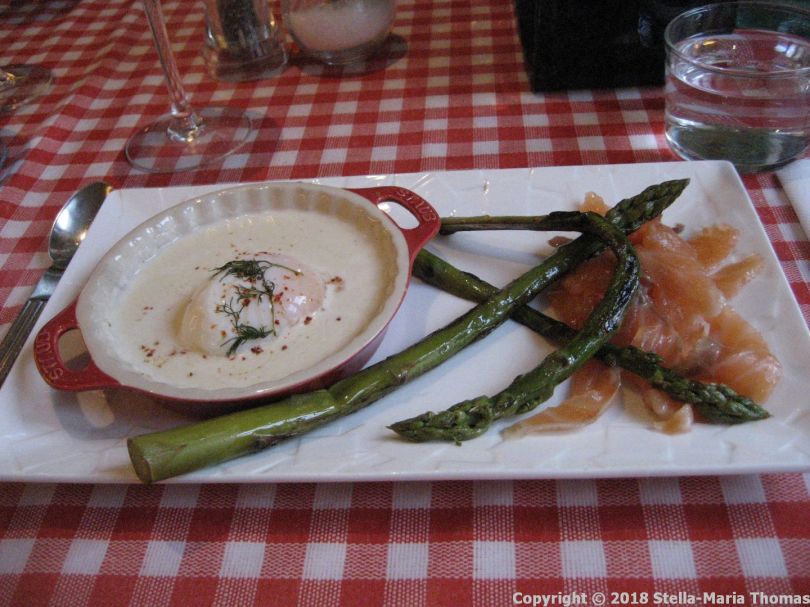 Lynne and R went for the tuna tataki, which was accompanied by a chopped fresh salad of cucumber, celery and radish. The piece I had was very good, tender and juicy and just cooked right. 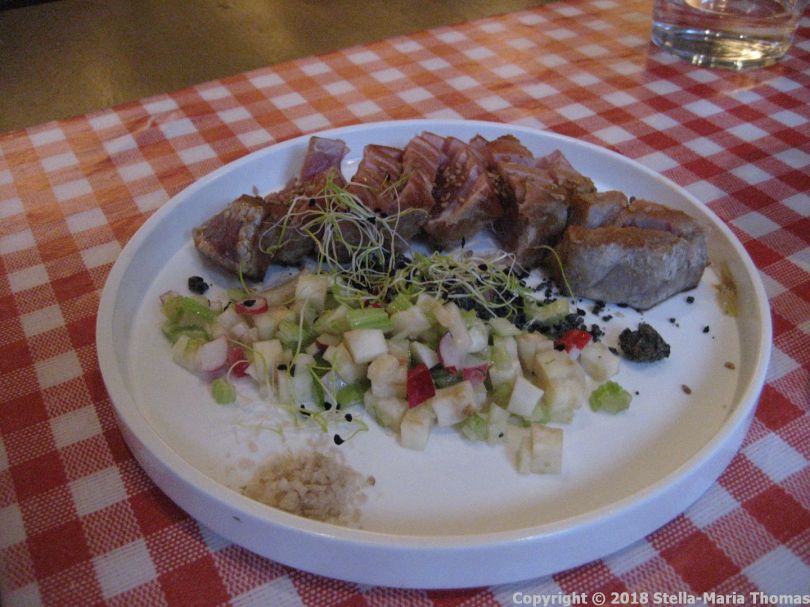 For main courses we all three had the pièces de bœuf which was massive (we could probably have managed with just one between three of us!) with what were listed as “belles frites” with persillade. Yes, the frites were good, though not as good as the ones in Le Bordeaux. Still, there were plenty of them and they were crispy enough.

Again, dessert was frankly impossible. After we’d finished it was back to the hotel, both one of our most basic and least expensive stays on this trip, where we found that the air-conditioning had finally been turned on, but unfortunately the Place Gourmande on the square in front of the hotel had not been turned off, making sleep impossible till around 2am! It’s convenient for the circuit, but if the use of the area for the food festival is going to be a permanent fixture, I would not recommend it. The festival was over on the boulevard last time, where it didn’t bother us, but this was a bit much, and we were much closer than we had been the previous weekend. 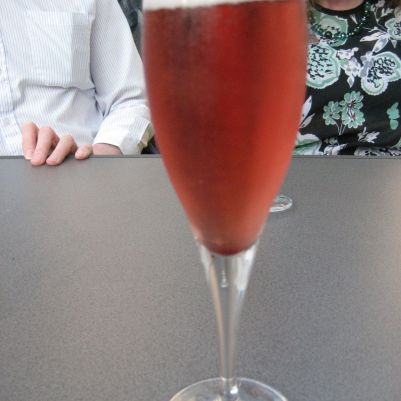 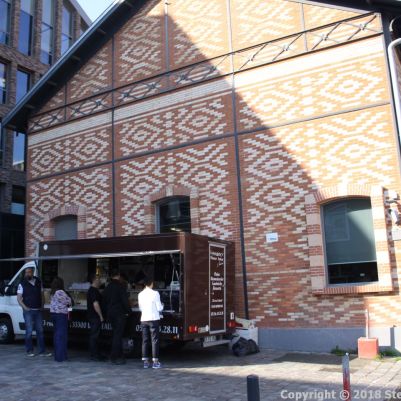 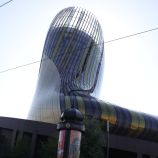 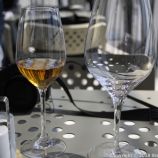 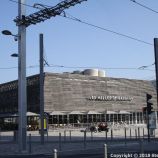 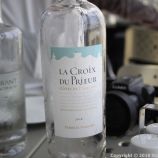 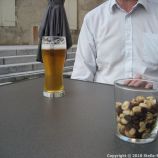 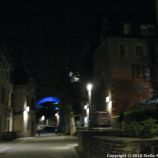 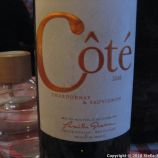 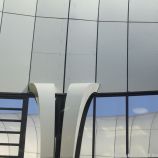 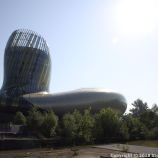 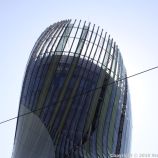