Sometimes, when doing other things, you blunder across something unexpected but welcome. Such was the case in Oxford the other weekend, when we went to a talk at Blackwell’s bookshop and then needed to find lunch afterwards. There was a place in Summertown that had looked good when we went past in the morning, but they had pretty much run out of food by the time we made it back there. Rounding a corner we blundered across Pompette. There were people inside, it was sunny and they had tables in the massive plate glass window area, so we wandered in, ate a plate of charcuterie and some croquettes and drank some wine in the sun. We also discovered they had an interestingly eclectic wine list, and in conversation with Matt, their sommelier, were informed that they were about to start a series of wine dinners, beginning on Thursday with an Alsace offering.

Diaries were checked, money was handed over and we had a reservation.

We arrived in Oxford around 40 minutes too early on the grounds that you never know what you’re going to encounter on the roads around the place at rush hour, and luckily they were already open. We settled in to have an aperitif and wait for the appointed hour of 6:30 to go through to the private dining room.We tried to get a couple of glasses of vin jaune, on the grounds that it’s rare to find it, especially by the glass. Unfortunately, they had sold out the night before! Instead, Matt suggested we might try the Moscato BianchiDùDùi, Vittorio, Piedmont, 2000, a genuinely intriguing prospect given that it was produced entirely by accident and presumably can never be achieved again. The wine started life as a 2000 Moscati d’Asti but got forgotten and ended up fermented to near-dryness, rendering it useless for the intended purpose. It was ignored and left in a concrete tank for 16 years, and all the while things were happening to it that no one could have predicted. It developed a layer of flor (which is an integral part of sherry making, at least for fino) and what resulted was a “nutty, saline” version of a dry Moscato. It was fantastically interesting, with a sherry-like edge but still fruity as well. I feel quite sad at the idea that there will never be any more of it after the 2000 vintage is all gone!

After that we hit the Crémant d’Alsace, as that would also be served at the start of the meal. This one, from Bruno Sorg in Eguisheim and was a very good iteration of something that is made by so many winemakers now. It’s described as “complex, toasty nose with citrus and mature apples” and I’m not going to disagree. It’s been aged on its lees for ling enough to give a very nice aftertaste of toast and biscuit and is apparently 50% Chardonnay with Pinot Blanc and Auxerrois completing the blend.

Once seated at the table, and with everyone present, things kicked off with a dish of Bibeleskaes (or Bibbalakaas  or even Bibeleskäse) an Alsatian fresh cheese dip, with lovely fresh. crunchy vegetables to dip into it, and bread if that wasn’t enough. It was excellently done, smooth, creamy, acidic and packed with the flavour of herbs and garlic. It was a very nice start to the evening and we were getting the impression that we were in very safe hands. Maybe it was because the chef’s parents were also among the guests, but I don’t think so! I think Pascal really is that good! 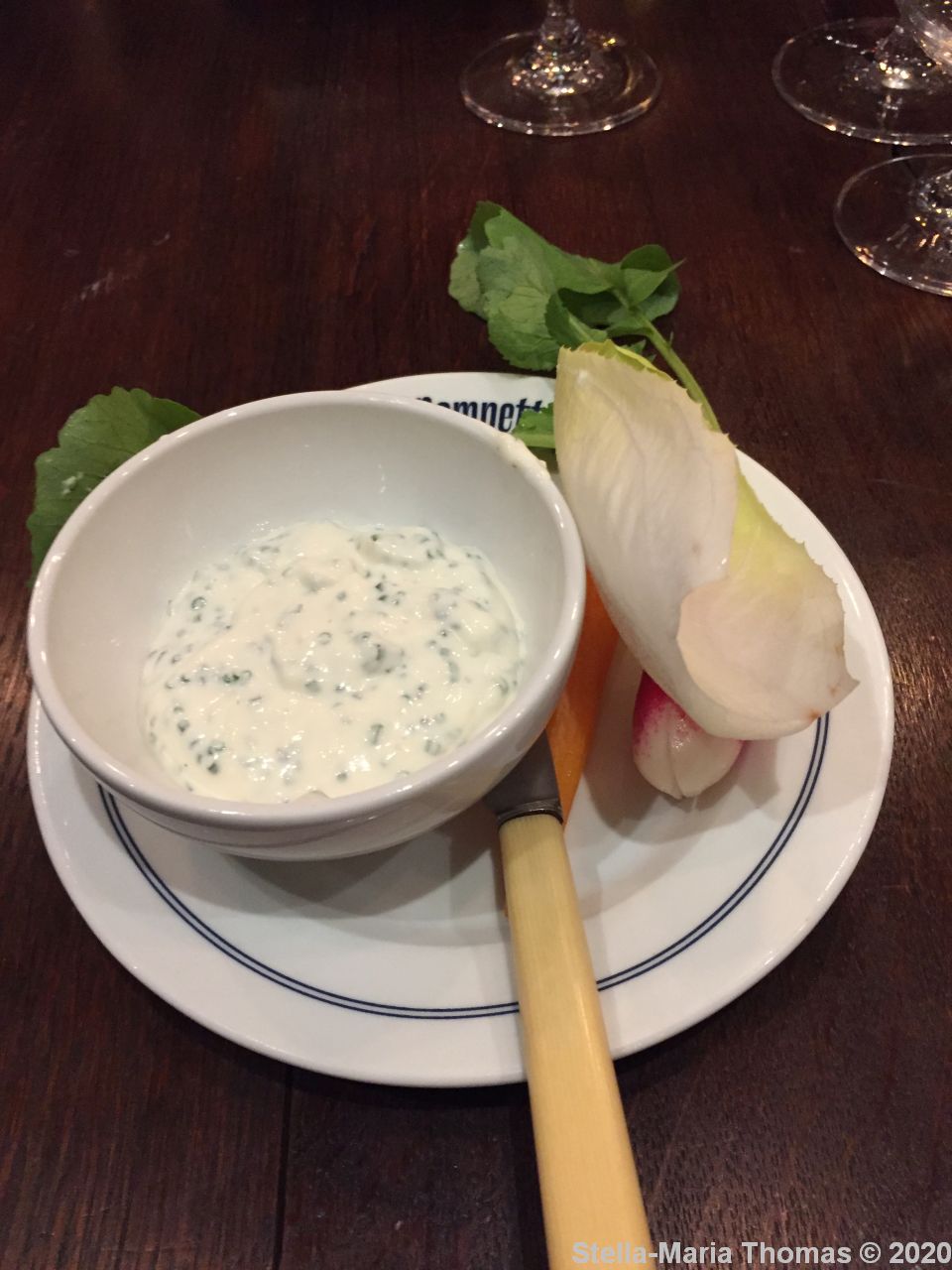 A refill of the crémant was much appreciated before we moved on to that classic dish of Alsace Lorraine, the quiche Lorraine. This was just listed as an onion tart, served with a mâche (or lambs lettuce if you’d rather) salad. The tart was excellent, with a good crisp pastry base, and a rich filling, with a golden and lightly crisp top, and it slipped down a treat. It was also reassuring to see that the portions were not too large, a problem when you know you have a fish and a meat course to come, and then cheese and dessert.

The accompanying Domaine Bott-Geyl, Alsace Métiss 2017 was also a good match, and Matt was proving most informative on the subject. This wine apparently used to be known as Gentil d’Alsace and is light and delicately fruity, made of a blend of grapes from a variety of growers, and containing both the expected (Riesling, Pinot Blanc) and the unexpected (Muscat, Chasselas which I would expect in Swizterland but not Alsace). We were also impressed by the generosity of our hosts for the evening. Quite often at wine dinners you get a carefully measure 125mls if you’re lucky and not a drop more – not here.

The fish course was up next and although it had been billed as river trout, what we got was sea trout, served with choucroute and a gorgeous Riesling butter sauce (in effect a beurre blanc) that was wonderfully mouth coating. The fish was just right, tender and flaking apart, and the choucroute merged gloriously with the sauce. It was way better than the “fish choucroute” I had in the Maison Rouge in Colmar, and means that I can now see the point of it!

The fish was accompanied by a glass of the wine that had been used to make the sauce, a classic, dry Riesling Tradition, Albert Mann, Wettolsheim, 2016 which was very enjoyable for us (though one of our dining companions wasn’t at all keen, not liking the “petrol” smell that you get with Rieslings as they age). Never mind, all the more for us!

The final “main” course was a somewhat less than elegant looking creation, but it certainly packed a punch taste-wise. It was a slow cooked (very slow cooked) pigs’ cheek that had been cooked in Pinot Noir, and that was served on a delightful mixed bed of chestnuts, mushrooms and buttery spätzle. It was a lovely, lovely thing, a massive all-enveloping hug of a dish. I imagine it would be just the thing if you’d been working flat out in the vineyards all day; perhaps less fortuitously, I’d not even managed to get out for a run, the weather had been so appalling, and had spent my day sitting down. I still made a good fist of it, and was able to finish off everything that was in front of me.

The 2016 Pinot Noir, Steiner, Pfaffenheim, from Pierre Frick slipped down a treat with it, a red fruit treat with just enough acidity to counteract the fat in the dish. It was another well chosen wine from what looks to be an extremely well chosen list.

Next we had a portion of cheese, a piece of Munster fermier which I loved. Some people really didn’t, and I’m not sure whether it was the sheer strength of the aroma, or the cumin seeds with it, or even the sharply acidic taste. It’s clearly a “marmite” cheese and it definitely divided opinion around the table, but we both happily polished ours off. 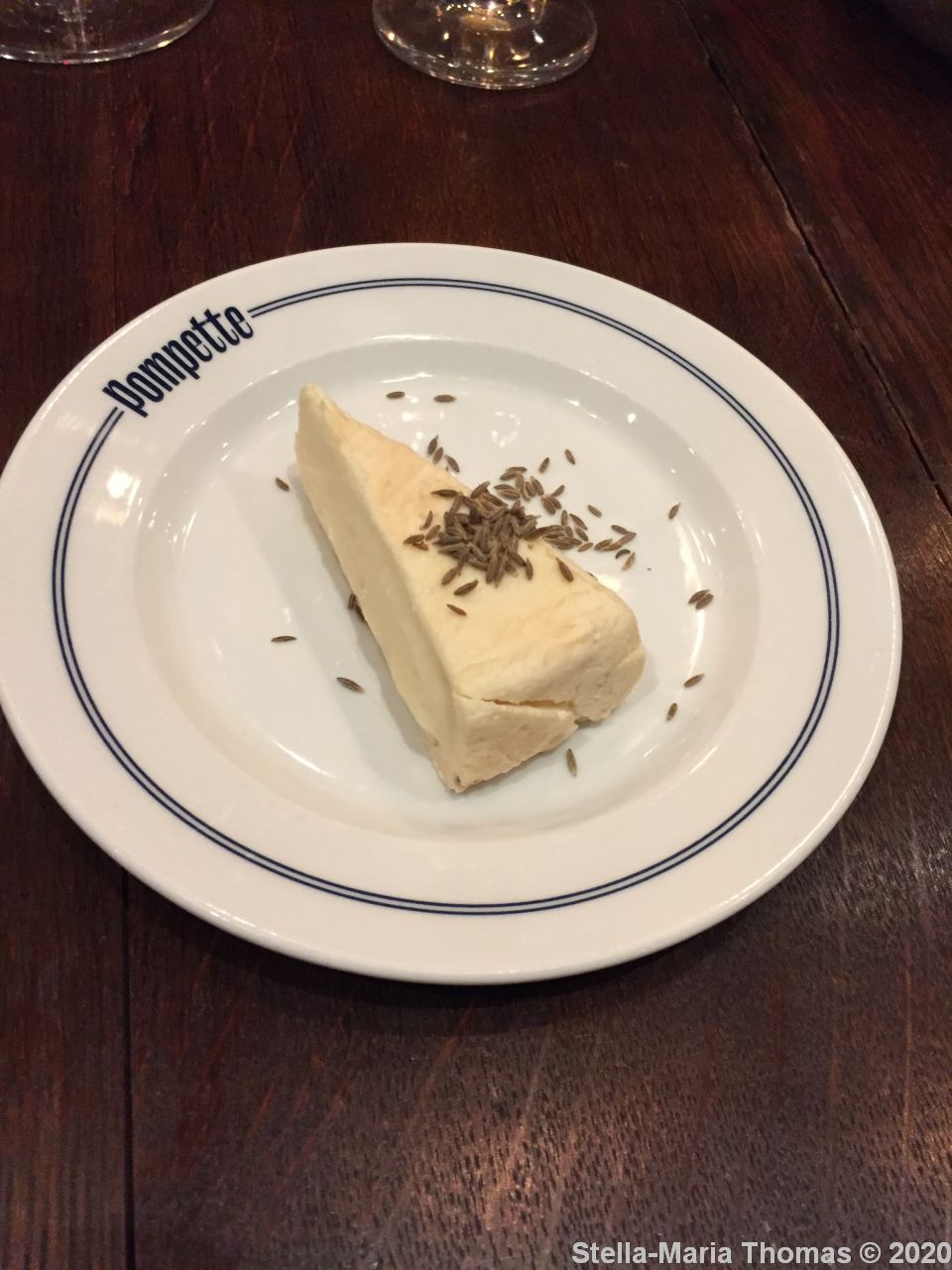 We swapped from wine to an Alsace beer for this course, the newly-acquired as a supplier Meteor beer. It was very fruity, very good and again went well with the food it was intended to enhance. Beyond it being beer and it’s name, I have nothing else for you and would suggest if you’re in Oxford you can do your own research.

The last course was an expertly judged poached pear with crème Anglaise and a pain d’epice crumb, that was sweet and crunchy and lifted the dish from something good to something spectacular. It was accompanied by an extremely good wine, but also a fierce shot of poire William eau-de-vie which left us wishing we weren’t the only people without a B&B close by. We would have to get home afterwards… 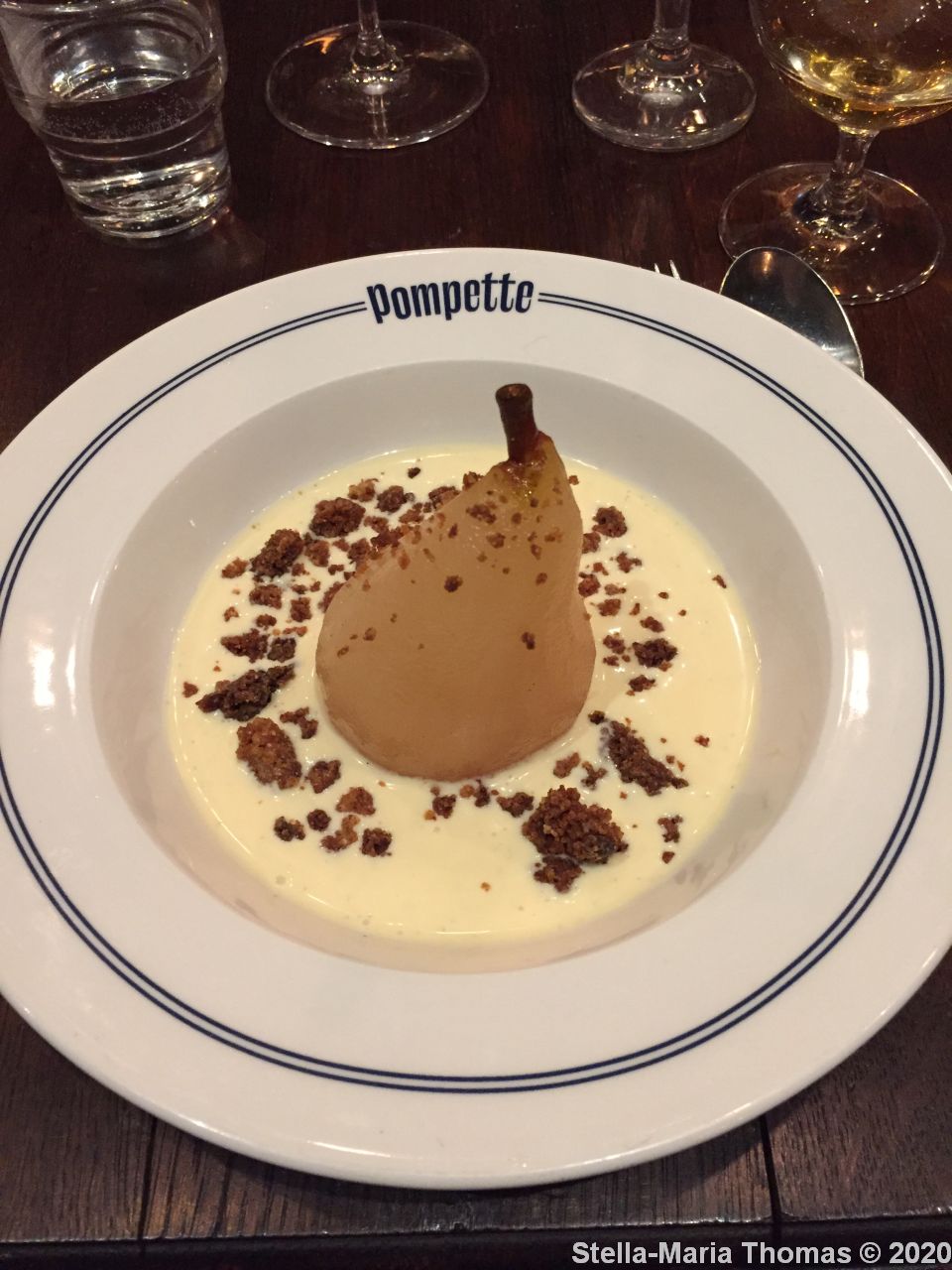 The extremely good wine was a 20 year old Gewurtztraminer Grand Cru Vendanges Tardives, Gilg that was right up my street. After we’d finished that, Pascal came to see how we’d enjoyed the food. Personally the only thing I would have changed was the speed of service, which was probably about five minutes too fast for me. I was interested later to find that he’d started his cooking career in a London restaurant, Terroirs, that we have been to in the past. They specialise in really good wines, so I can see why Pascal and his wife, Laura, have made sure they have a sommelier with good levels of knowledge on hand to complement his food. The next evening is dedicated to sherry and we are looking forward to it immensely. 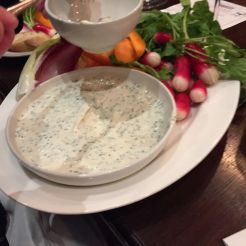 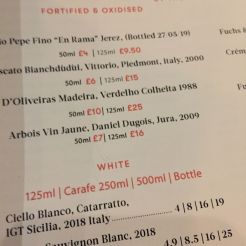 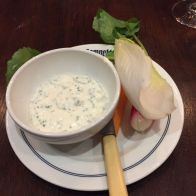