Another month, another cookbook (I really hope they’re going to choose one I really don’t want to buy one of these months) from the people at The Great British Chefs website. The deal is you get the book, you cook from it and you report back on your experiences with the recipes. Sometimes, as with a couple of recent books, you find that the author engages with the community, which can be both a lot of fun and very useful if the odd error has crept in to the text or something doesn’t make sense for some reason. This was not one of those books, but it was very enjoyable to cook from. I just wish I’d had a bit more time to dig around in it. As it was, I’d happily cook any of the recipes I tried again – and in fact have with the potatoes.

So the book in question? “Falastin: A Cookbook” by Sami Tamimi and Tara Wigley, a wonderful introduction to the cuisine of Palastine (there’s apparently no letter “p” in Arabic, hence the “f”).  The blurb calls it: “A love letter to Palestine, the land and its people, Falastin is a journey through Sami’s homeland. Get an unparalleled view into this beautiful country and its food, with recipes that have been handed down through the generations.”

I started with an entirely vegetable-based meal after we’d had a run of rather too much red meat. The dishes that caught my eye were the rice with yogurt and roasted cauliflower with fried garlic offering. The first run made it obvious that there might be a slight issue with quantities. The recipe supposedly served 4 as a main. Maybe, if those 4 were Palastinian manual workers. Not if they were 60+ year old office working women. It took us three meals to work through most of it and I still had a large quantity of rice left after that (it fried up as a sort of squishy arancini and was tasty), but by then we were both a bit bored with it, and ideally you don’t want to reheat it because what you end up with will become mushy with a second heating. Look closely at the quantities is my warning to you!

The next thing I made was the Sfiha, a sort of middle-Eastern pizza, if you like. They are described in the book as an open meat pie, with a lovely doughy base. There’s a vegetarian version made with cauliflower, but I had some leftover mince from another dish and decided I would go with the meat version. There’s a generous amount of turmeric in the dough which makes it a glorious shade of yellow, and the mince is spiced and studded with pine nuts. The dough was quick and easy to make and the whole thing came together really easily. Again, I would make these again, especially as a handy quick lunch dish. 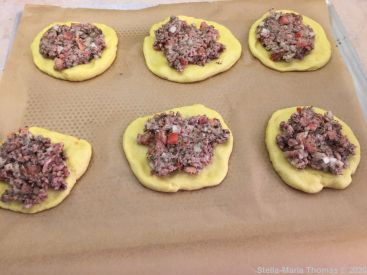 Still in a baking mood I next tried the za’atar rolls, which are stuffed with little cubes of feta cheese and topped with sesame seeds and nigella seeds (the other ingredients are fast-action dried yeast, Greek yoghurt, plain flour, milk powder, sunflower oil, fresh oregano and dried za’atar – and yes I did use my own). Once again the dough is coloured (and flavoured) with turmeric. Once again they were so easy to make. They also warmed up nicely on other days which was just as well because I had 12 of them once I’d finished the recipe and although they were small, they were very substantial! 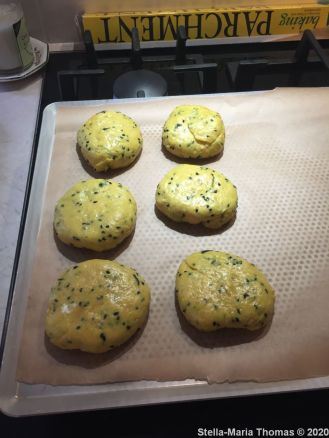 Some of the rolls were served with batatas bil filfil (a dish of new potatoes roasted with tomatoes, olive oil, garlic, cumin seeds, coriander seeds and dressed with lemon juice, lemon zest, dill and coriander – it’s a lively mouthful that makes the potatoes sing) and a thoroughly mind-blowing and delicious prawn and tomato stew with coriander pesto. The pesto was more of a sauce, but that aside it’s a recipe that works well and the result is massively tasty.

For the coriander pesto 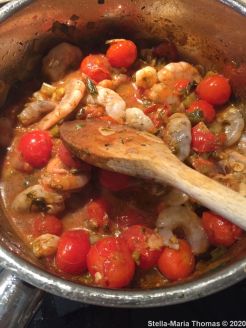 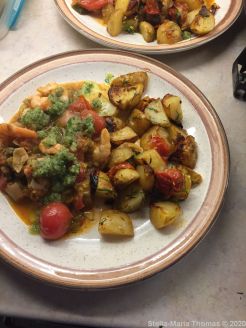 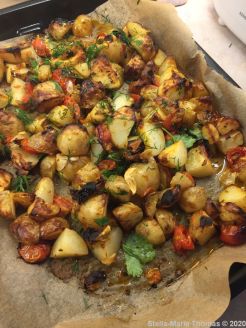 My final shot that month was to make Red Shakshuka for breakfast one Sunday morning. Again it was a very large dish when completed and more than comfortably fed two of us. I had planned to make it the weekend before but was stymied by the need to first make up the required shatta. This comes in either red or green depending on the colour of chillis you opt to use. I went for green. The book informs me: “This fiery condiment is as easy to make as it is to become addicted to. Shatta is there on every Palestinian table, cutting through rich foods or pepping up others. Eggs, fish, meat, vegetables: they all love it. Our recommendation is to keep a jar in your fridge or cupboard at all times.”

That completed, it was time to make the shakshuka. This too comes in a red and a green version. I used the green method, but the red ingredients, because it kept the eggs whole, while in the green one they were scrambled. Lynne doesn’t like scrambled eggs much so it was a good compromise.