About 18 months ago I thought I’d found the perfect recipe for a German-style plum cake and I made a post about it with the intention of giving it a go if I couldn’t access the German Bakery on their van’s Tuesday visits to the City of London. It’s a cake I have been obsessed with for a very long time, probably since I first went to Germany in 1966. My Dad was also obsessed with it, and spent a great deal of time in pursuit of the ideal plum for the cake. I wish he was still with us, because he’d love this now I’ve further refined it, even with the “wrong” plums. The recipe was from the great cooking obsessive, Felicity Cloake, who tries all the likely recipes she can lay her hands on before settling on her own version using everything that works.

What with lockdown and working from home, and thus not being able to access the weekly appearance of the German Bakery van in London, and the closing of their business, the time had come to give it a go. The discovery of instant yeast seemed like an omen and so I gathered my ingredients and on Saturday morning I set to and began to bake. I wouldn’t have fancied trying this with the dried yeast that comes in sachets and never appears to have the slightest effect, but with the instant, that does not need to be activated in advance, it was an absolute doddle and it did what it says on the packet!

After that I got to thinking about apple cake, because everyone needs an apfelkuchen recipe. My thoughts appear in the note section of the recipe.

For the streusel topping: 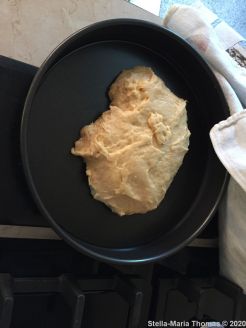 Note: Afterwards I got to wondering if this would also translate to an apple cake simply with a switch of fruit. I decided I needed to find out. Everything else works as written, but substitute around 4 good sweet crunchy eating apples for the plums. Core them, slice thinly and then place them on a tray covered with paper kitchen towels. Cover each layer of apple slices with a fresh layer of paper kitchen towel and set them aside until you need them in Step 3.  They will dry out enough to prevent them making the dough soggy. The end result was very succesful, the base dough good and firm, and the fruit sweet but still with a little crunch to it.