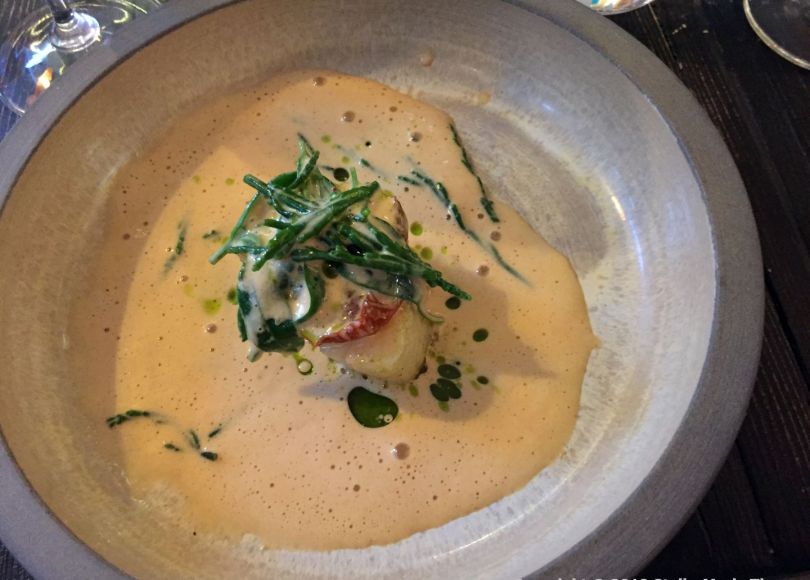 “Harden’s Invites you to Dinner with Adam Handling at The Frog Hoxton“; that’s what the email said, coming through on the heels of our visit to the most upmarket of the Frog outposts in Covent Garden. We thought it would be interesting to see what the original (well relatively original) restaurant over in the dreaded hipster haunt of Hoxton would be like. It’s fair to say that each of the Hardens Invites events we’ve been to over the years have been very different, the establishments in question varying as to how smoothly they can cope with around 50 – 80 people sitting down all at the same time. The clear winner on that count is Le Gavroche, where both times it’s been so smooth you’ve had to wonder how they do it! Our first le Gavroche event though was almost enough to spook us out of doing any of them again after we ended up seated next to the world’s most irritating man, a self-described “property developer” who seemed to annoy even the poor woman he was married to. I’m glad we persisted though. 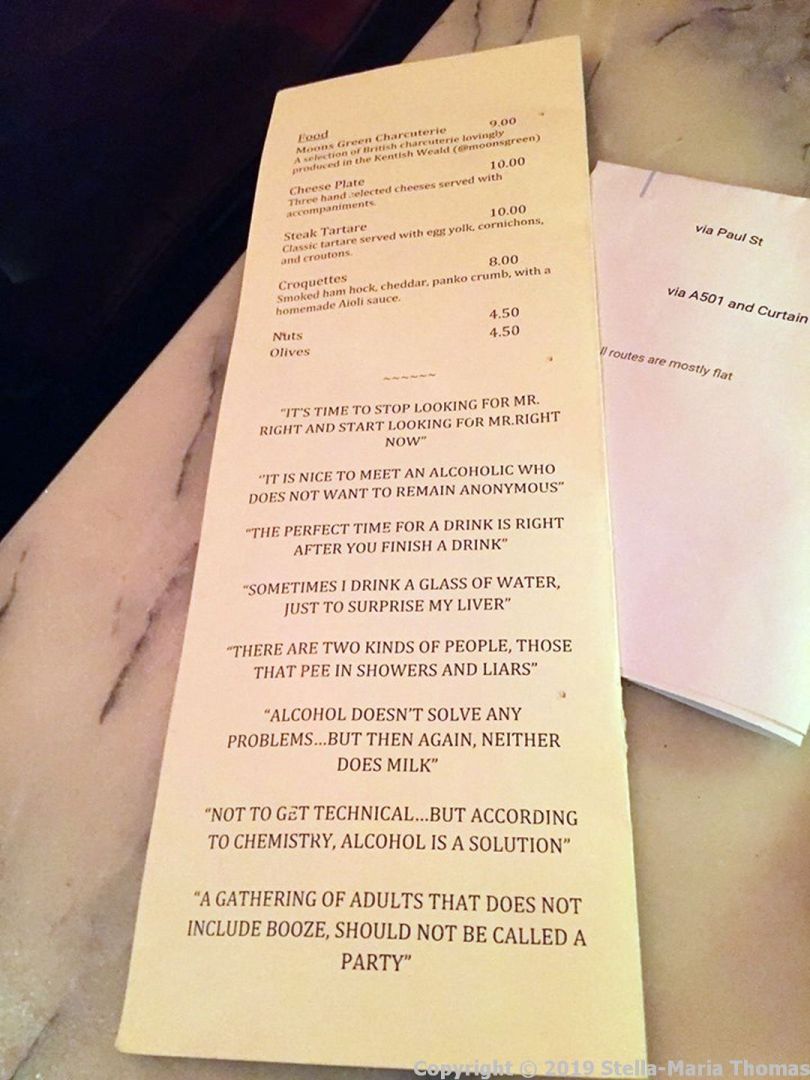 First however, we needed to meet up. And where do you meet up in Hoxton Unless you want to drink in a grungy pub anyway? Well the answer seems to be a tiny basement cocktail bar called Happiness Forgets. It’s hard to find, not having any obvious signage until you get right up close to it, but it’s below a restaurant/bistro called the Petit Pois which you need to use as a guide to navigation. I made my way from the brilliant sunlight outside to the Stygian gloom of the bar, having to stand for a couple of minutes waiting for my reactive glasses to change so I could see anything, and was then warmly welcomed to the small seating area set back from the bar counter. The sound system was playing blues music, the air conditioning was effective without being obtrusive and an interesting short list of drinks.

I opted initially for a Jerezana, which consisted of a mix of sherries, sweet and dry vermouths, orange bitters and a large shaving of orange peel. It was a short but sweet drink, with a distinct hint of orange oils running through it and I could have knocked a couple more back if it hadn’t seemed like a bad idea given I hadn’t eaten much all day. 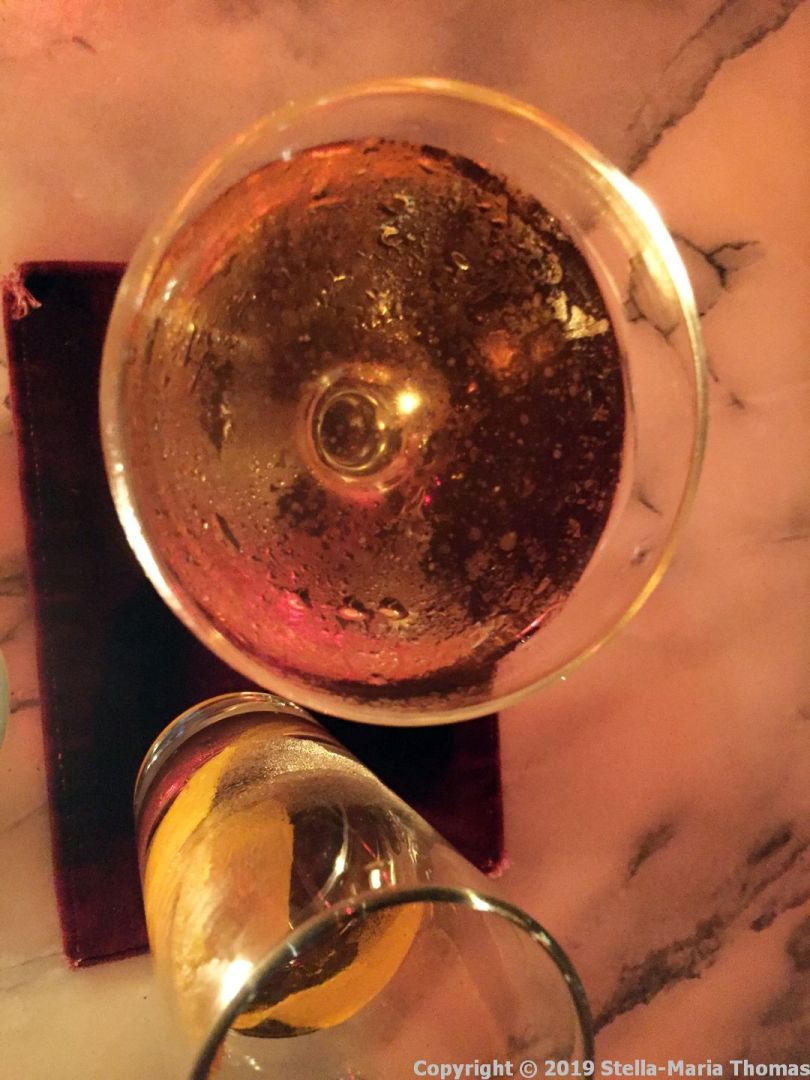 Instead, when Lynne arrived she opted for a Jerezana, while I moved on to a Bell Journey, made with 10 year old Bourbon, red peppers, celery bitters and a dash of Pedro Ximenez sherry, all served on the rock rather rocks, an appropriate description given it was a frankly massive chunk of ice!

A final choice was a glass of cremant, though I have no idea where from and they weren’t admitting anything. It was a bar I really liked, from the welcoming staff to the frequently refilled glasses of water that we didn’t even have to ask for. Alright, so the place was full of bearded hipster types, but I’ll not hold that against it; that’s just the neighbourhood. I would certainly go there again if I was in the area.

So what did I think of Frog Hoxton? I’ll get the biggest bugbear out of the way right now. As people get older their hearing becomes less acute, and it was so damn noisy in there (open kitchen – well, pass anyway) and I could hear the people seated either side of me reasonably well, but not Lynne who was on the other side of the table. It was even hard to hear the waiters as they set down and explained dishes. So I probably wouldn’t go back, though it’s no fault of the food, which was good with side-steps into excellent, especially given the premise of it being a “‘Biodynamic’ and Sustainable Midsummer Feast”, and also being the lowest priced of any of these dinners so far (at £90 per head including canapes, wine and four – if you didn’t count the canapes – courses).

We arrived in good time, were shown down to The Iron Stag bar in the basement, and were, as usual, served generous glasses of Gusbourne Blanc de Blancs – 2013 which is pretty much the go-to choice at both these events and the Sitwell supper clubs these days. I suppose if it’s good enough for HM the Queen, it’s probably good enough for the rest of us as well.

entually the main part of the evening was announced and we were shepherded up the stairs to the dining room and kitchen, where a couple of treats awaited us. One of these was one of Adam Handling’s signature offerings, the very fabulous bread with chicken butter, which really is wonderful, the butter awash with chicken jus with genuinely crisp. crunchy crumbs of chicken skin scattered generously over it. The gentleman next to me gave every indication of wanting to just eat the leftover butter with a spoon, except his wife wouldn’t let him. I couldn’t blame him; it really is the definition of an umami hit and delivers on all levels. Also delivered to the table at the start were plates of cheese doughnuts, perfectly spherical, crisp on the outside, the dough sweet, with a molten core of cheese, the whole buried under drifts of finely grated cheese. I want to eat one of these every day for the rest of my life! I also want to see if it’s possible to make a home-made version without getting in an unholy mess. They are just that good! 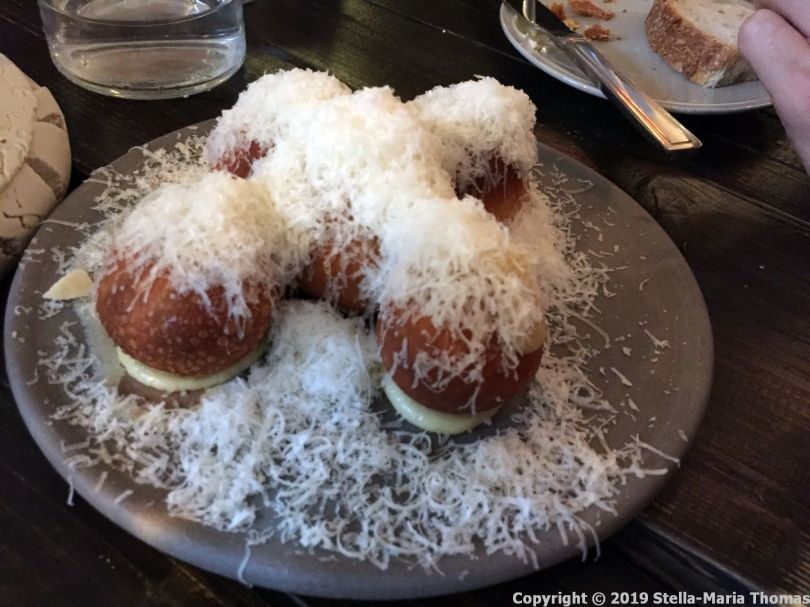 We were served another round of the sparkling Gusbourne to go with it, before the main menu and matching sustainable wines began in earnest. It’s been a while since Frog in Covent Garden but one of the truly memorable dishes on that occasion was “Mother”, a dish apparently created when Handling’s mum, who he says is a “choosatarian” announced on the day he opened his first restaurant that she had become a vegetarian and he had to quickly create something she could eat. It’s very good indeed, a slow roasted celeriac, served with cheese infused with summer truffle, apple matchsticks and dates. This one was smaller than that, and I didn’t feel quite as balanced as a result with maybe too little celeriac and too much of everything else, though it was still enjoyable. It just didn’t quite hit the heights that the one in March did. With the celeriac we drank a Pinela Guerila 2017 from the Vipava Valley, in Slovenia. There are suggestions that Pinela is an indigenous Slovenian grape varietal, but the Italians also claim it as one of theirs, so presumably it’s made a break for it as the vineyards in Slovenia as close to the Italian border and the town of Trieste. I quite liked it but wasn’t too convinced it worked with the celeriac as well as it might have done. I just felt it was a little too dry, despite the acidity, which didn’t seem pronounced enough to cut through the richness. In fact a sweeter wine might have been better for my tastes.

The next dish absolutely hit the spot, a perfectly judged – and cooked – piece of cod, served with sea herbs, and pickled lobster, the latter just a note of intense seafood sweetness with a kick that threaded its way through every mouthful. I’d have liked more of the cod, though on another day when I wasn’t going to be eating a meat main course straight afterwards. The extremely good bread was ideal for mopping up the creamy, rich sauce and I just managed to stop myself asking for more by instead requesting a spoon! It was accompanied by a Cabernet d’Anjou Rosé 2017 from Château la Tomaze in the Loire Valley in France which was a lovely, fruity and really nicely balanced wine, made from Cabernet grapes – a combination of Cabernet Sauvignon and Cabernet Franc. It was, as you might expect, slightly – but only slightly – sweet and went very well with the pickle-inflected fish.

The next course had been visible in preparation in the kitchen area when we sat down. It was a delicious lamb Wellington, wrapped in a dense almost sausage meat like exterior coating, then enveloped in excellent pastry, crusted with what I think were nigella seeds. It was strongly flavoured, moist and lovely, seasoned with mint and with smears of carrot puree. We were also given plates of fermented fennel, BBQ beans, house pickles, and BBQ potatoes, much of the accompanying food a reflection of the no-waste policy the restaurant group pursues as actively as possible. Vin de Pays de la Drôme IGP, La Re-nommée 2016, from Domaine Lombard, Northern Rhône, France. It’s an interesting blend of 90% Syrah and 10% Viognier, a red wine grape and a white whine grape, and used to be very specific to this part of France (though it has now spread to other growing regions). It’s excellent with red meats in theory and it turns out in practice as well, with red fruits but a fresh aspect to it as well, with light tannins and a lingering spiciness. Lovely! Sadly they only produce a few thousand bottles a year so getting hold of it might prove a bit of a challenge.

The final course was a decorative plate of various sweet things, a lemon verbena posset, fresh strawberries, a basil sorbet that was intense in the extreme both in colour and in flavour. It went so well with the softness of the posset and the strawberries, and I got quite sticky trying to deal with it. Would I eat it again? Oh yes! The wine with it I would also drink again at the drop of a hat. We had a 2016 Riesling Cordon Cut, from Mount Horrocks, Clare Valley, South Australia which was everything you could ask for in a Riesling that has been subject to botryitis, a classic of the type with a deep sweetness, citrus, lime and orange blossom, apples and minerality. It would appear to be almost impossible to lay hands on any now, and I really can see why. 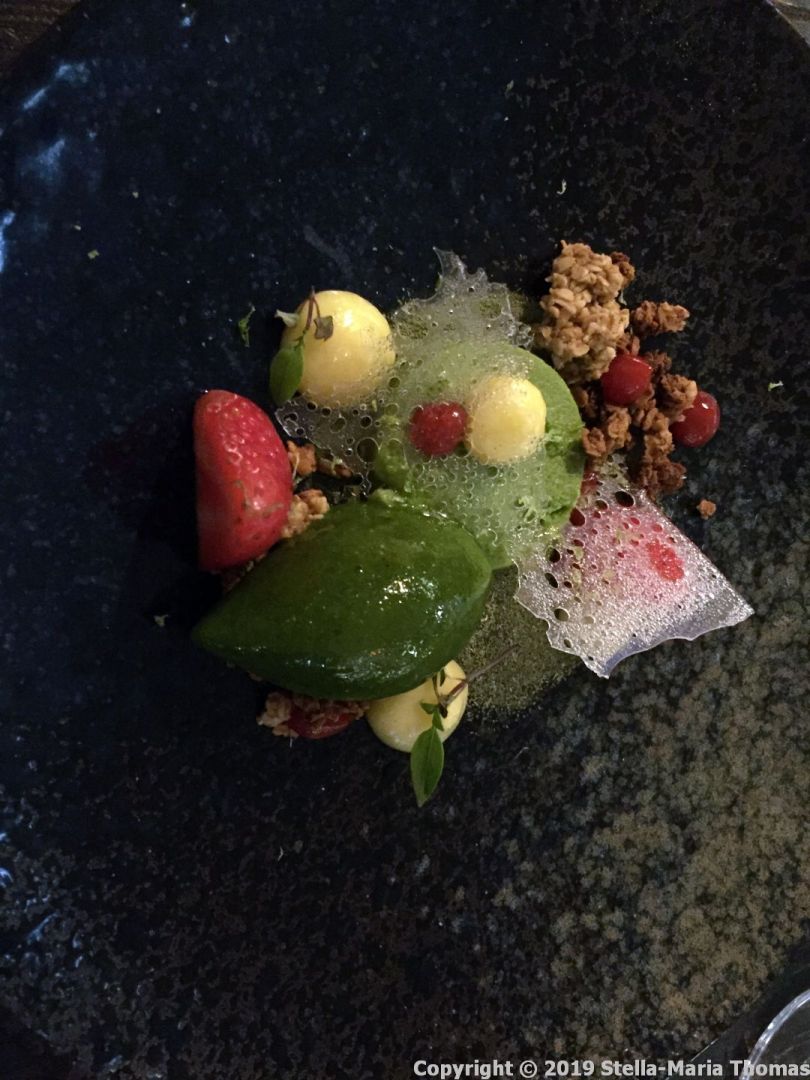 There followed a relatively short Q&A (some of the diners appeared to lack either the confidencd to ask a question or the imagination to think of something to ask, which meant I ended up asking two questions to try and keep the thing moving along) and then it was time to try and get a train home. We ended up on the very slow train that gets in around 2 minutes ahead of the last very fast train of the day because who wants to hang about Euston Station for 45 minutes at that time of night?